I had ridden a camel. I had bashed dunes in an SUV. I had seen belly dancers. But I had never watched a falcon get a pedicure — until this autumn at the Abu Dhabi Falcon Hospital.

The hospital’s tour, offered most days and narrated in English, is a window on Middle Eastern desert culture. Falconry, the use of raptors to hunt, is an ancient tradition that survives to this day.

During the pedicure on a sedated bird, about a dozen other birds, tethered to perches, waited for their own pedicures, feather repairs or other care. They were hooded to prevent them from attacking each other.

Margit Gabriele Muller, the hospital’s executive director, said that, to protect endangered birds and local prey, Emiratis could no longer capture wild falcons or hunt locally. Therefore, she said, the United Arab Emirates issues falcon passports. A ring with a unique number is attached to each captive-born bird; that number appears on the passport.

Nowadays, on carriers like Etihad and Emirates, a falcon with its owner flies as an airline passenger, uncaged.

I visited the falcon hospital on a press trip sponsored by Abu Dhabi’s Department of Culture and Tourism and its partners. Our hosts sought to highlight Abu Dhabi’s culture plus its luxury product while pulling it out from the shadow of its better-known UAE neighbor, Dubai.

Luxury infuses the Kempinski-operated Emirates Palace, which at certain times houses all the UAE’s seven emirs in humongous suites. The hotel, with palatial fittings and extensive grounds, has become a tourist attraction in itself.

Visitors can sample the cappuccino topped with 24-karat gold flecks or ice cream made with camel’s milk, also topped with gold.

The Park Hyatt Abu Dhabi, our five-star residence for two nights, impresses in quite different ways as a spectacular beach resort with unique ecotourism themes.

Opened in 2011, the Park Hyatt has 306 units, each with balconies and measuring 538 square feet minimum. All have bathrooms with oversize bathtubs and rainfall showerheads. Suites and villas have plunge pools.

Starting rates for a Park Room without breakfast vary seasonally from about $190 to $405.

The Park Hyatt’s restaurant/bar areas include a signature dinner spot and an all-day dining outlet, both with show kitchens and other architectural statements. The Library, smart with orange-leather walls, is a tea lounge. My favorite was the detached Beach House, which, with views of sea and sand, highlights Mediterranean foods with a welcoming casualness.

For other pursuits, the hotel’s location is key. Abu Dhabi, the UAE capital, sits on an island on the coast of the Emirate of Abu Dhabi in the Persian Gulf.

The Abu Dhabi metro area comprises other islands, including the recently developed Saadiyat, location of the Park Hyatt.

The hotel accesses six miles of pristine beach on the gulf, one of the UAE’s best beaches. But, said Farrah Fernandez, the hotel’s marketing communications manager, American guests often have other interests, such as ecotourism, golf or, in November, Abu Dhabi’s Formula 1 auto race.

On the ecotourism front, the hotel’s beach abuts Al Saadiyat Marine National Park, which extends more than a mile into the gulf and protects endangered hawksbill turtles. Arabella Willing, the hotel’s marine biologist, said the turtles nest on 17 Abu Dhabi beaches, including Saadiyat.

Throughout nesting season (March through August), she leads volunteers on sunrise nesting patrols to keep tabs on the animals and rescue lost hatchlings.

Also during the nesting season, the hotel keeps lights off (or uses red light, which doesn’t bother the turtles), and there are no lively beach events. Water activities are nonmotorized.

The hotel offers boat tours to the area’s protected mangrove forests, a vital ecosystem that is good for birdwatching. Guests might also see dolphins during these outings.

For duffers, the hotel offers the nearby Saadiyat Beach Golf Club. Its lake is another birder haven. Further, around 40 gazelles live on club grounds. 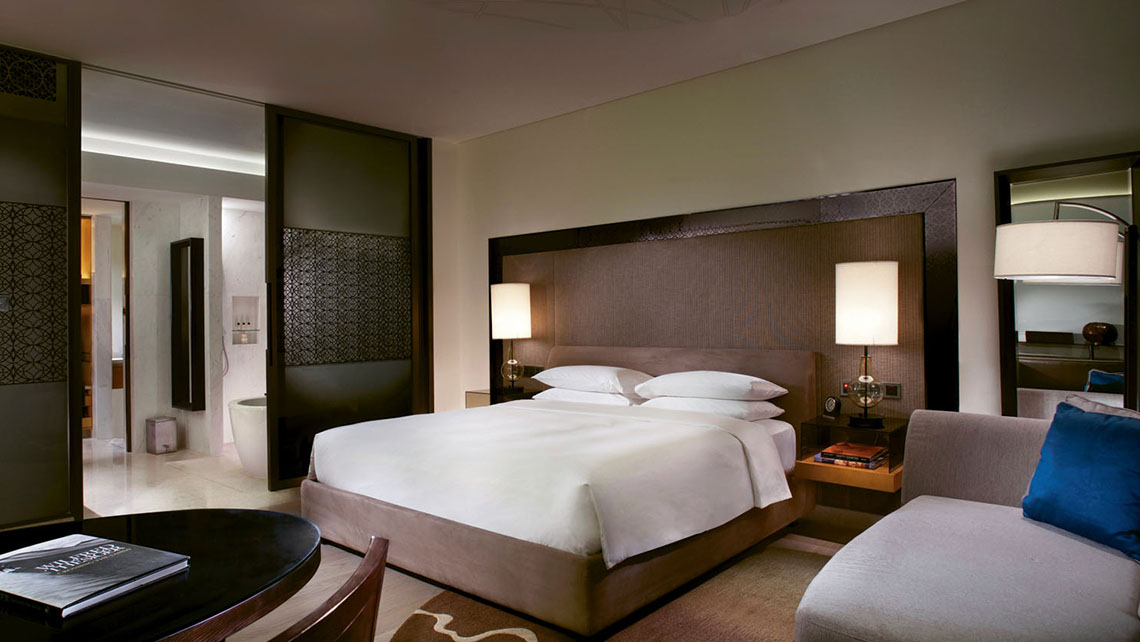 The Louvre Abu Dhabi, opened November 2017, sits on a man-made extension to Saadiyat Island. It’s part of an ambitious project to make Abu Dhabi the UAE’s cultural hub and, in the process, differentiate Abu Dhabi from neighboring Dubai. The Zayed National Museum and a Guggenheim are meant to follow.

The Louvre is stunningly presented at waterside. It’s a collection of white, rectangular buildings inspired by traditional medinas and topped by a steel-and-aluminum dome designed to imitate overlapping palm fronds, which lets in light while offering protection from the sun and heat. Inside, exhibits address a sweeping portion of human history and its art, with works from prehistoric times to the present. We used interactive tablets for self-guided viewing.

Our trip wrapped up with another must-see, the Sheikh Zayed Grand Mosque, a riot of white domes, pillars, minarets and marble plus what may be the world’s largest handmade carpet.

The Department of Culture and Tourism ran joint promotions with Collette in 2017 and this year added Gate 1, Goway Travel, Indus Travel and SmarTours. All have packages that include Abu Dhabi.

Although none have been named, the department plans to double the number of joint promotions in 2019. Through August, the department reported, 125,353 Americans overnighted in the emirate, up 26% over the same period in 2017.