I wasn’t sure who was most surprised to see us: the funeral party, the king wearing a red bobble-hat or the herd of hippos. We didn’t bump into them all at the same time – that would’ve been really weird – but they each formed a memorable encounter during my week travelling around Guinea-Bissau.

This small, welcoming and, yes, safe patch of West Africa – a former Portuguese colony, and now a land of tribal kingdoms and sacred islands – delivers a daily dose of the unexpected. And not just for those passing through.

Tourists are a novelty in these parts. Almost everywhere I went – every village, market, church and beach – resulted in quizzical glances, curious conversations and high-energy displays of hospitality. 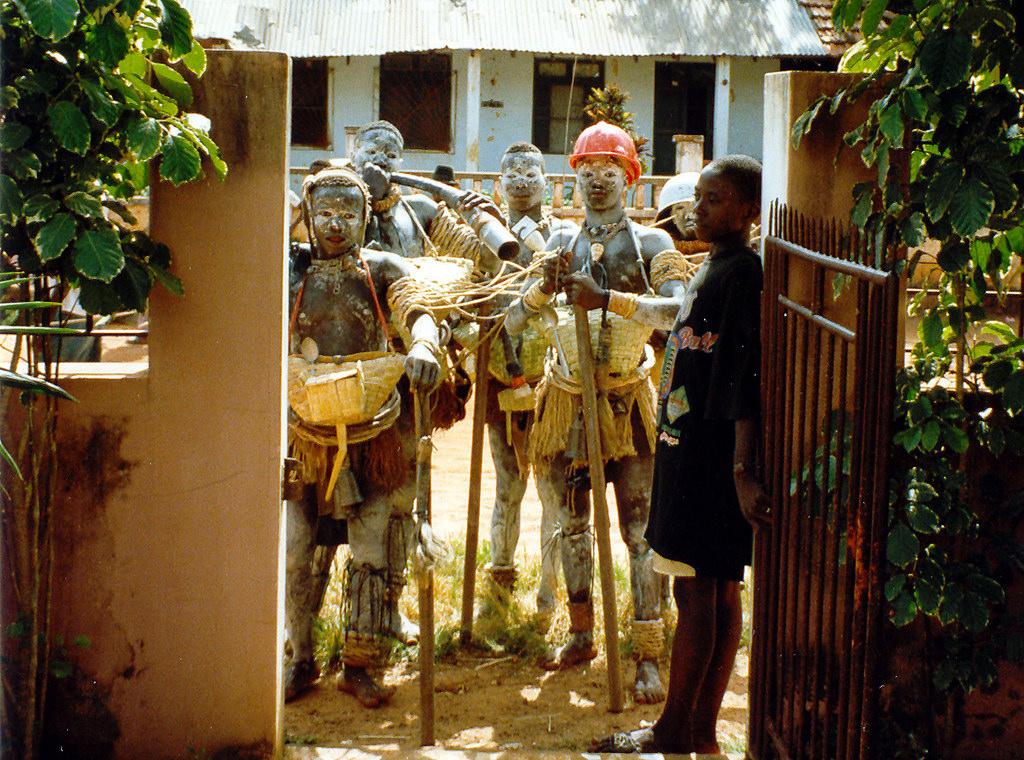 West Africa hasn’t had the easiest of times. Lacking the big game parks that draw visitors to other African nations, the region has always been a niche holiday destination. The shores and resorts of The Gambia have attracted decent numbers, while others opt to holiday on the waterways of neighbouring Senegal and a few trickle south to Ghana – but that’s about it. Even this modest tourism was hit hard with the outbreak of Ebola in 2014, spelling an end to overseas visitors almost overnight.

Despite cases only occurring in a handful of West Africa’s 16 countries – and not a single one in Guinea-Bissau – the aftermath of the scare was felt far and wide.

“There are many misconceptions about this place,” my guide, Augusto M’Tambe, explained. “People think it’s dangerous and full of disease but it’s not.”

To discover the truth and experience a corner of the world slowly remerging from the darkness – though political difficulties remain in a country that has experienced nine coups or attempted coups since 1980 – I joined a group of intrepid-minded travellers on a new tour offered by Explore Worldwide. The plan: to travel south from the busy capital, Bissau, for several days sailing around the sacred Bijagos archipelago, a sprinkling of untouched, off-shore islands in the Atlantic – steeped in age-old traditions and home to some very unusual residents.

Before we set sail, however, a long day on bumpy dirt tracks beckoned. The ruler-straight road, lined with giant trees with twisted limbs, shimmered long into the hazy distance. The dusty town of Canchungo was in mourning when we arrived unexpectedly.

We had only intended to make the briefest of pit stops, to buy a bottle of the local tipple cana – a rum-like spirit with sugar cane and cashew nuts – as an offering to the local king we would soon meet. “You never go empty handed,” advised Augusto. But the need to source gifts was swiftly sidelined as we stumbled upon the most private of gatherings.

The dearly departed had been laid to rest and the sniffling funeral party – many wearing T-shirts featuring the face of the deceased – had congregated in a sandy square just off the main street. Heavy-set women in bright and colourful tribal dresses cried into their hands but the sobbing paused abruptly upon sight of this group of out-of-towners. 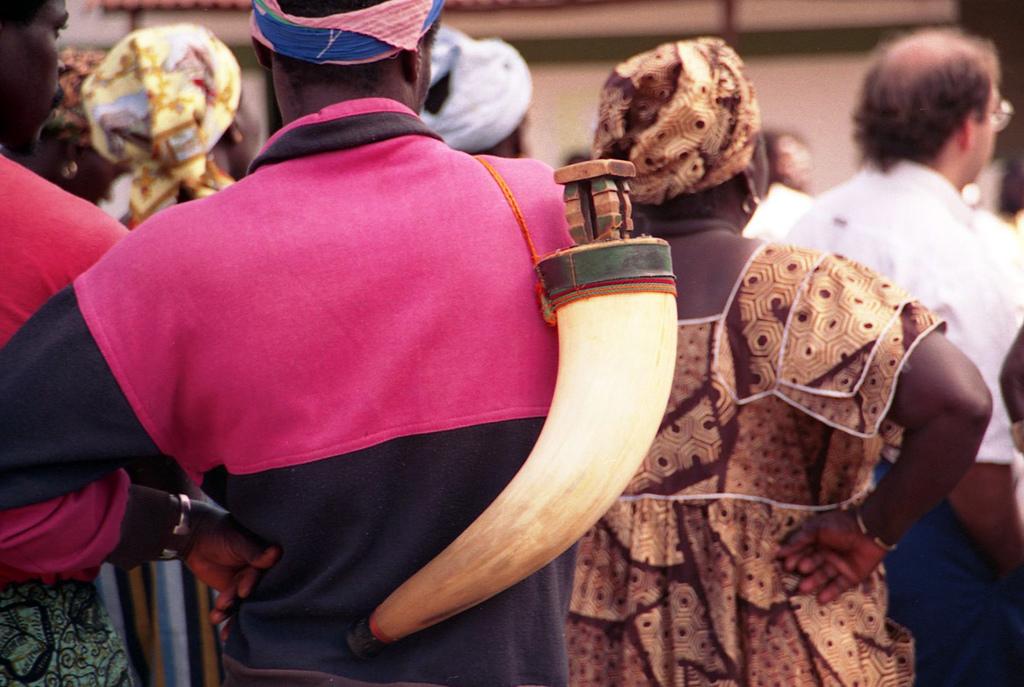 We stood on the fringes, shifting awkwardly in the dust, but the grieving family did not take umbrage at our presence. Instead they beckoned us to join them. But our intrusion felt inappropriate, so we offered our condolences and gently retreated.

And, so, onwards to the 88 Bijagos islands, a sprinkling of semi-tropical isles encompassing two national parks, a Unesco-listed biosphere reserve and the most important turtle nesting site in all of Africa. But its significance extends beyond the flora and fauna, with remote communities still governed by tribal chiefs.

After cruising through the largest mangrove forest in West Africa, spotting pelicans, storks and river dolphins, we stretched our legs on land at the village of Elia. At the end of a raised embankment made of crushed oyster seashells, which scraped underfoot like shards of shrapnel, was the Royal residence. 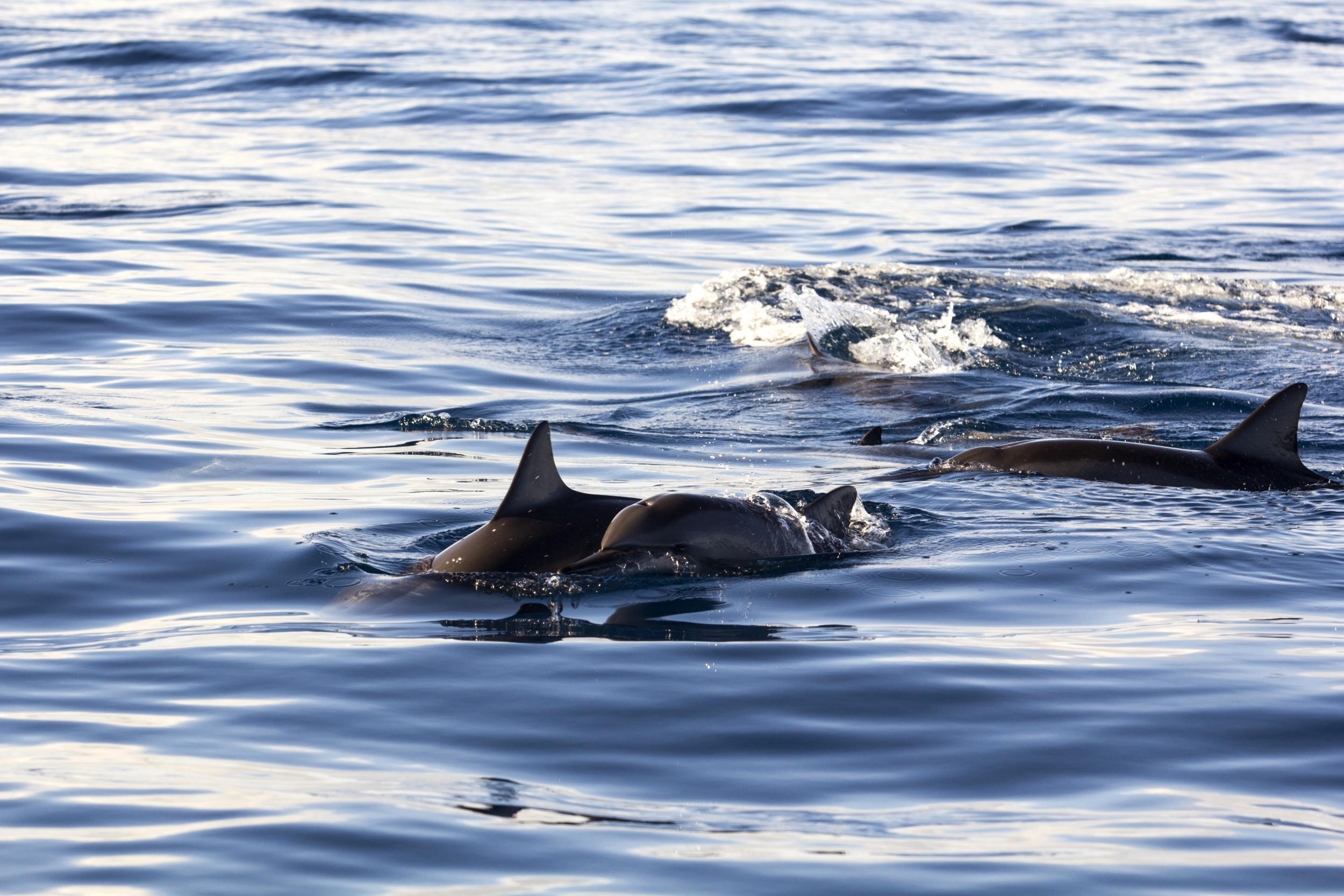 Less of a palace and more of a simple mud house, with low ceilings and iron pots placed over a crackling fire, it was home to King Gika Jata. A laconic man with stained teeth and long grey hairs dangling from his chin, he wore frayed shorts and a red bobbly hat in place of a crown. He came to power around 20 years ago.

“I can’t remember exactly when,” he said, his voice as low as a whisper and almost drowned out by the snorting piglets running around on the other side of the wall. We sat on wooden blocks and discussed his life. “I never expected to be King,” he said. “It’s a calling. The elders consult a fortune teller and the spirits choose someone with a clean heart.”

The next few days passed in a blur of ghost towns and age-old initiation ceremonies, including the menacing Vaca Bruto ritual, in which young men in heavy wooden masks modelled to look like bulls’ heads battled each other on all fours.

Bolama – all crumbling colonial mansions and grand houses now strangled by twisting tree trunks – served as the nation’s capital when the colonising Portuguese relocated it in a bid to escape malaria on the mainland during the mid-19th century. It remained the seat of power until 1941. Today, it’s a largely forgotten place with a modest population, most of whom seemed to be sitting in the shade in the main square near a statue deposited by Mussolini when an Italian seaplane crashed nearby in 1931. 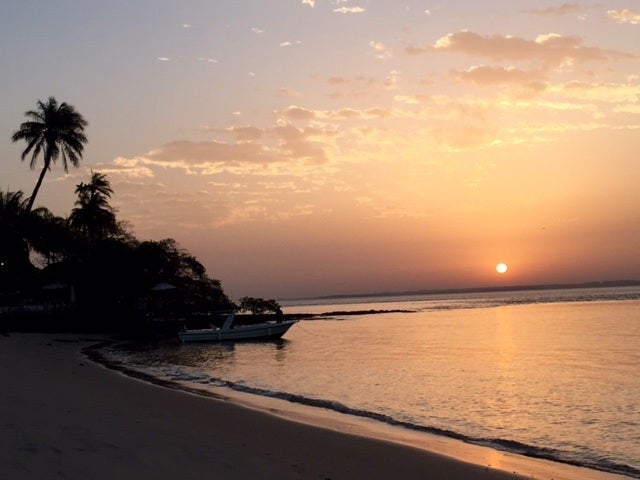 One of the archipelago’s southernmost islands is uninhabited Poilao, which forms part of the João Vieira and Poilão Marine National Park. Deemed a deeply spiritual place, the interior of the island – wild and untamed and a place for male initiations – is strictly off-limits to all but select elders and tribal leaders.

Luckily, though, the miles of sandy shoreline that border it are well used to receiving guests. Most nights between August and February, the beaches play host to green sea turtles who haul themselves across the sand to dig large nests and lay dozens of eggs. Reports suggest there are upwards of 2,500 reproducing females, some travelling from as far as Mauritiana, who come here to give birth on the same beach on which they were born.

We camped near the sand and stayed up into the early hours, until the unmistakable silhouette of a giant turtle emerged from the darkened ocean and sloped across the moonlit shore. We only returned to our sleeping bags after having helped rangers release thousands of newly hatched turtles, scurrying across the beach like marbles fleeing from a jar. 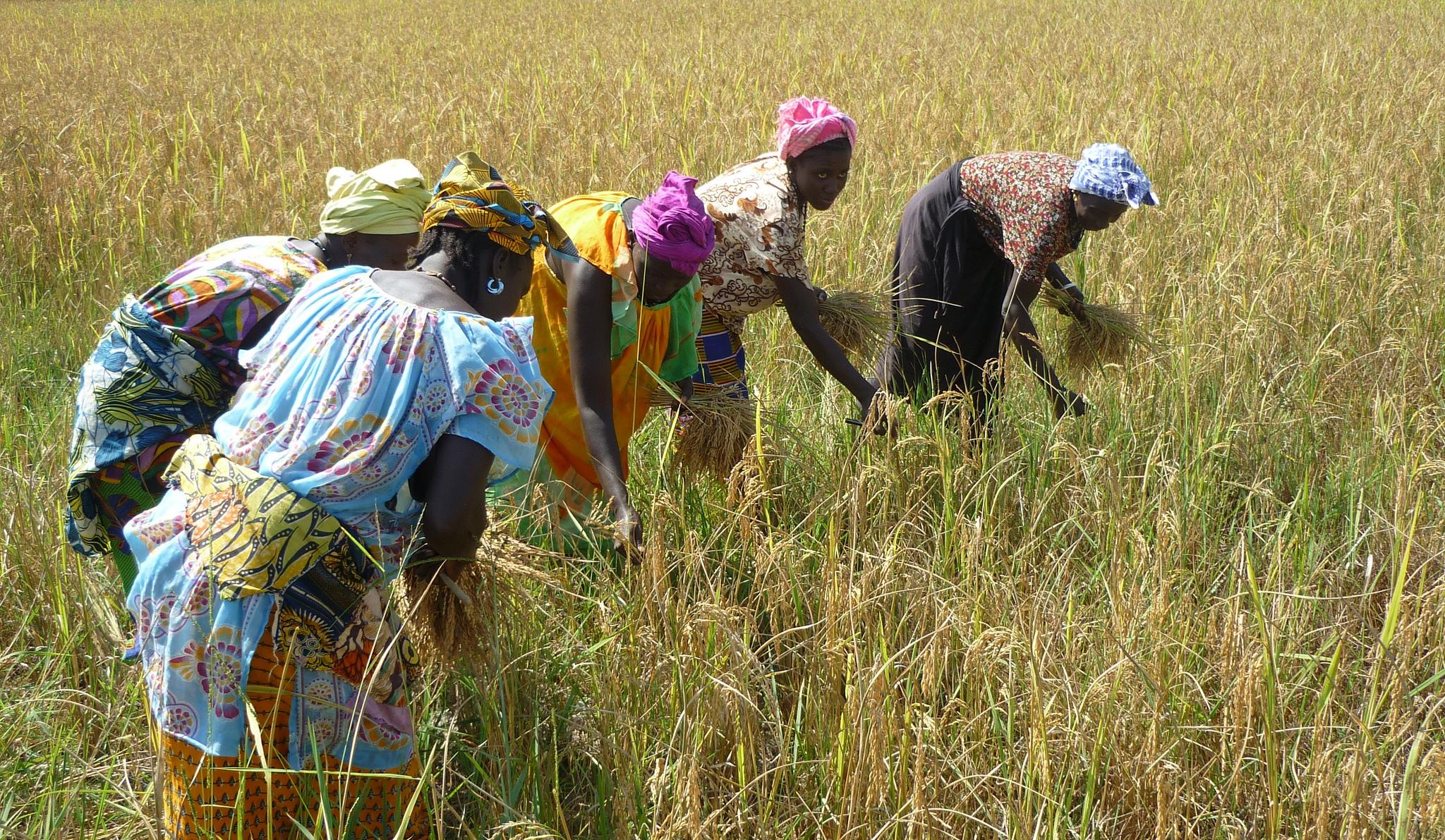 It didn’t come as any major shock that most of the accommodation in Guinea-Bissau leaned towards the basic. But our accommodation on the island of Rubane drew gasps. We docked at Ponta Anchaca Ecolodge after a long day at sea (the skipper got lost and without a GPS had to rely on passing fishermen for directions), and immediately settled down for a much-needed G&T at a bar built upon raised stilts by the infinity pool. The tide was out and the amber glow of sunset settled on a nearby row of small wooden fishing boats with patchy paintwork and names like In God We Hope. 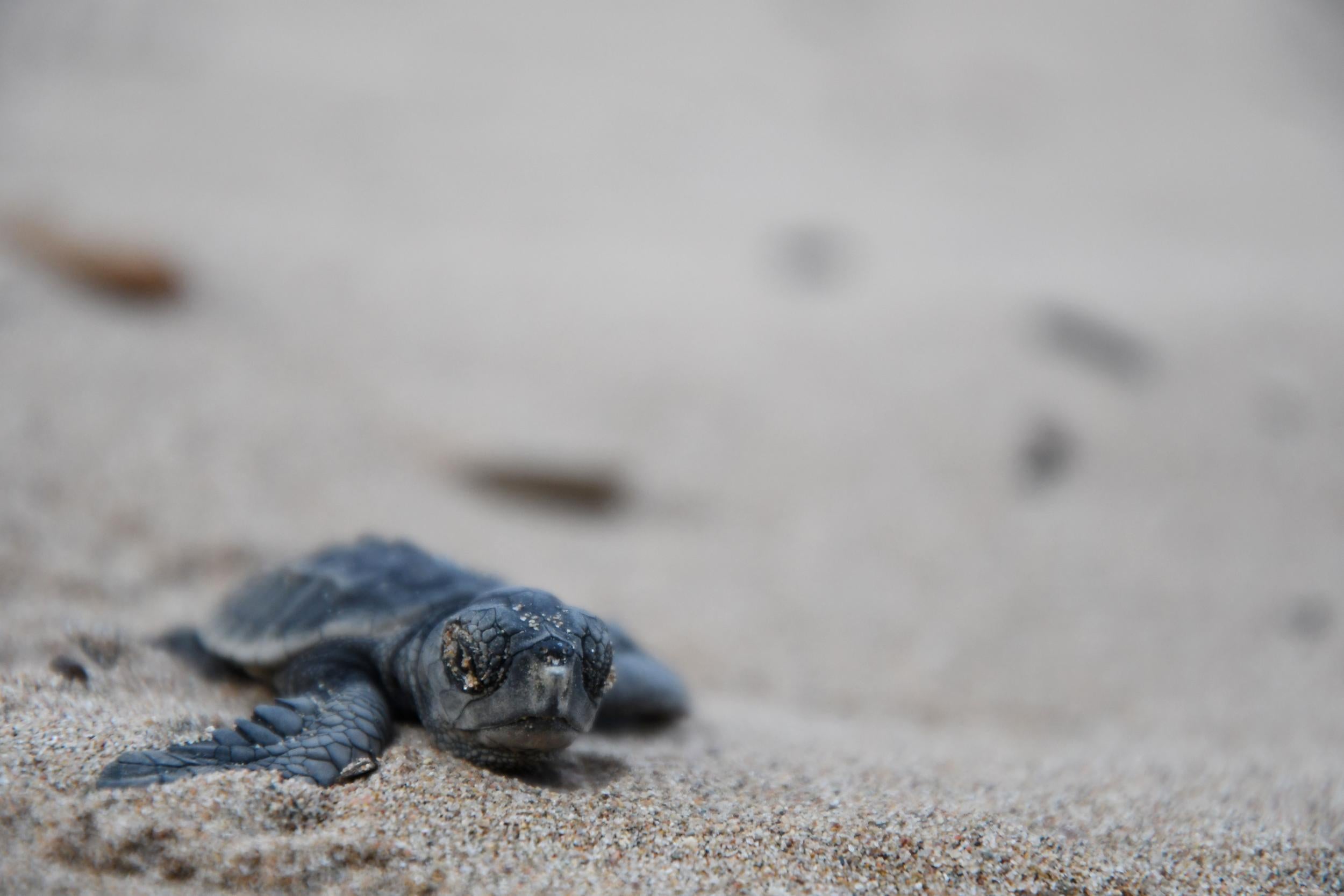 Hidden almost out of sight amid the dense foliage that backed against the long beach was a row of plush seafront lodges. Think thatched roofs, four-posted beds, rainforest showers and lots of African art; levels of luxury I’d dared not dream about.

But Guinea-Bissau had one final surprise up its sleeve. The rice farmers of Ilha de Orango are locked in a bitter battle with their fearsome neighbours. “They cause a lot of problems, ransacking the fields.  People have had to install electric fences,” said Augusto as we trekked through neck-high grass and across boggy marshes en route to see the ravenous rice-munching creatures in question: the hungry hippos of Bijagos. 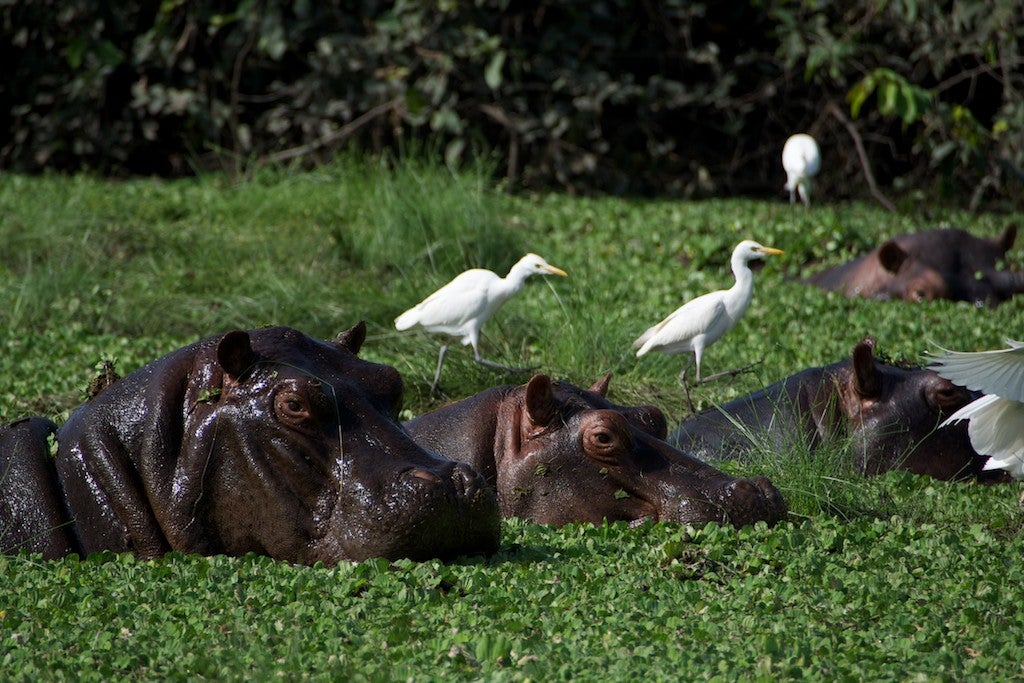 We eventually found a herd of the rare saltwater hippos – they inhabit the island’s swampy lagoons and are often seen strutting their stuff on the beach – after an hour’s sweaty hike. We huddled quietly, a little too close to the creatures for comfort, and watched as they wallowed in the mud, all louds grunts and giant yawns. They, too, eyed us with intrigue and suspicion before emerging from the water, prompting us to make a hasty exit. Surprises come in all shapes and sizes in Guinea-Bissau.