The slender branches bounce with shrieking monkeys and barking blue-faced hoatzin, a prehistoric avian throwback. Spider, squirrel and brown capuchin monkeys tight-rope along them in search of a fruity snack.

We watch them from the still of our canoe on Lake Chalalan – a vast pool of water rimmed by giant trees in the jungle of western Bolivia. 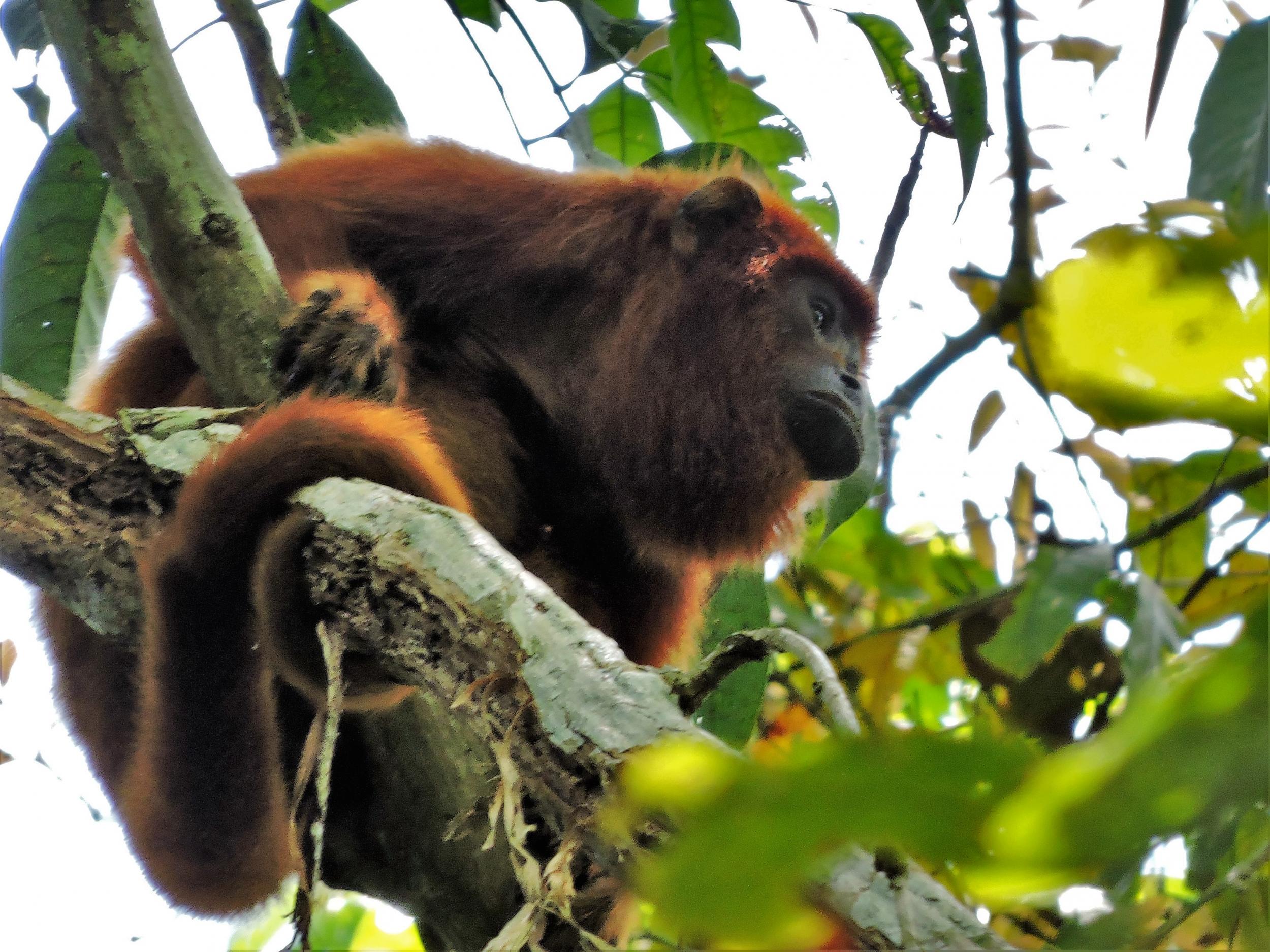 Out of the corner of my eye something was speeding towards us. A sleek, scaly caiman was torpedoing across the lake. This beast moved like the freshwater equivalent of the Jaws great white.

Ovidio, my guide, whispers: “Every early evening, the caimans trail the monkeys jumping about the lake shore in the hope that one of them might slip.”

I gulp at the thought.

We are deep in Madidi National Park, an area of 1.895 million hectares of South American rainforest, glaciers and Andean peaks bordering Peru. Its chart-topping stats hail it as one of the most biodiverse spots on Earth. There are more than 1,000 bird species, 12,000 plant species and 2,000 vertebrates, and it’s home to endangered wildlife and 31 indigenous communities.

I first visited this part of Bolivia 20 years ago when Rurrenabaque, the gateway town to the jungle, wore mud-lined streets. Back then, a story circulated of an Israeli tourist – Yossi Ghinsberg – who had gotten lost in Madidi for three weeks, but had survived.

I’ve never forgotten this legendary yarn. This autumn, Mr Ghinsberg’s harrowing ordeal reaches the big screen: Jungle stars Daniel Radcliffe, who plays the Israeli backpacker, and is based on Mr Ghinsberg’s book of the same name, written after he defied death in 1981. Reading about his story again, I wanted to go back.

He had been rescued by the Quechua-Tacana community of San Jose de Uchupiamonas, a small settlement of souls nine hours upriver from Rurrenabaque. His backpacking friend Kevin Gale organised a search party and he was rescued 21 days after he’d been separated from Mr Gale in a river accident. Their other two travel companions were never seen again. 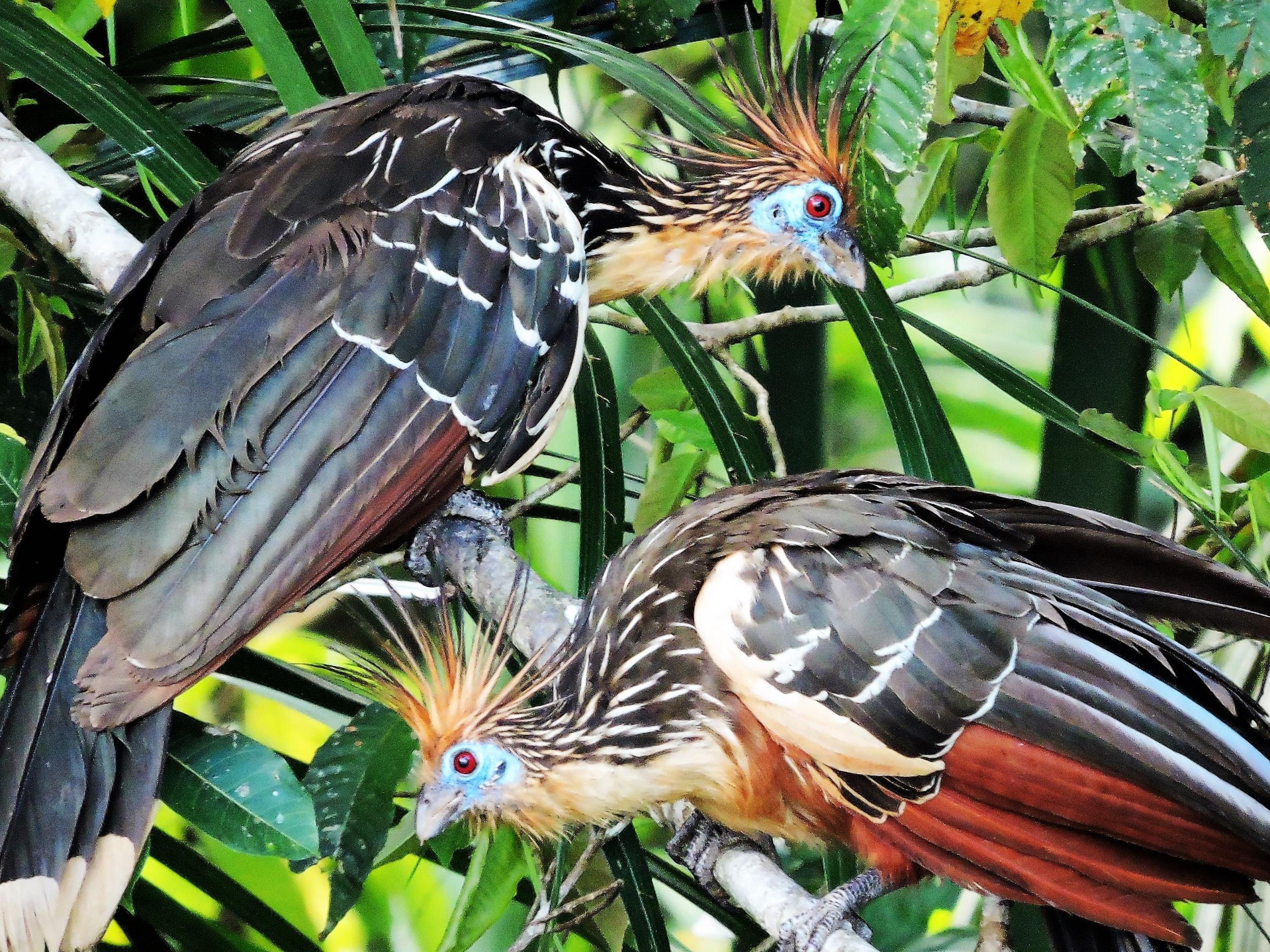 Mr Ghinsberg later learnt that the San Jose community were struggling to survive. Wanting to thank them for saving his life, he began working on securing a bank loan and beseeched NGO Conservation International to set up an ecotourism project, owned by the village, with profits ploughed back into the community.

Chalalan Lodge was born in 1999, and since then a secondary school and health clinic have opened – and other lodges have welcomed tourists in Madidi following Chalalan’s blueprint. Education and economic opportunities have seen students go to university and return to help the community, one that formerly survived on selling coffee and yucca before ecotourism. Most importantly, Chalalan’s general manager Rodrigo Mariaca tells me, the community were able to buy 210,000 hectares of land (Tierras Comunitarias de Origen) from the government, giving them the right to continue living on it and protecting it.

As I witnessed during my stay, Chalalan Lodge continues to grow. My smart mahogany en suite, designed in indigenous Tacana style, and other cabins are scattered in papaya tree-strewn grounds focused on the communal dining room next to Lake Chalalan. It takes five hours by boat up the milk chocolate-hued Beni and Tuichi rivers, and a two-kilometre walk inland, to reach the lodge staffed by the San Jose community. Recent additions include hot water and solar energy installation, two new boats, and new wooden bridges on the trails. 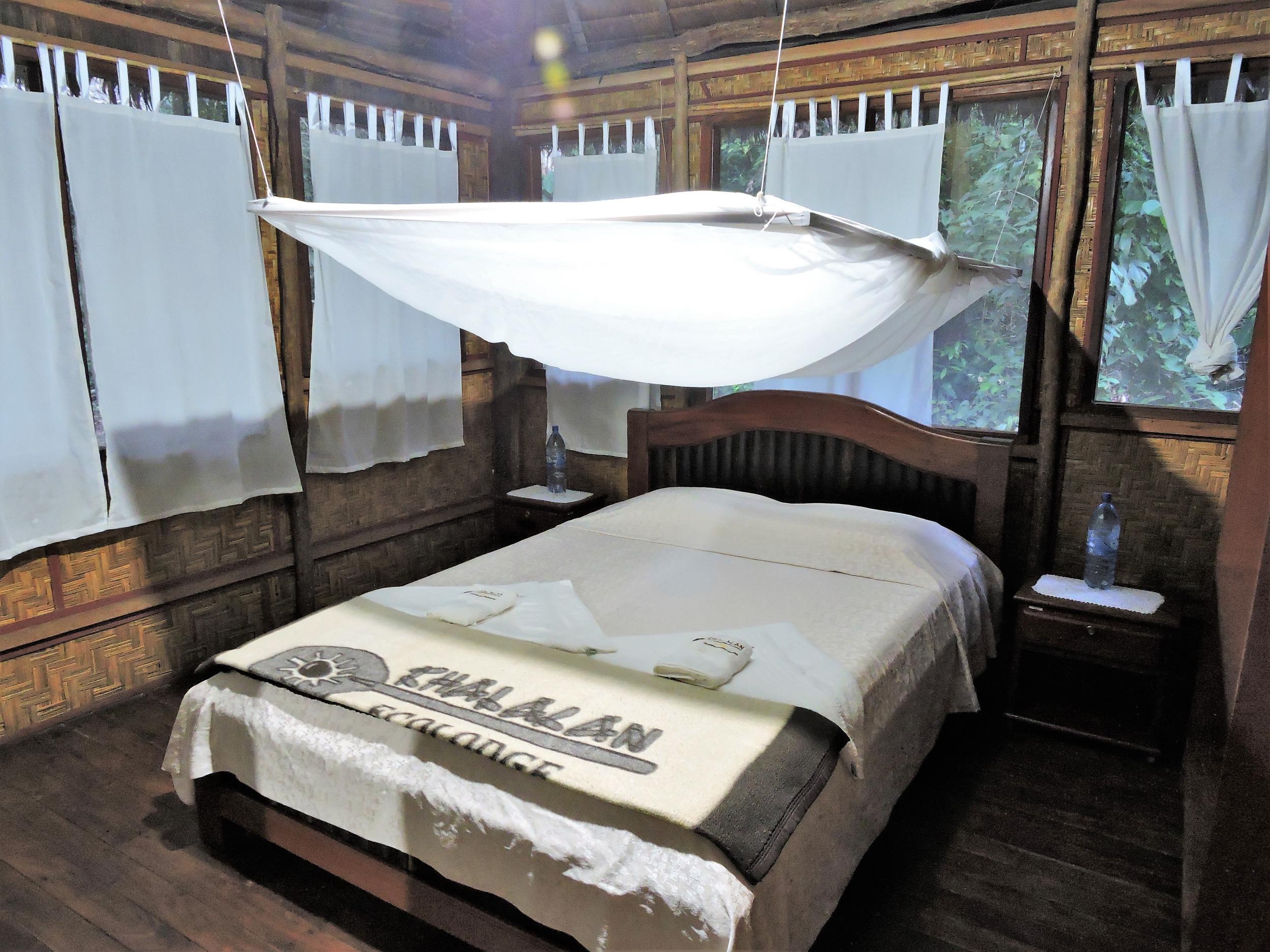 Ovidio Valdez Amutari, a son of the community, is my guide while we explore some of the 15 jungle trails. We set off just after 6am to make the most of wildlife spotting. Straight off we see giant anteater tracks, while above us military macaws screech continuously like a bunch of old gossips; in the distance, the roar of the howler monkey crescendos like a great storm brewing. We pass the giant graceful ceiba “king of the jungle” tree, flowers nicknamed “hot lips” for their shape and rouge, and a well-camouflaged yellow-headed turtle in the mud.

Ovidio spots a clearing busy with hummingbirds and pretty blue morpho butterflies where we can wait for the approaching monkeys while sitting on an upturned log. A great white hawk has a similar idea and spies the advancing troops on a branch above our heads. The primates roll in, only pausing to eye us at close quarters.

Trekking on, we come across tapir tracks, a jaguar paw print, and nude fungus (called monkeys’ ears) pinned to fallen logs. Then Ovidio motions for me to be still. There, amid the dense thread of branches, is a young marsh deer trying to outstare us. We don’t move and neither does he. That this endangered, beautiful honey-hued beast doesn’t scarper is a major positive for animal conservation.

Along the trail, Ovidio also teaches me jungle survival tricks – the kind of know-how Yossi Ghinsberg could only have dreamed about: the fig tree bark that cries white tears used by locals to stabilise fractures; the “cat’s claw” vine when cut leaks water; and the wild clove employed as anaesthetic for bare-bones dentistry. 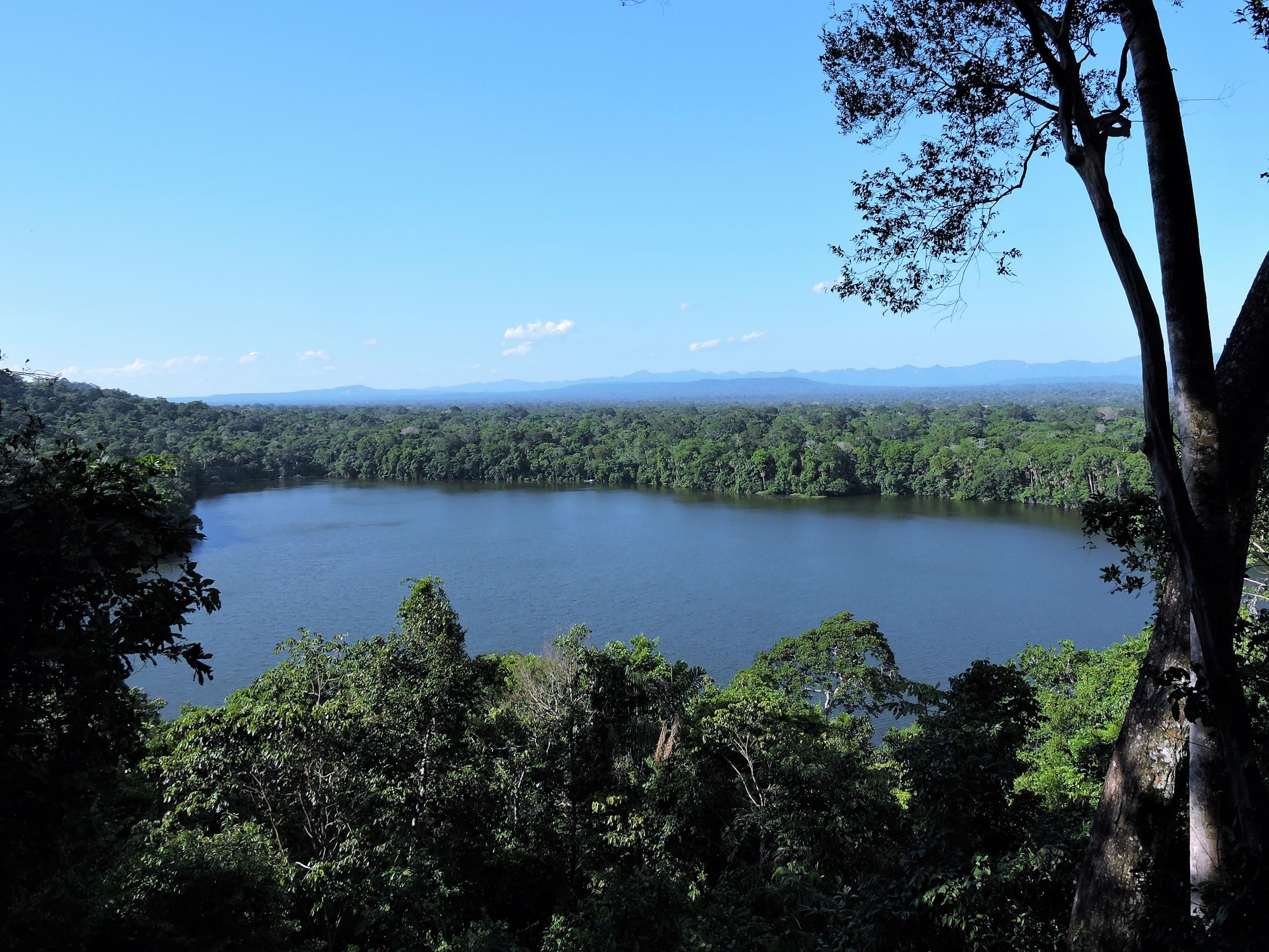 Back at the lodge, we tuck into three-course meals served up at the communal table where there is a chance to swap jungle sightings with other guests.

The next day, Lake Chalalan calls again and we canoe across to reach a mirador with tree-top views. The views of Madidi in the late afternoon sun are bathed in a treacly golden light. Pairs of red and green macaws fly overhead and the screaming piha bird calls for his one true love. Ovidio tells me: “Chalalan is a dream come true.”

But this dream is threatened, I learn. The Bolivian government’s proposed El Bala and Chepete hydroelectric dams would see parts of Madidi flooded and several thousand locals displaced. The fight is on to balance President Evo Morales’s expansionist plans with that of the conservation of threatened wildlife and indigenous community protection. Yossi Ghinsberg may need to step into the fray once again to ensure the survival of San Jose de Uchupiamonas and its human and animal neighbours.

Journey Latin America (journeylatinamerica.co.uk, 020 8600 1881) is the UK’s leading specialist in travel to Latin America. A nine-day holiday to Bolivia staying in La Paz and at Chalalan Lodge in Madidi starts from £1,948pp. The price includes flights, transfers, excursions, breakfast in La Paz and full-board at Madidi.