The Hotel Barriere Le Fouquet’s Paris might not be located in the hippest part of Paris, but it is certainly in one of the most iconic areas, just off  the Champs-Elysee in full view of the Arc de Triomphe.

During a recent visit at the invitation of Hotel Barriere, I had the chance to check out the property’s extensive renovation, which was unveiled in July 2017 and took place while the hotel closed for six months.

Although the 81-room hotel didn’t open until 2006, its Le Fouquet’s brasserie has been feeding luminaries of film and literature for more than a century.

Back in the 1930s, stars like Josephine Baker and Marlene Dietrich dined often at the restaurant, followed in the ’50s and ’60s by French new wave film directors like Jean-Luc Godard and Francois Truffaut. More recently, celebs like George and Amal Clooney, Meryl Streep and director Sofia Coppola have been known to frequent the restaurant.

Although I didn’t see anyone famous during our stay (I looked), what I did discover was a luxury, five-star hotel that pays homage to its legendary eatery without taking itself too seriously.

Although the building housing the hotel is relatively new, the exterior features a Haussman style that fits in with the other more established architecture in the area. Similarly, while the recent interior redo was extensive, the new decor gives a nod to the restaurant’s cinematic connection.

The reimagined lobby gives guests a dose of movie star glamour immediately on arrival. Dark velvets, sparkling lights and a distinct theater ambience mark not only the lobby but also the adjacent bar and cozy lounge. 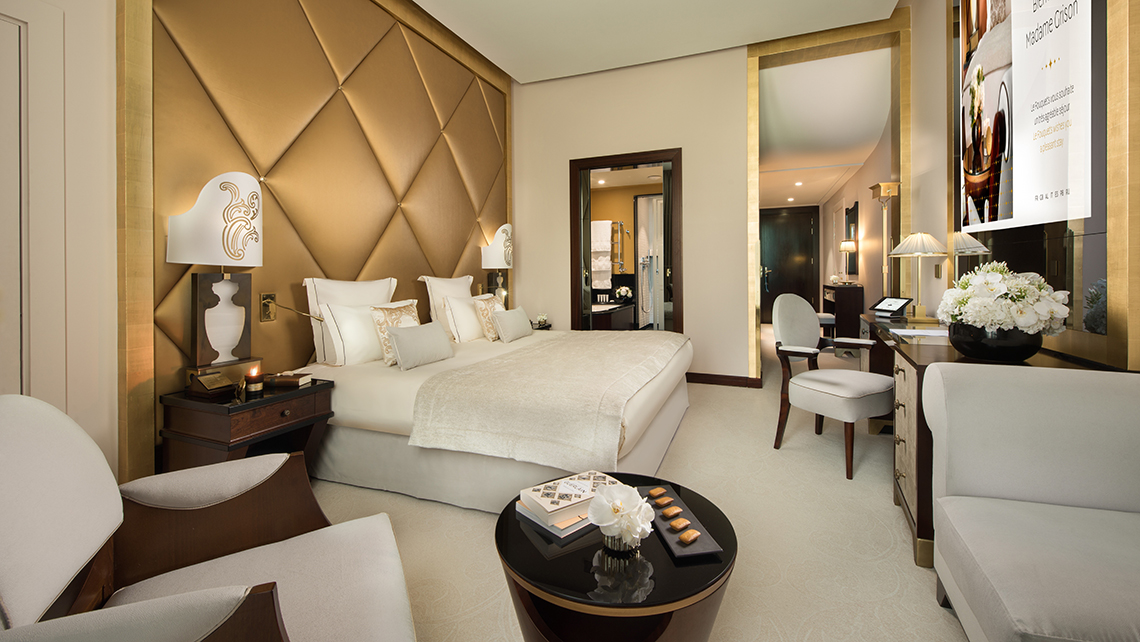 The guestrooms, on the other hand, have been lightened up with a contemporary feel, muted colors and such upgrades as velvet couches and granite bathrooms and even chromotherapy bathtubs that use colored lights to enhance relaxation.

One feature remains untouched, however: the oversize, quilted, gold leather headboards that channel Hollywood in its heyday.

Jacques Garcia, who designed the property’s interior when it first opened, also spearheaded the redesign.

The brasserie, overseen by Michelin-star chef Pierre Gagnair, was also refreshed, along with Le Joy restaurant and bar, which opens onto an inner garden. I especially like the quirky touches in the lobby bar, such as a neon sign emblazoned with the words “Where is my Mind?” and an eerie skull that presides over the otherwise ornate, colorful bar.

Other features include the 2,460-square-foot Spa Diane Barriere, which offers an indoor swimming pool, an Aqua Circuit, eight treatment rooms, Shiseido products and a full-service gym.

Not content to rest on its well-established laurels, the property is poised to open 19 new rooms and signature suites overlooking the Arc de Triomphe and the Champs Elysees by the end of the year.