Italians say the best pecorino cheese is made from the milk of sheep that graze in wild places. I had no doubt that this was the case with the pale, aromatic slice I ate for breakfast, alongside a spoonful of pear conserve scented with saffron from crocuses grown in Gabriella’s garden. There was also ricotta, homemade bread, cured meats and almost rudely ripe, intensely sweet persimmons from the tree we could see through the window.

As we were finishing our second coffee, Mario, who had clearly been up for hours, pulled up a chair and talked to us with such passion about their land and their oil – their lifeblood, he called it, matter-of-factly – that we wanted nothing more than to walk the land and taste its produce. 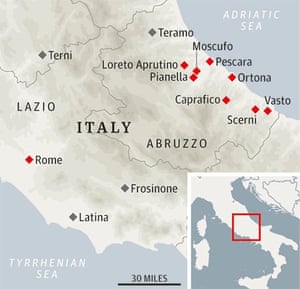 Abruzzo is half way down the boot of Italy, on the other side of the peninsula from Rome. It is a region of dramatic geography – high peaks contrasting with a diverse coastline and rich agricultural land still scratched with ancient tratturi, pathways along which shepherds moved their flocks in search of pasture. For centuries, although isolated by formidable mountains, Abruzzo was considered the store cupboard of Rome. It is still a region that provides abundantly, and although now thoroughly “discovered”, it remains marvellously unspoilt, stoically true to itself and its deeply held traditions, not least when it comes to food.

In some ways, Mario and Gabriella Tortella’s agriturismo, Le Magnolie is a microcosm of Abruzzo itself, set between sea and mountains: the Adriatic is 25km to the east, and the Gran Sasso mountain looms to the west. The handsome 16th-century farmhouse sits on a hill near the town of Loreto Aprutino and is surrounded by land that provides olive oil, wine, wheat, fruit, vegetables, herbs and honey. The abundance is thanks, in part, to its sunny hillside position and mild climate, but also to the 30 years of hard work put in by our hosts. Their agriturismo, with two en suite rooms, plus self-catering apartments and a two-bedroom chalet, is lovely: stylish but not precious, and extremely comfortable.

Days may be short in early November, but with the grape harvest just finished and the olive harvest still in progress, it is a significant time to visit Abruzzo, and especially the hill towns of Pianella, Moscufo and Loreto, often referred to as the golden triangle of olive oil.

Walking out from Le Magnolie into the surrounding countryside dotted with farms and ancient outbuildings, we were quickly lost among ancient twisted trunks, silvery leaves and the precious fruits, the ground beneath our feet as rich and damp as the air. While some farms had finished their harvest and were burning rogue olive branches, folding nets or stacking multicoloured crates, others, slowed by the recent rain, were still hard at work, picking olives by hand or machine. 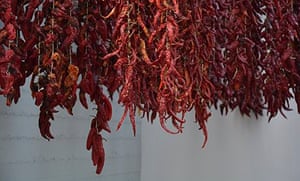 To further our oil education, Mario drove us to the hamlet of Caprafico at the foot of the Majella massif. It was dark when we arrived, but not as dark as the mountains rising behind us like craggy giants. Apparently, on clear days the views are breathtaking. We heard the persistent hum of the frantoio, or olive oil press, long before we saw it. Freshly pressed olive oil smells rather like freshly cut grass: an incongruous but delicious odour on a damp November evening.

Since 1924, four generations of the Masciantonio family have produced extra virgin olive oil at their mill, Trapeto di Caprafico, and it is now considered some of the best in Italy. Trapeto di Caprafico is a happy marriage of tradition and sleek modernity and the oil is sweet, grassy and reminiscent of almonds. This is olive oil that people evangelise over; six litres clinked in time with each curve as we drove back to Le Magnolie for dinner.

That evening, at one of the long dining room tables, we tasted Mario and Gabriella’s own oil, into which Gabriella had chopped dried sweet red peppers. It’s called olio santo, holy oil, she told us, as she placed the dish on the table. We spooned the oil over white beans and slices of pumpkin. Next came handmade fettuccine dressed in a rich duck gravy, followed by the braised duck itself, falling off the bone. We finished with – and were finished off by – a fiendishly good ricotta, chocolate and almond pudding and a glass of inky-black digestivo made from sour cherries macerated in Montepulciano wine and sugar and left in the sun for 40 days. 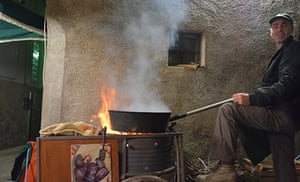 Wishing our four days were 40, we left Le Magnolie and drove towards the sea. Abruzzo’s identity is so inextricably connected with mountains and pastures that it’s easy to forget its 130km of coast – some parts rocky and formidable, some broad, sandy and inviting. We had an excellent fish lunch at Al Vecchio Teatro in part-grotty, part-delightful Ortona, then drove south down the coast road to our second agriturismo, Fattoria dell’Uliveto, in the town of Scerni, stopping along the way to count the trabocchi, ancient fishing platforms that rise from the water like skeletal sea monsters.

Luigi di Lello, our second host, had been quite categorical: the best brodetto Vastese, the celebrated local fish soup, was to be found at Da Ferri (Via Osca 58, +39 0873 310320), a trattoria in the port region of the old town of Vasto. At first glance, the place seemed not just closed but desolate, and had me wondering if Luigi had booked a table at the right trattoria, but a side entrance opened up into a warm and suitably maritime dining room, presided over by a chef in a bright yellow toque.

Brodetto Vastese is a dish inseparable from its history. For centuries, local fishermen, having sold the best of their catch to those who could afford it, would come inland and exchange the less-sought-after fish (often the most tasty) for the farmers’ tomatoes, mild and fierce peppers, and olive oil. Made and served in a wide dish called a tijella, it is robust, gutsy food that requires rolled-up sleeves, a fork, a spoon, your hands and masses of toasted bread to mop up the deeply flavoured broth. The initially empty restaurant filled steadily with locals who approached their steaming bowls with reverence and strategy.

Bartering has, it seems, played a fundamental role in the food of Abruzzo. During the laborious transumanza, the annual migration of thousands of sheep from the mountains through Abruzzo down to the plains of Puglia, shepherds would offer farmers sheep, wool and milk in exchange for shelter, oil, wheat, corn and vegetables.

Luigi and his brother Antonio remember the transumanza passing in front of the family farm which is now the agriturismo. They are as dedicated to retaining the culinary traditions borne of this exchange – and of periods of both scarcity and abundance – as they are to cultivating their land, sharing knowledge and offering hospitality.

Before Sunday lunch, we drove up into the hills to another plot of land where the two brothers and two other associates raise and slaughter pigs to make another very traditional food, ventricina del Vastese, a cured sausage of leg, loin and shoulder pork mixed with sweet and piquant red pepper, fennel seeds, black pepper and salt. Considered the best in Italy by the slow food movement, the brothers’ ventricine were hanging like mottled cocoons in a cool stone room. 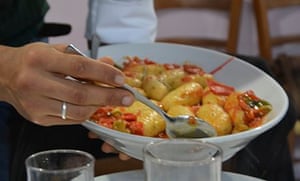 It tasted every bit as good as it sounded – perfectly cured, warmly spiced and served as part of a huge lunch, eaten alongside seven or eight local families at Fattoria dell’Uliveto. Every element of the meal was produced on the farm: cheese for the polpette (croquettes of cheese, egg and breadcrumbs), flour for the maccheroni alla chitarra (fat spaghetti made by rolling out egg dough over thin wires stretched on a wooden frame like a guitar), chard, sweet fennel, pork and, of course, the olive oil and deep, dark young wine.

This was generous and gloriously good home cooking steeped in tradition. After a herb-infused amaro, to help with digesting such bounty, we collapsed into a post-prandial nap.

There is always a sagra, or local festival, going on somewhere in Abruzzo. I’d berated myself for the first two days for not having planned our trip around a festival of chestnuts, snails or some ancient ritual, but then on our last night we stumbled upon a sagra in the village of Casalbordino. We never actually ascertained what we were celebrating – although we suspected it was gratitude for both new wine and new oil, but the entire village and most of the surrounding ones appeared to have come together for a riotous night of eating, drinking and dancing.

There were arrosticini, cubes of lamb impaled on wooden skewers and cooked over charcoal as shepherds have done for hundreds of years. We bought half a dozen between us and ate them while drinking violet vino novello from plastic cups and listening to a local band sing “I feel good” and watching half a dozen frisky men in medieval costume wrestle a passerby into the stocks. 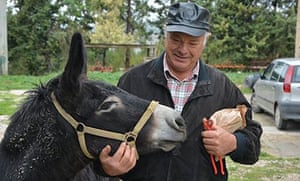 The next morning, we headed for the Majella national park. Here the mountains take on Alpine proportions, silent and empty, rising sharply and then descending gradually into thick forest cut by limpid rivers. Every so often, our breath was snatched by the sight of a village balanced precariously on a ridge or peak.

But beautiful though it looked, it was not the scenery that had imprinted itself on my mind but something more elemental: smell. From the first discernible wild herb at Mario’s gate, we had been on an olfactory journey: olive oil like freshly cut grass, fish soup robust with the scent of the sea, lamb seared over hot carbon, freshly pulled corks and the musty, carnal scent of 100 ventricine quietly curing.

These were all sure signs of food closely connected to its source and its season – food that is a bold and honest expression of an extraordinary place, its history and traditions.

Getting there
Ryanair (ryanair.com) flies from Stansted to Abruzzo’s only airport, Pescara, from £25 one way, but there are loads of flights from all over the UK to Rome, which is a couple of hours’ drive away

How to do it
The trip was provided by Long Travel (01694 722193, long-travel.co.uk) which offers week-long trips to Abruzzo, with stays in two agriturismos, from £467.50, including car hire and half-board accommodation, but not flights

• Rachel Roddy is a food blogger and writer based in Rome (racheleats.wordpress.com). Her first book, Five Quarters: Recipes from a Roman Kitchen, will be published by Saltyard Books in 2015