I arrive on the wind of the carnival. A rather unexpected wind, causing chaos throughout the city, and bringing with it the worst snowstorm of the winter. Over 30 inches of snow has fallen on Québec overnight, and it looks like an etching dating from some more primitive time, when wolves would cross the frozen rivers and prowl between the buildings.

It’s a place that has been calling me for years. Growing up in Yorkshire, the child of a local man and a French woman, I learnt to understand my dual culture by means of songs and folklore. French and English folk songs have more than a little in common and, over centuries, have crossed the sea to the New World, leaving fragments of themselves wherever they have come to land.

One was a ballad called V’là l’bon vent (roughly translated, it means “there goes the wind”) which my mother used to sing to me. I quoted it in some of my books, including Chocolat and my latest, The Strawberry Thief, and once I sang my version of it down the phone to Johnny Depp, as he worked out the chords on his guitar, for later use in the movie. It’s a very old song, dating back at least as far as the 16th century, and although the chorus and music have changed depending on the region, the story, sad and mysterious, has survived for well over 500 years.

The folklorist Ernest Gagnon, in his Chansons Populaires du Canada (Québec, 1865), suggests that the version with which I grew up is of French Canadian origin. Perhaps that’s where Vianne Rocher, the itinerant heroine of Chocolat, picked it up and brought it home. And now I’m here in Québec, at a winter carnival, just as Vianne’s journey began in France. 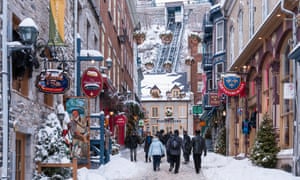 The Carnaval de Québec is a pre-Lenten tradition, dating back to 1894 – a celebration of winter through folklore, music and feasting. One of the world’s largest winter carnivals, it is held every year in mid-February on the city’s Plains of Abraham, with an ice palace, lantern parades, snow sculpting, games, outdoor sports, (ice-canoe races, snowboarding, ice hockey, dog-sledding, snow-shoeing) and a masquerade ball at the Château Frontenac, one of Canada’s grand railway hotels, which dominates the Upper Town in all its mock-Gothic glory. The celebrations are fuelled with warming shots of caribou (a traditional drink of port, whisky and maple syrup), and presided over by Bonhomme, the Carnival mascot since 1955, a giant snowman wearing a red tuque hat and traditional chevron sash.

Thousands of people attend every year, and the atmosphere is vibrant and welcoming. Parents and children skate on the rink at the Place d’Youville, or practise archery or axe-throwing. The really brave can try Au 1884, a historic toboggan slide from the hotel’s Dufferin terrace. There’s something for everyone here, and visitors whose French isn’t quite up to scratch, will find that most people speak English, especially during the carnival. 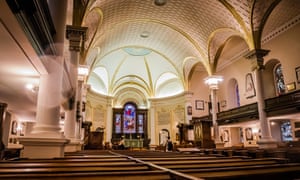 This place feels very familiar, even though it’s my first time here: folk music plays through speakers lining the streets and, with a sense of deja vu, I recognise V’là l’bon vent. In spite of its size, Québec retains a villagey feel under the snow, and a warm and convivial atmosphere.

The name Québec comes from an Algonquin word, kébec, meaning “where the river narrows”. It refers to the part of the Old Town where the St Lawrence river flows into a cliff-lined gap. Vieux-Québec, in and around the walls, is a maze of stone buildings and winding streets lined with cafes and restaurants. Porte Saint-Louis and Porte Saint-Jean are the main gates, and the Upper and Lower Towns are linked by flights of steep stone steps that remind me of Paris’s Montmartre. A funicular from rue du Petit Champlain, with its many little boutiques, runs to the upper town, where at Les Trois Corbeaux on Côte de la Fabrique, visitors can watch glassblowers at work, creating the pieces on sale. The buildings are still decorated for Christmas: it gives the Old Town a timeless feel, a world caught in a snow-globe. 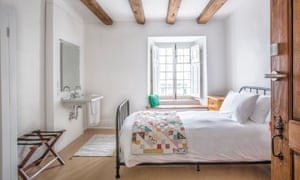 Churches, convents and seminaries abound, reflecting the strong Catholic heritage of the city. My hotel, Le Monastère des Augustines, (doubles from £104 B&B) is a former convent, retaining many of its original features, including the chapel, refectory, a museum and many of the old nuns’ cells have been converted to guest rooms, clean and austere, but comfortable. A small group of Augustine nuns still live here: at breakfast (which is conducted in silence) I hear them singing in the church; this, along with the healing and yoga sessions, all contribute to the air of seclusion and peace.

Elsewhere, Québec’s strong history of Catholicism is still apparent. My guide, David Mendel, author of many books on the city’s architecture and history, takes me on a tour of its churches, including Nôtre-Dame de Québec, with its spectacular gilding; the Cathedral of the Holy Trinity, with its English chamber organ; and the Seminary of Québec, which prepared young men for the priesthood. 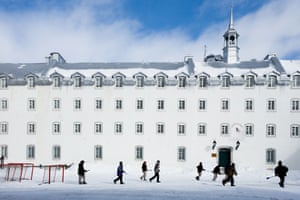 I also meet Robert Bouthillier, a folk music expert from Brittany. He tells me that V’là l’ bon vent is far, far older than I’d thought. At least 300 variants exist, covering all of the French-speaking world and, over a breakfast of pancakes at Chez Muffy, we discuss how different narratives adapt to suit their environment, and how a song from medieval France could have become so well-known in Canada.

But this is a land of stories. Stories are what people bring with them when they leave their native country; stories are what built Québec, stories of conquest and courage and hope. Everyone has a story here – or a song or a recipe. The stories of the city are those of the people who came here, and everywhere those stories are linked to its famous hospitality. Perhaps it is the language – the language of my childhood – that makes me feel so welcome. Or maybe it is the fact that on every street, people are sharing food, music and laughter.

Feasting has always been a part of the tradition of Québec. Excellent eateries abound – including at my hotel, where the chef, Sylvestre Hervieux-Pinette, serves marvellous six-course tasting menus (including bison steak, roasted beets and chocolate tart). 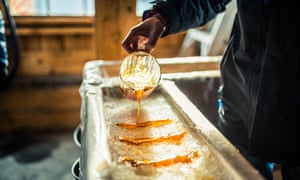 Another experience not to be missed is lunch at one of the regional sugar shacks – cabanes à sucre. Live folk music and traditional food (meat pies, boiled ham, chickpea soup, tarte au sucre and of course, glasses of the famous caribou) are topped off with maple candies, made in front of you in the snow.

If you can tear yourself away from the delights of the carnival, it’s worth heading out to l’île d’Orléans, a river island in the Saint Lawrence, five kilometres or so east of downtown Québec. Home of the great Montmorency Falls, it offers a taste of rural life close to the city. The village of Saint-Jean has a lovely chocolate shop, Chocolaterie d’l’île d’Orléans, a family business owned by Geneviève Noël, who makes all her chocolates on site in a tiny artisan workshop. 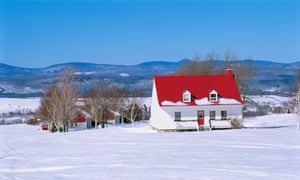 The island is still largely agricultural – although none of that matters under the snow – but I take the opportunity to try dog-sledding with l’Equipe Mi-Loup (adult £42). It’s supposed to be an hour-long ride but, with more snow than expected, it becomes a real adventure. There’s another storm on the way, and the dogs need our help to guide the sledge through the deep snow.

As we drive through the pine woods (singing V’là l’bon vent), I spot coyotes watching from between the trees and, although our guide later reassures me it was only a pack of dogs, I stand firmly by my coyotes, and will not be persuaded otherwise. We get back two-and-a half hours later, long after dark. Happy and exhausted, we’re glad of cups of hot chocolate and an open fire. 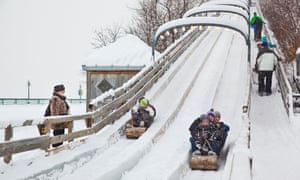 Next day, I head west of the city into rural Québec and the village of Saint-Côme, known for music, folklore, food and traditions. I meet with the mayor, Martin Bordeleau, who happens to be in a band himself, and the baker, Marie-Pierre LaJeunesse, whose great-grandfather founded the village bakery in 1943, and whose cinnamon rolls alone are worth the three-hour drive from the city.

They also introduce me to the ice-sculpting festival of Saint-Côme, to which every household in the village contributes. Huge blocks of ice are harvested from the river, and cut by chainsaw into magical shapes that line the main street. Each has a different personality, and there’s a fierce but good-natured rivalry between the artists. The sense of being in a snow-globe is ever more pronounced here, where everyone knows everyone else, and everyone has a story. 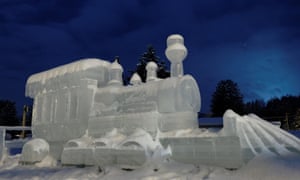 We lunch at the Trécarré microbrewery, during which a trio of folk musicians set up at the bar and start to play. The patrons join in the singing – the singer and violinist, Michel, tells me that this happens throughout the year, but especially during winter, when spirits are flagging. In this dazzling sunlight, I find that hard to believe, but the winter is long, he tells me. Stories and music provide a means of fighting against the dark. And here, with the snow piled six metres high in some places, a strong sense of community is a matter of survival.

That evening, there is a concert by local musicians. The first band I see has the mayor on lead vocals, his family alongside him. If only the mayor in Chocolat had had the same priorities.

But things are different in rural Québec. Perhaps it is the snow-globe effect. Or maybe it is the fact that here, most of all, music and stories are like seeds, settling over the countryside, borne on the wind that has blown them here from villages all over Europe. This is the wind of my folk song. And the same wind has brought me here, so I am part of the story now – albeit a very tiny part – writing my own variations and carrying them back home with me. 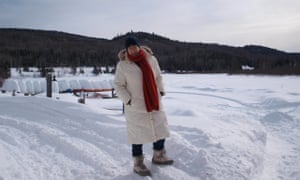 “It’s easy to become part of this place,” said Bouthillier, the folklorist. “I came here intending to stay for six months, and ended up staying 20 years.”

I can well believe it. Cocooned in the snows of yesteryear, Québec is like an enchanted realm, dreaming fiercely under a sky as blue as in a fairytale. The snow has stopped falling as I leave to head back to the airport. But the stories and songs are still playing here – and that wind is always blowing.

Joanne Harris’s novel The Strawberry Thief (£19.99, Orion Books), the fourth in the Chocolat series, will be published on 4 April. To order a copy for £17.60 including UK p&p visit The Guardian Bookshop

Walks near me: Experience the beauty of the North with a walk near Sheffield
We and our partners use cookies on this site to improve our service, perform analytics, personalize advertising, measure advertising performance, and remember website preferences.Ok