When it comes to holiday jaunts, the site of a nuclear disaster zone, the home of a serial killer or the execution chamber of a former state prison don’t scream “wish you were here”. But while it might not be everyone’s idea of fun, demand for macabre attractions and disturbing experiences that recreate horrific moments in history is growing – dark tourism is on the rise.

Last month the Sacramento Old City Association opened the home of notorious 1980s Californian serial killer Dorothea Puente for a tour that included pointing out the spot in the garden where her victim’s bodies were buried. This spring, the notorious Missouri State Penitentiary, nicknamed “the bloodiest 47 acres in America”, opened to visitors with a chance to see the gas chamber once used for executions. And there are currently plans underway to turn the disaster site of the Fukushima Daiichi nuclear power plant into a tourist destination. In the case of the latter, radiation levels mean it will be at least 25 years before the site could possibly open to the public.

Places such as Auschwitz-Birkenau, the Cambodian killing fields and Ground Zero are some of the best known destinations that fall under the dark tourism category. But Dr Philip Stone, executive director of the Institute for Dark Tourism Research at the University of Central Lancashire, which was founded last year, says dark tourism is any travel associated with death, disaster or the macabre. “It’s the commercialisation of death,” he explains. “Take the Flight 93 crash site. Soon after it happened farmers were selling tours of the field. But now there’s an established memorial. There’s been a process of commercialisation from that initial demand to becoming a formal destination.” 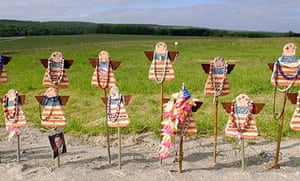 As well as the well-known sites of memorial and human tragedy, there are increasing opportunities for travellers to immerse themselves in unpleasant experiences of the past. In Vietnam, visitors to the Cu Chi tunnels, used during the Vietnam war, are invited to crawl around inside, while above ground a firing range offers the chance to use an AK47 – the weapon of the choice for the Viet Cong army. This week photographer Ina Fassbender reported on her experience of spending the night in a former Stasi bunker in East Germany. The bunker museum at Rennsteighoehe offers a “reality experience”, where visitors can spend a gruelling 16 hours dressed as and being treated like a former DDR soldier. Some of the “officers” leading the tour actually were soldiers during the Cold War. Similarly, in Latvia, the Karosta Prision, now a hotel, invites guests to be a prisoner for the day. Before being shown to your cell, guests must sign an agreement allowing them to be insulted and treated like a prisoner. If you disobey orders guards can be force you to do physical exercise or cleaning jobs.

Recently, the behaviour of some people at dark tourism destinations came under scrutiny when Jason Feifer, a journalist from New York, began re-posting tourists’ inappropriate self portraits, or “selfies”. The Selfies at Serious Places tumblr account features one teenager doing a thumbs up at the holocaust memorial in Berlin.

“I think most people are going to these places with a purity of curiosity,” says Feifer, who hoped the blog would start a discussion around the issue. “I work opposite Ground Zero and I watch tourists taking photos. People take selfies there. It’s funny. People just want to capture a moment down there and they don’t know how to do it.”

One tourist who featured on Heifer’s blog is Jake Fletcher, a 20-year-old student from Hull. He is pictured open-mouthed in front of the Chernobyl nuclear power station. He doesn’t regret taking the photo, but the experience has fuelled his interest in dark tourist destinations. “Normal beach holidays can’t compare to the experience I had at Chernobyl,” he says. “It’s one of a handful of places on Earth that you could actually call a dystopia. While you’re there you do get a strange feeling. I felt a sense of gladness that myself and my family haven’t had to experience horrors like those in Chernobyl.”

For Mark Watson, executive director of ethical travel campaign group, Tourism Concern, there’s not a clear cut answer to whether dark tourism is right or wrong. “People go for a huge variety of reasons, so it’s very difficult to assess their motivations,” he says. “At places like Auswchitz and the Rwandan Genocide Memorial, people go to really understand what happened and are genuinely moved by it. You’ve got to look at the impact on the communities and understand the local sensitivities. It shouldn’t be a case of blundering in and taking some photos.”

But despite the uncomfortable nature of dark tourism, it seems to be something most of us will have engaged with at one point in our lives. “Dark tourism doesn’t need dark tourists,” says Stone. “It just needs people who are interested in learning about this life and this world.” 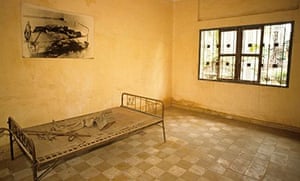 Tuol Sleng Genocide Museum, Cambodia: At a former high school that was used by the Khmer Rouge as the notorious S-21 prison during the 70s, visitors can walk through cells still containing the rusted chairs and beds where as many as 20,000 prisoners were tortured and killed.

Hiroshima Peace Memorial Park, Japan: Dedicated to the memories of the 140,000 direct and indirect victims of the nuclear attack on Japan, the memorial park includes the skeletal ruins of the building now known as the A-Bomb Dome – the closest building to the centre of the explosion to remain standing.

Auschwitz Birkenau, Poland: The concentration and extermination camp where approximately one million European Jews were murdered by the Nazis. Each year over a million people visit the site, to reflect upon and learn about the events of the holocaust.

Hoi An, Vietnam: Tourists visiting the city of Hoi An can book tours to the nearby site of the My Lai Massacre, where hundreds of women and children were brutally murdered by US soldiers during the Vietnam war.

Robben Island Prison Museum, South Africa: For over three centuries, Robben Island, just off the coast of Cape Town, was used to hold political prisoners. It was here where Nelson Mandela was imprisoned for 18 of the 27 years he served behind bars and the site is now considered a symbol of triumph over repression and racism.