There’s a new, easy-breezy way to get around the Walt Disney World Resort. Starting Sunday, Sept. 29, guests can ride the Disney Skyliner from four Disney resort hotels to Epcot and Disney’s Hollywood Studios.

Dubbed “the most magical flight on Earth,” the Disney Skyliner whisks guests away in colorful gondolas above the treetops, giving a bird’s-eye view of the parks and hotels below. The new transportation system connects Epcot and Disney’s Hollywood Studios with Disney’s Art of Animation Resort, Disney’s Pop Century Resort, Disney’s Caribbean Beach Resort and the new Disney’s Riviera Resort, a Disney Vacation Club property opening on Dec. 16.

“You get a whole new appreciation of Walt Disney World when you see it from up there,” said Thomas Mazloum, senior vice president at the Walt Disney World Resort, at a dedication ceremony for the Disney Skyliner this morning. He noted that cast members have coined the term “Disney Skyliner hair” for the ruffled hairdos guests experience while riding in the breezy gondolas.

Disney Skyliner’s nearly 300 cabins were “specifically designed for the type of weather in Central Florida,” said Trevor Ocock, director of transportation operations at Walt Disney World Resort. Covered with a protective film to keep out direct sunlight, the cabins feature vented windows and floors that maximize airflow, resulting in a cool, breezy ride with comfortable seating.

Each of the vibrantly colored cabins—many with exterior character theming—seats up to 10. Recorded announcements describe the sights below—noting, for example, when guests are gliding over the headwaters to the Everglades or along Buena Vista Drive, “named after Buena Vista Street in Burbank, California, where the Walt Disney Company’s headquarters are still located today.” Epcot’s Spaceship Earth and the Hollywood Tower Hotel, home to Tower of Terror, are among the iconic locations visible from the gondolas.

Guests board Disney Skyliner at five boarding stations, each with a design that reflects its surroundings. In addition to the stations at Epcot, Disney’s Hollywood Studios, Caribbean Beach Resort and Riviera Resort, a shared station on Hourglass Lake serves the Pop Century Resort and Art of Animation Resort. 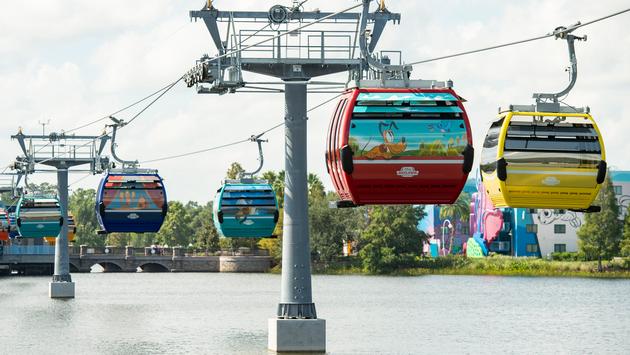 All Walt Disney World guests are welcome to ride Disney Skyliner, not just those staying in the connected resorts.

“And we hope that they do, because it is such a great experience,” said Ocock. He noted the beautiful rooftops and pools visible above the Caribbean Beach Resort, for example. “It’s such a different vantage point, and each line has a unique perspective and view.”

The Disney Skyliner’s debut “is really part of our continuous investment in truly transforming Walt Disney World and getting us ready for our 50th anniversary in 2021,” said Mazloum, pointing to such recent expansions as the July opening of Gran Destino Tower at Disney’s Coronado Springs Resort, the new NBA Experience at Disney Springs, and the recently opened Star Wars: Galaxy’s Edge at Disney’s Hollywood Studios. “This is a wonderful new addition to Walt Disney World Resort as we constantly change and evolve to improve our guest experience all the time.”