At first we walk along the forest edge. On the right is a stone wall and beyond it women are weeding their potato patches. Watching them are two magnificent augur buzzards, eager to snaffle any rodents. Sunbirds loop in crazy arcs around our heads and a chameleon creeps away along a branch. “The wall was built to keep the wildlife out of the farms,” says wildlife ranger Christine, “but it doesn’t always work.” We turn towards the jagged mountain on the horizon and enter thick jungle on a narrow trail. 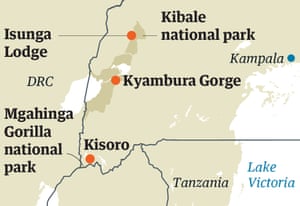 The wildlife here in Mgahinga national park is special. For most visitors to this pocket of volcanic mountains near where Rwanda, Congo and Uganda meet, the mountain gorillas are the headline ticket. But I want to see what else western Uganda has to offer. At park HQ, groups of well-heeled, rather elderly, tourists are being shepherded towards the gorilla walk. I am the only candidate for the Golden Monkey Habituation Trek. Am I crazy, I wonder. After all, seeing gorillas is the ultimate bucket list item. Why not join the throng?

For a start, gorillas are expensive: in Uganda you pay $600 for the chance to encounter them; in Rwanda fees recently went up to $1,500. For that you can hope for an hour with the animals. Smaller beasts attract far smaller fees: $100 in the case of golden monkeys.

“Gorillas are quite easy to habituate to humans,” Christine tells me. “And they like sitting around. Golden monkeys are much rarer and harder to find. This group keeps moving. We could be out trekking for the whole day.”

And there’s the key for me: I want to be out all day. I want to see the jungle and as many of its inhabitants as possible, not just grab one iconic species and be back for lunch. Besides, I may end up with the best of both. Richard, the other ranger, says: “We sometimes run into a gorilla anyway. There is one old male who was habituated, but went wild again. He often turns up in the Golden Monkey territory.” 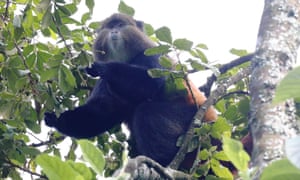 We begin to climb, slipping through bamboo groves and into thick under-storey. Richard leads, slashing through the vegetation with a machete. He’s in radio contact with another ranger and we have a possible golden monkey sighting to check out. We reach an impassable cliff, double back and press on.

Two hours go by, and then there’s a sudden movement in the canopy and an alarm cry. Richard takes off, clambering rapidly up a steep forested slope, then along a ridge. We slow down. Richard tells me not to break twigs underfoot: it can startle the monkeys. We do, however, talk in low voices. Habituation means helping the monkeys relax when humans are near.

And finally, after three hours, we are rewarded. The dominant male of the group is quietly enjoying his morning coffee – actually chewing his way around a wild coffee tree. Coffee beans rain down. My binoculars reveal a beautifully groomed monkey with impressive whiskers. For 30 minutes we sit and watch until, with a splash of branches, he’s gone. By the time I return to the park office, we’ve been out for over seven hours. I haven’t seen that old gorilla, but I’ve seen a lot of other things. The gorilla walkers are long gone.

At the gate I linger for another hour of birdwatching: the park is small (13 square miles) but has 116 bird species, many endemic to these mountains, including the spectacular Ruwenzori sunbird who makes a brief appearance for me. That night I stay at the Traveller’s Rest in Kisoro, a 30-minute drive north, which is a simple but lovely guesthouse with great views of the Virunga mountains.

In the 1960s and 70s it was second home to conservationist Dian Fossey, who was strongly opposed to wildlife tourism. These days, however, tourist dollars have helped defeat the poaching that plagued the area in Fossey’s lifetime, though they have not stopped human encroachment on gorilla territory. 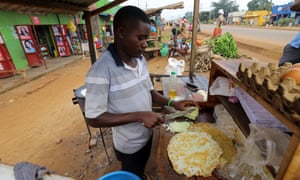 Next morning I move on with guide and driver, Ibra, who introduces me to Ugandan street food, notably the “rolex”: a rolled chapati containing omelette, tomatoes, red onion and fried cabbage. It’s delicious and becomes our mainstay snack, along with another Ugandan favourite, passion fruit juice.

This is not an upmarket safari: I’m with Travel Local who do things more affordably than many safari operators, so I’m staying in budget hotels, often tents covered with thatch, but unless you need swimming pools and room service, the standards are good: clean simple accommodation with a decent dinner. My only complaint is that the food tends to be non-Ugandan cuisine, but tourists in Africa are rarely served what the locals eat. For me, Ibra and the rolexes are a welcome gateway to local food, one followed by an introduction to matoke, the Ugandan staple of boiled, mashed plantains with sauce.

Another budget aspect is the vehicle. I’m in a van, not a customised 4×4, and Ibra is a driver, not a wildlife guide. But he knows his birds and animals well and it’s Ibra, not the guides in the fancy 4x4s with raised game-viewing seats, who locates the tree-climbing lions in Queen Elizabeth national park (which we pass through later en route to Kibara national park).

Our next stop is Kyambura Gorge, five hours north, to visit a habituated group of chimpanzees, an experience that costs $50 (plus $40 park entry). My guides are Valencia and Esau; the latter has been working with these chimpanzees for over three decades. We take a narrow trail down into the gorge and soon hear a cacophony of wild whooping. Valencia grins, “You’re a lucky man!” 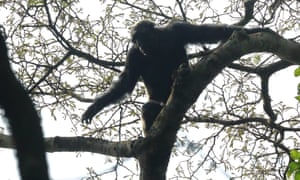 We cross the river at the foot of the gorge and head back along the bank. Valencia points out chimpanzee nests, six metres up in some smaller trees. “They make a new nest each night, males sleeping below the females to protect them from leopards.”

As we approach some dense foliage, a chimpanzee rushes out, brandishing a hefty stick which he smashes against a tree. Then, grabbing a convenient liana vine, he swiftly hauls himself aloft, disappearing into the canopy.

“That’s Ekibira,” says Valencia, totally unconcerned by this display. “He once ripped a pocket off Esau’s trousers.” He peers into the bushes. “And there’s Lumumba, the former president.”

Behind the sleeping ex-president I spot a movement: a female with a baby, who peers back at me. “They tend to be secretive with the babies,” says Valencia.

“How come Lumumba is still alive?” I ask. “Didn’t the new alpha male kill him?”

Valencia looks surprised. “No, it usually doesn’t happen like that. In this case a group of males formed an alliance with Kihango, a 32-year-old male. Lumumba simply retired. It has changed him though: he used to be very confident but he’s become a bit shy.”

This is the first of many surprises. TV documentaries love to show the violence and savagery of chimpanzee life, but Lumumba the chimp survived being toppled (unlike Patrice Lumumba, the human and first president of post-independence Congo).

“Here’s Moya,” says Valencia, as a young male comes strolling past and casually throws himself on the ground, cocks a foot on a convenient branch, and inspects us while nonchalantly scratching his balls.

I ask Esau about his long experience with this group. What has he seen that most surprised him?

“In the early days, when they were very wild, I would sleep near them. One morning they came down from their nests and I saw them shake hands and hug.” 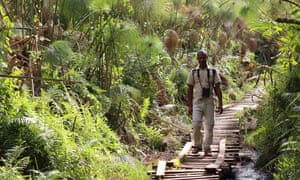 I hear about more shockingly human-like behaviour on my next chimpanzee experience, this time in Kibale national park, a few hours north of Kyambura. Kibale was made a national park in 1993 and before that, poaching was rampant. But an estimated 1,450 chimpanzees – plus a dozen other species of primate – survive in 307 square miles of dense jungle. With three other tourists, I join a habituation trek ($200), this time with ranger Richard Alicwamu, who proves a mine of information, which he delivers in short bursts as we bash our way through thick vegetation. “Yes, I’ve seen them shake hands,” he confirms, “and kiss!”

He then delivers a startling account of chimp sex. The French couple on the trek raise their eyebrows. The American lady reapplies her lipstick. Richard has seen other amazing behaviour. “Once a mother chimp had a coughing baby. I saw her collect some leaves and feed them to the baby. Those leaves are ones local people use too – for sore throats and coughs.”

We then spend a remarkable hour watching the chimps gather wild figs, occasionally swiftly following the animals as they move on. Many people find forest-wildlife watching a frustrating experience, more a series of fragmentary glimpses. But I enjoy the effort required, and on this occasion we get plenty of extended viewings. Back at my lodge, Kibale Forest Camp, I see four kinds of monkey pass through the gardens, then watch colourful barbets and hornbills in a nearby tree. Next day the wildlife extravaganza continues with a swamp walk around Bigodi with a bird expert.

My last overnight stop is on an escarpment above Kisore park. Isunga Lodge is run by an inspirational Glaswegian couple, Karen and Gerry, and a wonderful spot to finish: mousebirds and sunbirds zip around my simple but spacious chalet while great blue turacos, like magnificent feathered dinosaurs, hoot from the eucalyptus grove. I feel I have barely scratched the surface of Uganda’s possibilities – and I haven’t thought about gorillas at all.

• The trip was provided by TravelLocal, which connects travellers with local tour firms. Its seven-day Chimps and Primates in Western Uganda trip costs from £1,450pp based on a group of four, including meals, excursions, park entry fees quoted above, transfers and guide but not flights. Gorilla tracking can be added