Poor Puglia. For centuries rampaging armies used this heel of Italy as a convenient motorway en route to richer pickings further afield. Nowadays, tourists treat a large part of the region in much the same way – barely touching the ground at Brindisi or Bari before speeding south to newly trendy Salento, Puglia’s far southern tip (which we’ve covered in a separate guide).

The geography is fairly simple. The uplands are in the Gargano promontory in the north-east and the Alta Murgia national park in the west, while the rest of the region is flatter, often pockmarked with small hills topped with a settlement of some sort. There are several hundred miles of Adriatic coastline to the east, a chunk of Ionian Sea to the south, and a brace of large, wildlife-rich lakes in the north (Varano and Lesina), which are separated from the sea by low hills and sand dunes.

Since Puglia is basically the shape of an upturned hockey stick, finding a way to see all this is an uncomplicated affair. Hug the coast from Vieste in the north-east to Brindisi in the south, before turning inland to take in the città bianche. Then strike west to Alta Murgia, north to the mysterious hilltop Castel del Monte to experience one of its wonderful sunsets, west to Foggia and then back into the Gargano to complete the loop.

Alternatively, take the train – the main line passes through Foggia before heading for the coast – to visit Trani, Bari, Polignano a Mare and Brindisi. The branch lines that crisscross the region are great for inexpensive day trips to places such as Altamura, Gioia del Colle or the città bianche.

However you explore the place, just remember to take an empty stomach. 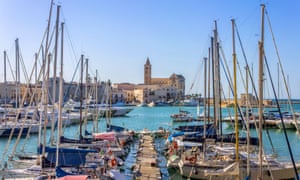 It’s unfortunate that most visitors’ first taste of Puglia is the sprawling mess of autostrade and industrial units around Bari airport. Bari itself has its moments – the narrow, cobbled streets of the old town by the Basilica di San Nicola and the 12th-century Castello Svevo (Swabian castle) are worth a wander and you can sample some ciambotta, the local fish-based stew – but the port city is rather down at heel. At least Brindisi, the region’s other gateway, has spruced itself up in recent years. Broad thoroughfares of blanched stone flanked by tall palms brim with little shops and tempting places to eat.

Look up on the wall of any restaurant in the region and there’s a good chance you’ll see a picture of Puglia’s favourite son, Padre Pio, who died in 1968 but was canonised 34 years later. Decked out in the brown habit of the Capuchin friars, the kindly San Pio gazes benignly down upon the faithful. Up on the Gargano peninsula, the astonishing, new shell-like church built by Renzo Piano at San Giovanni Rotondo, where Pio worked, is already a magnet for pilgrims. 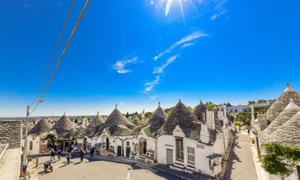 Almost as numerous as San Pio sightings are Puglia’s trulli. Most abundant in the Valle d’Itria, just north-west of Salento, these small beehive-like stone dwellings give the landscape the appearance of having been scattered with upturned ice-cream cones. While most can be seen in the midst of plots of mature olive trees made square through decades of judicious pruning – the town of Alberobello boasts 1,400 trulli in a maze of narrow streets. The ancient settlement is so well preserved it’s been given Unesco World Heritage status. Just don’t mention hobbits – they’ve heard it before.

Alberobello is just one of Valle d’Itria’s string of città bianche or white towns, each on their own little hilltop rising up from the plain and each staring out defiantly at the rest, as if the days of petty fiefdoms were still with us. The white historic quarters of Cisternino, Martina Franca, Ceglie Messapica, Ostuni and Locorotondo are all worth a gander and are within easy striking distance of one another, making a day’s medieval hilltop città tour pretty much obbligatorio if you’re in the neighbourhood.

All these towns, though, are dwarfed by the northern stronghold of Foggia, where ancient churches and palaces are so numerous it makes you wonder what the city’s inhabitants did beyond worshipping and living it up.

By the sea there’s a good mixture of wild coastline and more happening spots. Among the latter is Trani, a slow food city (do try a moscato di trani, the local dessert wine) whose pièce de résistance is a magnificent Swabian fortress and a Romanesque cathedral. 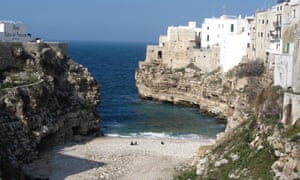 10 of the best country hotels in Italy with great food

However, ask locals what their favourite seaside resort is and you’ll hear one name over and over again: Polignano a Mare. About 20 miles south-east of Bari, Polignano has a compact medieval quarter that might have been designed expressly for lovers of indolent pre-prandial ambles. The little town pushes itself right to the edge of limestone cliffs undercut by caves hewn by the ceaseless nibbling and gnawing of the Adriatic, while its tiny and postcard-pretty beach could be a Cornish cove, if it weren’t for the terrace of tall venerable buildings.

North up the coast is the Sentiero Airone nature reserve, home to those pink flamingos. The reserve is squeezed between the forest and peaks of the Gargano national park, which spreads over the eponymous northern peninsula, and the Alta Murgia national park, a high limestone plateau where, in one particular cave, are no fewer than 30,000 dinosaur footprints.

That’s not even the region’s most dramatic subterranean feature. Castellana Grotte (about 12 miles south-west from Polignano a Mare) is a two-mile-long labyrinth of passages and caverns – making a particularly welcome diversion on a hot summer day. 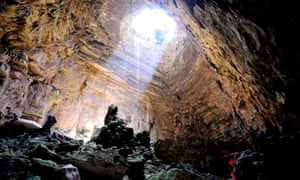 Back above ground, while there’s no classic cycling route through the region, seven miles have so far been opened of the Ciclovia dell’Acquedotto, a cycle path through the Valle d’Itria which will eventually form part of a 155-mile route through Puglia. Walkers, meanwhile, should head for the Alta Murgia national park where wardens lead day-long hikes taking in castles and prehistoric tombs, falcons and sinkholes. 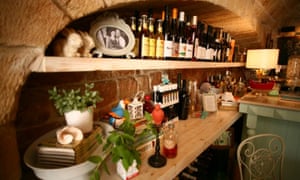 The region’s star attraction is the food. Relatively impoverished though Puglia may be, the Pugliese take their alimento very seriously indeed. As might be expected, seafood dishes predominate, with squid a favourite ingredient, but there’s also a host of local specialities. The inland town of Altamura produces bread prized all over Italy. It’s baked in wooden ovens to a recipe unchanged since the Middle Ages, with the u puène muedde loaf cheekily mimicking a priest’s hat. Gioia del Colle is the place to go for mozzarella and burrata cheese; while in Murgia, cardoncello mushrooms and lampascioni (wild onions) abound. And wherever you are, you can order fave e cicoria, a traditional peasant dish consisting of a warm broad-bean pâté mixed with the local olive oil and served with bitter chicory. Washed down with a carafe of an Apulian primitivo, of course.

Seafood dishes predominate, with squid a favourite ingredient, but there’s also a host of local specialities

Trabucco di Montepucci, Montestrione, near Peschici
This family restaurant is on the oldest of Gargano’s trabucchi (offshore fishing platforms). Here, you can dine next to the sea from which your meal was hauled just hours before by an ancient system of nets, pulleys and winches.
• On the SS89 between Rodi and Peschici, +39 345 893 3151, trabuccodimontepucci.com 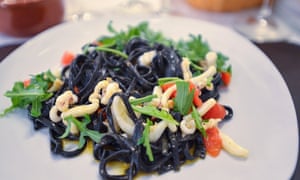 Osteria Pugliese, Ceglie Messapica
Ceglie Messapica may be the least wealthy of the città bianche, but is the acknowledged gastronomic top dog, and this mother-and-sons establishment is cherished by locals. If ordering the fave e cicoria (beans and chicory), ask for some peperoni (large mild chillies) though, whatever you eat, prepare yourself for the heartbreakingly tiny bill.
• Vico I Nannavecchia 10, +39 0831 377115, no website

Cicinedda Fruit Bistrot, Ostuni
Much more than a juice and smoothie bar, this shabby-chic cafe on Ostuni’s Piazza Libertà is a great place to sit and do a bit of people-watching, while sampling a ricotta and vegetable platter or sipping a cocktail.
• Piazza Libertà 15, +39 345 608 2382, no website

Cremeria History di Vignola, Cisternino
Stuffed with cheesecake made from recipes which the family brought with them from Germany, and loaded down with exquisite sweetmeats like the almond-based mandorle atterrate, this tiny cafe is heaven for anyone who has a sweet tooth. Outside tables have wonderful views across the plain.
• Via San Quirico 28, +39 080 444 1055, no website 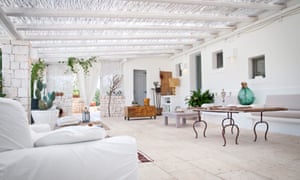 Lama di Luna, Andria
An 18th-century fortified farmhouse adrift in 200 acres of olive groves and orchards, Lama di Luna exudes a monasterial calm, although the swimming pool and gorgeous fireplaces in the bedrooms might stretch the vow of poverty somewhat.
• Doubles from €160 B&B, +39 883 569505, lamadiluna.com

Palazzo Paciotti, Trani
Just a stone’s throw from the cathedral in a lovely coastal town, this recently renovated palace in the old Jewish quarter of town may have kept its ancient façade but now boasts a sleek modern interior with a snazzy take on the four-poster bed.
• Doubles from €80 B&B, +39 340 238 8121, palazzopaciotti.it

Trulli Colarossa, nr Alberobello
In their own peaceful grounds, less than a mile from the centre of Alberobello, these three apartments are fashioned from no fewer than 14 18th-century trulli. When the sun’s out, breakfast comes al fresco and is packed with homegrown ingredients.
• From €35 per person per night B&B (prices for longer stays/more people can vary), +39 339 540 4581, trullicolarossa.it 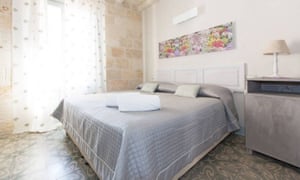 Snuggled away in the old town, behind this little hotel’s cool exterior lie stylish rooms full of antiques. Driftwood tables adorn the roof terrace, where breakfast is served along with great sea views.
• Doubles from €60 B&B, +39 380 385 8898, bebanticomondo.com

• Rail tickets were supplied by Voyages-sncf, voyages-sncf.com, 0844 848 5848. Return fares from London to Brindisi start at £330 standard-class return per person, using the overnight service from Paris to Milan and a direct service from Milan to Brindisi

Influx of Tourists Forces Cancun to Reopen Another Airport Terminal

TravelPulse Podcast: How the Travel Industry Can Be More Inclusive
active travel

Qantas reveals extra reward flights: Here’s how you can get them

A Virgin Australia flight from Brisbane to Cairns just made history

Taiwan airport offers flights to nowhere for people desperate to travel
We and our partners use cookies on this site to improve our service, perform analytics, personalize advertising, measure advertising performance, and remember website preferences.Ok