After dinner, Juanito and I sit drinking beer. Outside is all the clamour of the jungle night. We talk about the big hotels on the Yucatán coast, an hour away by bus. Had he ever been inside one of them? Juanito is 64 and has twice been president of the village tourism co-operative, but he shakes his head. “I’ve heard about them from local people who go and work there, but I’ve never visited.”

The Yucatán peninsula’s east coast is one of the world’s biggest beach destinations, attracting more than five million visitors in 2015. It stretches south from Cancún (“nest of snakes” in Mayan) for about 80 miles to Tulum, and much of the coastal highway is lined with massive hotels, each attempting to outdo the rest in grandiosity: from minimalist chic to monumental mock Maya, a plaster pastiche that might impress 10-year-old Indiana Jones fans. 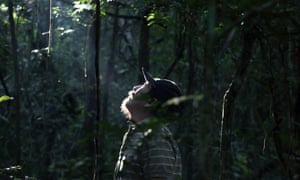 The irony is that on these colossal sites, where every opportunity to mine the local heritage is taken, the nearest visitors get to real Mayan culture is in the unseen room cleaner. And that person has probably travelled from a village in the jungle like the one where I’m staying.

Juanito’s house, called Takkbil’ja, near the town of X-Can, does not much resemble those palaces. There are two buildings, one with a tin roof and the other thatched. There’s a flock of noisy chickens (climbing a tree for the night). And there is Juanito, a widower, and his grandchildren, who he is bringing up. They all sleep in hammocks under the thatch. And now there is a room for visitors – of which I am the first. The guestroom has bright blue walls, a cupboard and a big bed. This is the humble start of an ambitious effort to bring the benefits of tourism to the real Maya, to living people who have seen scant reward from an industry largely owned by outsiders. 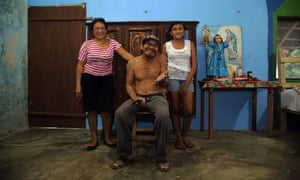 I look at that bed with its new sheets. “Juanito, have you ever actually slept in a bed, rather than a hammock?”

He laughs. “Yes! I once stayed in a five-star hotel in Acapulco. The government sent me there to train in tourism. It was amazing. Anyone could order food to be brought up to their room – even indigenous people.”

He chuckles ruefully. “I tried it for two nights and it destroyed my spine. I had to put my hammock up.”

I enjoy a mental image of the room service person’s face. “You know, that is a beautiful bed,” I say, pointing across the room. “But I think I’d prefer a hammock.”

His face lights up. I think I’ve just risen a few notches in Juanito’s estimation.

Next morning at dawn, we head off for a birdwatching walk through a part of the village’s 22,000 hectares of jungle. Juanito’s enthusiasm levels would match any 10-year-old. We spot spider monkeys and lots of birds. We don’t see any aluxes, a kind of guardian spirit of the forest that Juanito has warned me about. “Once I was hunting too much and they came in the night and told me to stop. I never hunted since then.”

He points out several useful plants: the chewing gum tree, the orchid whose roots help kidney disease, and the tree whose branches run with water when cut. When we return, we find Enrique, local organiser of the “hammocks and breakfast” programme waiting, with breakfast.

“The big hotels do provide jobs,” Enrique tells me, “but they are the menial ones. The workers are bussed in from villages and families often suffer: children and old people are neglected, and there is a lot of alcoholism. What we want is an alternative that lets people stay in their village and gives the visitor genuine contact with Maya people.” 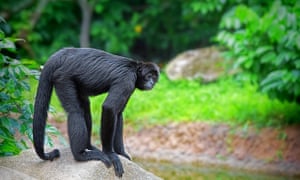 This is not only an opportunity for ethical tourism, though: the village has something special up its sleeve. After breakfast, we meet Edwin, current president of the tourism co-op, and head out into the jungle.

Some of the big attractions of the Yucatán lie below its surface. The limestone is riddled with cracks and caverns, but its big feature is giant collapsed sinkholes, called cenotes. This subterranean world was deeply significant to ancient Mayans: it connected them to the rain god Chaac and provided drinking water in a landscape without rivers or streams. Cenote swimming is big in Yucatán. Many sites have been sanitised and turned into Disneyland-type pools, but that is not what I am going to experience. We wander along a jungle path and drop down into a deep chasm where spider monkeys send shivers through the canopy.

“Our ancestors used this place for water,” Edwin tells me while one of the group performs a short ceremony to grant us access to the subterranean realm. Then we pull on headtorches and pass through a dark entrance between the roots of a giant tree. Steps lead down to a cavern where tiny blind catfish haunt pools of clear water. From there, we follow a rope into a chest-deep river and swim, our lights flickering across banks of stalactites, all glittering with crystals. After a few hundred metres we reach a dry cave where we sit in darkness, meditating for a few minutes. “When we first explored this place,” says Juanito, “there were 18 of us with one torch – and most couldn’t swim!” 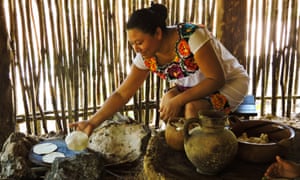 My introduction to Yucatán tourism, grassroots-style, has begun. On my next stop, I get a swift lesson in what tourism can mean here. On the coast near Tulum, I meet Tamara Adame, a diver who wants to show me a particular cenote. It’s on a busy track between major hotels and is threatened by the proposed construction of a 3,000-room resort complex.

This cenote is not spectacular, but it is a nursery for small reef fish who later slip through narrow tunnels into the open sea and grow to be the big specimens that thrill snorkellers and divers. We see tarpons, moray eels and schools of tiny fish.

“What the developers fail to see,” says Tamara, “is the bigger picture of the entire ecosystem.”

By bringing divers here, she maintains a presence and monitors any attempts to start construction.

Enrique gives me a lift to my second Maya homestay, Kiichpam Kaax, near the small town of Chunhuhub in the remote jungle of central southern Yucatán. Its founder, Damian Gomez, was a barman in big Cancún hotels for 17 years. He experienced the damage mass tourism can inflict: sinking into alcoholism and watching his home community slowly die. Eventually he resigned, bought a hectare of land back home, and started building. Now there is a busy restaurant and a string of comfortable cabins on a lovely organic farm, often staffed by foreign volunteers. 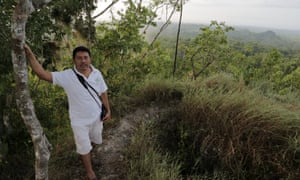 Damian turns out to be a man who really understands what the more curious visitor might want. Very early on my second day, we jump into his pick-up and rattle off to an area of thick primary jungle. After a half-hour trek, we begin to wind up a strange little hill in this otherwise flat landscape. It gets steeper and steeper until we are grabbing at tree trunks and lianas to haul ourselves up. Only as we approach the summit do I notice that the path is actually a flight of stone steps that has almost been buried in jungle leaf-fall. Damian grins. “Yes. This is an ancient pyramid – one of many. No archaeologist has ever explored this place.” 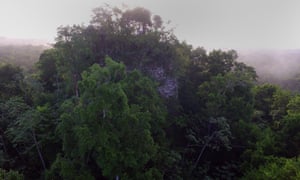 We emerge on the top, a small stone platform with a central hole now choked with vegetation. All around are magnificent views of rainforest: rags of cloud hang in the tallest trees, a toucan flies over and a distant tree shudders as a gang of monkeys feed. We stand in awed silence, watching the sun rise.

On our route back we pass through very traditional-looking villages: most houses still neatly thatched. At one house we stop to buy rare and delicious melipona honey, made by a stingless Yucatán bee. We meet Don Severo, a 75-year-old chiclero, or chewing gum collector. Once, the resin of the wild chicle tree was the basis of all gum, but artificial substitutes have largely replaced it now. “There used to be hundreds of us chicleros,” Don Severo says. “I would spend weeks out in the jungle with my father. There were many jaguars in those days.” 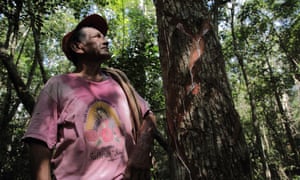 He takes us into the jungle, identifies a chicle tree and, with astounding agility, shins up it to make a series of swift cuts to the bark with his machete. The white resin drips down channels he has made into a bottle. “It’s tastier and you don’t get tired chewing it,” says Don Severo.

Leaving the resin to gather, we make our way to a nearby cenote, called Ja’am Tu’un. A steep jungle path leads down to a mysterious deep hole with sheer limestone cliffs and aerial roots all around. After an exhilarating leap into the deep turquoise water, I clamber out up a rickety bamboo ladder. I’m just drying off when a party of locals arrive: they are students from the nearby village and one of them invites us back to the family home. It’s the final hours of the Day of the Dead celebrations and the house is busily preparing to receive visitors. The women are making massive meat pies under the thatched roof, while the men get the fire pit ready.

After sunset, a Maya priest arrives to say prayers, encouraging the souls of ancestors to visit and join in the festivities. Friends and neighbours gather; lollipops are handed out, then coffee in gourd cups followed by plastic beakers holding boiled pumpkin and sugar cane. Older women in traditional embroidered smocks appear. 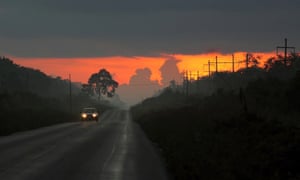 One woman explains to me how, after two miscarriages, she was unbearably sad until the names of her lost babies were remembered in the ceremony and flowers laid in the streets to guide them home. “Everyone gets something from this celebration,” she says.

I sit back and enjoy the scene: the table laden with steaming pies, the chatter of children, and the dogs and chickens lurking, hoping for crumbs. The people’s faces in profile carry echoes of ancient stone reliefs on lost temples.

Newcomers are greeted in Mayan: “Baaxkawalik?” Literally, what do you say? Answer: “Miixba.” (Nothing!) The only Spanish spoken now is for my benefit.

I recall something Juanito had said, about how the Maya were never defeated by the conquistadores, that they just retreated into their jungles and waited. Now I see what he meant. The real Yucatán is still there, hidden away from the concrete jungle of the coast, the so-called Riviera Maya, and it’s waiting to be rediscovered.

The trip was provided by Sumak Travel (020 3642 4246, sumak-travel.org) which promotes local community tours and initiatives. A 10-day overland tour, including accommodation, transfers, excursions and most meals costs from £1,950pp (based on two sharing). Direct return flights from Gatwick to Cancún cost from £479.