Elena Ferrante fever spread across the globe with the release of the author’s Neapolitan novels, but it took the success of the acclaimed TV adaptation, My Brilliant Friend, for the hype to come full circle back to Rione Luzzatti, the neighbourhood east of the city centre where the bildungsroman unfurls.

As the eight-episode series, which ended last night, gripped viewers, locals felt compelled to harness the attention Ferrante has brought to their once-disregarded corner of Naples. In keeping with the Neapolitan tradition of street art, a mural is to grace the walls of the neighbourhood’s fascist-era public library, Biblioteca Andreoli, behind the central station.

The mural is to be completed this week by Eduardo Castaldo, the photographer for the HBO and Rai Fiction adaptation. Castaldo uses blown-up cutouts of the photographs he took of the show’s stars on set, spliced into sections and pasted onto shadowy silhouettes on the library walls. Flanking the entrance to the library and below a painted “Biblioteca Popolare” sign, figures of the book’s two main characters, friends Lila Cerullo and Lenù Greco, their elementary school teacher, Maestra Oliviero, and the librarian, Maestro Ferraro, will decorate the otherwise austere building.

Only a year ago, visitors enquiring about My Brilliant Friend in the neighbourhood were met blankly, but as the TV series reached its denouement, elegantly dressed pensioners could be seen passing time in the parish piazza, comparing this fictional portrait of their youth with their own childhood memories.

Rione Luzzatti is a gritty, working-class area but a couple of elderly female friends were keen to stress that: “We are not ignorant or violent people,” as they chatted to a group of students who had requested a school trip to the Rione after seeing the series.

“We should be grateful that Elena Ferrante has raised up our isolated corner of the city,” responded local writer Maurizio Pagano lightheartedly, leading the teenagers towards the library. 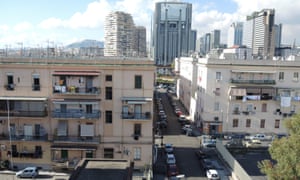 Pagano, who is at the helm of the mural project, has spent the last year in the library co-authoring, with Francesco Russo, The World of Elena Ferrante’s Quartet, a book which traces the events and history of the Rione as it relates to the tetralogy. Pointing to a framed sepia photograph of the real-life library founder, Maestro Collina, Pagano explained: “We wanted to mark the significant role the library has had, not only on the immediate community but for the author and her millions of readers.” Castaldo has included the photograph of the real-life Maestro Collina in the mural: it is held by the fictional librarian Maestro Ferrara, as he sits on a bench next to a pile of books.

10 of the best pizzerias in Naples

The tradition of street art in Naples can be traced back to the graffiti etched on to the walls of nearby Pompeii and it is no wonder the residents of the Rione are already planning another mural – a portrait of Lila and Lenù’s faces on a six-storey housing block, made possible by an ongoing community crowdfunding project.

Today, murals by contemporary artists such as Banksy and Dutch–Neapolitan Jorit Agoch can be found all over the city, emblazoned on the walls of housing projects and 18th-century buildings. Popular Naples mayor Luigi de Magistris has encouraged the graffitisti, writing on his Facebook page that the murals “fit into the context of the city’s social and political revolutionary drive”.

As Pagano completed his tour of the Rione, the students begged him to run a creative writing course, so that they can “learn to write books and be rich, just like Elena Ferrante”. Perhaps the newly decorated library will inspire another picaresque success story. Meanwhile, the murals, the books and, of course, the television series, have ensured that Rione Luzzatti will become a destination for Ferrante fans visiting Naples in 2019.

Sophia Seymour is a Naples-based documentary-maker, writer and the founder of Looking for Lila