The last time I went on a package holiday France had just won the World Cup. It was 1998, the peak of the package’s popularity, and my mates and I celebrated the end of our exams with a week in Magaluf. We had a brilliant time but it wasn’t an experience I’ve ever felt the need to repeat – until now.

Twenty years on, France have won the World Cup once again and packages seem tempting again. When I confess this, friends look at me askance and make jokes about piña coladas. One is moved to reminisce about her own youthful package holiday; she is still traumatised by the coach excursions.

But package holidays have changed. The modern version is a far cry from stereotypical packages past, when reps upsold dismal day trips and all the food came with chips. Britain’s two biggest tour operators, Tui (formerly Thomson) and Thomas Cook, have branched out into boutique packages, with well-designed hotels, healthy food and interesting excursions. In June Thomas Cook launched Cook’s Club, a more affordable version of its upmarket Casa Cook brand but still with a design focus. Next year the first long-haul Casa Cook will open in Mauritius, with swim-up rooms, a 50m swimming pool and a yoga pavilion. 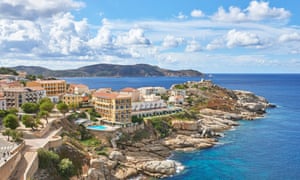 The package holiday as we know it can be traced back to 1950, when Horizon Holidays took 11 Brits on an all-inclusive trip to Corsica. The flights-plus-accommodation formula was a hit and soon transformed the way the nation holidayed, tempting people away from bracing British seaside resorts to balmy Mediterranean beaches. However, after five decades of growth, the advent of budget airlines and the internet seemed to sound their death knell. The era of DIY travel beckoned. In 2003, independent travel overtook packages for the first time, with 53% of holidaymakers organising their own trips abroad rather than using a tour operator. By 2008, just 37% of Britons went on a package holiday. And this year, Thomas Cook is likely to kill off its Club 18-30 packages, saying millennials are more interested in Instagram-friendly “ego travel”.

It may come as a surprise, then, to learn that package holidays in 2018 are not just surviving but are thriving once more. Or perhaps it won’t, if you are one of the 51% of Britons who went on a package holiday last year. Their popularity has been growing for the past few years: 2017 bookings were up 8% year-on-year, according to Abta, while Lastminute.com reported an annual increase of 28%. Mintel estimates a further growth of 7.5% by 2022. And it’s not just summer holidays – Jet2holidays has many winter packages for 2018/19 on sale.

Why, when DIY trips are easier and cheaper than ever, are people returning to ready-made holidays? First, convenience: Abta’s report into holiday habits reveals that 75% of people choose a package because “everything is taken care of”. Second, cost: 58% book because they see packages as the “best-value option for price”. Third, peace of mind: people want to know they will be looked after in the event of a terrorist attack or other major incident and, after the recent collapse of several travel companies, including Monarch, that they have Atol protection. Then there’s the Love Island effect – Lastminute.com suggests the popularity of the reality show and other TV programmes, such as Benidorm, has had an impact. 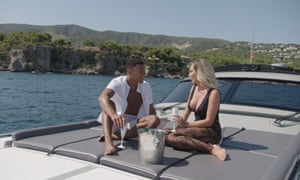 Packages are particularly popular with older people (63% of over-65s chose a package in 2016) but they have been re-embraced by all age groups, especially young families (62% booked a package in 2017) and 18-to-24-year-olds (55% in 2016). They cross class divides, with luxury packages recently taking off – 62% of people in social grade A booked a package in 2017, compared with just 23% in 2015. All-inclusive packages are also on the rise, perhaps because people want to know exactly how much they are spending in the face of a volatile pound and uncertainty over Brexit. Thomas Cook’s all-inclusive bookings, for example, are up 10% year-on-year.

But surely another reason for the resurgence is that package holidays have seriously upped their game.

I stayed at the first Cook’s Club hotel in Hersonissos, Crete, which is aimed at young, design-savvy, price-conscious customers. The 148 rooms are described as “luxe-minimalist” (ie simple-but-stylish), with a faintly industrial vibe, lots of neutral colours and the odd bright print. It is mostly millennials lounging around the pool while the all-day DJs play chillout tunes but not everyone is under 30. The Cantina dishes up local food such as octopus salad and lamb stew, plus “global street food”, and the poolside bar serves on-trend spritzers and barrel-aged cocktails. There is a spa – and the beach is 150 metres away. 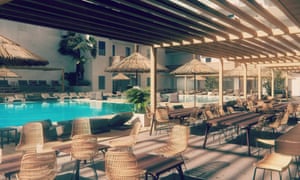 Hersonissos is a resort town on the north-east of the island, not far from the party hotspot of Malia. There is little traditional Cretan culture here – my taxi driver tells me that the town exists only for tourists, and shuts down completely in winter. But the sandy beach is pleasant, there is a mountain backdrop and it is not far to the capital, Heraklion (which has a world-class archaeological museum), and the lively harbour town of Agios Nikolaos.

There are still excursions on offer – but thankfully, not a coach trip in sight. Thomas Cook has partnered with a Cretan company, Hellenic Zeus, whose guides have real expertise. I went horse-riding along the beach and into the mountains; sailed to the dragon-shaped island of Dia and explored historic sites such as Spinalonga, an island off the north-east coast with a long history, from Venetian fort to 20th-century leper colony, accompanied by a Greek archaeologist.

When Casa Cook launched in Rhodes in 2016 it was originally aimed at younger people but ended up pricing them out and attracting older people instead. The company realised there was a market for a cheaper brand with fewer frills, and Cook’s Club was born.

“We are moving away from one size fits all,” said Peter Fankhauser, Thomas Cook’s CEO, who plans to open 10-15 Cook’s Club hotels by next summer. He explained that good design is still a priority for those on a tighter budget: “Our research has shown that an Instagrammable hotel is more and more important.” (A third of travellers surveyed in the Thomas Cook Holiday Report 2018 said the hotel was more important to them than the destination.) .

Thomas Cook’s rival, Tui, is also reinventing the package holiday. The Tui Blue brand launched in 2016, with three new hotels opening this year, taking the total to seven, and many more are planned. As with Cook’s Club, Tui Blue strives for decor inspired by traditional architecture, regional food and local guides. Locations include Mallorca, Portugal, Italy and Turkey. 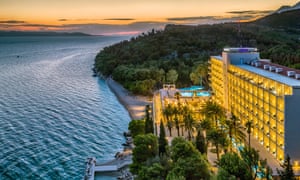 I stayed at Tui Blue Jadran in Tučepi, Croatia, which opened in the new format last year. Tučepi is a small resort on the Makarska Riviera, between Split and Dubrovnik, with a 3km pebbly beach. While the town is low-key, the hotel’s beachside setting is sensational, with the islands of Hvar and Brač in front and the Biokovo nature park behind. (The Jadran hotel also has a fascinating history: it was the first hotel on Croatia’s Adriatic coast, built for President Tito in 1948 and used by Yugoslavia’s secret police.)

There is a focus on “wellness” at Tui Blue, with a programme of daily fitness classes included in the price. I started the day with yoga under the pine trees, did back-strength and circuit-training sessions, and went paddleboarding (watersports cost extra). Again, the excursions are impressive. I went on an army jeep safari into the Biokovo mountains and went ziplining; other options include boat trips to Hvar and Brač, with a visit to the winery on Brač – where the hotel’s wine is produced. The hotel also serves its own olive oil and beef, has an onsite bakery and offers lots of vegetarian and vegan dishes. 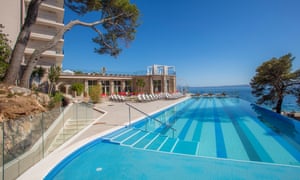 Compared with Cook’s Club’s stripped-back style, Tui Blue Jadran is more luxurious, with 161 rooms, three restaurants, two pools (plus a private one in the swim-up suites) and a beach. That, of course, is reflected in the price. .

Some people will always be sniffy about package holidays and all-inclusive deals in particular are problematic. I certainly haven’t given up on independent travel – but I don’t think it will be another 20 years until my next package.

Looking for a holiday with a difference? Browse Guardian Holidays now to find a range of fantastic trips