It’s midway through a weekday afternoon and I am waiting – in a dank, dark basement – for a ghost. Christopher Kelly, who runs the shop upstairs, says he hears her all the time. “She sobs for ages,” he says. “It’s quite upsetting.”

Alas, 20 cold and patient minutes later the only sounds I’ve heard have been the voices and footsteps of the very-much-alive shoppers on the street above. The ghostly girl – said to have been the spirit of a 19th-century teenage servant who was raped by her master and then murdered by her enraged mistress – obviously isn’t home.

This is 35 Stonegate, at 700 years old one of the oldest buildings in York and positively teeming with ghosts – it’s now run as a visitor attraction called Haunted (hauntedhouseyork.co.uk), so you can hang around in its shadowy, panelled rooms in the hope of hearing sounds from beyond the grave. Even if the sobbing woman in the basement isn’t doing her stuff, there are plenty more restless souls to seek out: the little girl who fell to her death from the back of the house, for example, or the grey lady still searching for her lost lover. There’s even a feline ghoul – apparently a cat was once bricked up here during building work, and its desperate scratching can still sometimes be heard.

The house was oddly peaceful on my visit (though glance at the visitors’ book, and you’ll see that it’s often anything but); but no matter, because York is so packed with ghosts that you’re almost guaranteed to hear, or feel, or sense, or even, if all else fails, imagine a ghost somewhere as you prowl around the narrow, gabled streets that often (and especially at night) look much as they did hundreds of years ago. There are reputed to be more than 500 ghosts here, and if you believe the blurb from the tourism office, it’s officially the most haunted city in Europe.

That status is being celebrated this week in the city’s annual Illuminating York festival, which will see images of some of the colourful characters from York’s past (Dick Turpin, Guy Fawkes et al) projected onto its historic buildings. The fringe events are dripping with ghouls – tea at Betty’s will be accompanied by ghost stories by candlelight, and there are torchlit tours of the Castle Museum during which you’ll hear sinister tales about its days as the city’s prison. 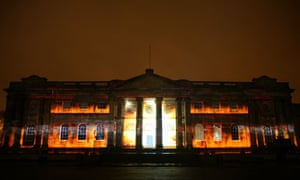 Perhaps unsurprisingly, there are almost as many ghost walks in York as there are ghosts. Mark Graham, who has been running the Original Ghost Walk of York (theoriginalghostwalkofyork.co.uk) for 29 years, was one of the first, and he’s still one of the best. An hour-long wander around the narrow city streets after dark with him is like taking a tour of a graveyard with an undertaker (and with his long dark coat, stick and black gloves, that’s clearly the look he’s aiming for). But the best thing about Mark is that he has the delivery and panache of a great storyteller: he brings to life (if that’s the right way to describe it) tales like those of Mad Alice, who still haunts the lane where she lived before she was hanged at York Castle in the 19th century, and Roger de Clifford, who was hanged at his eponymous tower in the town centre, and his body then displayed for a year and a day afterwards (sometimes, apparently, you can still catch a glimpse of it).

Over at Coppergate Shopping Centre, site of a Viking fort, it seems an archaeological dig has disturbed spirits that had been lying dormant for centuries. And now, Mark reports, they’re back with a vengeance: doors in various shops have been mysteriously wrenched off their hinges; and Marks & Spencer seems to have unwittingly recruited shelf-stackers from “the other side”, and the regular staff have had to get used to goods being moved overnight from one part of the store to another.

The city’s basements seem especially fertile territory for ghost-spotting, and one of the most compelling tales is that of Harry Martindale, who in 1953 was an apprentice plumber installing a new central heating system at the Treasurer’s House beside the Minster (which, itself, sits on the site of a Roman fort). Take the Ghost Cellar Tour there (nationaltrust.org.uk/treasurershouse) and you’ll hear how he had to down tools and stand to one side while a whole column of Roman soldiers marched through. Martindale (who is still alive, and who not long ago visited the basement again for the first time since 1953) reported that the men wore green tunics and carried round shields – but at the time, that didn’t tally with what historians knew. Then a few years later another site nearby was unearthed, and the spine-tingling discovery was made that the Romans who lived there used round shields – and wore green tunics.

For those who want a disturbed night there’s no shortage of hotels that claim a spirit clientele alongside the paying guests. Topping the list is the Golden Fleece (thegoldenfleeceyork.co.uk, doubles from £90 per night, B&B) where, among many other ghosts, there’s a second world war airman who wakes guests up by touching them with an icy hand. And even at hotels that don’t especially consider themselves haunted, such as the Dean Court opposite the Minster (deancourt-york.co.uk, doubles from £145-£175 per night, B&B) there have been occasional reports of guests being woken with the oddest sensation that something – or someone – has been trying to drag them from their bed …