Northern Ireland’s toned-down answer to Newquay has a cheerful holiday vibe thanks to the swarms of beginners splashing around in the waves, in contrast to the more serious nature of some of the wilder and more remote surf spots found in this part of the world – especially to the west in Donegal. Portrush offers two options, West Strand (usually bigger) and East Strand, and like the rest of the breaks along this coastline they’re oriented in a generally northerly direction, which means the region’s prevailing winds are offshore, creating wonderful “clean” waves.

Lessons and board hire From £30 for two hours, boards £12 a day at Troggs Surf School.

Where to eat Check out the surf action with coffee and cake at Babushka Kitchen Café above West Strand. 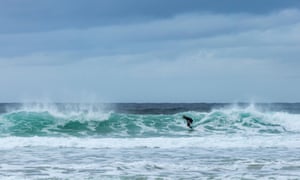 The isle of Lewis and Harris has some of the most consistent waves in northern Europe thanks to its exposed location on the eastern edge of the Atlantic. And because of the Gulf Stream, the water isn’t as cold as you might expect (as high as 16C in the autumn). Add magnificent white sand beaches to that and if you catch it when the sun’s shining on a clean swell, you’ll consider the journey well worthwhile. Crowds are not an issue here and there’s usually a friendly vibe in the water, but bear in mind the isolation of the breaks when surfing in more challenging conditions, or if you’re inexperienced – novices should certainly be wary of going it alone.

Where to eat The nearby Uig Sands restaurant has superb sea views and is famed for its smoked Scottish salmon.

Where to stay Ardroil Campsite (01851 672248, no website) is a basic community-run site with a toilet/shower/kitchen block situated above the beach; it operates on a donation system. 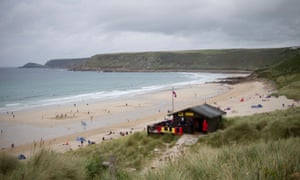 A gorgeous swathe of pale sand and crystal-clear sea curves from Sennen Cove up towards Gwynver Beach, and provides the most consistent beach breaks in Cornwall (although Gwynver’s bigger breaks are better left to experienced wave riders). Sennen crams a village, surf shop, surf school, beach restaurant and busy car park between the sea, the cliffs and the steep sand dunes, and it’s always a hive of activity – but somehow there always seem to be enough waves to go around. The south end of the beach, where the waves are always smaller and more user-friendly, is perfect for beginners.

Lessons and board hire £30 for two hours at Sennen Surfing Centre; boards £13 a day from Sennen Beach.

Where to eat The Surf Beach Bar, which as the name suggests is right above the beach.

Where to stay The family-run Trevedra Farm campsite (from £7.50 adult, £4 child + £3.50 tent pitch) above Gwynver has marvellous coastal views. 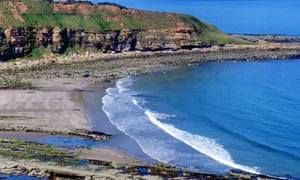 Surfers have been riding the waves here since the 1960s, thanks to its proximity to Edinburgh and its reasonably mellow right-hand point break at the south end of the bay on good swells. This breaks over a cobble and sand bottom and can be pretty shallow at low tides, so you need to be reasonably competent to tackle it. There’s also a left-hander breaking off a sandbar at the north end of the bay. Autumn sees water temperatures at their highest – a balmy 14C.

Where to eat Try Graze Coffee & Chocolate House in Dunbar – the toasted Belgian waffles with a warm chocolate shot are particularly appealing after a cold session in the North Sea.

Where to stay Meadowhead’s Mortonhall park has static caravans above the beach, but its campsite at nearby Belhaven Bay in the John Muir Country Park is a more attractive option (two people + tent from £19.80). 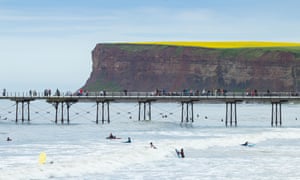 This is the first place I ever surfed, and I’ve been riding the waves here with Nick Noble and Gary Rogers, the affable owners of the beachside surf shop and kit hire businesses, since 1979. The inclusive, down-to-earth vibe I encountered back then is still evident today as surfers of all abilities enjoy the beach breaks either side of the Victorian pier, and nearby there are some of the best and most challenging reef breaks to be found in England. Above the beach, one of the world’s oldest water-powered funicular railways runs up the sea cliffs to the neat streets of Saltburn-by-the-Sea, built under instruction from God by steel magnate and Quaker Henry Pease in the 1860s.

Lessons and board hire £30 for two hours, boards £5 an hour at Saltburn Surf .

Where to eat Watch the surf action with coffee and cake at the seafront Camfields Espresso Bar.

Where to stay A few miles down the coast at Robin Hood’s Bay (which also gets surf), Bay Ness Farm (from £10 a night) has some of the best sea views in Yorkshire. 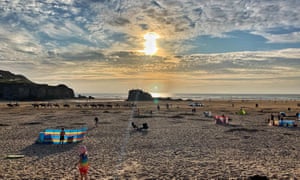 It can be a bit of a zoo here on a good swell (the best waves tend to occur around low tide) but with so many surfers about, the buzz is reassuring if you’re a novice. If you’re looking to escape the crowds that’s easy enough – just leg it north up the huge expanse of Perran Sands, where you’ll find beach break peaks that are far less busy than the main beach, but beware of rips on bigger swells. There’s also a good right-hander breaking off Ligger Point at the very north end of Perran Sands, although it’s a slog to get there.

Lessons and board hire £30 for two hours, boards from £7 a day at Piran Surf.

Where to eat The Watering Hole is the obvious spot – it’s literally on the beach.

Where to stay Tollgate Farm (from £5.50 adult, £2.50 child + £7 tent pitch) has access to Perran Sands through the dunes above the beach. 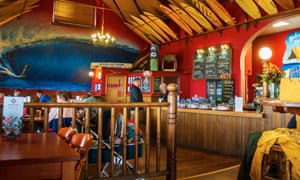 Woolacombe is a beginner-friendly surf spot with mellow beach breaks, although it will certainly appeal to experienced surfers looking for bigger swells – especially as Croyde, the other local spot, is invariably far busier. At high tide a right breaks off the rocks at the northern end of the beach, which is what attracts experienced wave riders, and there are some decent low-tide peaks to be found in little Combesgate Beach just a bit further north. Most of the action at Woolacombe is right in front of the town, but since the beach stretches south for three miles you can avoid the inevitable crowds with a bit of a walk.

Lessons and board hire £38 for two hours, boards from £6 a day at Hunter.

Where to eat The Red Barn, which opened in early 2019, is in a prime location right above the beach. 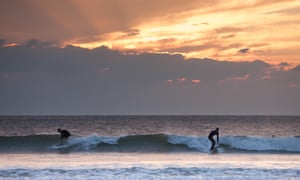 The consistent beach breaks found here attract everyone from boogie boarders to longboarders. The peaks at Hillend, at the northern end of the three-mile strand, are the easiest to access and therefore the busiest, and you’ll always find surfers enjoying picnics and barbecues or just hanging out in the car park in the dunes above the beach. On bigger swells, paddling out at Langennith can be a real mission, with line after line of white water rolling relentlessly shorewards, so you’ll need some experience to attempt them. Avoid overcrowded waves by walking south towards Rhossili and, if you have the energy after surfing, climb Rhossili Downs above the beach for some of the best coastal views in Wales.

Lessons and board hire From £22 at Llangennith Surf School, boards £12 a day at PJ’s Surf Shop.

Where to eat Eddy’s Café at Hillend campsite (see below) is the most convenient après-surf hangout.

Where to stay Hillend Caravan & Camping Park (tent for family of five or up to three adults from £21) above the beach is an appealing spot, but it can get very busy. 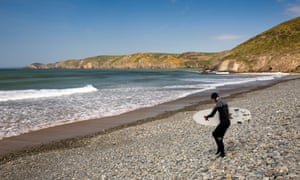 One of the most accessible beaches in Pembrokeshire, two-mile-long Newgale has parking above most of its length, with the main surf action opposite the surf shop/school and campsite at the north end. There are beach break peaks all along it, and on smaller swells they’re pretty mellow – ideal for beginners and longboarders – but once it gets above head-high, paddling out is excruciatingly hard work. When I surf here I take time to scan the length of the beach before deciding where to paddle out, since a quick recce will invariably reveal a peak or two with few if any surfers on it.

Lessons and board hire £35 for three hours at The Big Blue Experience, boards from £6 an hour at Newsurf.

Where to eat Sands Café is conveniently located near the surf school.

Where to stay Newgale Campsite (£8 adult, £4 child) at the north end of the beach is literally seconds from the surf. 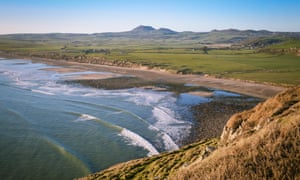 This is a vast stretch of sand and shingle at the southern tip of the lovely Llŷn peninsula, with beach breaks along its length plus a small reef at the north-west end of the bay, which will interest more experienced surfers. The beach break peaks along the rest of the bay are ideal for beginners (I did a lot of my early wave riding here) although you’ll need to watch out for rips on bigger swells – there’s a healthy and talented population of experienced local surfers ready to rip when a good swell hits. Porth Neigwl is known as Hell’s Mouth in English, but expect to hear Welsh being spoken out in the surf; the Llŷn peninsula is a hub of Welsh culture.

Lessons and board hire £35 for two hours, boards £10 a day at West Coast Surf Shop in Abersoch, three miles to the east.

Where to eat There’s nothing at the beach, but Mickey’s Boatyard & Beach Café in Abersoch is a good post-surf option.

Where to stay Treheli Farm campsite (tent pitch £15) is right above the beach.