During lockdown, visions of Greece, and particularly my old home in the southern Peloponnese, were by turns sustaining and tormenting me. It was the outside life, the beaches, the mountains, the cicada chirps and the cheese pies that were calling. So I was determined to be on the first flight back with my daughter, who was born in Kalamata and, as luck would have it, could celebrate her 14th birthday in the area. 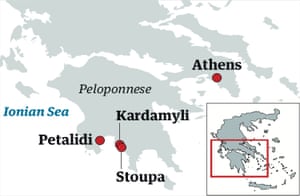 The first challenge, of course, was getting there. Unless you are the prime minister’s father, this had to wait until 15 July, when Greece started accepting direct flights from the UK. We flew in the next day on the first charter flight – to the island of Lemnos – and then made our way to the Peloponnese via Athens. Direct flights to Kalamata start on 25 July.

The scene at Gatwick airport was pretty calm: the plane was about two-thirds full, allowing for a bit of distancing (we had three seats between two). At the Greek end, however, it felt celebratory, with airport staff very pleased to see us. Then came the serious business. Visitors have to fill in an online form before travelling, and on-arrival testing is decided on your responses. 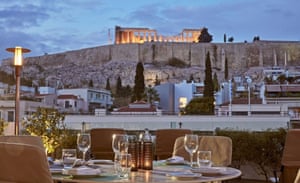 About half of us had to undergo a procedure that is a little unpleasant, involving a throat swab. Anyone testing positive would have been informed within 24 hours, and then have to isolate for 14 days at a hotel paid for by the Greek government. Greece is, understandably, keeping a close eye on all this as so far it has recorded a very low infection rate.

Normally, the tour representative would have been meeting 40 people a week off flights, but on this first flight it was less than 10. Even so, she could not have been happier to see us, and had to resist physically greet us.

We were the first UK visitors for a while to stay in our overnight hotel, the Herodion in Athens, and the staff and Greek customers on the roof terrace overlooking the Parthenon that night were equally enthusiastic in welcoming us. Normally during high season, a place like this, with the old marbles floodlit beside us, would be fully booked.

The next day we drove south into the Peloponnese. Fourteen years ago, when my daughter was born, this would have been a four-and-a-half-hour trip, but new toll roads have reduced it to three. Admittedly, it’s not quite as breathtaking a journey , but it’s still a spectacular drive through the mountains, past some of the best historical sites in Greece – Corinth (we stopped at the canal as it has the best roadside souvlaki joint going), the old ruins of Mycenae, the stadium at Nemea and Sparta all flashed by between the cypress trees and the olive groves. 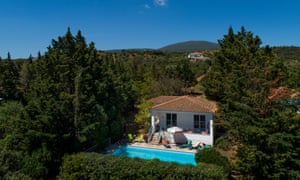 We were heading for an isolated villa, Kalamaki Katerina, near Petalidi, on the western prong of the Peloponnese. This would have been an excellent place to spend lockdown, sitting half a kilometre up a dirt track, with a pool overlooking the mountains of the Mani opposite. In fact, it’s one of the things that makes this area so special: even in busy times, this corner attracts “discerning” tourists, both Greek and foreign, who know rural Greece well. There’s nothing complicated about this, as always it’s about location and a bit of care with the details. Our villa was simple, but well cared for, and the views were drinkable.

It also came with a complimentary meal at a local taverna. Anywhere else this would probably have been a nondescript place by the beach; here it was in a tourist-free mountain village. We almost drove past it as we were looking at the church over the road, but the taverna itself was an old stone building with about five tables on its plane tree-covered terrace. There were no menus and when we were ready for lunch, we were ushered into the kitchen to see what was cooking and make our choice. Soutzoukakia (meatballs in sauce), slow-cooked beef (which came apart with a spoon) and gigantes beans are fairly normal Greek fare. Here it was simple but superb. 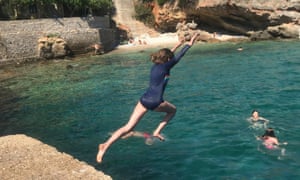 Kardamyli, on the coast of the middle Peloponnese finger opposite us, is a bit more sophisticated, and we headed there after a couple of days. We also used to live here, so the drive over brought back many memories. The village has a certain cachet with writers and artists. It’s not hard to see why. Despite development over the past 20 years, the buildings are all traditionally beautiful, and behind it the Taygetos mountains tower above the sea. There are a few more trendy shops than 10 years ago (olives and wine), but the thin main road still cuts straight through the village, leading to hilarious mini traffic jams, and the manavi vans, piled with fruit veg, still weave through announcing their wares via a loudspeaker.

Denia, an old friend, is fiercely proud of her family business, Trigilidas Travel, founded back in 1974 in Kalamata. She had reopened the Kardamyli office a couple of weeks ago, but said that in a normal season it would have been open from May. For July, the village is notably quiet, but there were a few European tourists here, and there is a palpable sense of relief among the locals who rely on their business for survival. My daughter bought a beach wrap from a little shop on the high street. The old guy behind the counter stared at it for a moment and then announced: “You are my first sale, on the first day of my new season.”

Though British tourists were thin on the ground, we met a family by the village swimming jetty who had booked a private rental a while back, but then had their flights cancelled. Rather than give up, they managed a workaround, flying via Amsterdam and then driving from Athens, like us. They were delighted to be in the village and, I felt, rather proud to be pioneering “Greece returners”.

My daughter’s birthday was spent in two venues in the village, both of which have had to introduce new measures due to the virus. Cake was at Androuvista, or Anna’s as locals know it, where the eponymous owner and her brother wear masks, have set up a sanitation station and disinfect religiously. The Happy Beads shop up the road is run by an English couple who have been here for 16 years. They confided that lockdown, enforced much more strictly here than in the UK, had been scary, but they were slowly getting used to being open again and were hopeful about the rest of the season. The saddest loss for Kardamyli had been the cancellation of the International Jazz Festival, normally held in May.

Later that day, we headed south to the sandy beaches of Stoupa. Busier than Kardamyli, and with a few more foreigners around, it was still quiet for the time of year. We stopped in to see friends who run Dive Code in Kalogria – this is definitively the beach that the real Zorba danced on, despite the novel and film being set in Crete. They said trade was picking up slowly and they were about to take out a party of Dutch tourists. 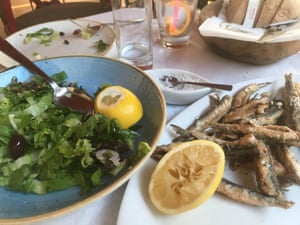 The landscape of the Exo (outer) Mani cries out for exploration, and hiking is a great way to do it. Kardamyli is the base for an excellent tour firm called 2407, a reference to the height in metres of the Peloponnese’s tallest peak, easily seen from the village. They offer advice and a range of excursions but July is too hot for hiking, at least for this old man, so we drove up into the mountains as far Kastania, only 560 metres above the beaches but a world away.

This remarkable little village has at least nine churches, the oldest 1,000 years old, with 13th-century frescoes that have been recently restored. Much more modern, although you wouldn’t guess it, is the 19th-century Dourakis tower house – a mini castle built to defend the local clan. It has also been restored, and after 20 odd years I was finally able to explore its surprising number of levels. We ate in the simple taverna next door, accompanied by a couple of old Greek guys and served by the cook’s grandson.

Greek food is often uncomplicated, but that doesn’t mean it can’t be spectacular. Above all, seafood is worth trying in Kardamyli, and there are plenty of options. Hotanineas taverna was a new discovery for me, but I knew the spot, right by a mini swimming platform with sunsets like a dream. Kardamyli does have a glorious pebble beach to the north, but swimming in town off the concrete quays is a joy, especially after dreaming of being here so often during lockdown. At the taverna, the key is to ignore menus and look at what’s in the fridge. We chose a fagri (red porgy, I believe) grilled whole with oil and lemon, plus octopus, taramosalata (not the bright pink variety you might be thinking about) and marouli (just lettuce and olives in oil). The taverna wasn’t packed, staff wore masks, but it was the Greece I had been missing. We went back the next night.

Holiday parks: How one UK holiday park went above and beyond during coronavirus lockdown

Walks near me: Best walking routes near Bristol
We and our partners use cookies on this site to improve our service, perform analytics, personalize advertising, measure advertising performance, and remember website preferences.Ok