Daredevil Julianna Oliveira shared a snap of her seeming to stare death in the face while taking in the jaw-dropping views Rio de Janeiro has to offer.

The young traveller hiked her way up the Pedra da Gávea mountain which towers nearly 3,000ft above the vibrant blue South Atlantic ocean.

Brazenly sunbathing on the precipice of the cliff, it looks like Julianna could be risking it all for the sake of an impressive photo to show her friends.

But we think there’s something fishy going on and she’s not as courageous as she looks.

Other “brave” tourists who’ve visited the area in Brazil have been caught out for faking their vertigo-inducing stunts.

The beautiful backdrop looks suspiciously similar to the place where hundreds of tourists flock to and take trick photos where they appear to be hanging off the edge of a cliff but in fact they’re only a metre off the ground. 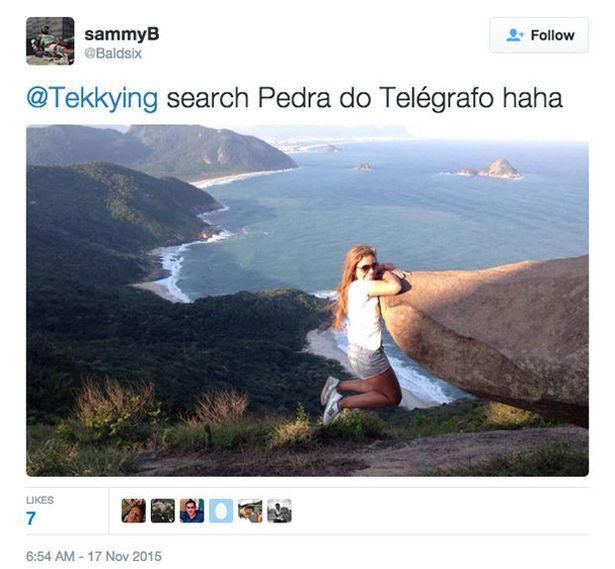 Brazilian bodybuilder Luis Fernando Candela made jaws drop everywhere with a snap of him dangerously dangling off a rock using only his feet and the help of his rock-hard abs.

Luis claimed that it was his “most dangerous” stunt yet and the photo got shared around the world.

He said: “My girlfriend was terrified but I was determined to get the photo.

“You've got to know what you're doing though because if you fall you've had it – the drop is too much.

“I’ve been doing it for years now and love it – you only get one life so you have to live it, there's no fun in being boring.

"The experience was amazing – terrifying, but amazing.”

But the most impressive thing about the snapshot was his use of the crop feature on his camera phone.

Other adventurers gave the game away by showing the uncropped view of the area, which reveals that it’s not dangerous at all.

And while we can't be sure, we suspect this new "death-defying" photo might be just as misleading – at least we hope so otherwise that's some scary s***.