With each passing year, the opening of new air routes reshapes our mental map of Europe. Once-favoured way stations on rail and ferry itineraries from England to the Alps have slipped from visibility. Areas on the near continent previously feted by English artists and writers are now bypassed. Where in the past an Italian grand tour might have included a few nights along the way in the Moselle or Rhine valleys, today’s travellers jet directly to their main destination. As recently as the 1960s, many travellers to Savoy might have stopped en route in the Jura (straddling the French-Swiss border), and the Vosges region to its north was a popular stepping stone en route to the Black Forest.

But the rail routes of yesteryear are still there: across Europe myriad small towns, often distant from the smaller airports that serve budget airlines, make perfect short-break destinations for those inclined to take the train.

The launch this month of a new four-day Interrail pass (valid for any four days within a one-month period) gives the opportunity to break the journey on both the outbound and homebound legs. And with prices starting from €185 in second class and €246 in first (for 12-27-year-olds), it’s easy to plan outward and return journeys on different routes, thereby making the journey itself as important as the destination.

Here are three rail trip ideas worth considering in 2020.

A taste of Burgundy 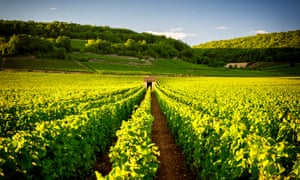 Trains still stop a the villages of Gevrey-Chambertin and Meursault, as they have done every day since this stretch of the classic line from Paris to the French Riviera opened in 1849. These days it is mainly locals and dedicated wine lovers who use this line, where the station names sound like a roll call of great Burgundy wines: Gevrey-Chambertin, Vougeot, Nuits-Saints-Georges, Beaune, Meursault and Rully. And in all these places it is just a short step from the platform to the vineyards.

Those in the know opt for Beaune as a base. The striking walled town claims to be the wine capital of Burgundy, but lovers of the region’s crisp white chardonnay or silky pinot noir often regard Beaune as the wine capital of the world. There is a clutch of fine hotels in the town centre, with Hôtel Le Cep (doubles from €169 room-only) offering enough creature comforts and fine wines to satisfy the most fastidious oenophile. Try the set lunch in the hotel’s Michelin-starred restaurant (€28 for two courses).

But the beauty of Beaune is that you don’t need to spend that sort of money. On my last visit, in November, I stayed at the modestly priced but very comfortable Hôtel de France (doubles from €55.80) right by the railway station, whose restaurant, Le Tast’Vin, offers good, unpretentious fare (two-course lunch €16).

Beaune is eminently walkable. The town centre, a 15-minute stroll from the station, has more boutique businesses devoted to wine than one town really deserves. Thomas Javouhey and his team at Domaine des Vins will guide visitors through the essence of Burgundy with small tasting measures. 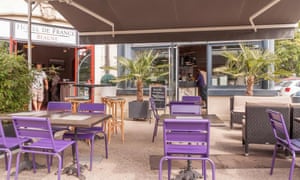 The Hospices de Beaune, a former charitable hospital, is considered one of the finest examples of French 15th-century architecture. It is also one of the largest vineyard owners in the region, and every November hosts a three-day festival celebrating the food and wines of Burgundy to coincide with its annual wine auction, run by Christie’s. It also houses the extraordinarily beautiful Last Judgment altarpiece, painted in around 1445-1450 by Rogier van der Weyden.

From Beaune, it’s an easy cycle on quiet roads to Auxey-Duresses, passing (and sampling) the wines of Pommard, Volnay and Monthelie along the way. Or you can push out further and explore the 60km Route des Grands Crus.

Those travelling on an Interrail pass could make a day trip by train to Nevers in the Loire Valley, just two hours away on a direct regional service from Beaune. Nevers is a historic town known for its long tradition of fine faïence porcelain manufacture. It’s one of those unsung places that are instantly appealing, with a gothic/romanesque cathedral and an imposing ducal palace.

From here there’s a direct train back to Paris – on the Ligne du Bourbonnais, which is another splendid provincial route, with its own feast of vineyards. The line runs through the chalky vineyards where Pouilly-Fumé is produced, with fine views over to Sancerre on the other bank of the Loire.

Train details Beaune is about six hours by train from London with one change in Paris (Gare du Nord to Gare de Bercy, where trains for Beaune depart). Return fares start at about £120 with Rail Europe; or use a four-day Interrail pass (supplements for Eurostar travel). A good plan is an overnight stop in Paris, a few days in Beaune then, on the morning of departure, make the detour to Nevers, spending the rest of that day exploring there, returning from Nevers to London, via Paris, the following day. 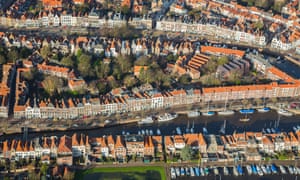 For decades, the natural route to the Netherlands for Londoners was by paddle steamer from Queenborough, on the Isle of Sheppey in north Kent, to Vlissingen on the Dutch coast, which the British invariably referred to as Flushing. From there, the usual first stop was Middelburg, just four miles inland. Generations of British travellers, clutching their Baedeker or Murray guidebooks, used to stop overnight in Middelburg, but with the demise of the Flushing ferry in 1989, Middelburg slipped from the English horizon.

Yet Middelburg is as lovely as ever and makes a perfect introduction to the Netherlands. This Zeeland town on the North Sea feels a long way from the big Dutch cities. Rotterdam is two hours away by train; Amsterdam is three. It’s hard to credit these days, but Middelburg was once a global force in maritime trade, and during the Renaissance was a European leader in the development of optical and maritime instruments: the telescope was invented here.

Middelburg’s maritime and fashion history can be explored at the Zeeuws museum before relaxing over a beer at De Vliegende Hollander on leafy Damplein square. The best rooms and food are at new boutique hotel and brasserie Franklin (doubles from €105 room-only) in a gorgeous 18th-century building on the pedestrianised Vlasmarkt. 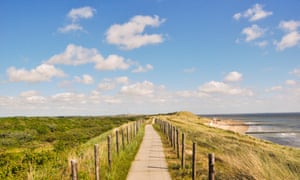 Middelburg is perfect for just wandering and enjoying cobbled streets and cosy cafes, but it’s also worth venturing out of town to see the windy surroundings. There are sea views aplenty of course, but the wind can be trying, so it’s no surprise that low-slung recumbent bicycles are very popular here. Bikes can be rented in town and it’s an easy pedal out on the well-signed cycleway to seaside Domburg and the remarkable dyke route along the coast to Westkapelle, where the fish soup at Brasserie De Zeezot wins accolades from far and wide.

Train details Middelburg is 5¼ hours by train from London with a change in Rotterdam. Return fares at b-europe.com start at about €128. A stay in Middelburg combines nicely with an overnight stop in Brussels or Antwerp. Note that at present there are no direct Eurostar services from Rotterdam back to London, so passengers have to disembark in Brussels and pass through UK immigration, which adds about an hour to the journey time. A direct Rotterdam-London Eurostar is expected to start this spring. 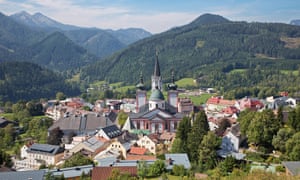 The launch next week of a new twice-weekly direct overnight train from Brussels to Vienna makes it much easier to take short breaks by rail to Austria. My top tip for an unusual trip is Mariazell, in a soft, forested landscape where the Alps dip towards the Danube valley. Mariazell is three hours by train from the nearest airport (Vienna), so the town has never figured on major tourist routes. It has, however, held a special appeal in Catholic Europe since a 12th-century monk built a shrine (zell) on the spot where a rock miraculously broke apart. A steady stream of pilgrims, many arriving on foot clutching rosary beads, come every year to experience the peculiar devotional energy of this town in the Austrian hills.

The final leg to Mariazell is along a narrow-gauge line from the town of Sankt Pölten. This 57-mile line was built as a forestry railway, but now rates as one of finest branch lines in the Alps.

You don’t need any inclination for prayer to enjoy Mariazell’s fine setting and homespun charm. It is a perfect base for exploring. An easy walk from the town centre takes in a circuit around the Erlaufsee’s tranquil green waters, and to the south, there’s a fine ramble through the rocky Salza gorge.

There’s a superb one-day bus and train circuit from Mariazell. From the bus station, just below Hauptplatz, bus no 172 makes the 27-mile journey over the Seeberg Saddle to Bruck-an-der-Mur (€8 one way). From there, hourly trains run on the Unesco-listed Semmering Railway to Vienna for an afternoon of urban diversions before a return via Sankt Pölten to Mariazell in the evening. 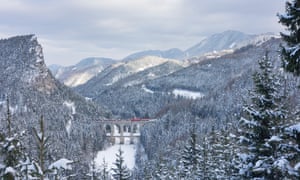 There’s a clutch of decent hotels in Mariazell – modern pilgrims evidently demand creature comforts. Book well in advance for the well-appointed Brauhaus Mariazell (doubles from €52), also the best spot in town to sample the local beer. At Hotel Goldenes Kreuz (from €57pp), the Scherfler family offer “a dose of pure Austria”, with schnitzel and strudel galore. And it is just a short step from the basilica for those who need forgiveness for overindulgence.

Train details Leave London at lunchtime, changing in Brussels and Sankt Pölten, to arrive in Mariazell by mid-morning the following day. The 13-hour overnight journey from Brussels to Sankt Pölten is on an ÖBB (Austrian Railways) Nightjet train. With an Interrail pass (four days in one month) you could return by day train with an overnight stop in the Rhine Valley. Otherwise, book returns from London to Brussels on Eurostar and then Brussels to Mariazell and back with oebb.at. A modest extra fee for couchette or sleeping car accommodation is always a wise investment on night trains.

• Nicky Gardner is co-author of Europe by Rail: The Definitive Guide. The 16th edition will available later this month