The Lost Valley of Glen Coe isn’t hard to find. The path to it starts at a car park on the A82, crosses the glen and River Coe, then starts to ascend. After a nerve-racking narrow stretch above a gorge, the route continues, curving round boulders and crossing the river again via stepping stones. Then, there it is – the Lost Valley or Coire Gabhail, hemmed in by the steep sides of two ridges. Three hundred years ago it made the perfect hiding place for the Macdonald clan’s rustled cattle (its Gaelic name means the Hollow of the Capture). Today, it’s an idyllic spot for walkers and wild campers – we could just make out a tent on the valley floor. 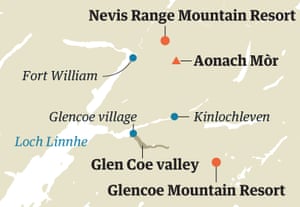 A couple who had passed us earlier, one carrying skis, the other a snowboard, were long gone, presumably up on one of the just-visible patches of snow. Shafts of hazy sunlight shone on the valley floor. In a film the scene would have been set to rousing music.

Instead the silence was broken by the persistent buzz of a drone operated by a dad as his teenage daughter sat on a rock staring intently at her phone. Not that I’m judging. We had our own reluctant walker – our nine-year son, Ossian.

“I hate this,” he’d screamed into the wind as we tackled the Devil’s Staircase two days earlier. The route zigzags up the north side of the glen to the highest point of the 96-mile West Highland Way, with views of the Mamores mountains further north. To the east is Aonoch Eagach, the UK’s most exposed ridge walk, just 45cm at its narrowest point. The Devil’s Staircase is so called because some of the men building the nearby Blackwater dam in 1909 didn’t make it home after a night drinking in the Kingshouse Hotel – the devil “claimed them” as they staggered back over the pass in the dark. 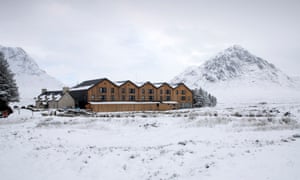 The original hotel is still there, but today it is dwarfed by a modern, three-storey stone and wood extension that opened in April, with 57 bedrooms. The £12m building was roundly criticised by the National Trust, the John Muir Trust and Mountaineering Scotland for not blending in with its surroundings. The design, they said, was too industrial; the John Muir Trust called it a “barracks-style block.”

Which is a bit harsh. The design may not be classic Highlands – the Clachaig Inn down the road offers that – but it’s no blot on the landscape. Big windows in the bar and restaurant make the most of the majestic setting, with views of one of Scotland’s most recognisable mountains, the pyramidal Buachaille Etive Mòr. The bar saw a steady flow of weary walkers who’d just crossed the desolate expanse of Rannoch Moor on stage six of the West Highland Way, and the restaurant menu caters to hikers’ appetites. Starters of game broth or double-baked mull cheddar soufflé were followed by estate-reared venison or rump of Argyll lamb, with a hot toddy cheesecake to round it off. 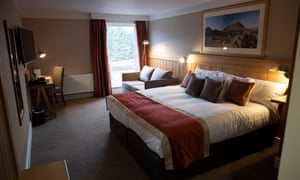 Glen Coe is a 10-mile valley of brutal beauty. Hulking peaks loom on either side, and fault lines look like a giant claw has slashed the mountainsides from top to bottom. It’s nature at its most forbidding.

The 1692 Glen Coe massacre – when soldiers loyal to William III of England and led by general Robert Campbell turned on the Macdonalds – is remembered in a film at the revamped National Trust visitor centre, and more bluntly at the entrance to the Clachaig Inn, where a sign reads, “No Hawkers and no Campbells.”

The Clachaig is a whitewashed hotel and pub that stocks 365 malt whiskies, 100 Scottish gins and a roster of craft ales, cider and stouts. The walls are decorated with old ice picks, and we can imagine the tales of climbing feats and woes that must have been told here over the years. The bedrooms are smaller and not as smart as those at Kingshouse, but the setting is every bit as stunning. 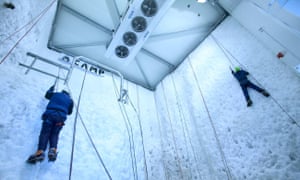 Travelling to Fort William on the Caledonian Sleeper (which launches its new carriages on the Highland route on 13 October) is like watching a trailer for a film – the scenery rolling past provides glimpses of the drama ahead – but nothing quite prepares you for standing in the midst of it. There were moments when the landscape was so wild and vast it felt unreal. Yet even here, overtourism is an issue. Coaches clog the A82 and fill the car parks with passengers doing “Scotland in a day” – which is madness given how much there is to explore and how many walks are waiting to be tackled (Walking Highlands lists 33 in Glen Coe and Kinlochleven alone).

But walking isn’t the only activity on offer. This area of north-west Scotland is one of the adventure capitals of the UK. On day two of our trip, we drove the short distance from the Kingshouse Hotel to the Glencoe Mountain ski resort. Opened in 1956, Glencoe Mountain is the oldest but smallest of Scotland’s five ski resorts, with seven lifts (eight from this winter) serving 20 runs on Meall a’Bhuiridh mountain, including the UK’s steepest black run, the Flypaper. If you’re not there in winter for the skiing – and conditions can be variable even then – you can use the lifts to access mountain bike trails for all abilities (May until end of October). Unfortunately, our attempt to ski was scuppered by rain so we headed to the cafe for a hot chocolate. 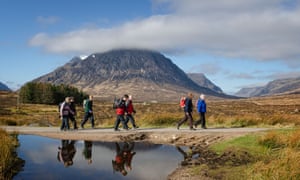 There was no chance of poor conditions at our next stop: the Ice Factor in Kinlochleven, the world’s largest indoor ice-climbing wall. Too young to tackle the ice, Ossian had a lesson on the rock climbing wall (£24) while my partner and I practised swinging a pick into the pocked ice face above our heads and hauling ourselves up (also £24). It was slow, hard work but I imagine graduating from this giant freezer to a frozen waterfall is thrilling.

After the climbing centre we drove along the north side of Loch Leven to the seafood cafe of the same name and ordered oysters, Loch Linnhe langoustines and spaghetti with local clams. The 13-mile trail around the loch offers an alternative for anyone who doesn’t want to tackle a mountainside. On the southern shore of the loch you pass Eilean a’ Chombraidh, or the ‘Isle of Discussion’, where members of the Macdonald clan were sent to settle arguments. Apparently they were dispatched with a supply of cheese, oatcakes and whisky to ease discussions.

On our final day we headed to the Nevis Range Mountain Experience just north of Fort William to try mountain biking. There we met local biking talent Louise Ferguson, who showed immense patience with our slow progress along a gentle forest trail (£45pp). It was Ossian’s first experience of cycling on rough terrain and he found it challenging. But he absolutely loved the next activity, the Tree Adventure course in nearby Leanachan forest (adult £27.50, child £17.50). He happily leapt off an 11-metre high platform for the finale, whereas I had to do the climb of shame back down when I bottled it at the top. 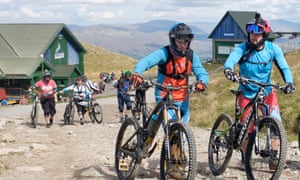 Still, onwards and upwards – literally, as we boarded the gondola up Britain’s ninth-highest mountain, Aonach Mòr (from £15). The view from the top is of mile upon mile of rugged peaks, as far as the summit of Askival on the Isle of Rum on a clear day.

We had packed a lot into just five days, but from the top of Aonach Mòr it was clear that this wildly beautiful landscape offers a lifetime of adventure.

• The trip was provided by Visit Scotland. Doubles at the Kingshouse Hotel start at £125 BB or £35pp in the bunkhouse. Rooms at the Clachaig Inn start at £132 B&B. Train travel was provided by Caledonian Sleeper; classic rooms cost from £140 one-way (solo) or £170 (shared)