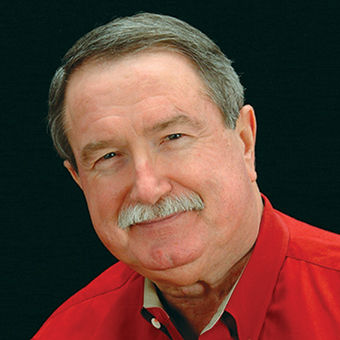 With this column, contributing editor Charlie Funk concludes 14 years as a Travel Weekly columnist. A working travel advisor since 1993, Charlie and his wife, Sherrie, were inducted into the CLIA Hall of Fame in 2012. The Funks sold their agency, Just Cruisin’ Plus, in October 2021; their current company, CSF Travel Consulting, advises retail agencies on marketing, sales, operations and IT. On behalf of Travel Weekly and its readers, a heartfelt thank you, Charlie, for your years of dedicated service to your clients and our readers. — Arnie Weissmann

When I was younger (i.e., in the middle of another century), I was willing to give almost anything a shot. I had developed an interest in aviation at the age of 2, and it never went away. I loved building model airplanes, both for display and later to equip with a small engine and fly in circles at the end of two thin wires.

All this created a yearning to fly for the U.S. Air Force. I would have paid them to let me fly as a fighter pilot, but it wasn’t to be; myopia blocked that path.

Nonetheless, I applied for flight training and traveled to a nearby Air Force base for testing. Visual acuity, depth perception — all things vision — were excellent.

What had changed? I don’t have enough room to tell the full story, but let’s just say that I showed the ophthalmologist who gave me a retinal exam the first set of contact lenses he had seen.

College, marriage, making a living and adulting took over my life. Priorities change, leisure time all but disappears and one finds oneself losing track of once-treasured hobbies and avocations.

The first cruise I ever took that lasted more than two days was on the Britanis in 1984. It was a mere shadow of a cruise ship compared to the 1,800 passenger liners of Carnival, Royal Caribbean and Norwegian. But there is only one first cruise, and I was hooked.

Since then my wife, Sherrie, and I have been blessed to enjoy well over 100 cruises and have marveled at the changes in the industry. A “large” ship has grown from 1,800 passengers to the Icon of the Seas, debuting in 2024, which will carry almost 10,000 passengers and crew. It’s a certainty that some on the ship will come from hometowns smaller than that ship’s capacity.

Over the years, our tastes changed, and we generally prefer smaller ships with low passenger counts that have very large space-to-passenger ratios and more creature comforts. Cruises that are mostly or all-inclusive are our go-to choices, primarily for the simplicity.

And as it turns out, we’ve became a bit jaded on oceangoing cruises, especially those with ports of call where we’ve previously been.

That brings us to the discovery of river cruising in 2000 on the Viking Burgundy. In retrospect, this fugitive from Russian river cruising with fixed-to-the-floor single beds in tiny rooms was a learning experience all along its French itinerary from Chalon-sur-Saone to Avignon. But we loved it. And it won’t be long before we have completed a dozen river cruises in Europe.

Even though we have repeated some itineraries four times, we’ve come to enjoy the general constancy of ship size and passenger accommodations. It’s true that some are more space efficient than others, some have better public area lighting or more lavish decor, better cuisine, a superior wine list, etc. But for us, river cruising is that old pair of supercomfortable shoes you put on every evening after work.

It’s like this: Sometimes one identifies a fulfilling life and/or career path that can’t be fulfilled. The key is to keep looking for where you fit. We’ve all heard the adage, “Find something you love to do and someone who will pay you do it.” It’s true. Thank you for your readership for the past 14 years.