Inside Disneyland Paris as it marks its 30th birthday in style – there’s a stunning display by twinkling drones and Sleeping Beauty Castle has had a refurb with 41,200 sheets of gold leaf

Every day already feels like a party at Disneyland Paris but this year, there is more to celebrate than usual.

Following intermittent closures during the pandemic, the French theme park has now fully reopened in time to usher in its 30th year. And this being Disney, you can expect something a little more extravagant than a birthday cake to mark the occasion.

I visited with my son for the launch of the festivities and found celebrations already in full swing at Europe’s number one tourist attraction. The number 30 is emblazoned everywhere from the main entrance to the Mickey-shaped balloons sold on Main Street. All paths still lead to the iconic pink Sleeping Beauty Castle but even this has been spruced up for the occasion, with a mammoth renovation requiring 370 gallons of paint and 41,200 sheets of gold leaf applied by hand. Soaring 141 feet tall against a blissfully blue Parisian sky, the sight is enough to impress even a resolutely princess-averse eight-year-old boy.

The iconic pink Sleeping Beauty Castle, pictured, has been spruced up for Disneyland Paris’s 30th year, with a mammoth renovation requiring 370 gallons of paint and 41,200 sheets of gold leaf applied by hand

Other additions are more unexpected. In front of the castle, there’s a themed kinetic art installation where 30 Disney and Pixar sculptures including ones from Big Hero 6 and Mulan suddenly appear to come to life as we walk by.

Menus in the 59 restaurants across Disneyland Paris have also had a 30th-anniversary makeover. 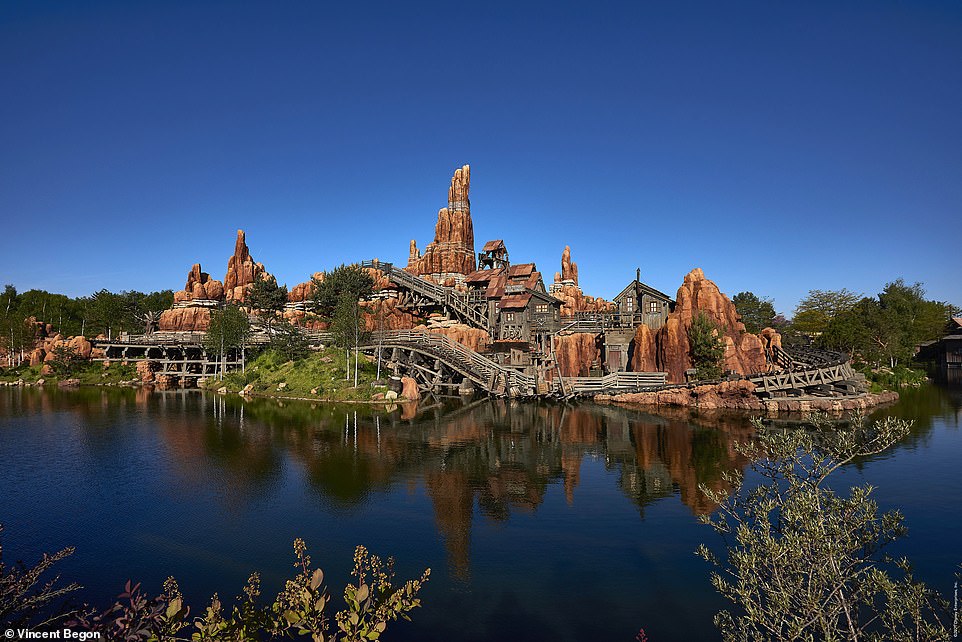 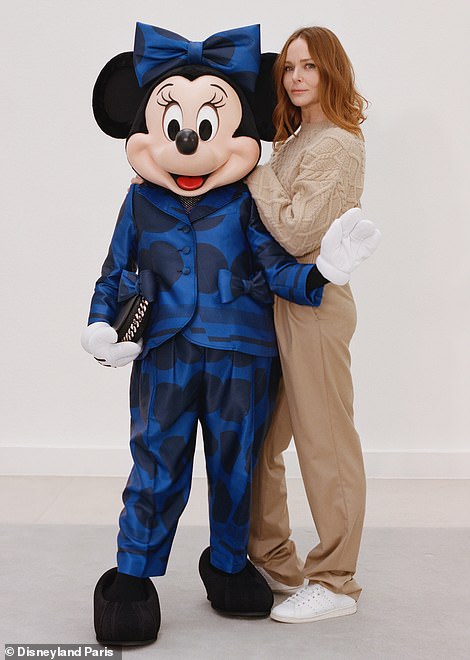 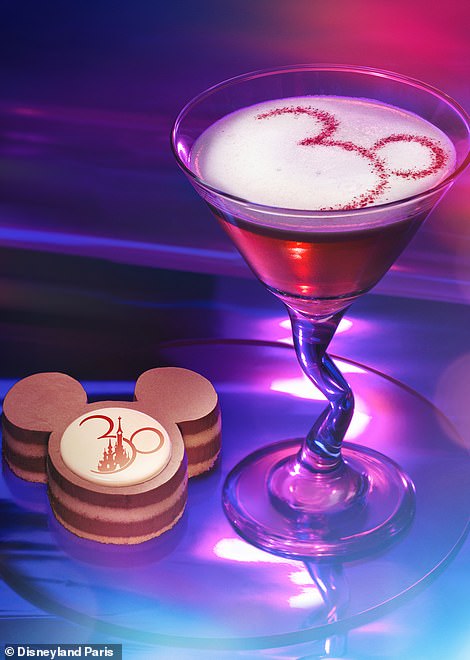 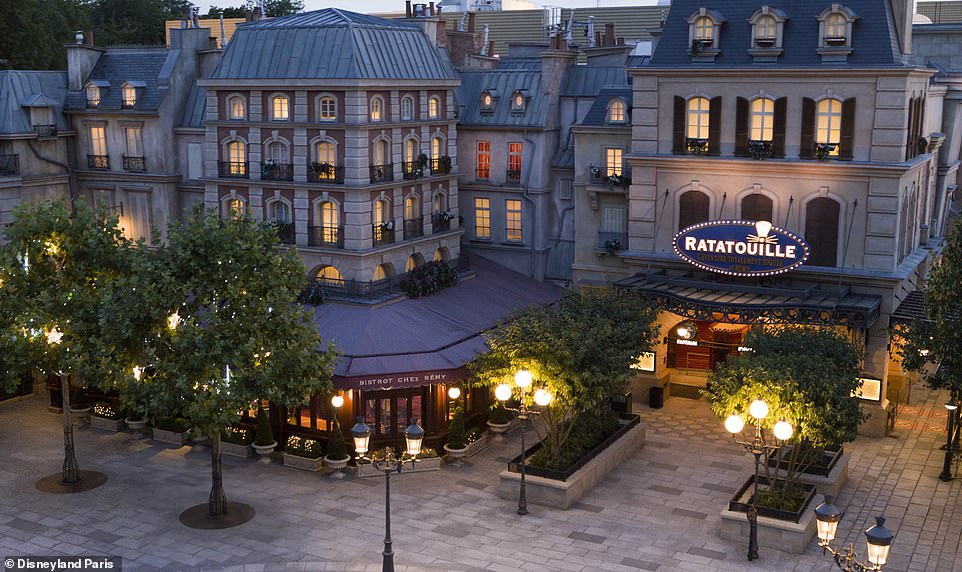 Siobhan experiences the 4D world of Ratatouille, which is located in the Walt Disney Studios Park 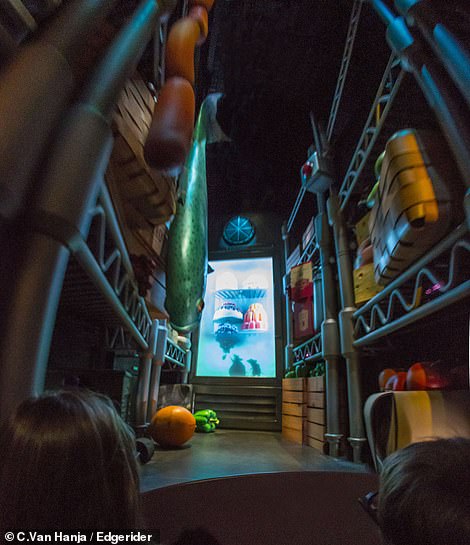 A glimpse inside the Ratatouille ride at Disneyland Paris

There are more than 60 new dishes to order including a vegan panini and Mickey Mouse-shaped pizza, but it’s the new range of distinctly French desserts that get our thumbs up, including rainbow-coloured macarons decorated with the obligatory ‘30’, Mickey-shaped cookies on sticks and a feather-light white chocolate and strawberry dome cake.

Fuelled by – much needed – sugar, we tackle the rides with renewed determination, with Big Thunder Mountain, Pirates of the Caribbean and the Star Wars simulator Star Tours proving the biggest hits in Disneyland Park.

Just next door in Walt Disney Studios Park, we plummet to the floor on the Toy Story-themed Parachute Drop, experience the 4D world of Ratatouille and brave the Nemo-inspired spinning roller coaster Crush’s Coaster (twice!)

Yet for all the thrills and spills, it’s the old-fashioned Disney charm that really wows my son. He giggles gleefully when he’s tickled by a giant Goofy as they pose for a photo together and gladly receives a bear hug from Mickey, dressed in his brand new iridescent 30th-anniversary outfit. 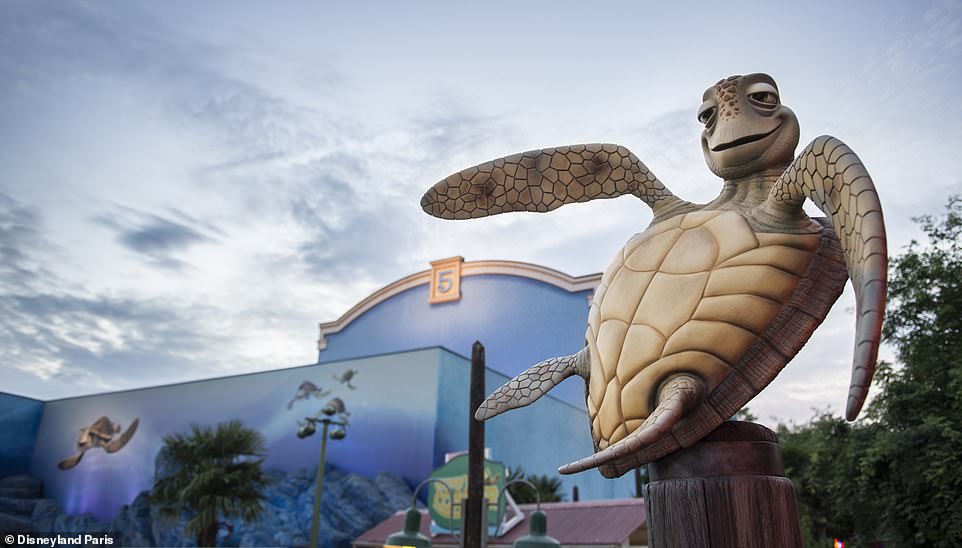 Siobhan and her son enjoy Crush’s Coaster so much that they go on it a second time. The spinning roller coaster ride is inspired by Finding Nemo 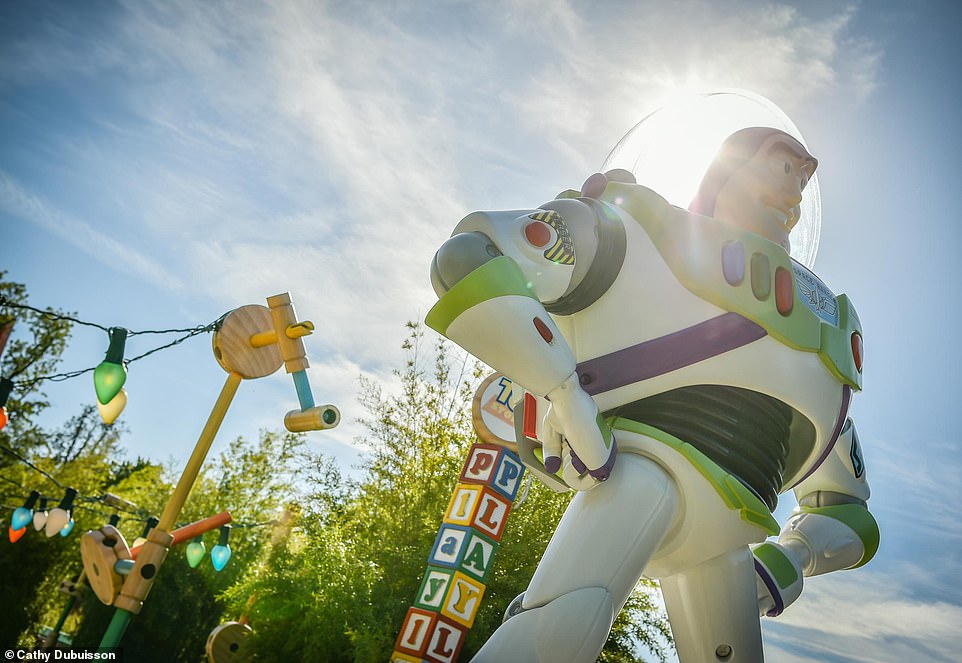 ‘We plummet to the floor on the Toy Story-themed Parachute Drop,’ writes Siobhan. Pictured is the statue of Buzz Lightyear at the entrance to the ride 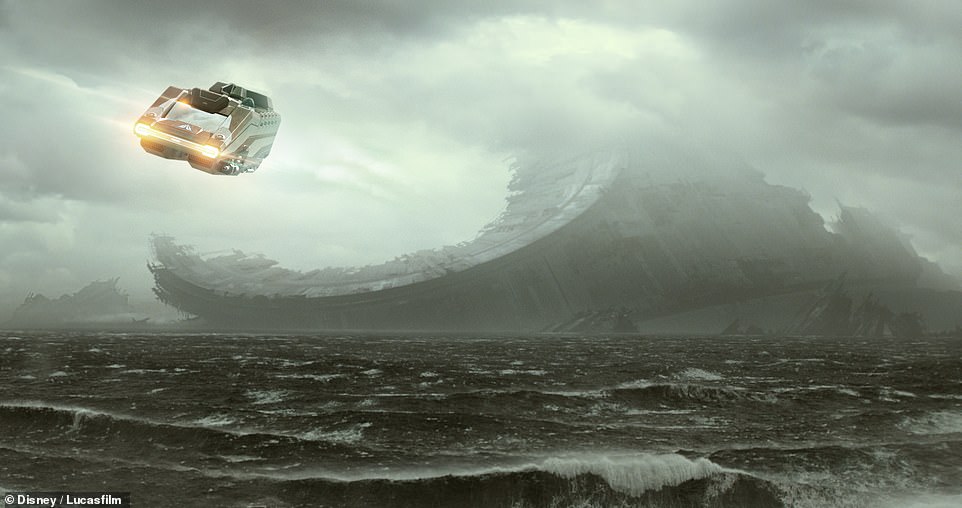 The Star Wars simulator Star Tours (shown above) proves to be one of the biggest hits in Disneyland Park, says Siobhan 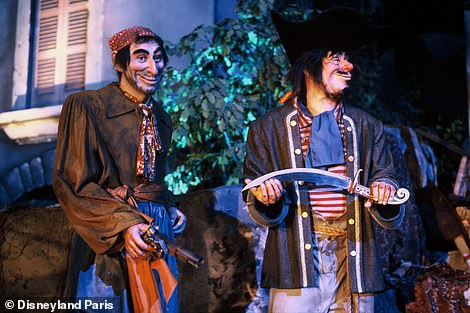 Over in Walt Disney Studios Park, he barely bats an eyelid at the long queue to meet characters from Marvel’s Avengers and declares the wait well worth it once he’s raced against Black Panther and even promised Captain America he’ll be good in school.

It’s fair to say he’ll be keen to return once the dedicated new Avengers Campus opens later this year with rides based on blockbuster movies such as Spider-Man and Iron Man. 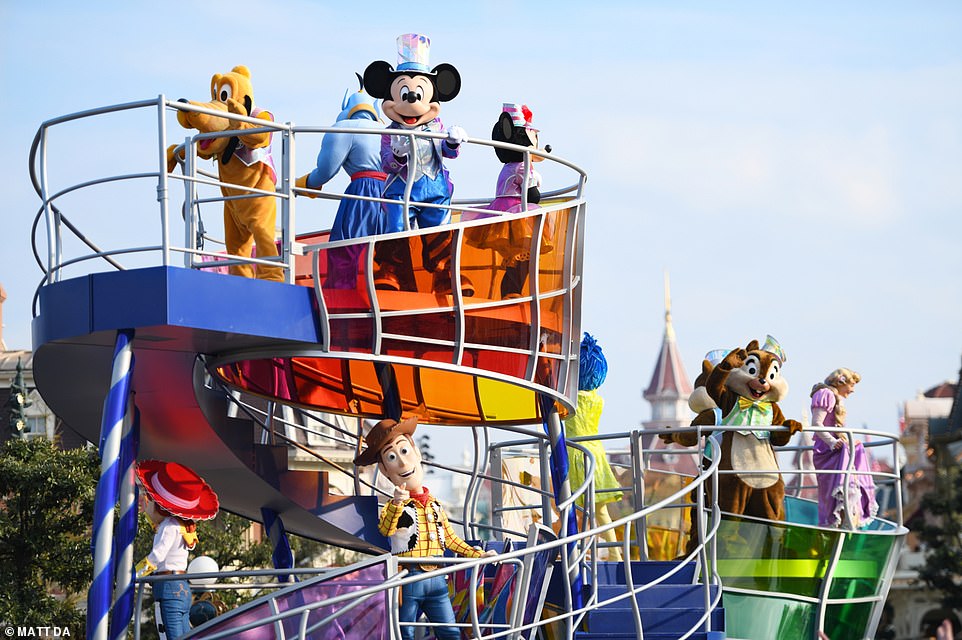 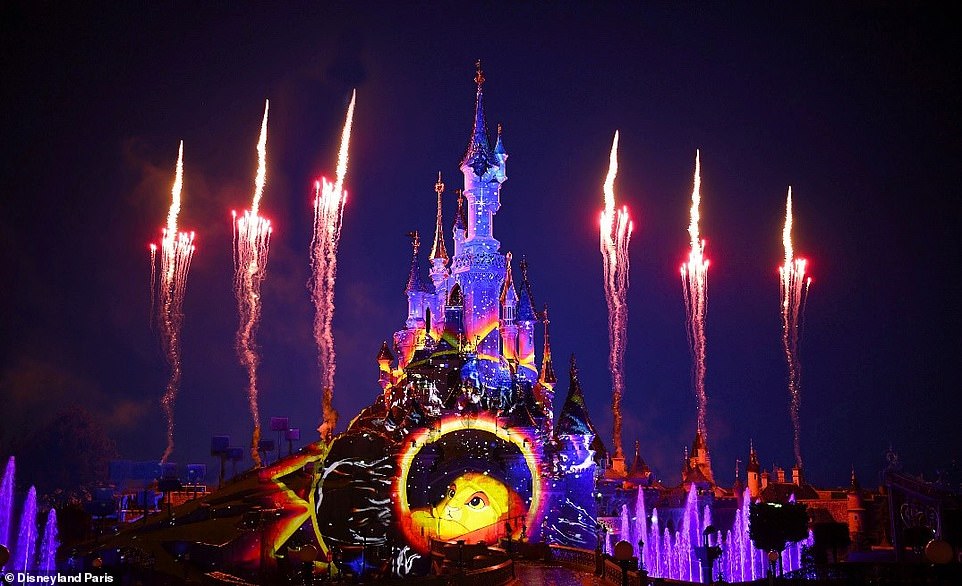 Above is the ‘revamped’ nightly firework show, which includes elaborate projections of characters from films including The Lion King on Sleeping Beauty Castle

But the real magic happens after dark. The nightly firework show has been revamped in dramatic Disney fashion, with illuminated dancing fountains, lasers and elaborate projections of characters from films including Frozen, Star Wars and The Lion King on Sleeping Beauty Castle.

Finally, over 200 illuminated drones form a twinkling ‘30’ high in the sky in a dazzling state-of-the-art display that leaves the crowd open-mouthed.

Turns out every day at Disneyland Paris ends with a happy ever after.

A two-night stay on May 3 at Disneyland Paris starts from £344 per person including accommodation at Disney’s Sequoia Lodge, three-day park entry and return Eurostar from London St Pancras via Lille. The price is based on two adults and two children aged three to nine sharing a standard room. Book at www.disneyholidays.co.uk.

Eurostar reopens its direct service to Disneyland Paris from London St Pancras on March 25. Fares start at £39 one-way for adults, based on a return journey, and £28 one-way for children aged between four and 11. Book at www.eurostar.com.