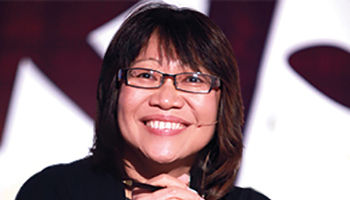 Yeoh Siew Hoon, editorial director of Northstar Travel Media Asia, is
the founder and editor of Web in Travel, a content and community
platform for online travel professionals in the Asia-Pacific region.

I recently made my first cross-border trip in Southeast Asia in two years. That’s how long our neighbors’ borders have been closed to us in Singapore. My first destination was Siem Reap, Cambodia, because it was the first country to open with the least restrictions — on-arrival antigen rapid test, no quarantine — and I felt it ought to be applauded.

Nevertheless, I had to wait until Singapore placed Cambodia on its list of Vaccinated Travel Lanes before I could get there without being quarantined on return. That’s how cautious governments in Southeast Asia still are about reopening their borders. They come with different conditions that unfortunately make it confusing for travelers, so unless you are desperate, intrepid or opportunistic like me, most of us are still not travelling en masse in our own backyard.

I first visited Siem Reap circa 1995 when it had just opened to international tourism. Then, the best way to appreciate the scale and grandeur of the Angkor temples was by aerial view from a military helicopter because going by foot was still hazardous due to land mines and snakes. There were very few visitors then, only the adventurous, and mostly from Europe and the U.S.

This visit felt a bit like the return to those days: a quieter Siem Reap with very few visitors, only travelers like me who want to experience this special place before the return of mass tourism and in a selfish way, hoping those days do not return to the way it was.

Postcards: And I don’t think I am alone in wanting a return to slower, better and more sustainable travel for a destination like Cambodia. Those in the industry, even with all their suffering and struggling these past two years, are desiring change because they feel Cambodia deserves better.

As we drive through Siem Reap, it feels like a city newly awoken from a long slumber. It’s only in the past couple of months that life has returned to normal and the government has signaled it’s time to live with the virus, and locals are re-learning to welcome visitors as we are re-learning how to be guests.

The staff at Viroth’s Hotel was beyond welcoming and gracious. “We are so happy to have you back,” they said, as they show off with pride their hotel facilities and services. In the evening, as we walk out, they spray us with natural insect repellant. “We don’t want anything to bite you,” they say.

Our local friends are proud to tell us how Siem Reap has changed for the better for them. It feels like a big, little town. New roads — wide, multilane, newly paved. Bicycle paths have been introduced in the city and around the temples. There’s a new public park. “I know you in Singapore are used to [having public parks], but this is our first,” said Dara Huot of Phare Cambodian Circus, which entertained arrivals with performances at the airport.

At the Ta Phrom temples, I see joss sticks at an altar near one of the head carvings hidden within the roots. Locals have come back to the temples for prayers and offerings. “Before they stayed away because of too many tourists. These past two years, locals have rediscovered their own temples,” said Dara. The temples have once again become part of daily lives, beyond being tourist attractions.

Ta Phrom is the temple made famous by Angelina Jolie in the movie, “Lara Croft: Tomb Raider.” The news that she’s in town is getting everyone excited, and WhatsApp messages are flying.

“She went to Battambang today, she has a house there.”

And true enough, photos of her at Angkor make the social media rounds.

Phum Baitang, meaning “green village,” is a collection of 45 private villas nestled in 20 acres of lush gardens and rice fields. It’s where Jolie stayed when it opened in 2015, and she makes it her go-to address during return visits. It’s where I stayed for my last two nights — apparently, I just missed her. She checked out the day I checked in. Oh, well …

Siem Reap has moved way beyond Jolie, Lara and tomb raiders, though. 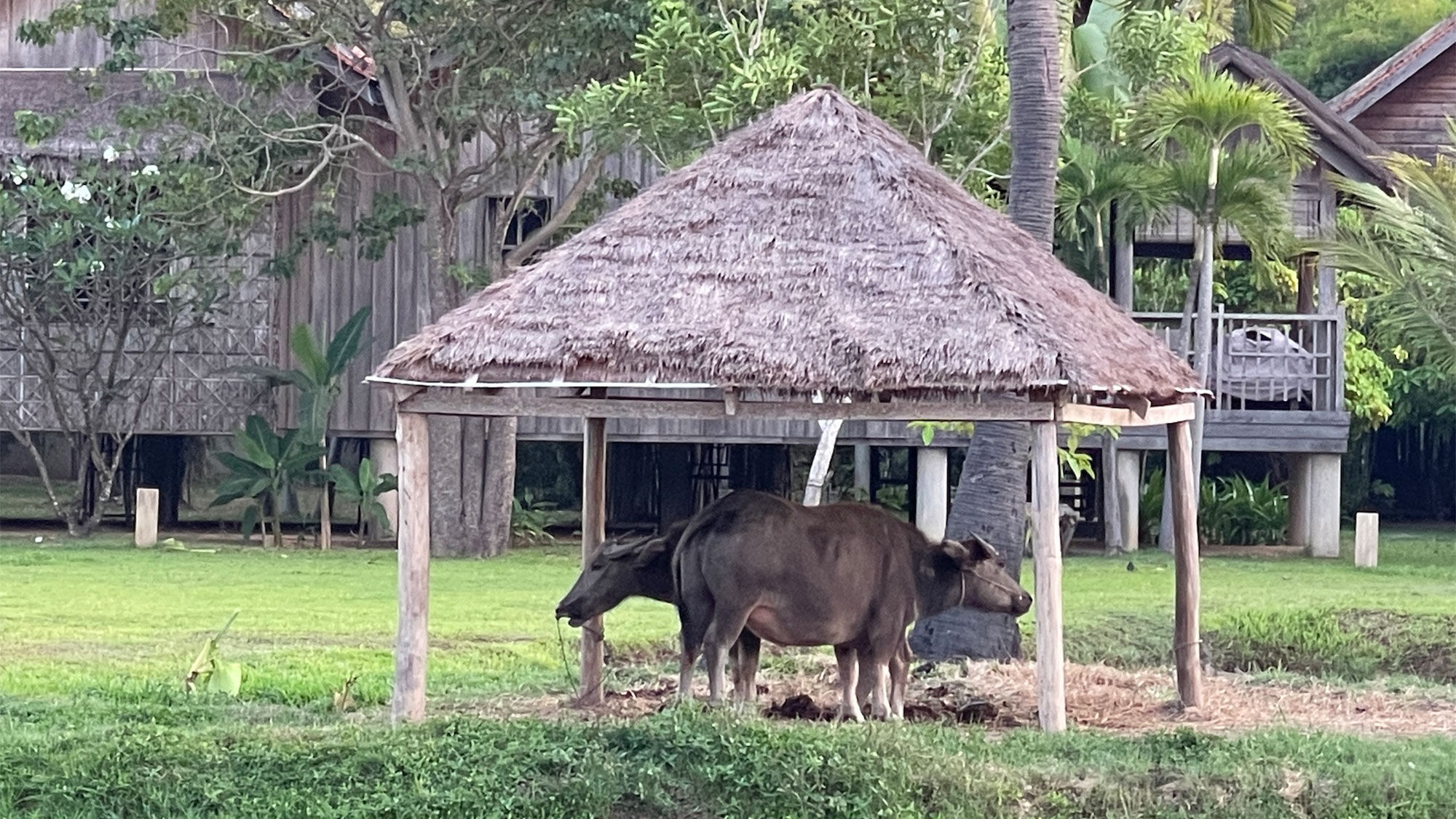 But just as a Western celebrity helped put Phum Baitang on the map internationally, it took a local celebrity to do the same with the local market. Aok Sukunkanha, a Khmer celebrity with 1.4 million followers on Instagram, discovered the resort, stayed there and posted on both Instagram and Facebook. Interest exploded.

“Facebook is what works in the Khmer market, and we quickly set up a booking engine on Messenger,” said general manager Giulio D’Alberto. “Till today, we get loads of locals booking on Messenger.”

It also had to learn to cater to the different needs of Khmer customers. Some do not understand why Phum Baitang is so famous and expensive “when it looks like my village,” D’Alberto said, laughing. Nevertheless, the resort is popular for wedding photos, and the water buffaloes have proven to be highly popular props. “Can we have the buffalo here? Can we have the buffalo there?” are some of the common requests.

For the foodie, Siem Reap’s culinary offerings have expanded. Local Khmer cuisine has taken on modern and contemporary interpretations, like at the Embassy Restaurant, where we sat down to a seven-course menu created by two female chefs, known as the Kamsin twins, who were trained at the local Paul Dubrule and Sala Bai hospitality schools. The dishes are as good to eat as they are to look at. 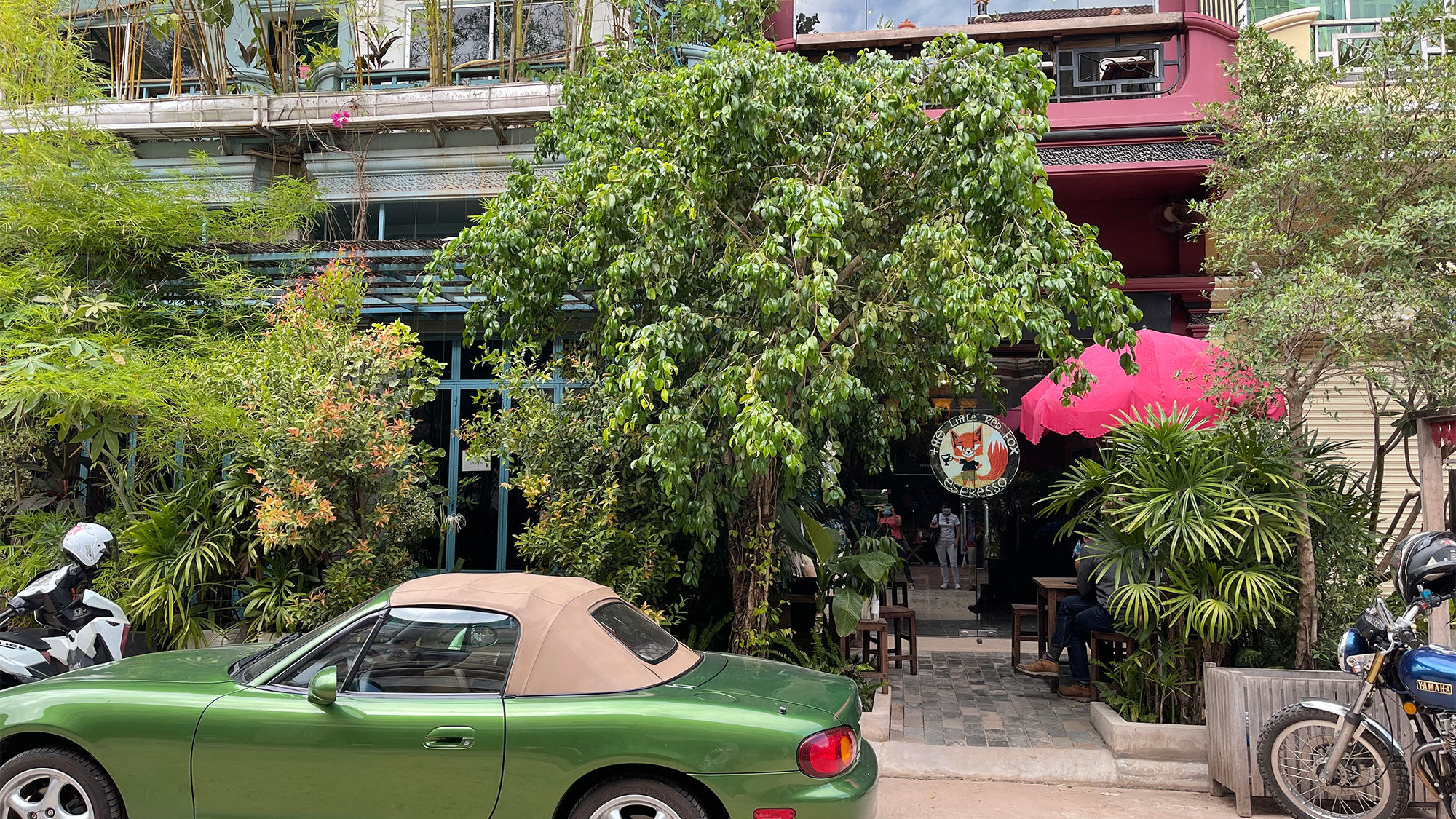 The Sala Bai hospitality school runs its own restaurant where students cook and wait on you. Naively, I asked one of them why he chose to join hospitality; the harsh truth is, what other choice does he have? There are very few job opportunities outside tourism in Siem Reap, and this period that saw the industry crushed has given rise to calls for Siem Reap to diversify its economy beyond tourism.

At Kandal Village, the street known for its artisan shops, cafes and restaurants, a few shops remain open, but most remain closed. The Little Red Fox cafe remains the communal magnet for the handful of travelers who are in town. We had lunch at a little Chinese restaurant that served the most amazing siau loong pau, which are Shanghainese steamed dumplings. The owner is from Wuxi, and you eat whatever she prepares for the day. This was my first taste of Wuxi noodles; all I can say is super-good.

One afternoon, I had a home-cooked lunch at a Khmer House, prepared by the wife of the village chief. It’s literally a farm-to-table experience because she cooks with what she picks from her garden and gets from the local market. 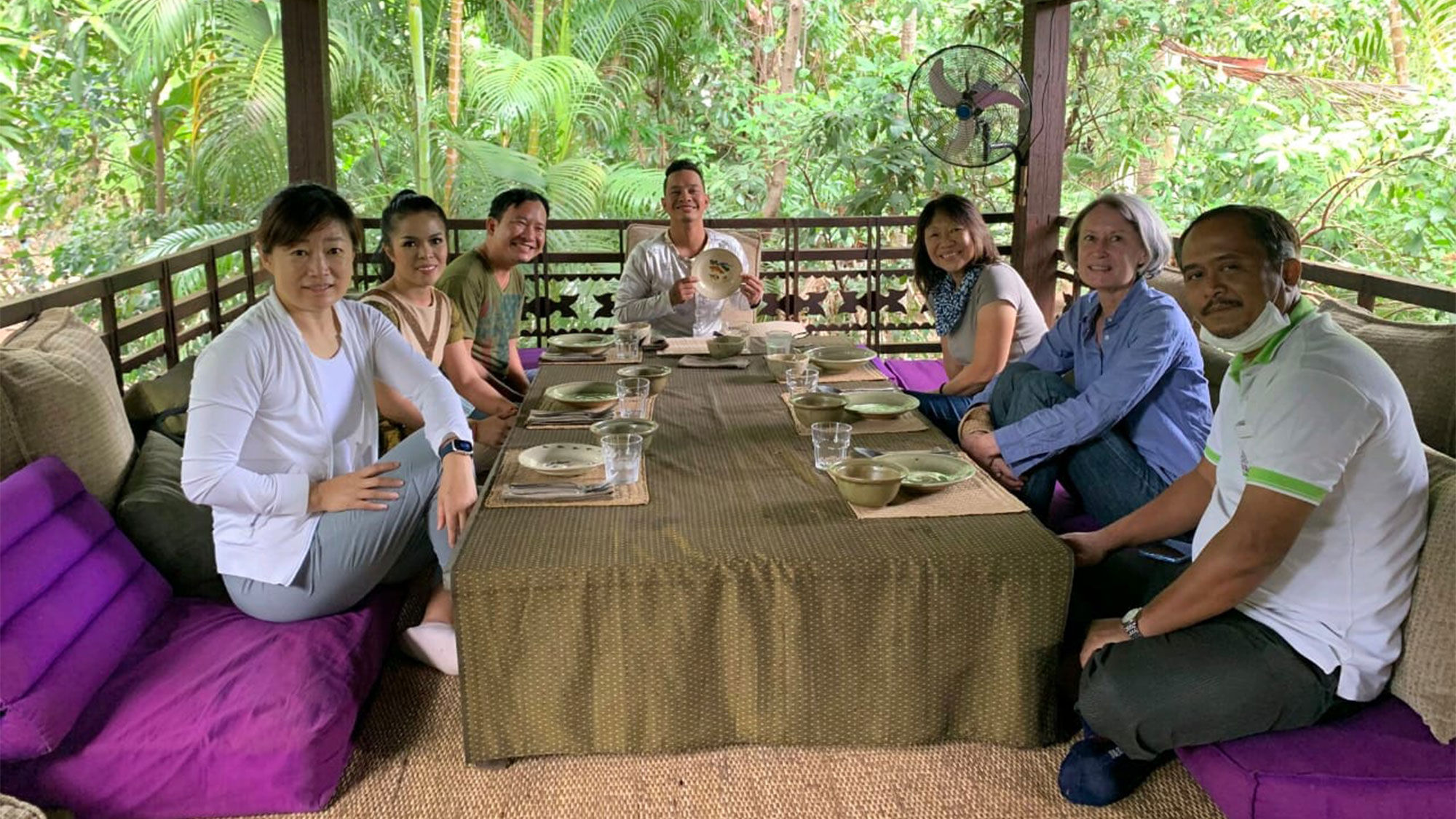 The private lunch idea was created by anthropologist Fabienne Luco, who built the house within the village, when she was deep into her research and wanted to live it rather than just study it. Lunch is only by reservation, one party at a time (even if it’s just two people), and all income goes to the village. “At first, it was only for friends, then we decided to offer it to visitors who would appreciate this kind of experience,” said Luco, who worked with All Dreams Cambodia’s Jacques Guichandut. (Agents can book the private lunch through All Dreams Cambodia.)

A home for elephants

After the wholesome and delicious home cooking, guests are known to take a nap in the house. I was tempted but decided against it, as I also wanted to check out the Kulen Elephant Forest, which I had heard about but had not had the chance to visit because it did not open until December 2019.

“I know, bad timing, right?” co-founder David Jaya-Piot said with a laugh. He met us at the entrance to the 1,000-acre forest reserve. Piot’s family ran Angkor Elephant Company, which used to offer elephant rides around the temples, and when “the world moved on,” as David puts it, they started Kulen Elephant Forest as an ecotourism park to offer a different experience to visitors as well as a retirement home for their elephants, 11 of whom reside now in the reserve.

David, who’s also managing partner of the Angkor Village Group — his parents, Olivier Piot and Tep Vattho, founded Angkor Village Hotel and Angkor Village Resort — returned to Cambodia in 2017, to join the family business. “It’s been tough,” he said of the last two years. “We never thought we would have to keep it going with personal funds, but tourism just stopped.”

But those three months it was open at least proved Kulen Elephant Forest was the right model for its time. It often had to turn visitors away because it placed a daily cap. After all, this is the time for the elephants, ages between 45 and 55, to enjoy their golden years.

“We just them let be, do what they like, we don’t get them to perform for tourists, this is their time,” said David.

In fact, in the forest, the elephants, after having spent a lifetime working, they pretty much do nothing but eat, bathe and sleep all day. For $40 per person, you get to spend a day just hanging  out with these beautiful creatures, feeding them sugar cane and watching them bathe in the pond, while you have a light picnic. 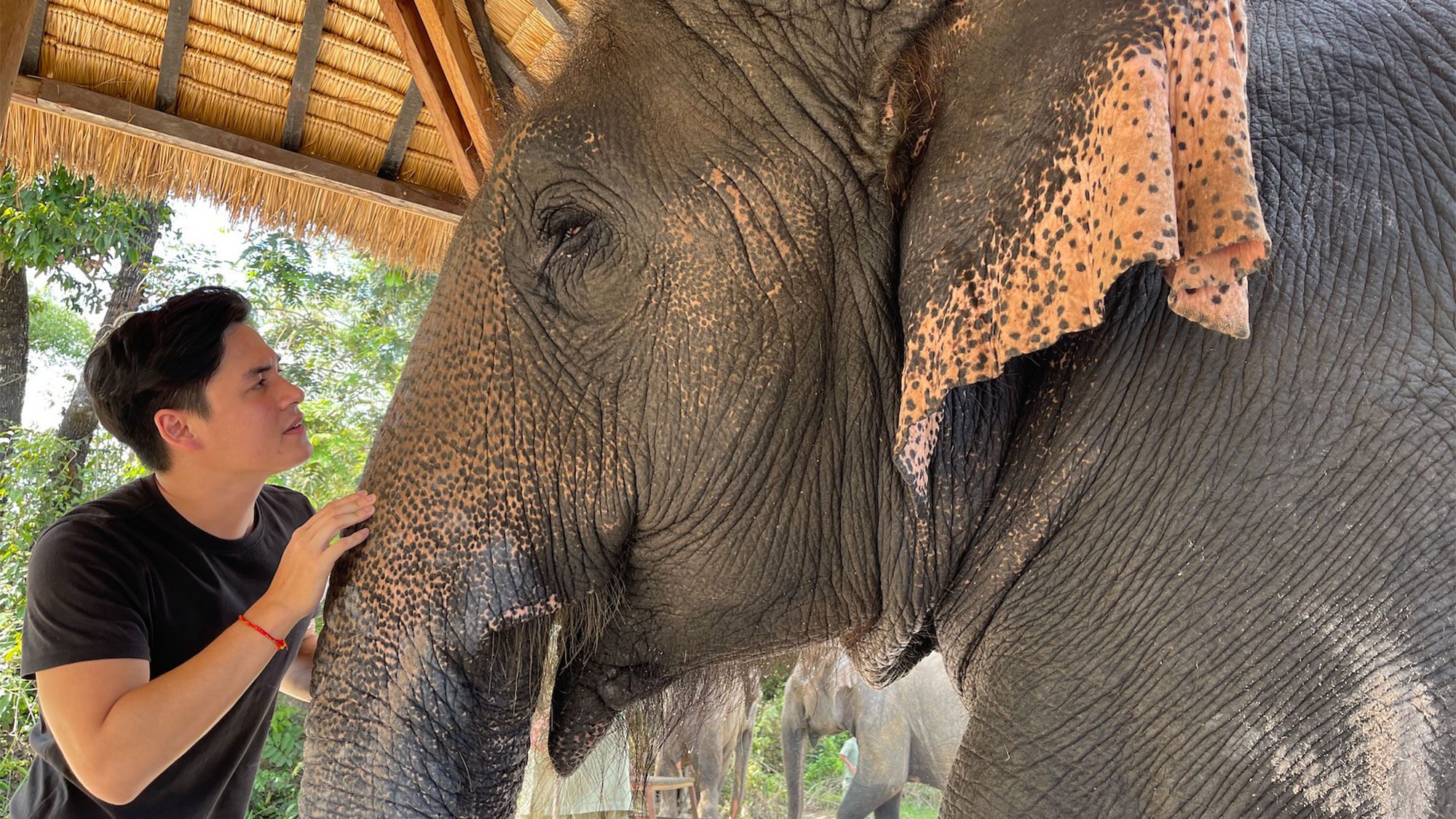 David knows them by name and points out the prettiest one. By elephant standards, that means something like wide, nondroopy ears and a straight back. Pretty or not, each eats over 600 pounds a day, roughly 10% of their body weight, so the food bills can be pretty hefty.

Visitors are slowly trickling back to Siem Reap, and the rest of Cambodia. Everyone I speak to is grateful to Singapore Airlines; it was the first international airline to restart daily direct flights to Siem Reap, and with that comes connecting passengers. The flight I was on was fairly full, with 126 passengers, and I heard a mix of Australian and European accents. That two-hour flight has literally opened up the world to Cambodia after a dark two years.

For me, it just felt really good to feel Southeast Asia again as a traveler.