Oh border, where art thou? Cycling along the bizarre 30ft-wide sliver of Belgium that snakes for 17 miles through GERMANY

At first glance, there’s nothing remarkable about Belgium geographically. It’s flat and a bit oblong, as Google Maps shows.

But look more closely – very closely indeed – at the country’s eastern border on Google Maps, near the German towns of Monschau and Roetgen, and you’ll notice that its geography takes a turn for the bizarre, with a tiny corridor of Belgium marked as snaking through Germany.

This corridor is just ten metres (30ft) wide, it’s bordered on both sides by Germany, and it extends for an improbable 28km (17 miles). The reason it’s thin is because it’s a former railway line – now part of the 120km-long (75-mile) Vennbahn traffic-free trail – and I rode along the full trail on my folding bicycle. 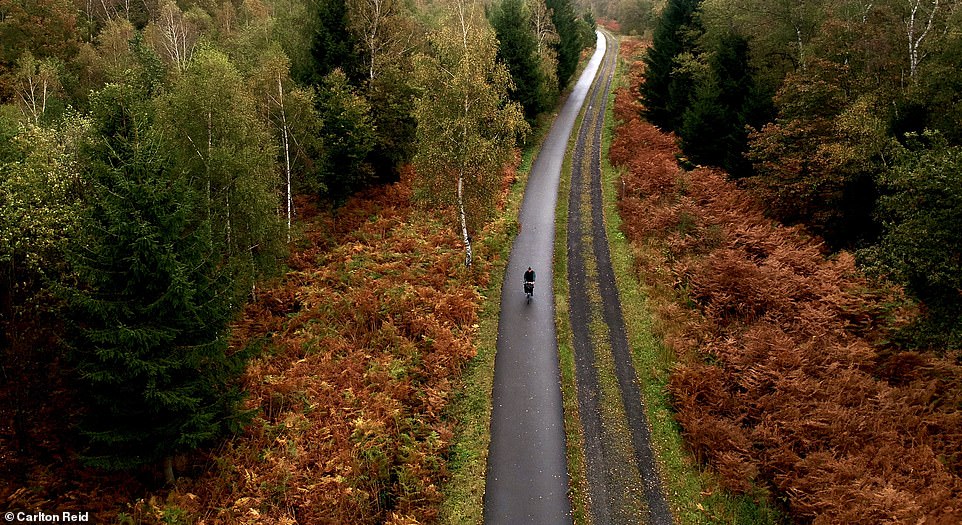 Carlton Reid cycles on the Vennbahn rail-trail, which for 28km is a 10-metre-wide enclave of Belgium in Germany 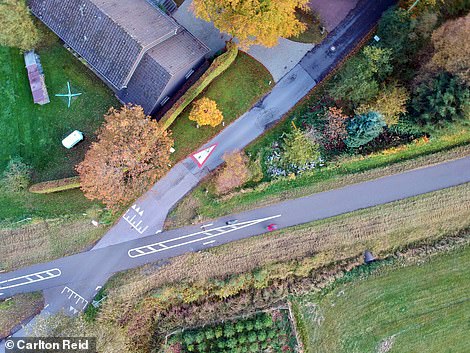 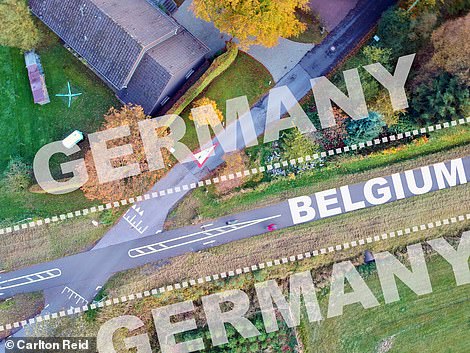 On the left is a view of the Vennbahn from the air, as the Belgian bike path cuts through German fields. The graphic on the right illustrates the Belgian-German boundaries along the trail 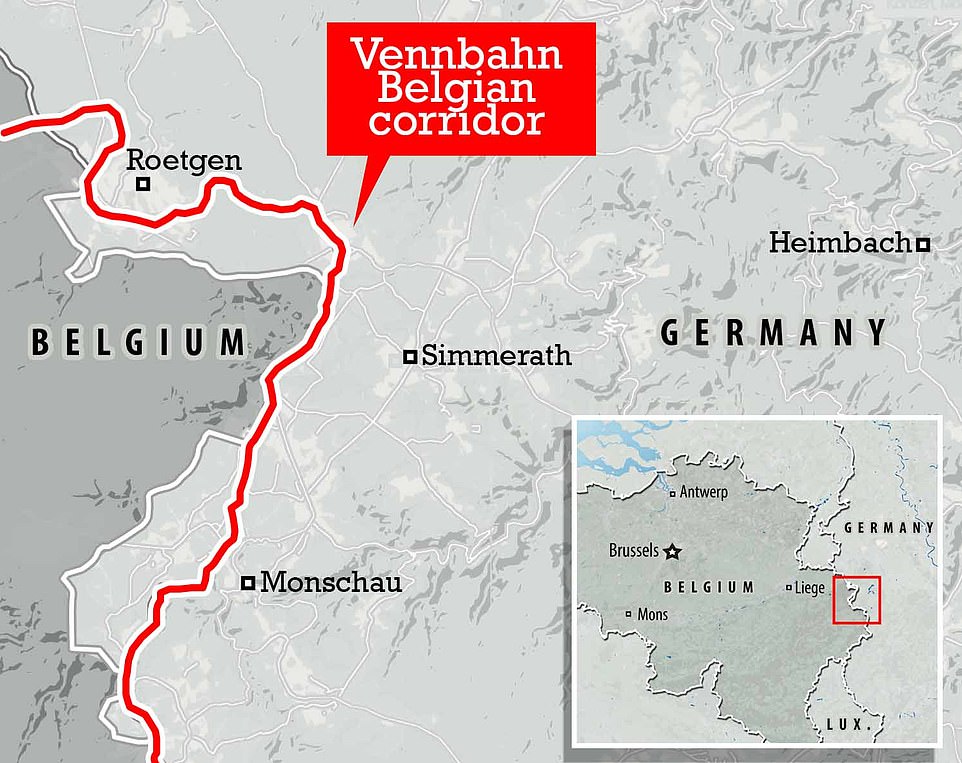 The Vennbahn rail-trail runs through Belgium, Germany and Luxembourg. Above is the peculiar Belgian corridor of the former railway line that cuts through Germany

The trail starts in Aachen in Germany, just to the north of Roetgen in North Rhine-Westphalia, snakes south into Belgium, then re-enters Germany north-west of Roetgen – but here remains part of Belgium.

A skinny country within a country.

On its way south, the corridor creates five enclaves. There are also farmhouses near the trail that are in Belgium but surrounded by Germany, so they get German mail services and so forth.

The Vennbahn trail goes for a meander through Belgium’s high and wild fenlands (Vennbahn means ‘fen way’) and ends in Troisvierges in Luxembourg. 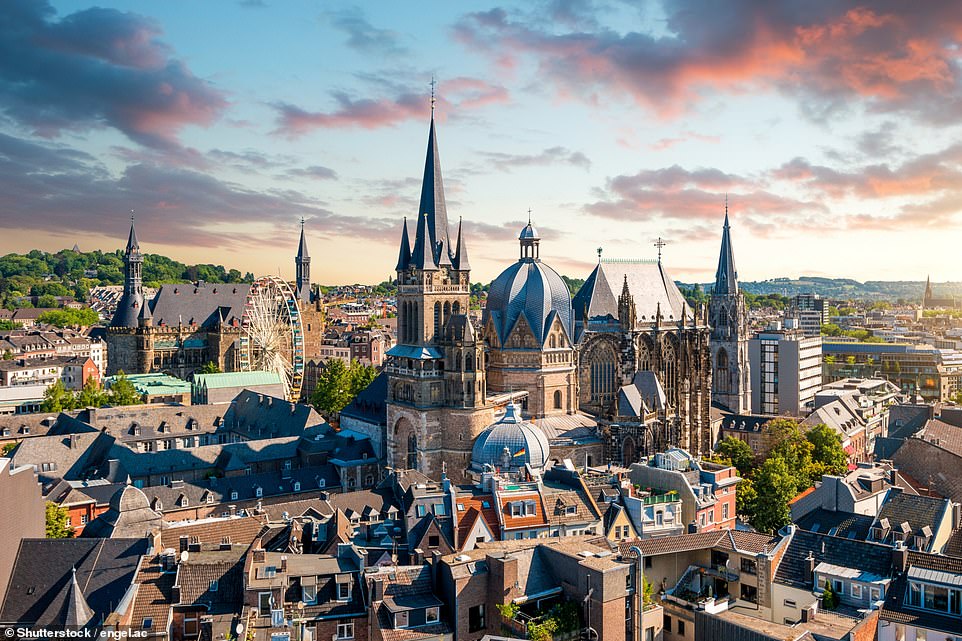 Carlton started his two-day tour along the trail in Charlemagne’s capital city of Aachen, in Germany, pictured 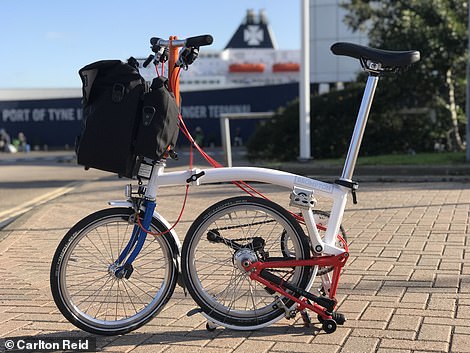 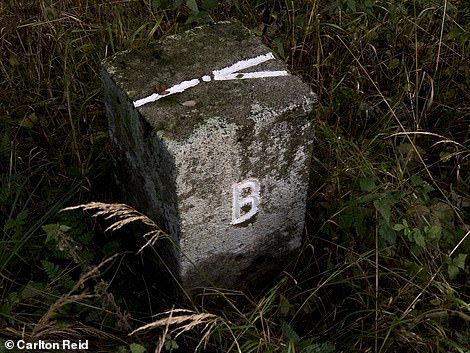 On the left is Carlton’s Brompton folding bike outside the North Shields ferry port, before he set off for the Vennbahn trail. Border stones carved with the letters ‘B’ for ‘Belgie’ (such as the one pictured on the right) and ‘D’ for ‘Deutschland’ dot some edges of the Vennbahn cycleway

The origins of this head-scratchingly confusing border layout can be traced back to the post-WWI Treaty of Versailles, which rearranged various parcels of land in Europe.

The Vennbahn rail line was built by industrialising Prussia in the 1880s but handed over to Belgium by the treaty in 1919. The fact that it weaved in and out of Germany wasn’t an issue, apparently.

The enclaves that were created are so odd that online mapping services differ in how they feature them. The Apple Maps app has decided to ignore the borders of this Belgian corridor within North Rhine-Westphalia. Google Maps, as mentioned, doesn’t.

Evidence for Google’s accuracy is visible on the ground: period border stones carved with the letters ‘B’ for ‘Belgie’ and ‘D’ for ‘Deutschland’ dot some edges of the Vennbahn cycleway. 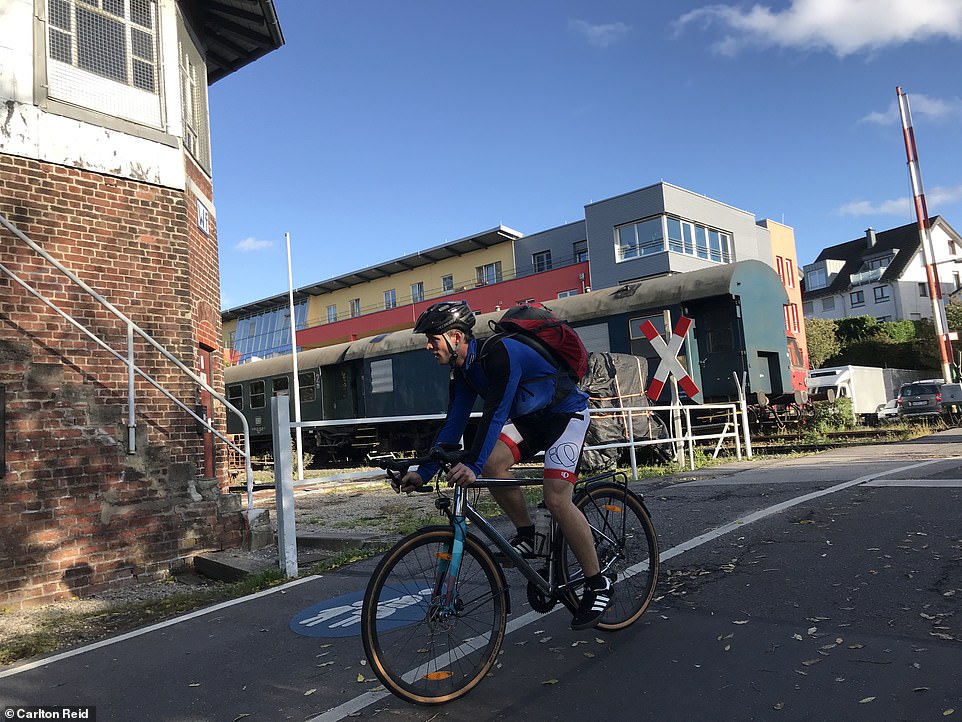 A cyclist on the Vennbahn at the former Walheim station, still with barriers and carriages, in Aachen

THE ORIGINS OF THE VENNBAHN LINE RAIL-TRAIL

The original Vennbahn line was a double-track affair. Redundant rails are still in place along some of the route. Belgian-staffed German trains were still running on the line, sporadically, until it closed in 2008.

Journalist and enclave expert Vitali Vitaliev visited the moribund line five years before it ground to a halt. At the time, it had just one remaining employee, charged with ‘finding new investors and changing Vennbahn’s whole image,’ explained Vitaliev in his 2008 book ‘Passport to Enclavia.’

The rescue attempt failed, but what was bad for railway buffs became a boon for bicyclists. The Belgian rails-to-trails organisation Chemins du Rail worked with German partners to convert part of the line into a cycleway. The success of this pilot convinced politicians to commission further repurposing. Bit by bit, the line came back to life, with an official reopening as a long-distance rail-trail in 2013.

‘I hope that at least some of the carefree bikers whooshing along the new asphalted cycle path will remember the uniqueness of the ground they ride on,’ wrote Vitaliev in his book.

Speaking to me by phone from his home in London, he added: ‘[The conversion of the Vennbahn line] is a great story, and it tells you a lot about [the fault-lines of] Europe as well. It’s good that they preserved it.’

Good for bicyclists, and good for hoteliers, too. Since it reopened, the annual occupancy rates in hotels close to the trail were boosted by a fifth, although this was reversed during lockdown, of course.

The Vennbahn, the longest rail-trail in Europe, ends at Troisvierges in northern Luxembourg. Conveniently, there’s a train service that — two-and-a-bit hours later — deposits the weary traveller back in Aachen.

The regional tourist board organises a seven-day cycle holiday along the trail, but I opted for my own two-day tour, starting in Aachen.

I was travelling with a Brompton folding bike, having arrived in Germany’s westernmost city in the late afternoon via train from IJmuiden, Amsterdam’s ferry port.

I’d started the day before in my home town of Newcastle, riding to the North Shields ferry in strong autumn sunshine.

Aachen was once the capital city of Charlemagne’s Holy Roman Empire, which was ‘not holy, nor Roman, nor an empire,’ snarked Enlightenment philosopher Voltaire. The city’s focal point remains Charlemagne’s cathedral, in which the emperor was buried in 814.

Aachen Cathedral was one of the first 12 places to be included on the Unesco list of world heritage sites. The start of the Vennbahn trail is in no danger of being similarly listed — it’s a nondescript alleyway close to the rail station of Aachen-Rothe Erde, once a major depot for the coal, iron ore and limestone devoured by the region’s former heavy industries. 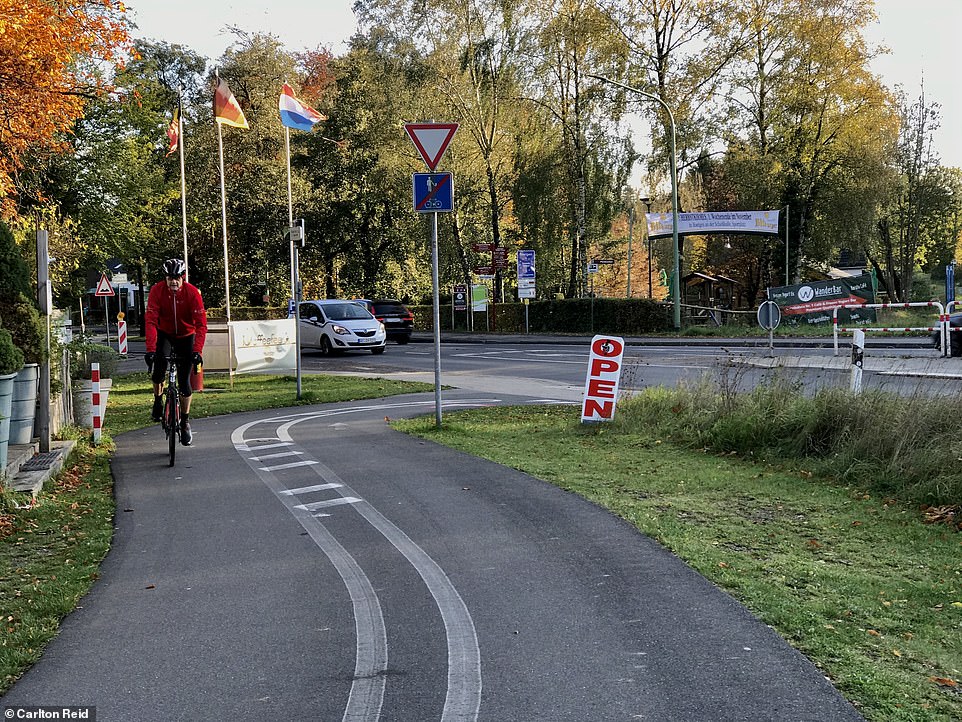 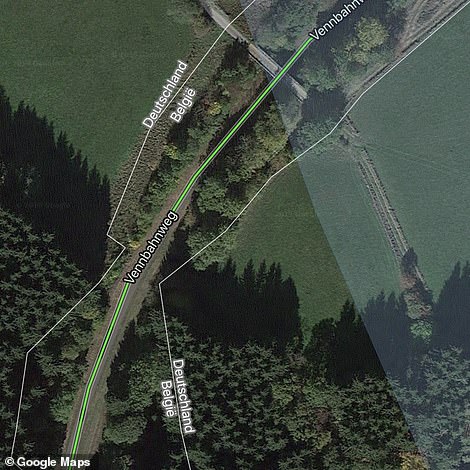 But what the trailhead lacks in grandeur it makes up for in anxiety-reduction — the city morphs into the countryside within minutes, and endorphins replace adrenalin as you realise that, for the next 120 or so kilometres, there will be little to no interaction with motorists. Twenty-eight of these kilometres form the enclave of Belgium within Germany.

After an initial ramp, most of the trail is flat, achieved through some ingenious contour hugging around the High Fens, a boggy no man’s land between the Ardennes and the Eifel hills.

The trail’s asphalt curves are long and subtle; their existence noted when the sun appears to your front when minutes before it had been at your back.

Thirty kilometres from the start of the trail, and close to where the skinny enclave starts, Roetgen is the first town en route. Recently described by an official at the US Embassy in Berlin as a ‘small town with a big role in Germany’s history,’ Roetgen was where, on September 12, 1944, the first allied troops pushed into Germany during WWII.

There’s a monument in town to the two soldiers who died that day: an American and a German. Sixty thousand more would subsequently die in the six-month-long Battle of Huertgen Forest, next to Roetgen.

Ernest Hemingway, embedded with the troops as a war correspondent, likened the muddy, senseless battle to the previous war’s Paschendale. A Wikipedia article on the battle says of the Germans’ positions that a ‘relatively small number of determined and prepared defenders could be highly effective’, which brings to mind today’s war in Ukraine.

Roetgen was a strategic part of Nazi Germany’s Siegfried Line of defences and there are still concrete ‘shark’s teeth’ anti-tank barriers in woodlands close to town. They are not tourist magnets, and just like the border marker stones, they are smothered by undergrowth. 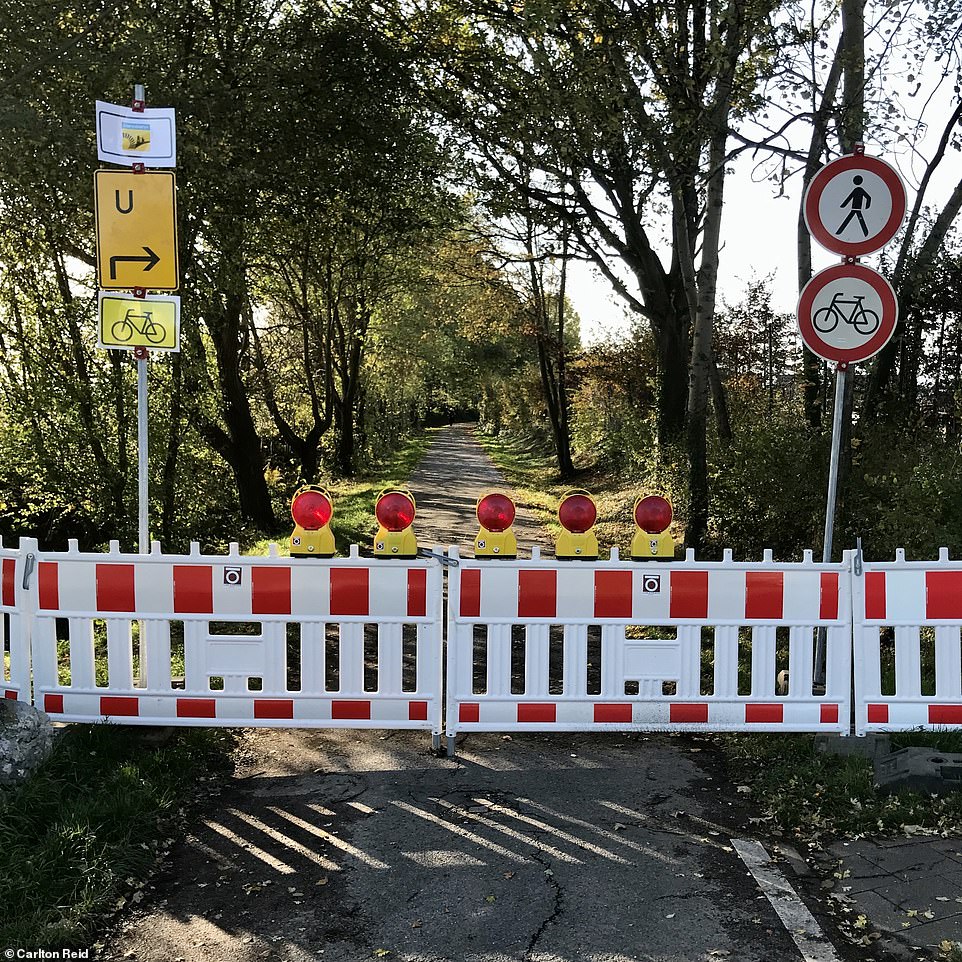 Above is a diversion on the Vennbahn. The regional Belgian tourist board organises a seven-day cycle holiday along the trail, Carlton reveals 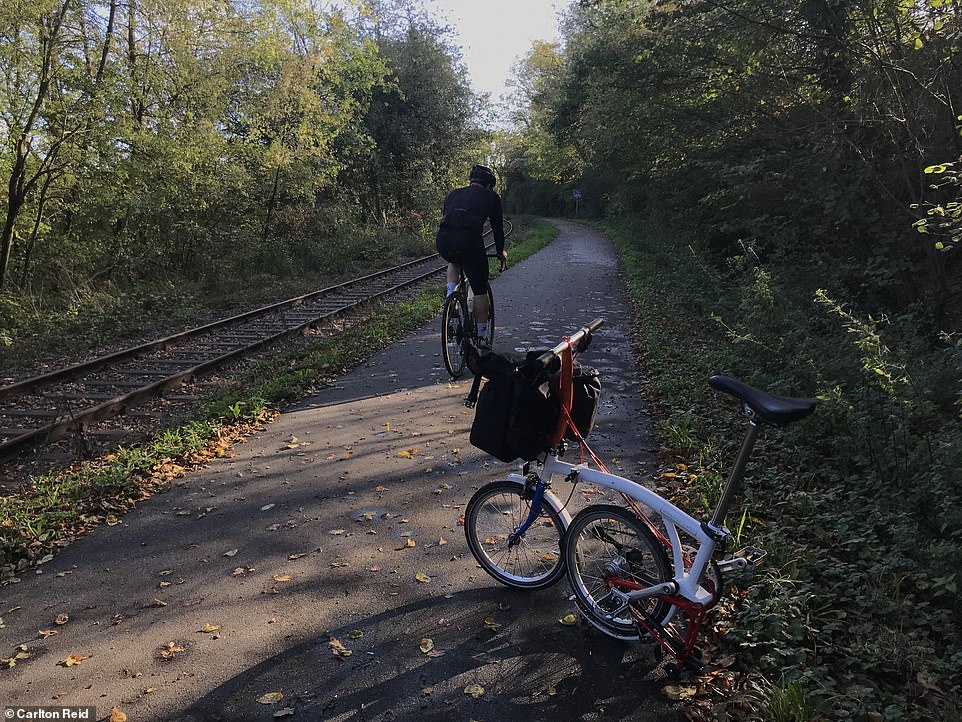 The Vennbahn railway was a double-tracker, with one side of the track still in situ on some parts of the trail 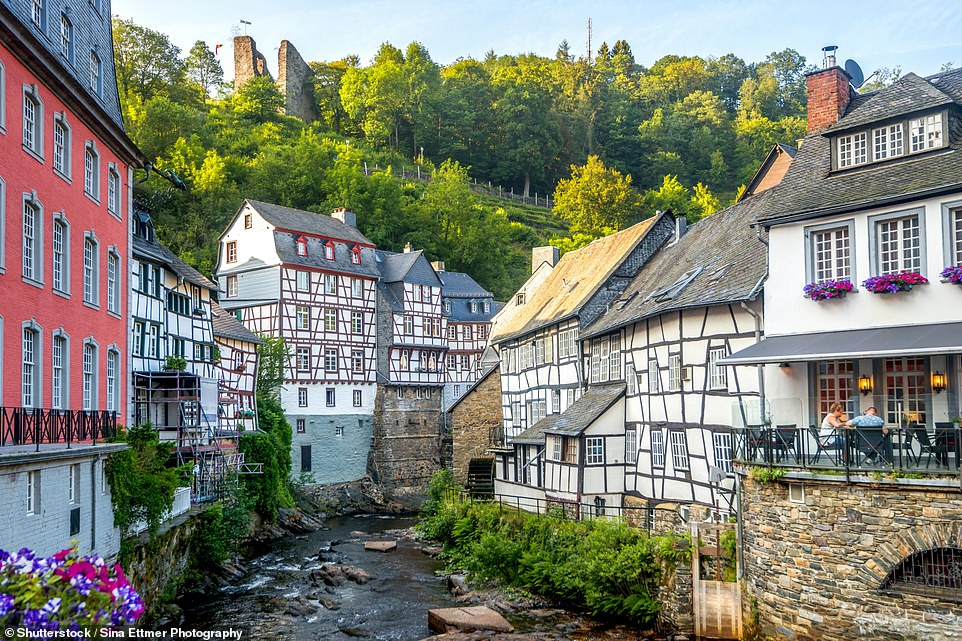 Carlton stopped to spend the night in medieval Monschau (pictured), accessed by a dirt path down from the trail 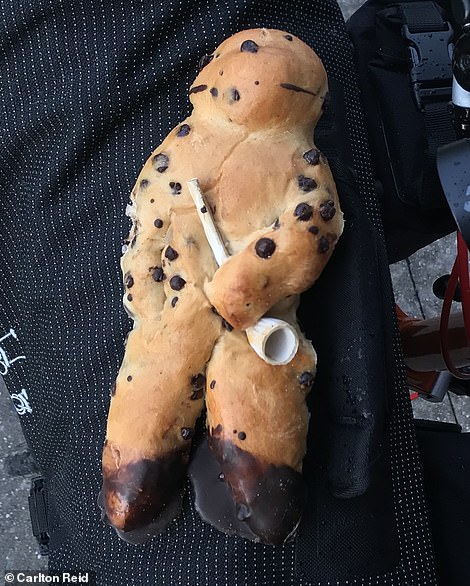 Chastened by this apparent lack of folk memory, I headed downtown and cheered myself with some carbs. From a bakery a few hundred metres from the trail I bought a man-shaped pastry studded with choc-drops. This was a Stutenkerl, a regional winter delicacy, and it fuelled me until I reached my destination for the day: the medieval Monschau, accessed by a dirt path down from the trail.

I arrived after dark and became closely acquainted with the town’s cobbled streets as I bounced up and down them seeking the Besttime Hotel, a newly-converted bishop’s house.

Above, picked out by floodlights, was Monschau Burg, an imposing 14th-century castle that was converted into a youth hostel at almost the same time that the Vennbahn railway was ceded to Belgium.

Still classified as a ‘Jugendburg’, or youth castle, the property overlooks the serpentine Rosenthal river, which shaped the town.

Leaving the next morning with the Rosenthal rapids ringing in my ears, I climbed to the Vennbahn trail and headed for the former station at Kalterherberg, which today houses a Rail Bike operation. This rents out four-seater ‘rail bikes’ for a seven-kilometre (4.3-mile) pedal along the rails to the dead-end at Sourbrodt and back.

The operation, within the 10-metre-wide part of Belgium squirming through Germany, also has a train-carriage café which specialises in waffles. Metres across the tracks, and, technically, no longer part of Belgium, the main offering from the Biggys food truck is schnitzels.

The seven-day Vennbahn Experience Tour is organised by Tourism Agency East Belgium and costs £483 (€580) per person. A one-way train ticket from Amsterdam to Aachen costs £46 (€55) from Loco2. The hotels used on the trip were the budget Besttime hotel in Monschau and the homely Steineweiher hotel in St Vith. The Newcastle—Amsterdam ferry crossing starts at £67 each way. There’s no charge for folding bikes.