Would you do a phone-free holiday? Growing number of hotels are offering free perks to guests – but they must hand over their devices

Can you take a holiday without checking your mobile phone? A growing number of hotels will help you find out.

Some resorts are offering perks, like snorkeling tours and free snacks, to guests who manage to give up their phones for a few hours.

While others have phone-free hours at their pools while others are banning distracting devices from public places altogether. 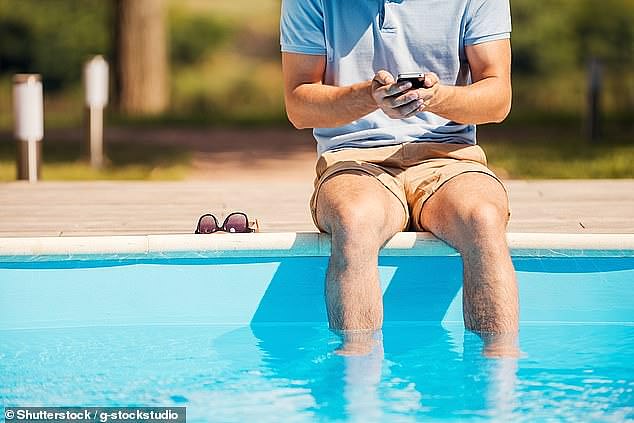 But they say the policies reflect their mission of promoting wellness and relaxation. And, of course, they hope that happily unplugged guests will return for future visits.

Wyndham knew it had a problem when hotel managers requested more beach chairs to accommodate all the people who would sit in them and stare at their phones.

It discovered that the average resort guest was bringing three devices and checking them once every 12 minutes – or roughly 80 times a day.

From October, Wyndham Grand’s five U.S. resorts began offering prime spots by the pool, free snacks and the chance to win return visits when guests put their phone in a soft, locked pouch. The phones stay with the guests, but only hotel staff can unlock the pouches. 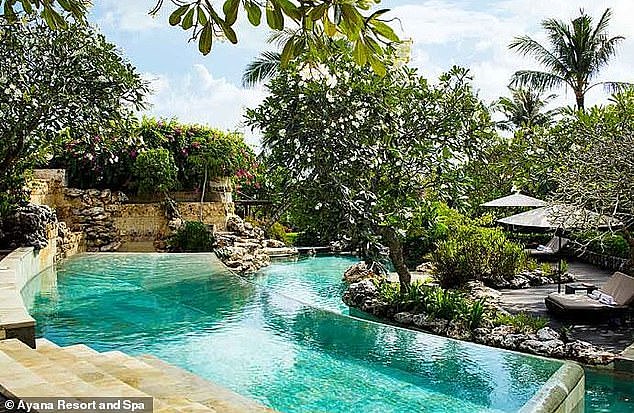 At the river pool at Ayana Resort and Spa in Bali, Indonesia, guests cannot use their phones between 9am and 5pm

Wyndham says 250 people have used the pouches so far at resorts in Florida and Texas. The programme will be found at more Wyndham hotels next year.

Wyndham Grand resorts also give families a five per cent discount on their stay if they put their phones in a timed lockbox.

The hotel provides supplies for a pillow fort, snacks, a bedtime book and an instant camera for adults and kids who don’t know what to do with all the newfound time on their hands.

That appeals to Matthew Cannata, who heads public relations for the New Britain, Connecticut, schools.

He worries about the impact of technology on his two young children, and he tries to keep devices out of sight during family meals. 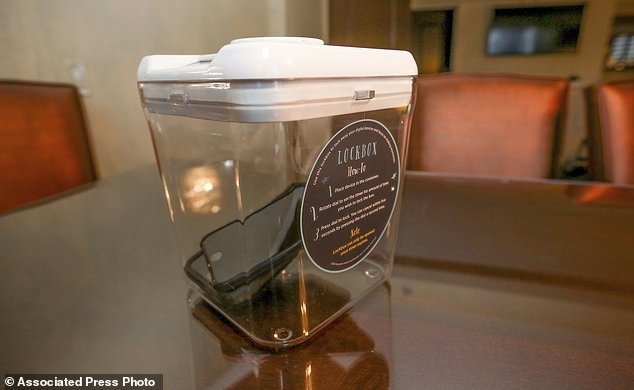 At the Wyndham Grand Hotel in Chicago, guests can opt to have their phones locked away in a box in exchange for free perks

‘Any chance I can get to put the phone away is great. Sometimes, people need to be forced to do things to start a thought process and then create a habit,’ he said.

At the Grand Velas Riviera Nayarit in Mexico, a so-called Detox Concierge will ‘cleanse’ your suite of all electronic devices and replace them with games like Jenga and chess.

Guests at its sister resort, the Grand Velas Riviera Maya, trade in their phones for a bracelet that gives them free access to activities like snorkeling; they must do at least four activities to earn back their phones.

A timer placed in the lobby shows how long each family has lasted without their devices.

Emily Evans likes the idea of rewarding people for putting their phones away. A senior at Eastern Kentucky University, she says she barely keeps her phone charged while on vacation, but her girlfriend is constantly checking her phone.

‘I feel most millennials would choose discounts and saving money over having their phone out to Instagram and Snapchat pictures of their meals,’ Evans said. 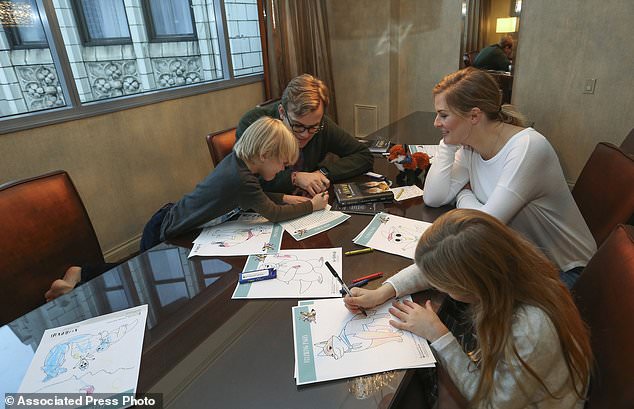 At Miraval, a Hyatt-owned resort in Arizona, the emphasis is less on family time than on mindfulness and tranquility.

Miraval, which will soon open two more resorts in Texas and Massachusetts, bans phone use in most public areas.

Guests are encouraged to tuck their phones into soft cotton bags and leave them on small wooden beds in their rooms.

Staff wear name tags with gentle reminders that guests should unplug and ‘be present.’

Meanwhile some resorts encourage a total ban. Wilderness Resorts, an African safari operator, intentionally provides no Wi-Fi at many of its camps.

Adrere Amellal, a 40-room hotel at the Siwa Oasis in Egypt, lets guests have phones in their rooms, but there’s no electricity or Wi-Fi.

But not all vacationers want to be weaned from their devices. Phones double as cameras, music players, travel guides and e-readers. They also might be critical in an emergency. 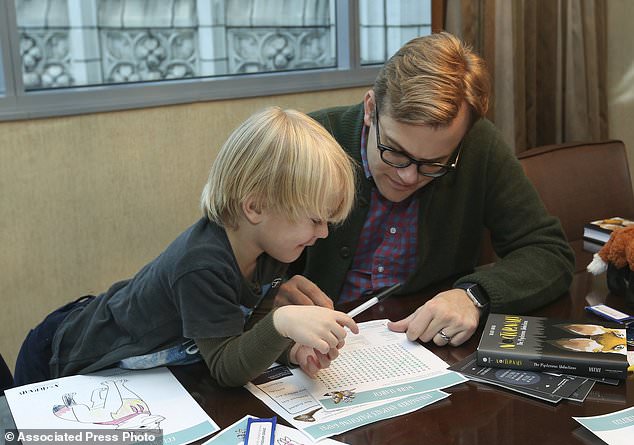 Adam Bryan and his son Wesley complete a puzzle together. Wyndham Grand resorts also give families a five per cent discount on their stay if they put their phones in a timed lockbox

David Bruns, a communications manager for AARP Florida, uses two phones. He tries not to check his work phone after hours, but he carries his personal phone everywhere.

‘I don’t think I would like being made to put the thing down,’ Bruns said. ‘It feels like that is more about me being told what to do by people I am paying to do something for me.’

Ayana Resort and Spa in Bali, Indonesia, understands that, so it tries to meet guests halfway. Its winding River Pool bans phones between 9 a.m. and 5 p.m.

But it invites guests to take photos and post away to social media before and after those times.

People’s inability to disconnect is an increasingly serious issue.

Half of smartphone users spend between three and seven hours per day on their mobile devices, according to a 2017 global survey by Counterpoint Research, a technology consulting firm.

In a separate study by the nonprofit Common Sense Media, 69 per cent of parents and 78 per cent of teens said they check their devices at least hourly.