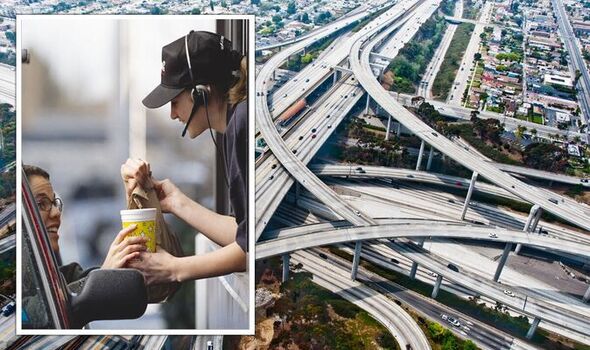 Almost 700,000 British expats live in the USA according to statistics from the US census in 2016. But what will British people need to get used to if they cross the Atlantic?

An American asked people on Reddit: “Non-Americans. What is strange about America?” The responses ranged from cuisine to driving culture.

A person said: “How American towns and cities are generally designed so that you have to drive everywhere.”

It can be difficult to get around in the USA without a car and expats may be shocked to find out that they will need one.

An American added: “American cities and towns were built around cars, which makes sense given our historical circumstances but is rather impractical in most other situations.”

Around 92 percent of people travel to their workplace by car in the USA with fewer than three percent travelling on foot.

In one study, only two thirds of Americans reported walking for more than 10 minutes at any time during the week.

The American enthusiasm for cars also influences the way they shop, another thing for British expats to get used to.

One person said: “Drive-thru shops! There’s a drive-thru for everything it seems over here, even for pharmacies as well. This is new to me because we don’t have them in my country.”

An American agreed saying: “It’s true, I don’t have to leave my car for anything. Drive up pharmacies, groceries, booze, any type of food, etc.”

Drive-thrus are very common in some areas of America and people can even pick up medication from within their car.

While the McDonald’s drive-thru has become popular in the UK, Britons might struggle to buy goods apart from fast food from their car.

One person said the strangest thing about American culture was the huge “portion sizes” at restaurants.

Restaurant portions in the USA are generally bigger than those offered in the UK, which in turn are often larger than in the rest of Europe.

However, an American said: “It’s fantastic for leftovers. I’m pretty sure most people know and want big portions so they can take them home and have leftovers for later.”

A ‘doggy bag’, or bag or container, is often used to carry home restaurant leftovers in the USA.

While big portions aren’t customary everywhere in the States, some restaurants specialise in overfeeding their guests.

The Heart Attack Grill in Las Vegas sees diners don hospital gowns before diving into the ‘Bypass’ burger. Customers who weigh over 350 pounds (160kg) can eat for free.

A person said: “Tipping. It makes no sense to underpay workers in food and expect the customer to make up for it. It should be the business’ responsibility to have fair pay for workers.”

Another added: “Doesn’t make sense. Tipping should be an extra ‘thank you’ for exceptional service, but workers shouldn’t have to rely on tips for the bulk of their income because they’re getting paid such a low hourly wage.”

In the USA, tipping 15 percent of the bill for table service in a restaurant is considered standard while exceptional service may earn tips of 25 percent.