Dorset has us all drooling! Kimmeridge Hall is a pawfect coastal escape for the whole family

Five minutes after our arrival at Kimmeridge Hall, an imposing 18th-century manor house on the Dorset coast which welcomes guests with ‘well-behaved’ dogs, I am wondering whether this is the daftest holiday idea ever.

‘Felix! No shooting inside the house!’

‘Evie! Cartwheels are for outside!’ 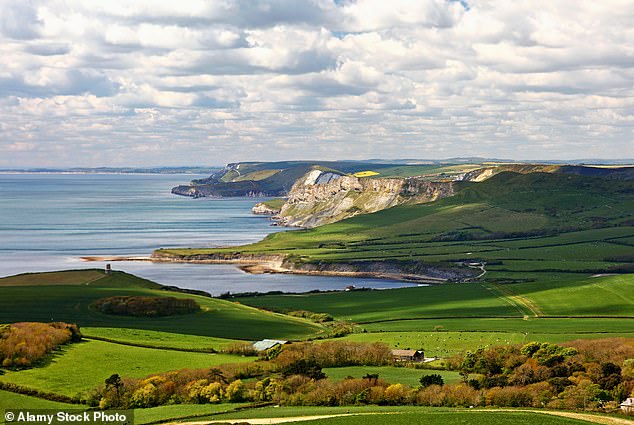 ‘Rose! Careful where you stick that iPhone charger!’

With its sweeping drive, cannon-flanked entrance, walled garden, 50 acres of adjoining woodland and path leading down to the sea, the setting is made for three young children with stamina and an exuberant, six-month-old cockapoo.

But how would we cope with the treasures inside?

The entrance hall alone contains gifts from William III and a goblet once owned by an empress of Russia.

There’s only one thing for it — head outside.

Within minutes the garden resembles a scene from It’s A Knockout. Happy children dart from half-finished games of badminton, croquet and football, while the dog does loops round the rhododendrons. A welcome jug of Pimm’s, a glimpse of the sea and I am beginning to think manor house living isn’t entirely beyond us. 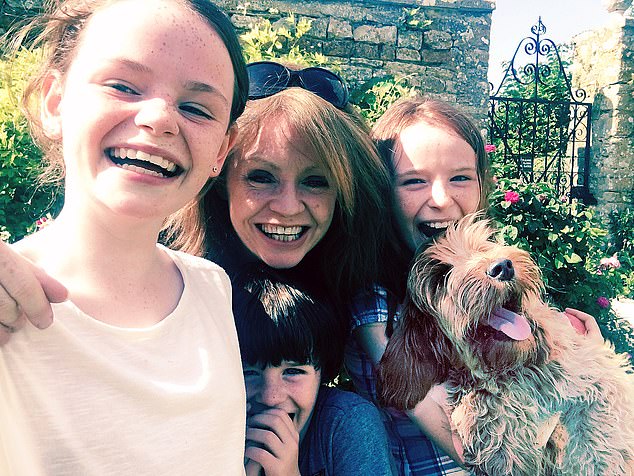 Fiona Hardcastle, pictured above, with her three young children and pet dog

Back inside, we decide to close off all the rooms we can’t use. Or almost all. Dangerous notions of period dramas had taken hold and, unable to resist the lure of the 20-seater dining room festooned with Furstenberg plates, I found myself thinking: what could be more fun than a formal dinner?

Ah, yes. Having downstairs staff to prepare the whole thing. Future hostesses may like to note that a chef can be hired at extra charge.

Uno and Cluedo in the book-lined study — Colonel Mustard with the candlestick and a very large glass of white burgundy — restored a sense of calm. As did the discovery of Netflix.

And the dog, exhausted from his first taste of the sea after an afternoon tearing around Kimmeridge Bay, was stretched out in the cedar-panelled drawing room, belly up towards the fire.

Long afternoon baths — with glorious views of the garden — became a fixture for my husband, the girls and I started dressing for dinner, and five-year-old Felix, who had hitherto shown no interest in the property ladder, asked whether we could save up enough money to buy the place. Or the cannon, at least.

It was with the heaviest of hearts – and an air of Audrey fforbes-Hamilton on my part – that we traded in our Georgian splendour for the more cosy surroundings of the second part of our trip.

But what was lacking in size was made up for in charm. For Greenwood Grange, a complex of 17 stone cottages in the very heart of Hardy country, has thought of eveything. From its compact swimming pool (perfect for rainy day entertainment) to an outbuilding lined with tumble dryers (ditto), attention to detail is everywhere.

Never before have I been presented with a welcome pack of personalised towels and blankets – for a dog. I am not sure who was more thrilled – Rusty or the children – but I am keeping a close watch on any emerging signs of Roger Federer vanity.

Time to put the dog in his place – with a long and muddy walk starting at the birthplace of Thomas Hardy, now a National Trust property directly opposite. It is still as he described it in Under the Greenwood Tree, ‘a long low cottage with a hipped roof of thatch and three chimneys’, standing alone at the end of an unmade track.

Around the corner, we picked up a pair of homemade catapults from an unmanned stall, stuffing a fiver into the jar. My husband suddenly transformed into his ten year old self, much to the delight of Felix, happy to get to grips with a new weapon.

Our final night and to The Acorn Inn, in Evershot, an atmospheric 16th century coaching inn which has dogs and children uppermost in mind as well as a first-rate restaurant.

So while Rusty was bewitched by Mabel, a lugubrious Bassett Hound at the adjoining table, the children could get down as soon as they had finished and amuse themselves at the inn’s traditional skittles alley while we enjoyed our meal in peace.

Cannons, catapults and enough coastaline to exhaust dependents both on and off the lead.

No wonder dogs endorse it.