An Italian rock star: Once dubbed the shame of Italy, Matera is soon to be named a European Capital of Culture

One glimpse of this golden city perched on the edge of a steep ravine and you wonder why it isn’t a rival to Venice or Florence.

But at least Matera, in Italy’s southern Basilicata region, takes over as European Capital of Culture (jointly with Plovdiv, Bulgaria) in January.

The instep of Italy’s bony foot is used to being overlooked. True, Matera’s troglodyte dwellings, ancient cave churches and underground water cisterns have enjoyed UNESCO World Heritage Site status for 25 years. But it has taken until now for Matera to capture the world’s attention. 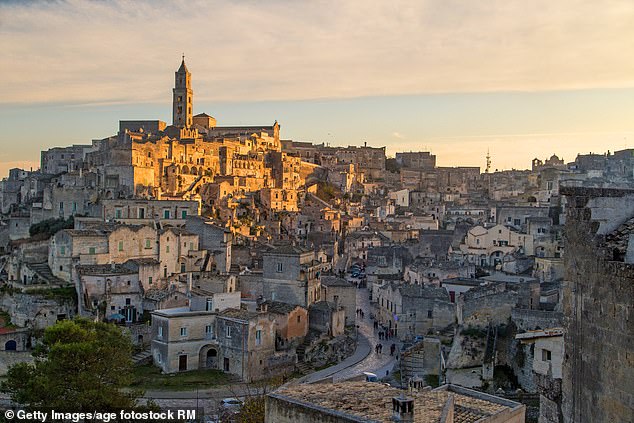 Not so shameful: The sun sets over the  Matera’s old town

Hundreds of dwellings in the city, some natural, some hewn out of the soft, fossil-speckled tufa rock, are known as sassi – literally ‘stones’.

As recently as the Sixties, their inhabitants were so poverty stricken that Matera was best known as ‘the shame of Italy’.

On the Piazza del Duomo, outside the cathedral, from where there are sensational views over the city and gorge.

Twist and turn down a jumble of stone staircases and through arches between sassi stacked like cells in a beehive to Matera’s number one rock star, the Chiesa di Santa Maria di Idris, a church entirely dug, over the centuries, out of a gigantic boulder. 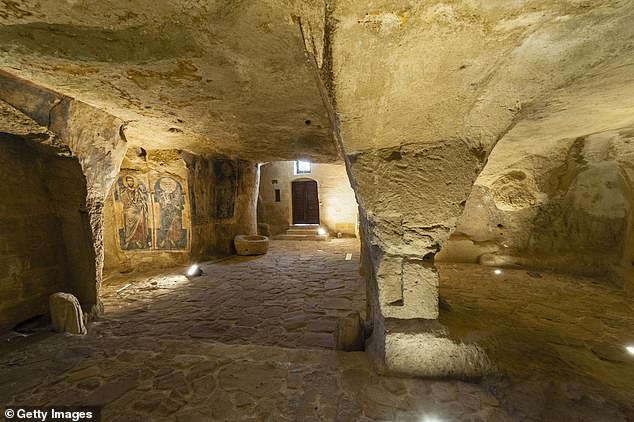 A cave in the Santa Maria di Idris, Matera’s church carved out of an enormous boulder

On Saturday, January 19, Matera will explode in celebration at an opening ceremony involving marching bands from villages across Basilicata. The idea is to revive the great traditions of southern Italy on a grand scale.

After that, Matera is drawing on its geology and history in a series of theatrical and musical events and exhibitions themed on ‘Ancient Future’.

The more bizarre-sounding include Quantum Danza, musical and dance performances that take their inspiration from quantum physics.

A Story of Redemption is an exhibition charting the refurbishment of abandoned sassi. 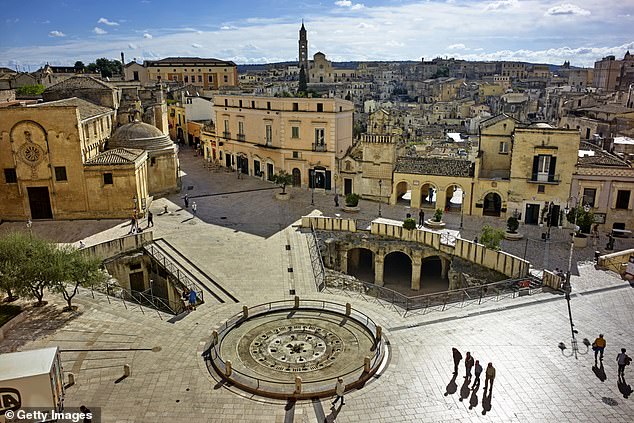 Along with the historical centre, ‘Sassi’, the Park of the Rupestrian Churches is a UNSECO World Heritage Site

So evocative is Matera of the Holy Land that it was chosen by Mel Gibson as the set for Jerusalem in his 2004 film The Passion Of The Christ.

The city has featured in numerous other movies including Pier Paolo Pasolini’s classic The Gospel According to St Matthew.

This is best done on foot. There is really little alternative to the labyrinthine, traffic-free alleys and staircases.

Roots and Routes, a Capital of Culture theme, links together points of interest in a series of mapped itineraries between historic sites and buildings housing exhibitions and events. 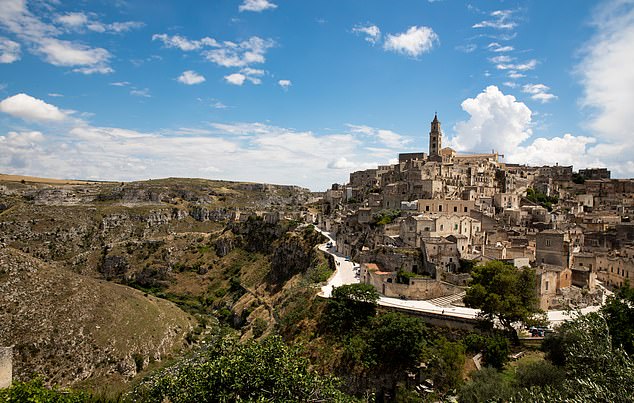 Something different: Hike away from the ‘Sassi’ district into the Gravina Canyon

All sorts of treats. Tuck into Basilicata specialities such as Baccala alla lucana (salted cod with Senise red peppers).

The local Cacioricotta cheese, made from a blend of goat’s and sheep’s milk, is delicious. Sniff out the crumbly strazzate almond biscuits flavoured with local Strega herbal liqueur.

If you splash out just once, make it the exquisite La Cucina, Le Bubbole restaurant in a candle-lit cave underneath the Palazzo Gattini (see below). Booking is essential. 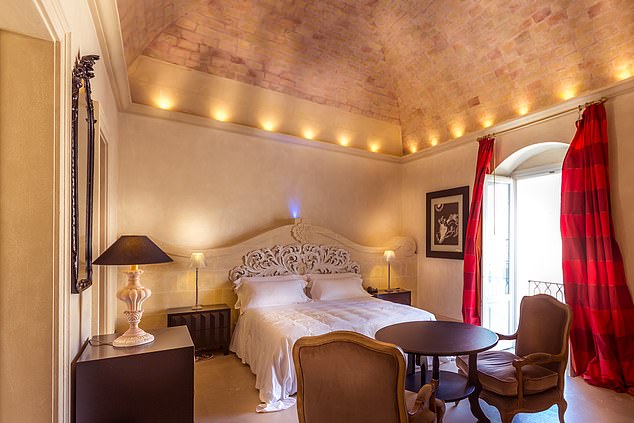 Romantic mansion: A a vaulted double room at the Palazzo Gattin

The sybarite’s choice is five star Palazzo Gattini (palazzogattini.it), a ravishingly romantic mansion at the heart of the sassi district with vaulted rooms, a spa pool in the basement and glorious views from the roof terrace. Doubles are from £168.

To get in touch with your inner troglodyte without compromising on style, there is Le Grotte della Civita (legrottedellacivita.sextantio.it), a bijou cave hotel carved out of the tufa stone cliff. Doubles from £133. Or, for a budget sassi experience, try the three-star Caveoso Hotel (caveosohotel.com). Doubles from £60.

Hike from the sassi district down into the Gravina canyon. Cross the footbridge, then wind up the cliff on the other side, which is pocked with 150 or so mysterious chiese rupestri (cave churches) concealing tiny shrines and beautiful frescoes.

At the top you reach the Parco della Murgia Materana, a wild, protected plateau with views of Matera back across the gorge.

Cox and Kings (coxandkings.co.uk, 0203 642 0861) offers three nights B&B at Palazzo Gattini from £895 per person including flights and private transfers.