A picture of a Thomas Cook plane is going viral for all the wrong reasons.

Something appears to have gone awry when designers were painting the aircraft.

While the construction all seems to have gone to plan, the liner looks a lot ruder than intended.

So can you see why?

The aircraft, which should say “I love Cook’s Club”, displays a very different message when the doors are open.

In an unfortunate cock-up, one of the Os in Cook looks more like a C.

A passenger was so amused by the blunder that they decided to snap a picture.

The photo has since gone viral on popular Facebook page, A Fly Guy’s Cabin Crew Lounge. 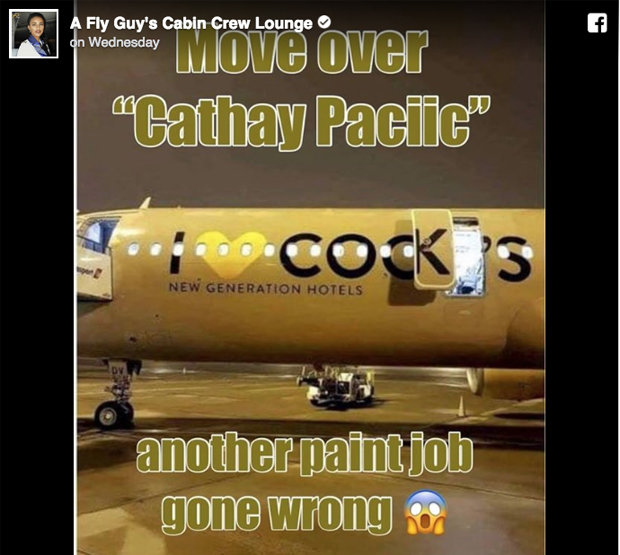 Despite the unfortunate error, many commented that the paint work was “hilarious”.

One Facebook user wrote: “I mean it’s a mistake but I’m sure some people love it.”

Another said: “Bahaha! This is fabulous.”

A third joked: “Someone is getting fired!”

Others likened the bungling efforts to matters that have happened in the past.

Many recalled a Cathay Pacific plane that accidentally displayed the words “Cathay Paciic”.

And another commenter wrote: “Haha reminds me of an airline in the 80s called Janus Airways…

“The name was below the windows and when the u/c was extended, on one side the J was obliterated.