One of Britain’s top holiday hotspots – Cornwall – is getting overcrowded during peak months because of a massive Airbnb boom, the county’s tourist board has revealed.

The staggering increase in Airbnb properties in Cornwall apparently played a major part in the county’s overcrowding issues over the summer – gridlocked roads, crowded beaches and packed car parks.

Visit Cornwall said that while there were just 17 Airbnb properties around the county in January 2016, there were 6,300 last January and about 9,000 in August. 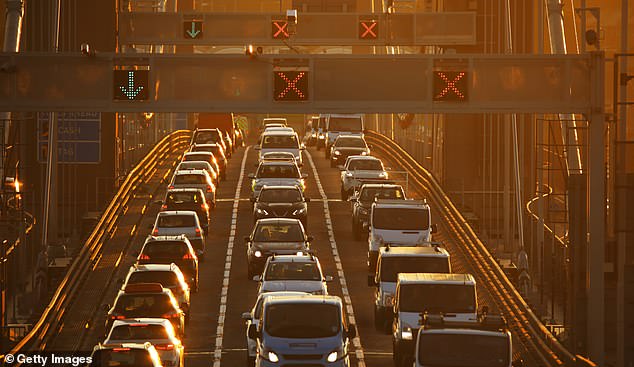 Cornwall, one of Britain’s tourist hotspots, is getting overcrowded during peak months because of a massive boom in Airbnb. Above, heavy traffic on the Tamar Bridge between Cornwall and Devon

And boss Malcolm Bell said a combination of glorious sunshine and balmy temperatures in June and July and an increase in the number of people trying to cash in by putting their home on sites such as Airbnb or Home Away, was to blame for record numbers of visitors.

Mr Bell, the chief executive officer of Visit Cornwall, told reporters that he believes the Duchy was so close to full capacity during the month of August that it would not have taken much more to tip the scales.

Mr Bell said Cornwall needs and wants tourists to come and stay and spend their money here. He believes local residents understand and accept that tourism is the lifeblood of the Cornish economy and a ‘necessary evil’.

But extra visitors year on year, partly due to the Airbnb phenomenon, could have a ‘detrimental effect’ on the whole tourism sector because there ‘comes a point when too many people is too much and Cornwall’s infrastructure and permanent population can no longer cope’. 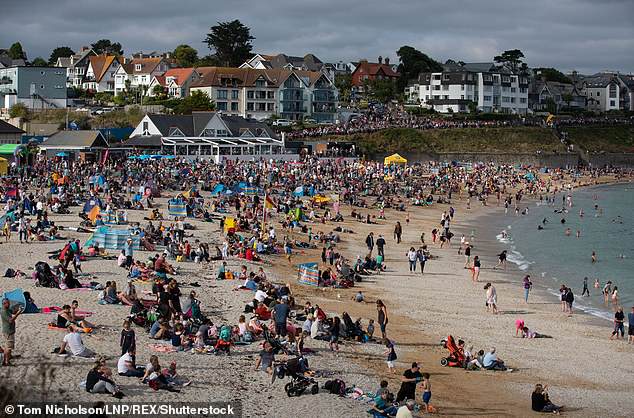 He continued: ‘The weather has certainly been a factor in attracting more people down. The fact the A30 is open also means many people who live in Exeter or Tiverton can be down in Cornwall for the weekend or the day in less than 90 minutes without the roadworks at Temple.

‘But Airbnb has definitely added an extra 15 per cent in visitor numbers this year which means in August we were close to being full.

‘Their contribution to the economy in May, June and July and September is much welcome but if we have 15 per cent more people year on year in August the scenes we’ve seen with car parks being full and locals and visitors not being able to get anywhere because they’re stuck in traffic will happen more and more often.

‘The last thing we want is for local people to become increasingly annoyed and frustrated with tourists. We want visitors to have the best experience possible and if they don’t then they won’t come back.’

Mr Bell said the perfect scenario is for visitors to come to Cornwall all year round not all at once – or at least over a staggered holiday period in the summer months.

Cornwall basked in rare glorious sunshine for six weeks this summer. But the attractiveness of Cornwall also led to scenes of beaches covered with beach towels and windbreaks.

Meanwhile clogged up roads and slow moving traffic along the A30 and A38 became the norm and car parking spaces were at a premium. In one instance, Pedn Vounder beach, which is barely accessible at the best of times, apparently was in such demand that an entire village became a no-go zone. 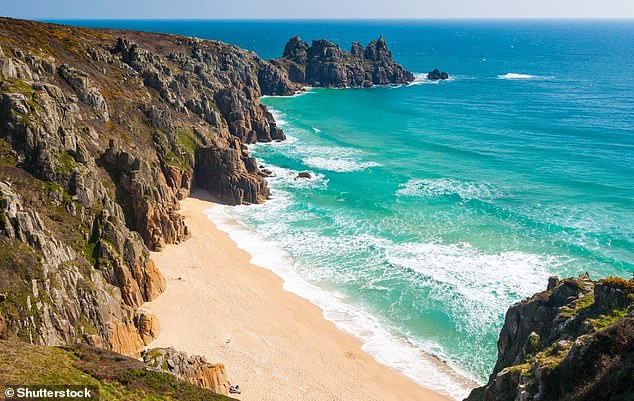 Pedn Vounder beach (pictured above), which is barely accessible at the best of times, was in such demand that an entire village nearby became a no-go zone

Visitors were said to have flocked to the place to the point of saturation with the village of Treen, perched above, coming to a stand still on several occasions this summer. To keep tourist levels at a manageable amount, Mr Bell believes there is one easy fix.

‘We had 180,000 visitors a day in Cornwall in August with an extra 20,000 on top of that thanks to Airbnb. If you think there are only 500,000 people living in Cornwall, we can see how we were so close to being at full capacity.

‘There is a fine balance between having tourists enjoy themselves and spending their money in local shops and having them and local people being annoyed, visitors not coming back and the impact too many people has on the environment.

‘There is one solution. Stagger the school holidays like they do in Germany. That way you extend the holiday season for nine weeks instead of six which is good for businesses and you ease the pressure.’

Visit Cornwall said it is not against Airbnb altogether but is campaigning to see the tech giant work with tourism bodies so all Airbnb ‘for rent properties’ in Cornwall and beyond comply with the same rules and regulations B&B and hotels have to adhere to, are registered with the local authority and pay fines for no compliance.

‘Guests using Airbnb accounted for just 5.8 per cent of the visitors to Cornwall last year, and the typical host on Airbnb is sharing their home for fewer than three nights per month. Hosts and guests using Airbnb boosted the South West economy by £295 million last year alone.’