Is it possible to snake your way through the rusty red landscape of the Outback, wake each day to stunning sunrises and witness some extraordinary wildlife? You can with The Ghan

Waking up at sunrise on The Ghan railway as it snakes through the Australian Outback ranks as one of life’s bucket-list experiences, especially if you’re a fan of the Golden Age of travel.

As the legendary train made its way through the red desert sands of the Northern Territory, between the towns of Katherine and Alice Springs, a deep orange hue bathed the sky before it was gradually eclipsed by the sun coming up over the horizon and peaking above the distant hills.

During breakfast – a sumptuous gammon steak with a fried egg, bubble and squeak rosti and a slow-roasted tomato – I chatted to David and Stephanie Harley, train enthusiasts from Sydney who prefer slow travel. 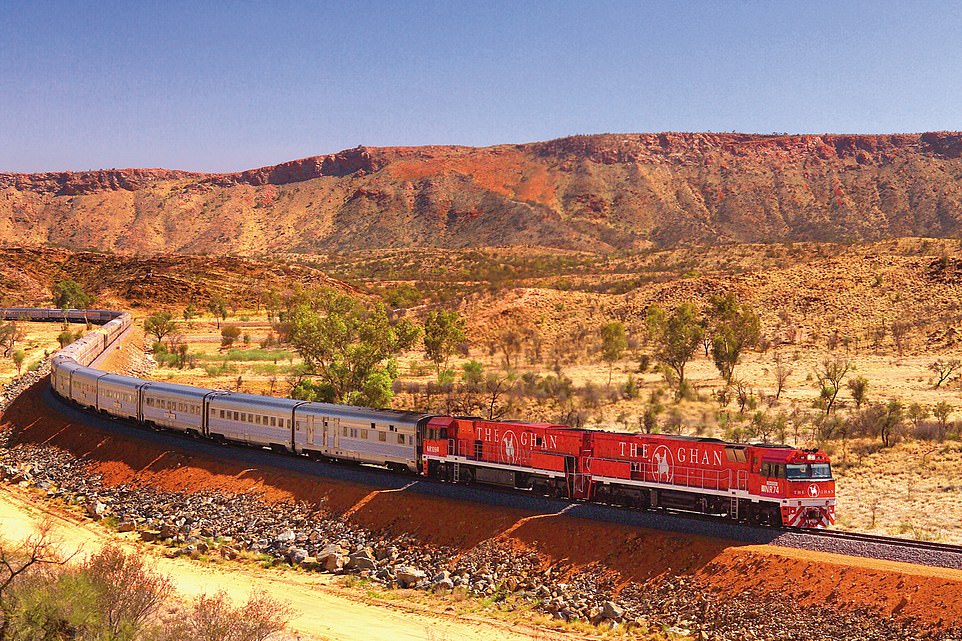 Beauty: Claudia Joseph boards The Ghan, the world’s longest passenger train (pictured), for a 1,850-mile, two-night journey through the heart of Australia

‘Where we live, we don’t get to see sunrise every day,’ says Stephanie, ‘so whenever there’s an opportunity I make the effort to set the alarm. We went to bed specifically with the blind up so that we would see it. It’s such a thrill every day.’

‘The sunrises and sunsets on our Outback holidays are the highlights of the day,’ adds David. ‘I love the desertscape and I can sit and watch it go by for hours, looking for animals, looking for birds. This morning the sunrise was spectacular. There was a really intense orange band across the bottom of the sky, which you rarely see, and then it grew until the entire sky was glowing orange. It was quite something.’

Certainly, sunrise was one of the high points of my trip on the world’s longest passenger train, which has become as renowned for its stunning views as it has its fine dining. 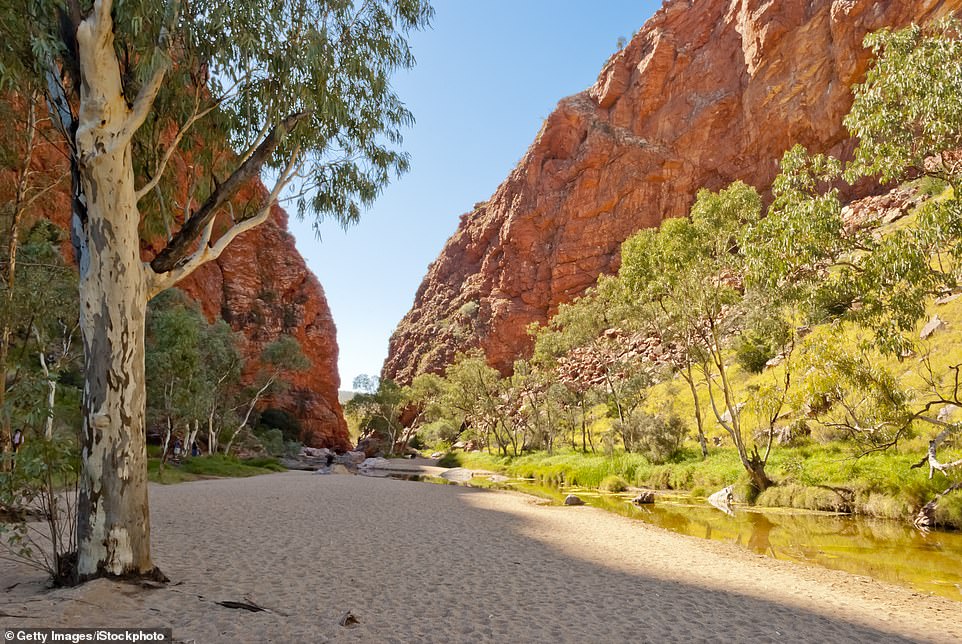 Claudia visits the sacred Simpsons Gap (pictured) near Alice Springs. She describes it as ‘absolutely breathtaking’ 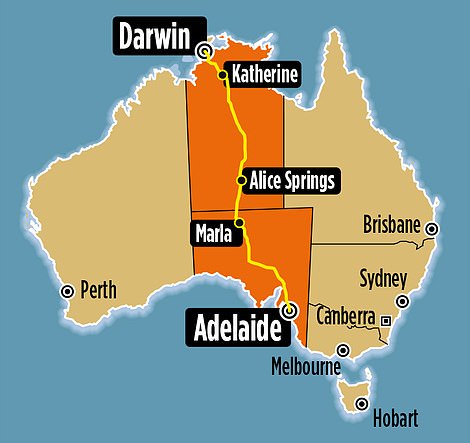 Originally dubbed The Afghan Express, after the pioneering camel drivers who blazed a trail into the heart of Australia during the 19th Century when it was opened up to explorers, The Ghan now hosts in excess of 28,000 passengers every year – more than 500,000 have embarked on the journey in total.

The origins of the line date back to 1877, but it was only on February 1, 2004, that it was fully completed, when the final section between Darwin and Alice Springs was opened and the train set off for its first transcontinental trip with 43 carriages.

State government bureaucrat Charles Mountford travelled on The Ghan in 1938 at the outset of his search for the remains of explorer Ludwig Leichhardt, who had gone missing in the massive Simpson Desert in central Australia some 90 years earlier. He wrote: ‘The train is always “mixed”, that is, it conveys anything that requires transport into the Centre – passengers, goods, livestock, motor cars and, on one occasion, a family of four hens and a rooster. At one station, these escaped and everyone on the train, even dignified and serious-minded professors, assisted to capture the cackling old hens.’

My experience began as I climbed aboard the 3,100ft red and silver train in Darwin, capital of the Northern Territory and the gateway to Kakadu National Park. I had joined 269 other guests and 45 staff to travel 1,850 miles through the heart of Australia on a three-day, two-night journey. Over the next 54 hours, until we arrived at our final stop in Adelaide, an ever-changing panorama would showcase the diversity of Australia. The tropical greens of Darwin and Katherine, dotted with galahs – or red-breasted cockatoos – magpies and Australian ravens; the rusty red landscape of the Outback and the MacDonnell Ranges; the pastoral hues of the plains, scattered with sheep farms, clusters of kangaroos and sleepy towns littered with dusty, broken-down buses and car wrecks.

After being shown to my wooden cabin, with its brass knobs and handles, a sofa that converted into bunk beds, and en suite loo that ingeniously converted into a shower room, I sipped the first of many complimentary glasses of bubbles and watched Darwin disappear as we travelled through lush landscape.

Our first lunch was a fragrant buffalo curry and mango parfait with a berry salsa in the Art Deco Queen Adelaide Restaurant, named after the consort of King William IV.

We then stopped at the Northern Territory town of Katherine. Known for being the location where ‘the Outback meets the tropics’, it is teeming with stunning gorges and misty waterfalls, thermal springs and ancient culture.

We disembarked for a three-hour cruise down the River Katherine and through Nitmiluk Gorge, and watched in awe as the dramatic ancient scenery, made up of 13 gorges, unfolded around us. The shrill sounds of cicadas reverberated off the cliff face and birds of prey flew overhead as we meandered down the swirling waters of the first gorge, before walking 300 yards over sandstone to get to the second gorge. 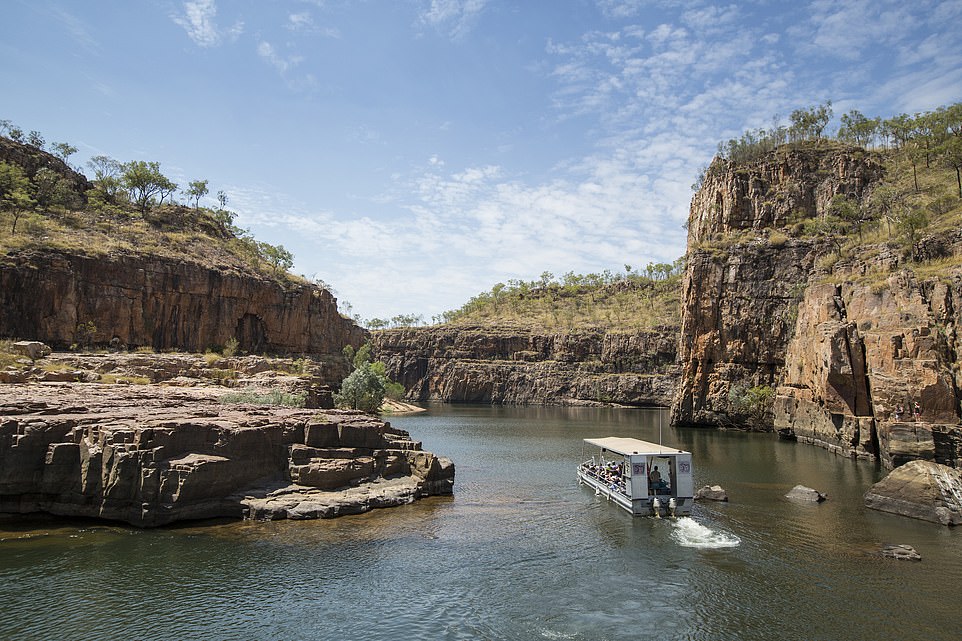 Dramatic: Claudia disembarks for a three-hour cruise down the River Katherine and through Nitmiluk Gorge, pictured 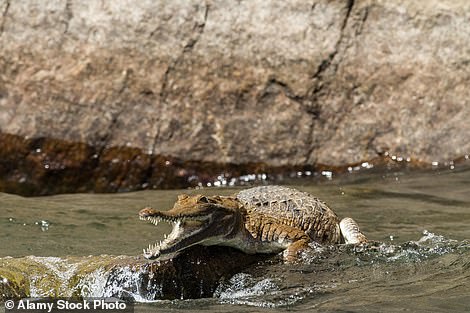 Take a snap: Claudia and her group spot a freshwater crocodile (file image above) on the River Katherine. Guides say they are safe to swim near…

After stopping to gaze at a huge cliff face – now known as Jedda’s Rock after the 1955 eponymous movie (the first Australian film to star indigenous actors and to be made in colour) – we spotted a freshwater crocodile on the shoreline.

‘Up here in the Northern Territory we get two different species of crocodiles that occupy the waterways,’ our guide Russell Cadwell told us, revealing that Katherine River was also the scene of a 2007 horror film, Rogue, about a giant saltwater crocodile terrorising a boat-load of tourists.

We made our way back to the train to change for dinner, stopping for a glass of fizz in the Outback Explorer Lounge. Shunning the grilled crocodile tail fillet, I chose cauliflower soup and braised beef cheeks, followed by artisanal cheese and an obligatory glass of port. Afterwards I had one of the most comfortable nights of my life – despite being in a bunk bed – lulled to sleep by the gentle rocking of the train and the sound of wheels rolling on the track.

By the time I woke up to that staggering sunrise, we were well on our way to Alice Springs, a cultural melting pot in the heartland of Australia, made famous by Nevil Shute’s 1950s romance novel A Town Like Alice. There you can follow in the footsteps of Aboriginal Australians, going on a three-hour tour of the West MacDonnell Ranges, home to more than 40 species of rare fauna, including corkwood trees, which the indigenous population used for boomerangs and shields because of their hard wood.

The landscape is dominated by river red gum trees – a eucalyptus native to Australia which has become known as the ‘widow maker’ because it randomly drops withered branches if it’s not getting enough nutrients, so not the best place to camp. 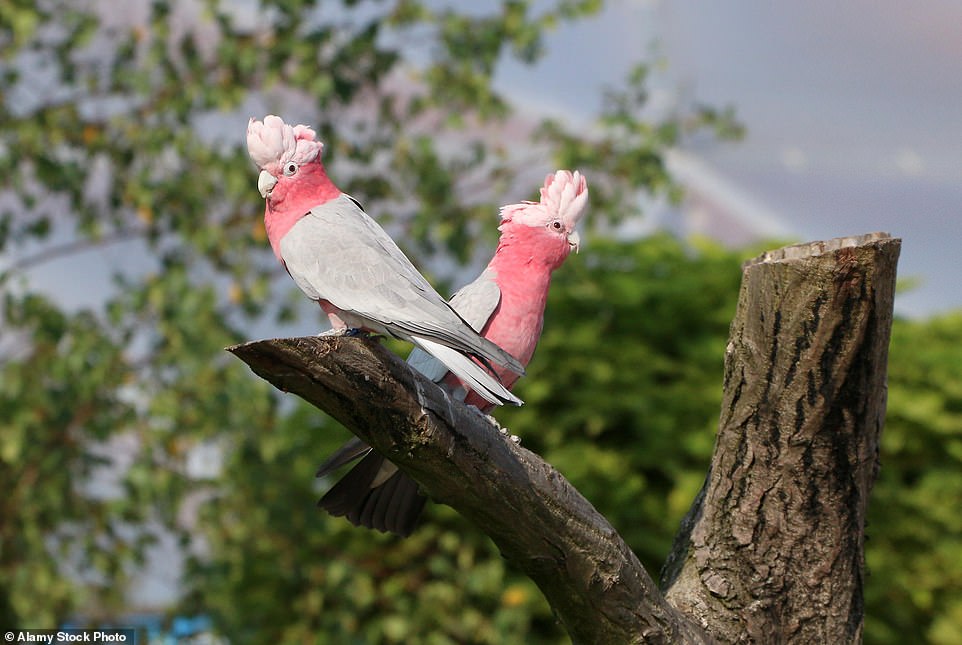 Claudia enjoys taking in the tropical greens of Darwin and Katherine, dotted with galahs – or red-breasted cockatoos (pictured)

Claudia Joseph was a guest of Journey Beyond Rail (journeybeyondrail.com) on a two-night, three-day journey on The Ghan, where a Gold Twin room costs from £2,800 (A$4,955) for single occupancy or £1,568pp (A$2,755pp) for double occupancy (prices subject to change).  There are also one-night and three-night itineraries. Visit australia.com for more information.

But we also spotted a 2,000-year-old ghost gum tree, a species that features heavily in the works of Aboriginal artist Albert Namatjira but is rare in the Outback as it usually grows in rocky areas. ‘It’s incredible to think it’s been here longer than any European,’ says tour guide Dahria Sharp. ‘What has this ghost gum seen in its life?’ Afterwards we visit the spiritual home of the Aboriginals, Simpsons Gap, one of the most scenic pathways through the ranges, which is absolutely breathtaking. Unlike nearby Roe Creek, which is an ‘upside-down stream’ – a dry riverbed with water under the surface – Simpsons Gap actually has a waterhole, which means that plants such as native figs, bush plums and bush coconuts grow on the surface.

‘This is a lifeline for the indigenous people,’ adds Dahria. ‘It provides shelter, water and food – and then, in that rockfall there, there is a family of wallabies so there’s meat. So it’s got absolutely everything. It’s one of the reasons it’s so sacred.’

Finally, after dinner, the train stopped at Manguri, a rail siding 30 minutes out of Coober Pedy in Southern Australia, where the Outback’s pitch-black sky revealed a carpet of brilliant stars.

Gathering around a bonfire, we enjoyed a nightcap and marvelled at the contrast in the sky. The following morning, we awoke on the outskirts of Adelaide and gazed out of the window as the train wound its way into the city, passing scattered territory towns and sheep farms. Like my fellow passengers David and Stephanie Harley, for me it was the sunrises and sunsets on The Ghan that I will never forget.