Growing apprehension among the traveling public about the coronavirus, officially known as Covid-19, is resulting in a noticeable slowdown not just in travel to China and Asia but in travel generally, a Travel Weekly readers poll revealed.

Of the 298 respondents to an online survey of advisors last week, 63.8% said they’d had clients cancel trips because of the outbreak, with nearly half, 45.6%, reporting cancellations outside of Asia.

Similarly, 50.3% said the virus was impacting forward bookings. Of those, 63.7% said they were seeing a slowdown in request for travel in general.

“Concern growing,” was the concise description offered anonymously by one respondent.

“It will get worse before it gets better,” predicted another respondent.

Other comments by advisors reflected an understanding that there was sometimes a disconnect between what is known and what is feared. 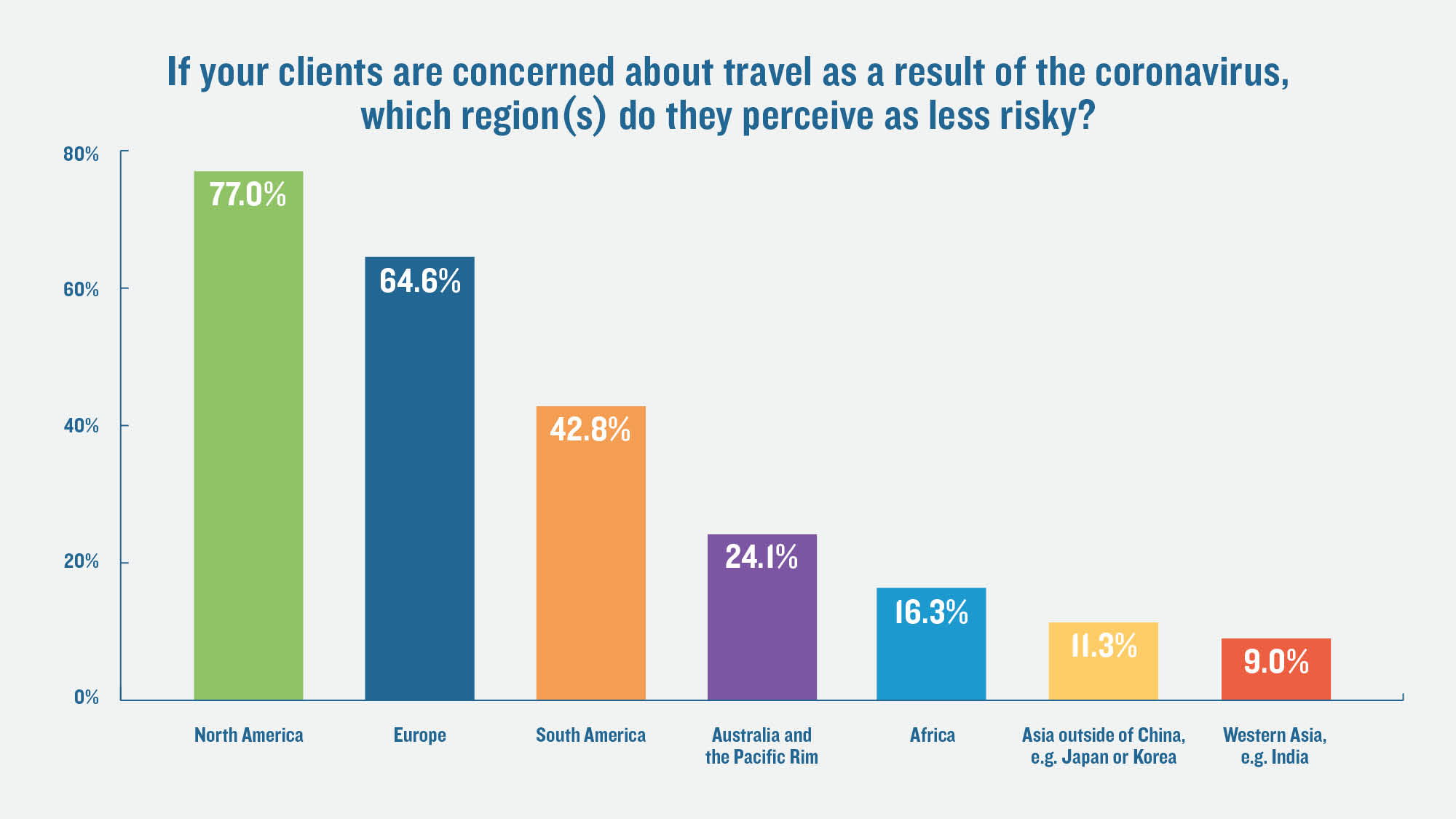 “People tend to be somewhat irrational at times,” one advisor wrote. “China is affected, so they don’t want to book a trip to Europe. I’m sure the hoopla will die down soon, but in the meantime, we’re chasing insurance companies, airlines, cruise lines and tour companies trying to find the latest information about potential cancellations.”

The online poll, conducted Feb. 6 through 12, is not necessarily representative of travel advisors as a whole because of the sample size and because respondents self-selected to participate. But it offers a snapshot of what is going on at agencies around the country as Covid-19 continues to spread and headlines detail the more than 1,000 resulting deaths as of Feb. 12, unprecedented travel bans, cancellations of flights, tours and cruises plus the lengthy and dramatic quarantines that have been implemented in response to the virus. 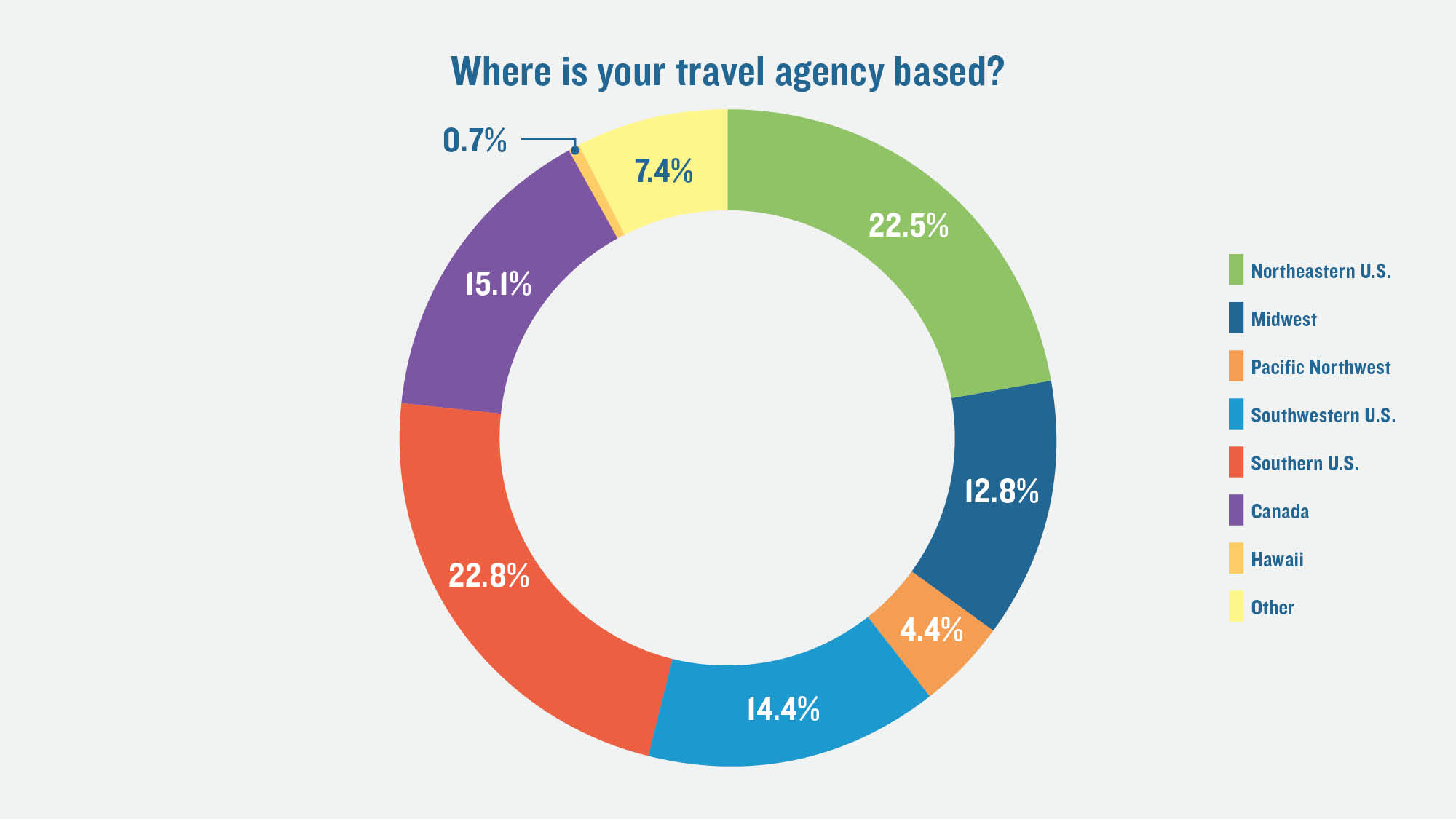 Holly Lombardo, an advisor with Travel Experts in Atlanta, responded that she had one client cancel a March trip to Spain for fear of being exposed to the virus while flying.

“Her desire not to travel was so strong she did not care that she took a $10,000 penalty,” Lombardo wrote. “I am receiving inquiries daily [about whether] their insurance covers it as a reason to cancel as well as clients [purposely] paying more for insurance that is … cancel-for-any-reason.” 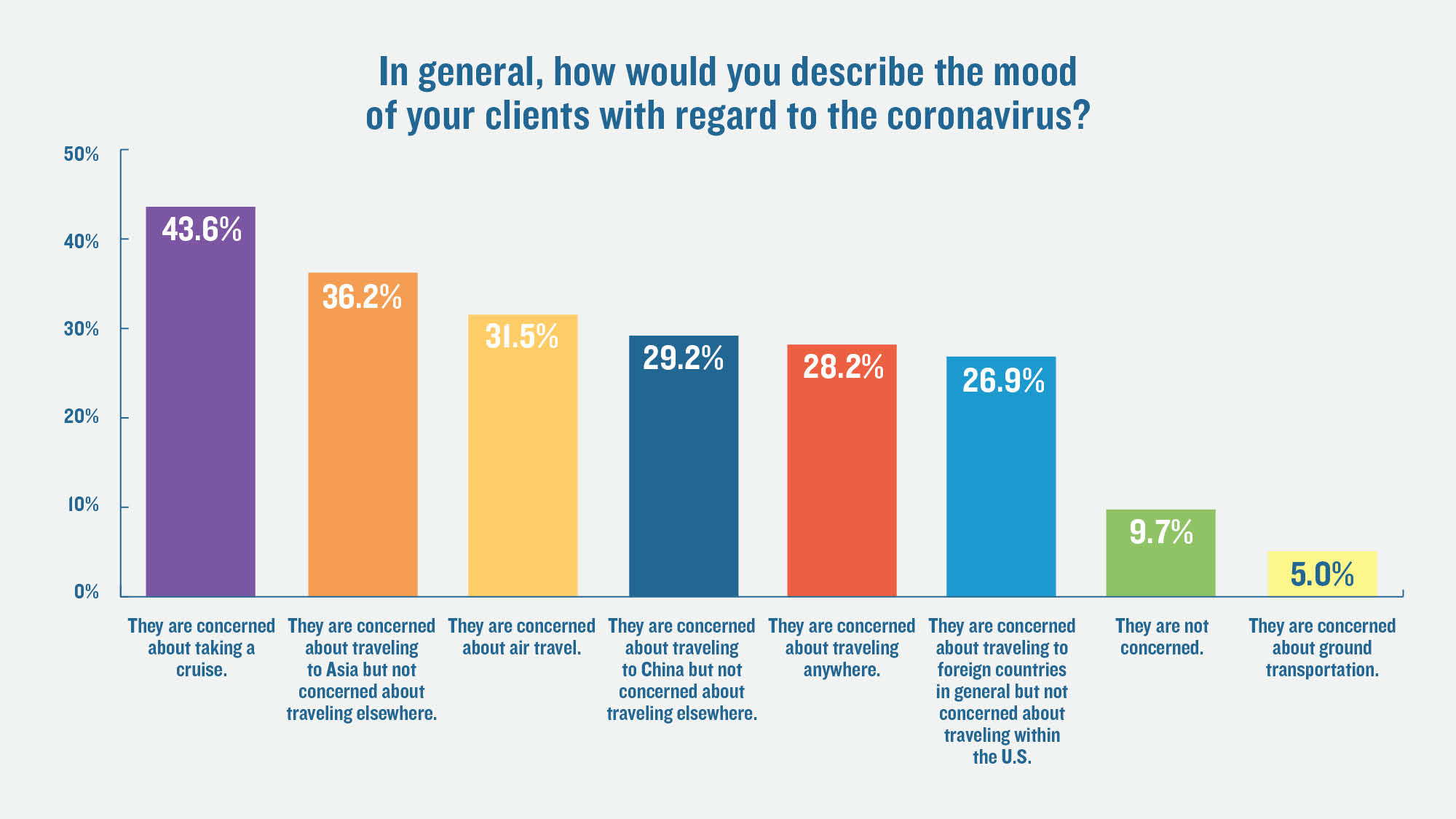 Philip Holland of GoAway Travel said he thinks “the full impact has yet to be seen. I think the first damage will be to cruise lines, as no one will want to risk quarantine onboard a ship. Second damage will be to any part of the world, excluding China, with any warnings or events between now and the future.”

China specialists obviously have been hit hardest, with cancellations of flights to and from China and the growing number of bans by countries and travel companies of travelers who have visited or traveled through the country.

Pacific Delight Tours, for example, which has been operating tours to China for nearly 50 years, this month suspended all operations due to cancellations and an uncertain future caused by the outbreak.

Hotel companies with properties in China were also suffering.

Wynn Resorts CEO Matt Maddox told investors on the company’s earnings call this week that its Macao business is burning through between $2.4 million and $2.6 million in operating expenses each day, just to keep its employees paid while its casinos and hotels are closed.

And Hilton CEO Christopher Nassetta said the company had closed 150 hotels in China and was bracing for a hit globally as Chinese travel to the U.S. and other markets was also expected to fall.

The slowdown in outbound Chinese travel could cost the global industry anywhere between $22 billion and $73 billion in lost revenue, according to various projected scenarios by Tourism Economics.

And with the traditional season for travel to China starting next month, cruise lines and tour operators have begun canceling planned departures in March and April. Some also began offering clients the opportunity to reschedule spring and summer trips to China.

Some cruise lines went even further, with Viking canceling all river cruises on the Yangtze through June and Norwegian Cruise Line canceling all of the Norwegian Spirit’s Asia itineraries from April 15 through December. 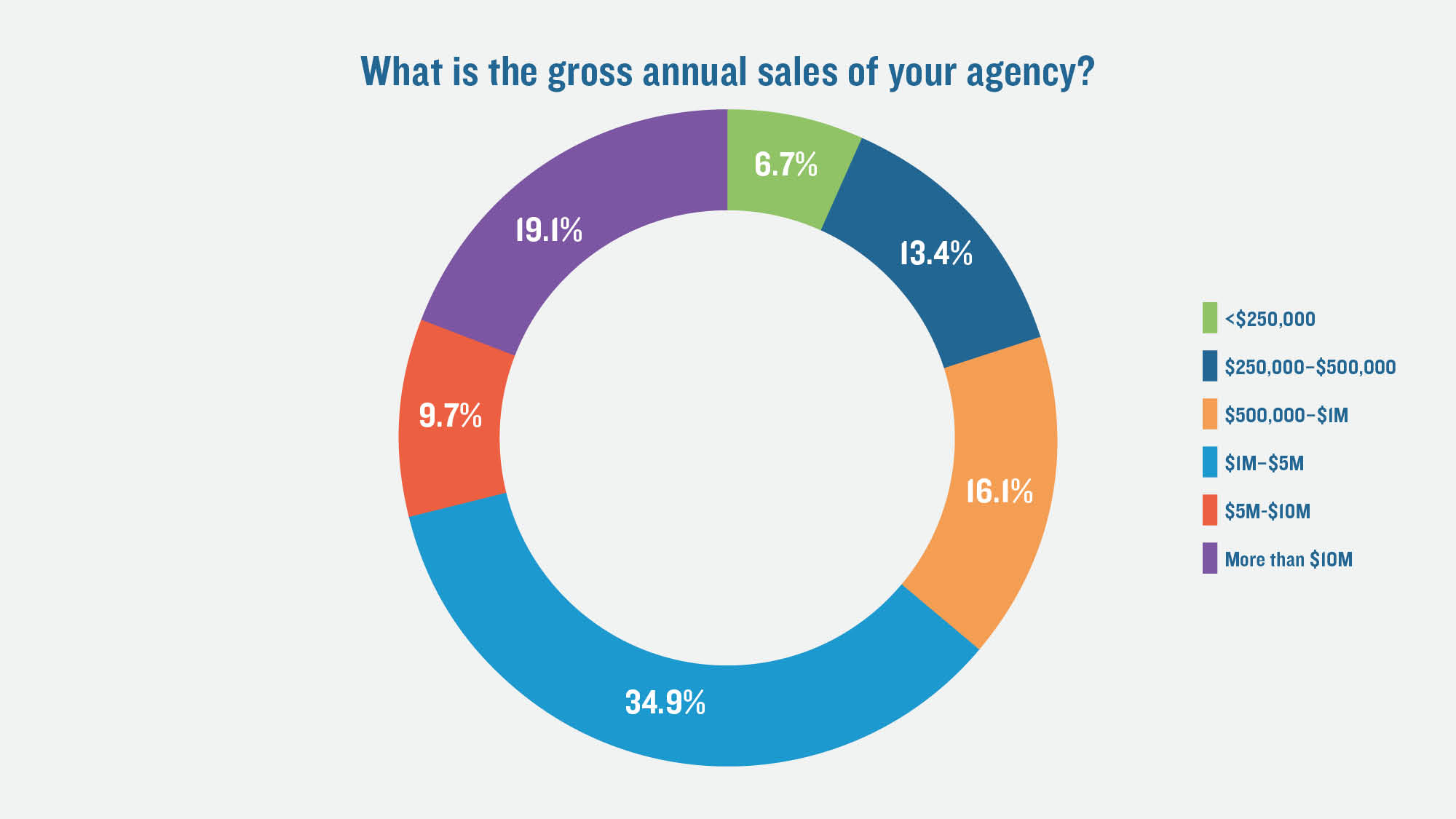 The changes were wreaking havoc among some advisors.

“I didn’t realize how many clients I had traveling to Asia this winter, until the virus hit,” wrote one respondent who didn’t leave a name. “The biggest impact, aside from lost commission as well as FedEx packages, which cost me several hundred dollars to ship to clients, is the many hours I spent on the phone and in emails between clients and the vendors. It has been very time-consuming, and I do not get compensated by the hour.”

Another wrote, “Unable to take any new business, as all of my working hours are taken up from clients in coronavirus areas at this time.”

But while China and Asia were taking the big hits, other regions, particularly North America and Europe, could benefit.

Steve Born, chief marketing officer for the Globus family of brands, which offers tours, packages and river cruises around the world, said that while the company was not seeing a noticeable decrease in sales to regions other than Asia, they were seeing upticks in sales elsewhere.

“Our European sales continue to surge for Globus, Cosmos, Monograms and Avalon Waterways,” Born said. “With that in mind, we have also witnessed a sharp increase in North America vacation sales for both Globus and Cosmos in the past few weeks. There is likely a correlation. Americans want to travel and take time away; they just may be more intentional with their destination choice for now.”

Not surprisingly, North America and Europe, followed by South America, were perceived as the safest places to travel, according to the poll.

Despite the immediate concerns, one poll respondent noted that “clients really want to go somewhere. They are in what I call ‘helicopter’ mode, chomping at the bit to travel but uncertain about what to do.”

“No question, the coronavirus has had a negative impact on travel,” she wrote. “Things happen that affect our business, but I have learned from experience the downturn won’t be forever, and we’ll get through this. Things will get better — and I know people will always want to travel.”