It looked like a gigantic tombstone, a monumental rectangular slab looming over the streets of Chinatown in Lower Manhattan, blocking out most of the sky. The great grey hulk was punctuated by tiny slit windows, each marking one of the 1,400 prisoners that would be stacked inside the vertical human storage facility.

This dystopian vision of a future Gotham was an image of one of New York’s proposed new high-rise jails, released earlier this year to cries of dismay, when mayor Bill de Blasio announced sweeping reforms to the city’s criminal justice system. It depicted an outline idea for one of the four new jails planned for the boroughs of Manhattan, Brooklyn, Queens and the Bronx, intended to replace the crumbling, violent, and roundly condemned jail complex on Rikers Island, nicknamed the “Guantanamo of New York”. 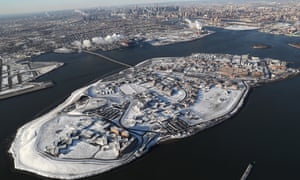 The height of the new jail towers was later slashed from 45 storeys to a maximum of 29, but the damage had been done. The images of these brutish concrete silos symbolised a rack’em and stack’em approach, attracting criticism from both prison reform advocates and the communities in which these fortified slabs were to be planted.

If properly designed to integrate with their surroundings, however, could there be an upside to this new generation of city-centre correctional facilities?

There is good reason to welcome the decision to close Rikers Island, a motion that was finally passed by the city council in October after months of heated public hearings. “A mass-incarceration model that stains everything that it touches,” was the verdict of former state chief judge Jonathan Lippman, who headed an independent commission into the city’s justice system in 2017. One former inmate-turned-campaigner described it as a “factory of despair”.

Situated in the East River, across from LaGuardia airport, Rikers Island has been a dumping ground for generations. It was used for military training during the Civil War, before it became a landfill site in the late 19th century, when mountains of ash from coal stoves gave it a surreal glow by night, smouldering like a volcano in the river. The first jail was opened in 1932, with a planned capacity of 2,200, but within a few years it was already holding 3,000 inmates. The island’s landfill and jail expansion continued to swell, until its peak of 20,000 inmates in the 1990s. It developed a sordid reputation for systemic violence and brutality, dogged by repeated scandals. In de Blasio’s words, it is a “crumbling, expensive, urban shame”.

But its closure, and the $8.7bn (£6.6bn) plan to build four new replacement jails by 2026, is no easy task. For a start, the proposals are predicated on a dramatic drop in prisoner numbers, from the present 7,000 to just 3,300 – the lowest since 1920. Elizabeth Glazer, director of the mayor’s office of criminal justice, says the target is eminently achievable.

“This is a decarceration plan,” she says. “There’s been a real change in how we think about the purpose of punishment, how we treat people, how to develop a relationship between officers and incarcerated.”

She says that over last six years the city’s jail population has dropped by 40%, while crime rates have also fallen, making New York the safest and least incarcerated big city in the United States. Some, such as Chinatown’s Ling Sing Association, question the need for new jails at all. Their plan calls for razing the existing facilities on Rikers and building a new state-of-the-art complex that would include hospital and mental health facilities, gyms and athletic fields, work-training centres and an area for farming. Abolitionist campaign group No New Jails has proposed closing Rikers without building a replacement at all. 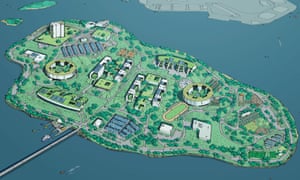 Holding large numbers of prisoners in high-density urban sites comes with constraints. Putting a high-rise jail in a built-up location means the windows have to be small, to prevent overlooking, while staircases, elevators and mechanical services have to be beefed up. Outdoor space is inherently limited. At a time when the incarcerated population is rapidly ageing – with prisons becoming some of the largest providers of elderly care – the logic of arranging a jail across multiple storeys is questionable.

“Two of the most important things needed by prisoners are privacy and freedom of movement around a site,” says Yvonne Jewkes, professor of criminology at the University of Bath, whose work has focused on the social and psychological effects of prison architecture. “It’s hard to imagine there’s going to be a huge amount of movement on such a small footprint, while privacy is likely to be an issue in these dense locations.”

She cites the example of the Metropolitan Correctional Center (MCC) in Chicago, built in 1975 as an icon of brutalist incarceration, which stands as a 28-storey triangular wedge in the middle of the city. With 5-inch-wide windows and a small rooftop exercise yard, it shows the grim architectural consequences of stacking prisoners high on a limited plot. Similar MCC towers were built in San Diego and New York around the same time, and they have rarely been copied since. “A high-rise dungeon in Manhattan’s financial district” is how Jeanne Theoharis, professor of political science at Brooklyn College, describes the MCC in New York, where many Muslim terrorism suspects have been held in inhumane conditions for years without trial. What guarantee is there that the replacement jails won’t just replicate these conditions and multiply the problems of Rikers four times over? 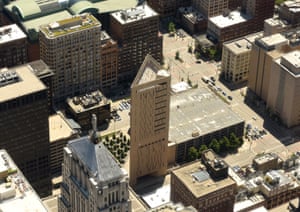 Some hope comes in the form of initial research by the Van Alen Institute, a non-profit architecture and urbanism organisation, which was charged with coming up with proposals for healthier and more rehabilitative jail infrastructure as part of the 2017 commission. The work brought together architects, environmental psychologists, criminal justice experts, former detainees and community members from across the boroughs to help inform what a new generation of “justice hubs” could be like.

Rikers 2.0: inside the battle to build four new prisons in New York City

“Accessibility came out top,” says Jessica Lax, a director at the institute. “Rikers was totally inaccessible by design, making it very difficult for family members and lawyers to get there. Many former inmates we spoke to found the process of being taken on and off the island so horrific that they didn’t want to go to court.” She says smell and sound were other key factors, with Rikers known for its repulsive cocktail of urine and rotting food, and its echoing cacophony of banging and yelling.

Their principles for what a decentralised jail network should look like focus on proximity to courthouses, to allow for faster due process and better access to lawyers, and emphasise improved post-release services to help former detainees return to a normal life. Crucially, the facilities can be used by both prisoners and local residents, to increase community connections and reduce the fear and stigma surrounding jails. Their proposals include dedicating multiple floors of the justice hubs to things such as libraries, community gardens, art studios, exercise facilities, medical clinics and social services – to be used at different times by both inmates and the public. 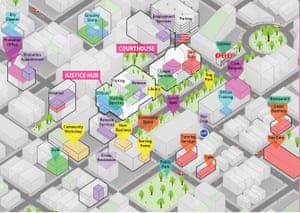 It is a radical conception that could help reduce stigma and aid rehabilitation. As Jewkes puts it: “Society tends to turn prisoners into dangerous ‘others’, and prisons are shrouded in myth and mystique. We should always try to make jails feel more like part of the community. Incorporating facilities that other people could use would help to break down some of the ideas about ‘them and us’.”

Still, there is no guarantee that the Van Alen Institute’s justice hub ideas will be taken forward. So far, the city has appointed corporate architecture giant Aecom, and consultants Hill International, to assist with developing the briefs, while detailed requests for proposals will be issued in early 2020.

‘By the time you’re through security you’re almost naked’: Rikers Island – a cartoon

“We will ask for the best and most capable designers in the world,” says Jamie Torres Springer, first deputy commissioner for the city’s department of design and construction, insisting they will prioritise high quality design. He won’t be drawn on details. “We’re currently articulating our goals and converting them into guidelines for our design respondents,” he says. Requests to speak to Aecom were denied.

Glazer says the new prisons will be “truly civic assets, both inside and outside,” with “a lot of thought given to external retail space and the kind of community space that might be appropriate at each site.”

The Bronx site, she says, will include affordable housing too. At the rate the city’s prison population is dropping, it might not be too long before the new jails are themselves converted into fortified apartment blocks.

Walks near me: Best walks near Reading – from riverside to Roman ruins
We and our partners use cookies on this site to improve our service, perform analytics, personalize advertising, measure advertising performance, and remember website preferences.Ok