Look up as you walk around Surat and you might spot “HFL 8.8.2006” daubed in red paint on a wall above your head. HFL stands for “high flood level”, and the inscriptions are 15 feet above the ground in places – a fading memory of the devastating floods of August 2006, which killed 150 people, according to official estimates (unofficial counts put the death toll at over 500). More than 60% of the city was underwater and damage was estimated at $2bn.

Surat’s geography – it lies at the mouth of the Tapi river, near the Arabian Sea – makes it prone to flooding, and it experiences a major inundation every four years on average.

But that threat does not stop people moving here, drawn by the hope of work in Surat’s textile and diamond industries, and the population has soared from 2.4 million in 2001 to around 6.6 million today. The UN estimates the city will be home to 10 million people by 2032, making it India’s eighth megacity, after Delhi, Mumbai, Kolkata, Bengaluru, Chennai and newcomers Hyderabad and Ahmedabad.

Where are the next 15 megacities?

By 2035 another 15 cities will have populations above 10 million, according to the latest United Nations projections, taking the total number of megacities to 48.

Guardian Cities is exploring these newcomers at a crucial period in their development: from car-centric Tehran to the harsh inequalities of Luanda; from the film industry of Hyderabad to the demolition of historic buildings in Ho Chi Minh City.

Read more from the next 15 megacities series here.

Surat, known as the “diamond city”, faces a triple flooding threat: from the Tapi and the Ukai dam upstream, from the Arabian Sea, and from the 19 miles of creeks that spread through the city. It constructed its first flood wall in 1664, and the battle to hold back water has been raging ever since. Climate change has only exacerbated the situation.

Ayesha Ansari is drying clothes near her one-room house beside the Mithi, one of six major creeks in Surat. She says her neighbourhood is submerged in knee-deep water most monsoons. “It is a nightmare, with the stinky sewage water gushing through the narrow lanes,” she says. 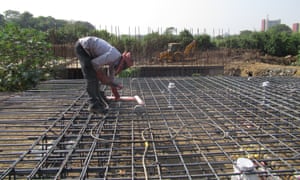 Now the creeks are being remodelled. The sound of workmen welding metal rods for reinforced concrete banks reverberates through the tranquil afternoon. “A retaining wall will channel the flow,” says Maulik Rao, the official in charge of the scheme. “There will be a biodiversity park too, with a garden, a pool and a cycle track.”

Some of the funding for the remodelling comes from Surat’s Smart City initiative, part of a national government scheme launched in 2015 in 100 cities. The city is spending around £300m on projects including the live-tracking of buses, new water treatment plants, solar and biogas generation, and automated LED street lights.

The Tapi poses an even bigger risk. After floods in 1968 the government built the Ukai dam upstream with the aim of managing the flow of water to Surat while also generating hydroelectric power and irrigating farmland – but these different priorities are often in conflict, says Gopalakrishna Bhat, the chair of Taru Leading Edge, a consultancy and think tank.

“Today, the dam has become the water source for many cities and industries. The pressure of maintaining maximum storage from the dam is far greater.” 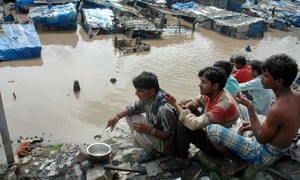 The expansion of the city is making matters worse. Since the last big floods in 2006, Surat’s geographical area has almost tripled to 326 sq km (126 sq miles).

“The city used to exist only on one side of the river,” Bhat says, “but it is now expanding on both sides, and there is little flood plain left.”

After the devastating floods of 2006, the municipal government set up an early warning system and started work building an embankment for the river. “The fire department does mock evacuation drills with schools and other institutions,” says the, municipal commissioner M Thennarasan. “Our website and mobile app have details of the water level in the Ukai dam. In case of an emergency, we can push warning messages to the people of Surat.”

These measures were put to the test in 2013 when the early warning system predicted heavy rain when the dam was already full. “Because we had an early idea, we decided to deplete the dam two days before the rainfall was expected,” says Chaitanya Bhat, deputy municipal commissioner. “Otherwise the dam authorities would have been compelled to release water and the city would have been flooded.” Disaster was averted. 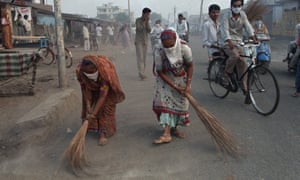 But Gopalakrishna Bhat says Surat will only face ever bigger risks. In a 2013 paper he predicted the number of days with more than 200mm of rainfall would increase. “This would lead to the need for a greater number of emergency releases from the dam reservoir and increase the frequency and intensity of floods in Surat,” he says.

“It is estimated that around 90% of Surat’s geographical area is affected by some type of climate hazard – whether flooding, coastal storms and cyclones or inundation associated with high tides and sea level rise. Much of the city and its surrounds are less than 10 metres above mean sea level.”

The dangers are compounded by the rapid expansion of Hazira, a port 15 miles from Surat built on reclaimed sections of flood plain, which has triggered major hydrological changes. The port has effectively narrowed the mouth of the Tapi where it meets the sea. “The large-scale industrial development at the mouth of the river causes a rise in the water level immediately upstream,” Bhat’s paper noted.

The city has reached the stage where it must accept that future floods are inevitable, Bhat says. “We have to learn to live with the floods, and manage them in a way so our life is not disturbed too much.”