After years of closure, the world’s highest and second-longest cable car reopened earlier this year. This epic piece of engineering was built in the 1960s to take passengers on the 12.5km journey from Mérida to 4,756-metre Espejo Peak. It was closed in 2008, but modernisation works did not begin until 2011. In April this year it came back into operation and passengers can take a vertigo-inducing ride to its final station above the clouds.
• telefericodemerida.travel 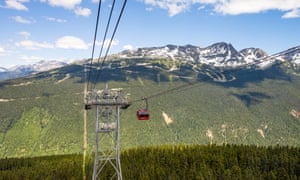 Another record-breaker (the longest free span between ropeway towers – 3.03 km, if you’re wondering), this cable car in Canada’s Pacific Coast Ranges offers passengers 360-degree views as they float between Whistler and Blackcomb mountains. With a panorama encompassing volcanic peaks, coastal rainforest and glaciers – as well as the chance of spotting a black bear – an 11-minute ride will barely seem long enough. Summer and autumn activities in Whistler itself range from hiking the countless trails to mountain-top alfresco dining.
• whistlerblackcomb.com 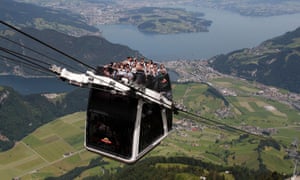 Want to feel the wind in your hair as you ride through the sky? A bit like the cable car equivalent of an open-top bus, the Cabrio cable car has two decks, with the roofless upper deck providing unbeatable photo opportunities of Lake Lucerne below, unobstructed by glass panes or even the cables themselves, which are connected to the sides of the car. The route up to the 1,900-metre Stanserhorn starts on an 120-year-old funicular railway; the Cabrio makes the final trip to the summit, where the panoramic theme can continue with dinner at the Rondorama revolving restaurant.
• stanserhorn.ch 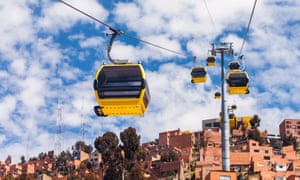 While many cable cars (especially those of the 360-degree rotating variety), are designed as a tourist novelty, some provide vital transportation. This is the case in La Paz, which launched its ambitious cable car system in 2014 in response to the city’s overwhelming traffic problems. The route, which travels from La Paz to the even-higher-altitude city of El Alto (at 4,150 metres), affords passengers an impressive view of the city and the Andes. Gliding above the rooftops, the red, yellow and green gondolas are a great – and affordable – way to see the cities from a different perspective, while it’s also worth thinking about the cable car’s role in the lives of the citizens who use it. 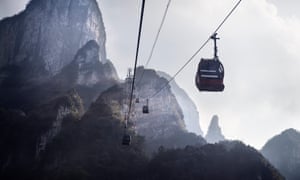 There’s a certain intensity to the mountains in Hunan province, which rise from the ground in steep, dramatic columns. There’s lots of opportunity for visitors to test their fear of heights, with a 1,400-metre-high cliffside walkway and three glass skywalks, the most recent of which opened last month (and then promptly closed down again to undergo “an internal system upgrade”). It also has the world’s longest cable car ride, which takes 30 minutes to travel 7km and concludes with an incredibly steep 37-degree drop. Passengers look down across the forest-covered valley and can see the notorious 99 bends road – a winding mountain route leading to Tianmen cave, a gaping hole in a rock wall, better known as Heaven’s Door. 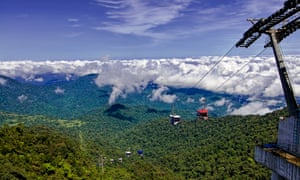 Flying over lush tropical rainforest, the Genting Skyway is south-east Asia’s longest cable car. Opened in 1997, it carries passengers in brightly coloured, eight-person gondolas up from a base station at Gohtong Jaya to the Resort Hotel in the Genting Highlands, skimming over the jungle canopy below. Since its also south-east Asia’s fastest cable car, the 3.38km journey is a quick one, taking just 11 minutes to reach the top.
• rwgenting.com 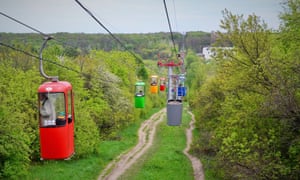 In the urban setting of Kharkiv’s Gorky Park, this lift – built during the Soviet era – is a little different from the cable cars that swoop over wild valleys and mountain ranges. But the ride is no less emotive: there is something particularly romantic about the small, brightly coloured gondolas. The journey takes around 20 minutes and though it’s not high-altitude – the height it travels at ranges from 8 to 26 metres – it still offers that sense of peacefully flying over the city that only a cable car can provide. 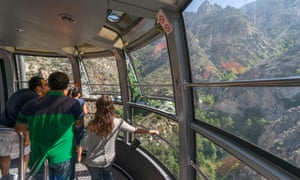 As this list probably demonstrates, cable cars do tend to strive for world records. The Palm Springs Aerial Tramway is no different. It may not be the longest, or the highest, but it is the world’s largest rotating tram, slowly turning as it makes its ascent and descent. It took 23,000 helicopter rides and 26 months of construction to complete the cable car, considered a “historical civil engineering landmark” by the time it opened in 1963. The tramway travels up the sheer cliffs of Chino Canyon, taking passengers to the untouched wilderness of Mount San Jacinto state park, with 54 miles of hiking trails, perfect for camping adventures and cooling off in the hilltops above the southern Californian heat.
• pstramway.com 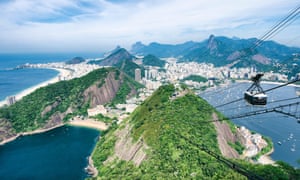 Few cities can match the epic, scene-stealing geography of Rio de Janeiro, where the neighbourhoods and favelas are dwarfed by lush green-coated peaks, ocean bays and long sandy beaches. If ever there was a city you’d want a bird’s eye view of, it’s this one. No surprise, then, that the Sugarloaf Mountain cable car is one of Rio’s most popular attractions, visited by more than 37 million people since opening in 1912 (it has been modernised since then). It has also proved an attractive site for stunts: it features in a fight scene in the Bond film Moonraker, and has been walked by tight rope walkers – something to think about as you glide safely to your destination.
• visit.rio 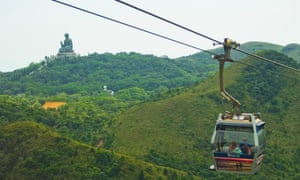 One of the best ways to get a sense of the scale of the Big Buddha – the majestic 26-metre high bronze statue in the mountains overlooking Hong Kong – is to view it from the Ngong Ping 360 cable car, which whisks passengers up to Ngong Ping, where the Buddha is located, and the Po Lin Monastery, which has a beautiful garden and a vegetarian restaurant.
• np360.com.hk