At first glance the village of Purleigh, on the Dengie peninsula in Essex, does not look like an obvious place for radicals. A crow is gently muttering to itself in the horse chestnut tree when I arrive and a man is opening the cricket pavilion. Generations of people, however, were drawn to these flatlands east of London in the late 19th and 20th centuries to create their own vision of Utopia in a succession of pioneering communities.

I cycle away from the village along lanes where greenfinches wheeze in the hawthorns, sounding like car mechanics sucking air between their teeth as they write off your motor, to my first stop, Colony House. Other than the name, little remains of the Purleigh Colony, an anarchist community founded here in 1896. They kept a goat, grew tomatoes and gave up on currency. All was good until the crops failed because of some members not pulling their weight and others being accused of “insanity”. Three years after it opened, the remaining members hopped on their bicycles and took off to the Cotswolds. 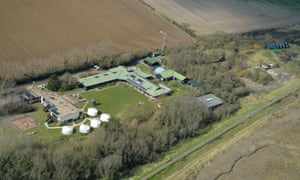 I hop on my bike too, and cycle to Steeple Creek. Across the channel lies Osea Island. Today Osea sports swanky cottages, but it was once home to a Temperance Society, set up by the brewer Frederick Charrington in 1903 after he’d witnessed a drunken brawl outside a pub with his name on the sign above it, and began to have second thoughts about the family trade.

At Bradwell-on-Sea, a few miles further east, I take a diversion to a little settlement of hand-built clapboard houses at the foot of a power station. These Plotlands homes were the countryside dream of the East End poor. A way of escaping the pollution of the city and building a world of their own choosing. The plots are hidden behind high hedges, I don’t blame them. Keep it secret, keep it safe. Such autonomous communities have a habit of upsetting the powers that be and being swept away, “for the greater good”. 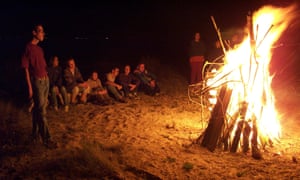 Back in the village, a wooden sign marks the way to the Othona Community, my final destination, at the far east of the peninsula, where I have signed up for a spring working weekend.

Othona was set up following the second world war by RAF chaplain Norman Motley as a place for people of all faiths and none to find reconciliation and renewal. It is a place to eat good homegrown food, sleep huddled beneath blankets in a yurt while barn owls call on the marsh, and talk on the sunny veranda beneath the grapes. Options for visiting Othona include activity weeks for families, singing weekends, music weeks and wildlife watching breaks – but by joining one of the working weekends that run several times a year I’m helping maintain the place. A holiday that gives something back.

For the next two days, guests of all ages get stuck in, weeding the gardens, planting veg and baking in the kitchen. With no television, the kids entertain themselves, playing football or swimming in the sea. I paint a hut in the sunshine, learn how to knead dough by hand, have conversations of real meaning with people I have just met. 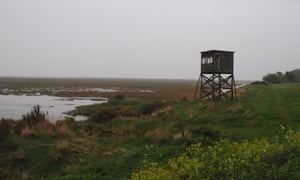 The days are punctuated by bells: breakfast, chapel, lunch, dinner. Chapel services are religion with a light touch, where we talk about nature and community within the simplicity of St Peter’s Chapel, which stands alone, gazing out to sea, as it has done since 660AD. Here the evening light falls on the Roman bricks, and Douglas Adams found the meaning of life, the universe and everything by counting the 42 panes in the chapel window.

I slow down, I feel healthy, I have a mobile phone … somewhere. The 21st century is somewhere else, and can stay there for now. When the working day is done I scrub off the paint smudges in the solar-heated showers and lie under a blossoming apple tree reading a book, or walk down to the shore and search for sea urchins and mermaid’s purses.

I pass the buildings of the original Othona – old Nissen huts where people slept in bunkbeds, cooked in a tent, washed in cold water. This spartan existence is not for everyone; now guests are housed in a building created from straw bales and rammed earth, and eat in a large dining room on tables adorned with photos of people who came here, found love and returned with their children. 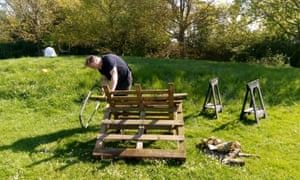 On the final morning I feel as if I have known my fellow workers forever and have been away for two weeks, not two days. We reflect on what the weekend has meant to us. It feels good to be on a break that will be of benefit to future visitors – kind of paying it forward – and to have shared the experience with like-minded souls. Sarah wants to bottle it in a jam jar and open it on a day when life is not so good. Rachel mentions that feeling of equality. “No one cares what you do in the real world here,” she says. “That drops away and you see the person underneath.”

Othona has endured when so many other Utopian experiments in Essex have failed. Maybe it is the simple recipe of community, worthwhile work and closeness to nature that offers as much to people harried by life now as it did at its founding. It is as the slogan goes, “a place to simply be” – and there’s nothing so radical in wanting that.