With the air of melodrama unique to chic French women, the lady opposite me yanked open the overhead window then sat back down, grumbling to no one in particular and fanning herself with a copy of Paris Match. An aroma of pine filtered into the carriage and a breeze cooled my brow as the train clattered south to Béziers. Edging up to the window, I looked down to where a curl of sand and green water had appeared, an oasis where children bobbed about in dinghies and leapt off limestone rocks. This was the essence of why I love train travel: it allows me to see what’s behind the trees in the Massif Central; to smell the coconut being fried in huts in Kerala; and to spot rainbows hovering in the spray of Niagara Falls. 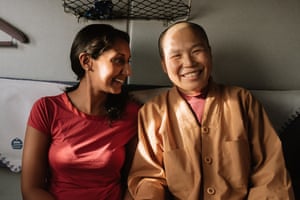 A week earlier I had set off from London St Pancras to Paris with the aim of travelling around the world in 80 trains. In 2010, I had travelled around India in 80 trains and come away in thrall to the railways – so much so that I decided to embark on a global railway adventure. For a long time, the rise of high-speed trains and budget airlines appeared to threaten the notion of romantic rail travel. But I wanted to see what slow travel means to people all over the world and what long-distance trains still have to offer the modern-day traveller. Hanging a map on my wall, I pinned cities of interest and tied coloured string from one to the next, watching the next seven months of my life wind around the world with surprising simplicity. With the exception of visas for Russia, China and Vietnam, few logistical issues arose. I bought rail passes for Europe, Japan and America, and booked long-distance journeys such as the Trans-Mongolian and The Canadian, before setting off, sewing in the other trains with ease.

Over the first four weeks, Europe’s TGVs, AVEs and Freccia Rossas swept me from city to city, allowing me to lunch on cassoulet in Toulouse and be in Barcelona in time for a dinner of gambas al ajillo. Punctual, quiet and efficient, the air-conditioned trains fulfilled their primary purpose – taking me from one destination to the next – but they were devoid of soul. Passengers boarded, stashed their bags and sat in silence, staring at phones and munching paper-wrapped panini. I threaded through Italy, Switzerland, Germany, Poland, Lithuania and Latvia before arriving in Moscow to board the Godfather of trains – the Trans-Mongolian to Beijing. It was here that the journey truly began… 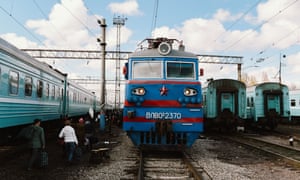 On the morning of departure, sirens wailed and police cordons appeared around Moscow, closing metro stations and blocking access to supermarkets owing to the arrival of Vladimir Putin at the Kremlin. This meant I was unable to stockpile anything other than a four-pack of instant noodles, a couple of Kinder Bueno bars and all the biscuits and herbal teabags from my hotel room before embarking on the four-night leg to Irkutsk in Siberia.

Once on board, I surveyed my compartment – complete with cracked window and condom wrapper under the berth – before wandering up the corridor, glancing into my neighbours’ digs and wincing at the smell of dried omul (a fish found only in Lake Baikal) drifting in a warm fug. Long and thin as though ironed into strips, the yellowing fish was a staple in the makeshift pantries set up by my companions, along with loaves of bread and rounds of cheese wrapped in wet cloth. Breaking into a panic, I followed the tiring sound of Euro-trance and found the disco-dining car, relieved to see a kitchen, even though the chef was lighting a cigarette off the hob while smiling at me. 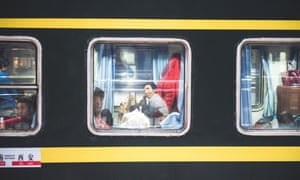 Once the train had jolted out of Moscow, I slid into a red booth and tucked into a slightly faggy-tasting pork escalope draped in dill. As we sped through the bleakness of the suburbs, I was joined by Aleksandr and Aleksandr, both in Adidas vests and sliders, and wondering what on earth I was doing on board.

“This train is trash, I hate it!” declared Aleksandr I, a young lawyer. A lack of roads meant that he was condemned to using the Trans-Mongolian twice a month to attend court hearings 13 hours away in Kirov: one person’s bucket-list adventure is another’s nightmare commute. He said he had never seen an English person on board the train which, it transpired, was a domestic service used by Russians only – rather than the fancy Rossiya service preferred by tourists. Aleksandr II was visiting his parents, a five-day journey away, and was convinced I was a spy, photographing every page of my diary under the guise of liking my handwriting.

In between attempts to read War and Peace, I spent the next four days lying in damp, tangled sheets watching leafless trees flit by the window. Most afternoons I’d play cards with kids or swap tat with soldiers, offering second-class stamps in exchange for a tube of Pringles or a smoke grenade, enjoying the clamour and constant companionship. But at dusk I’d stand alone in the corridor meditating on the mists as they swirled in great halos. Charged by the sight of the world moving at pace before my eyes, I’d still myself, knowing I was privileged to witness how deeply this train carved through the Earth, shining a light into its darkest corners. 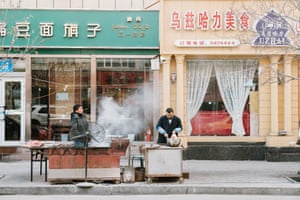 Like most travellers, I broke up the journey in Irkutsk and spent a day chugging around Lake Baikal on the old Circum-Baikal steam railway before boarding the overnight Rossiya service to Ulaanbaatar. Fitted with soft-cushioned berths, automatic doors and heated toilets, the train rocked me into gentle slumber until I was screamed awake in the pre-dawn darkness by a sadistic provodnitsa (carriage attendant).

Often, an unavoidable side effect of long-distance train travel is finding yourself at the mercy of awkward timetables. Faced with the dilemma of spending five days in Mongolia – which wasn’t enough time to trek across the countryside – or a measly two nights in the capital Ulaanbaatar before the final leg to Beijing, I opted for the latter, spooning up mutton broth with students at a popular restaurant called Modern Nomads, where the staff wore Genghis Khan outfits and white-collar workers sat around drinking Johnnie Walker and watching bad music videos. The following morning the final train thundered towards China across the Gobi desert, a thirsty, rust-red terrain mottled with tufts of yellowing grass. In the distance sat round nomads’ gers, their funnels piping smoke into the sky, double-humped camels tethered to the ground. 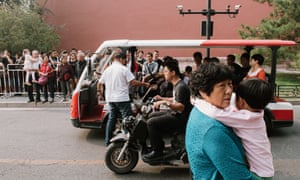 It had been almost six weeks since I’d glided out of St Pancras, and I was 6,000 miles away, all of which I’d covered by rail. Inching through forests, curving around coasts and burrowing deep into the guts of towns and cities, these slow trains had destroyed my concepts of distance and space, and replaced them with a new truth: that we couldn’t be more close or connected. From one country to the next, I’d sat at the foot of my berth, my view universal: hawkers sold their wares, lovers held hands, and children played football. I’d watched the skies close in, the ground level out, the seas pull apart and the land unlock. And now, as we sped towards the Chinese capital, billboards closing in, wires swinging low and buildings edging towards the tracks, I felt an undeniable sense of place. Slowing into the station, the train creaked and came to a halt. Through the roar of the crowd, rumbling of cases and muffled announcements, I stepped on to the platform and allowed Beijing to sweep me into its embrace.

How to do it

The Eurostar from London to Paris starts at £44 one-way. Consider an Interrail pass for travelling across Europe: a seven-days in one month option covering 31 countries costs £260 adult or £ 216 youth. There is also a weekly train direct from Paris Gare de l’Est to Moscow from £267 one-way (see seat61.com for details).Booking from Moscow to Beijing takes a bit of planning as each segment needs to be reserved separately; Real Russia’s advisers can help with what can be a daunting exercise, booking each segment, making hotel reservations and organising Russian and Chinese visas.

The paperback edition of Monisha Rajesh’s Around the World in 80 Trains is out on 23 January (Bloomsbury, £9.99)