The Batu Caves temple on the outskirts of Kuala Lumpur in Malaysia has, from last week, a vibrant new entryway, with the 272 steps up to the popular site painted in rainbow hues. Why should ascending and descending ever be bland? Mosaic, musical or mountaintop, statement staircases the world over offer ever more fanciful ways to go up and down. But while devotees and visitors might be tickled pink by Batu’s Technicolor makeover, the government’s national heritage department is seeing red.

Around 13km from the Malaysia capital, the Hindu temple complex is a series of cavernous spaces inside limestone rock, housing ornate shrines. It attracts worshipers and tourists, particularly for the annual three-day festival of Thaipusam (late January or early February, depending on the Hindu calendar). Just outside it stands the world’s tallest statue of Murugan, the Hindu god of war, at 42.7 metres high. 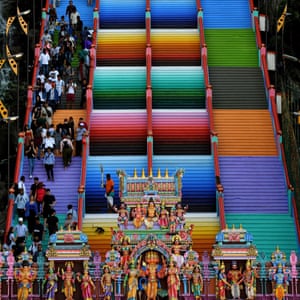 The staircase, originally built in the 1920s from wood and later replaced with stone, was painted in dazzling rainbow colours in preparation for this week’s temple consecration ceremony (Kumbhabhishekam), which happens every 12 years. It forms part of a wider renovation project of the temple site, costing around £1m.

Members of the temple’s management are in trouble for not obtaining the correct written permission from the national heritage department for the work. The local press reported that a warning letter would be issued by the national heritage department. Deputy culture minister Muhammad Bakhtiar Wan Chik said that the work had “disturbed the harmony, integrity and originality of Batu Caves”. He urged others running heritage sites to seek the required consent before carrying out any major renovation.

Tan Sri R Nadarajah, from the temple’s management, has told local media that they had in fact received approval, including from the local council – although the council are denying this. What will become of the rainbow staircase is still unclear.

Elsewhere in the world, tourists can climb a mosaic masterpiece in Rio, play a tune as they walk in San Francisco or negotiate an infinite staircase in Munich … 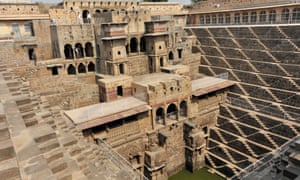 Consisting of a maze-like geometric pattern of 3,500 narrow steps over 13 storeys, and around 30 metres deep, Chand Baori in the village of Abhaneri, Rajasthan, India, is the world’s largest step well. It was built around the 9th or 10th century by King Chanda, and is thought to have been dedicated to Harshat Mata, the Hindu goddess of joy. As well as a source of water, step wells were a place for meditation, prayer and bathing. 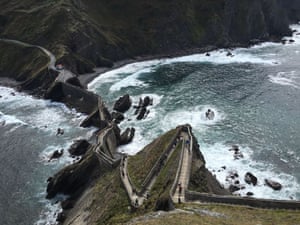 In the Basque country, around 40km from Bilbao, a winding medieval staircase bridge connects a Spanish island to the mainland. Gaztelugatxe, also known as the “stairs above the sky”, was built in the 11th century and has 241 steps. Along the narrow route several smaller staircases leaddown to the water. The church, the only building on the island, has been ransacked and destroyed several times over the years, but always rebuilt. According to legend, visitors should ring the bell at the entrance three times and make a wish. 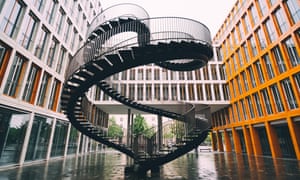 Visitors might find themselves on a road to nowhere with the Infinite Staircase in Munich, designed by Danish artist Olafur Eliasson in 2004. Two interlocking spiral staircases create a continuous loop in the form of a double helix. Called Umschreibung (German for paraphrase or euphemism, the interactive installation is an “impossible” continuous staircase, reminiscent of the Penrose stairs, created in 1958 by a mathematician of the same name.

There are two Bramante staircases in the Vatican Museums in Italy but only the newer (1932) one is generally open to the public. The original, a revolutionary piece of architecture, was built in 1515 and connected the palace with street level, and is now only accessible on special tours. The double helix was designed so that animals and people could ascend and descend without interruption. The modern version, designed by Giuseppe Momo, inspired by the original, allows two separate streams of people to exit. 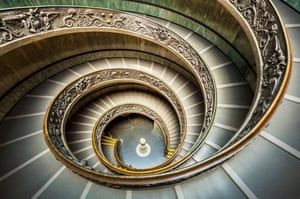 Vertigo sufferers are advised to avoid China’s “stairway to heaven” – a dizzyingly high spiral staircase in the Taihang mountains, in Henan province. It is meant to offer the thrill of mountaineering without the danger of a climbing up the rock face itself. Visitors have to sign a consent form before climbing the 91 metres, and must be healthy and under the age of 60.

For a much smaller spiral, 19th-century Peles Castle in Romania has an intricately carved wooden staircase inside the elaborately designed royal residence. Other decorative staircases come in all kinds of colours and styles: from the highly photogenic, minimalist block colours of La Muralla Roja housing project on the cliffs of Calpe near Alicante in Spain, designed by architect Ricardo Bofill in 1973; to the Santa Maria del Monte staircase in Caltagirone, Sicily – a flight of 142 steps built in 1604 with hand-painted ceramic tiles added to the risers in the 1950s.

There are also several painted piano staircases around the world, from Valparaiso in Chile to Beirut in Lebanon. Some even add a musical note to each step you take, such as the permanent interactive musical staircase in San Francisco, installed in 2013. Leading up to shopping centre Pier 39, it was created by designer-inventor Remo Saraceni, who was also behind the musical piano floor in the Tom Hanks film Big. 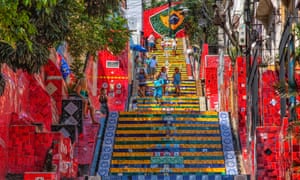 Chilean artist Jorge Selarón started a mosaic project in 1990 on the dilapidated steps outside his home in Rio de Janeiro. He eventually covered all 215 steps of the Escadaria Selarón in discarded broken tiles, ceramics and mirrors, later adding pieces sent by friends and fans all over the world. Mystery still surrounds his death in 2013; his body was found on the very steps he had transformed over two decades.