Ropes whizz through pulleys as each sail unfurls and catches the wind, the engine noise stops and the ship gathers speed, dashing through the waves.

There is nothing at sea so romantic as a voyage under sail on a tall ship, and when it is the largest square-rig sailing vessel in the world it is even more uplifting.

This is the inaugural cruise aboard Golden Horizon and thanks to a week of glorious July weather, sailing along the South Coast of England with scorching sun and light sea breezes, when out of sight of land it felt as if we could be in the Caribbean. 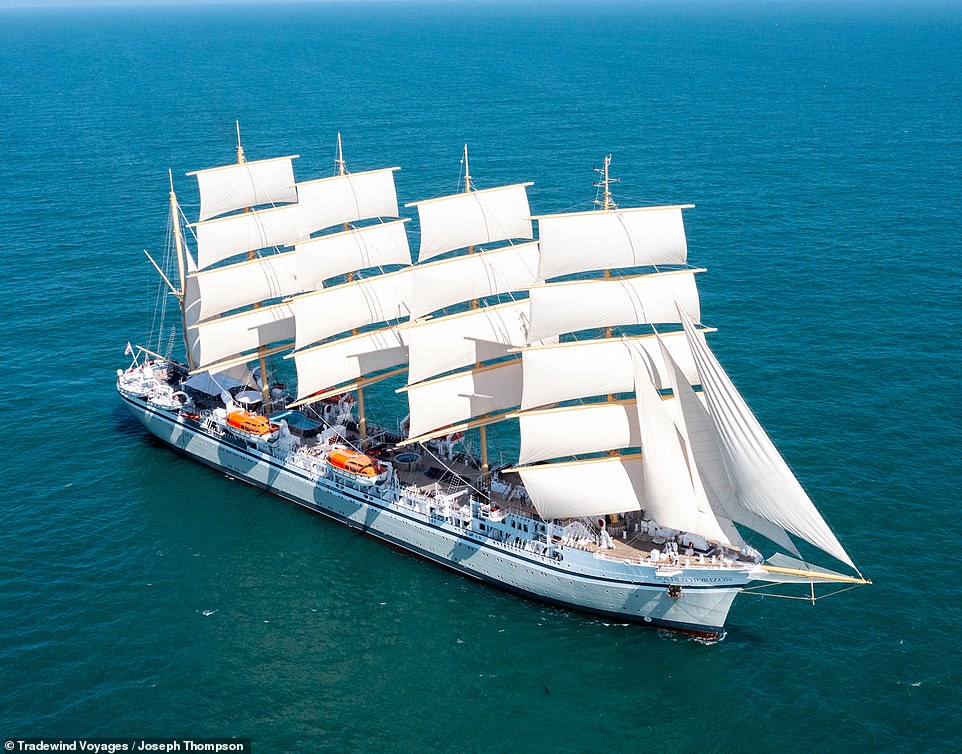 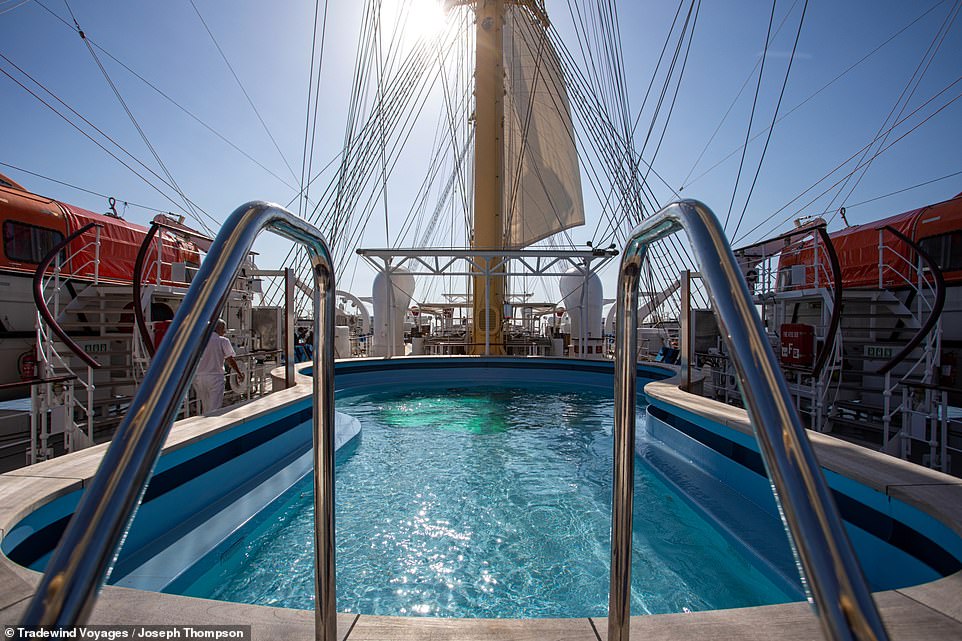 Golden Horizon’s main swimming pool. There is also a plunge pool at one end, and a round, 14ft-deep pool for one-to-one scuba-diving lessons at the other

With five soaring masts and 35 sails that would cover a whole football pitch, the ship is certainly a head-turner, with dog-walkers waving from cliff paths, and sightseeing boats coming alongside for a closer look.

At early-morning yoga on deck before it got too hot, looking up from my mat the view was gorgeous: clotted-cream-coloured triangles and oblongs and shiny yellow masts against a perfectly blue sky.

Golden Horizon is one of a handful of cruise ships with traditional, hard-working sails and is a larger replica of another largest-ever sailing ship of its day, France II, built in 1913, for cargo. And, remarkably, this new ship can go faster under sail – 17 knots – than its top speed of 16 knots by engine power alone.

A new Suffolk-based cruise line, Tradewind Voyages (tradewindvoyages.com), has plans for four more ships like Golden Horizon, and is plotting its voyages to make the most of prevailing winds and currents, following the sun and historic trading routes from Indonesia and the Indian Ocean to the Caribbean and South Pacific. 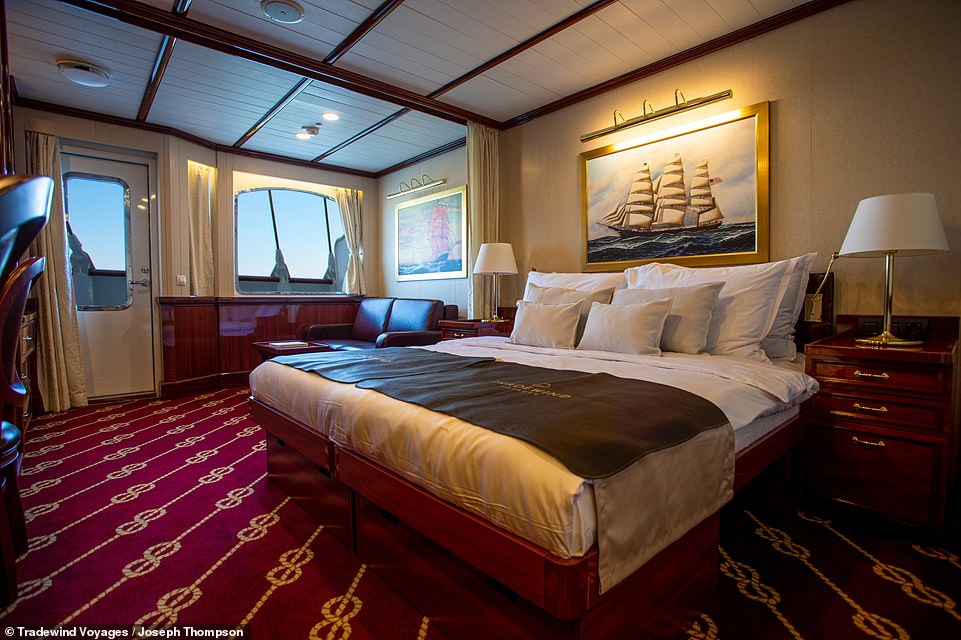 ‘A handful [of rooms] have discreet balconies that do not interrupt its elegant profile,’ Caroline says. Pictured is one such deluxe room 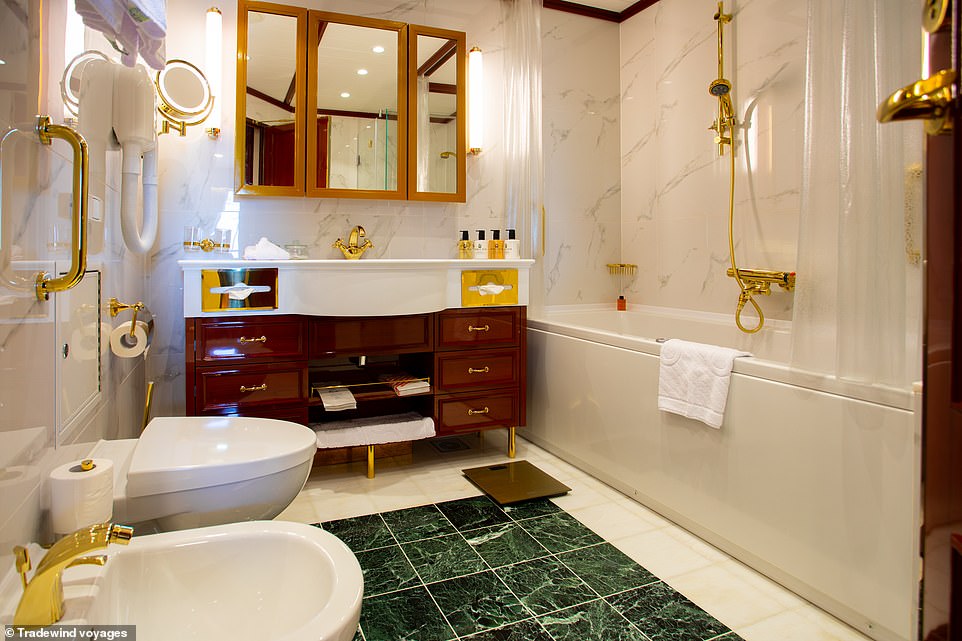 The Golden Horizon boasts four guest decks and has 140 cabins and suites, some with luxury bathrooms (pictured) 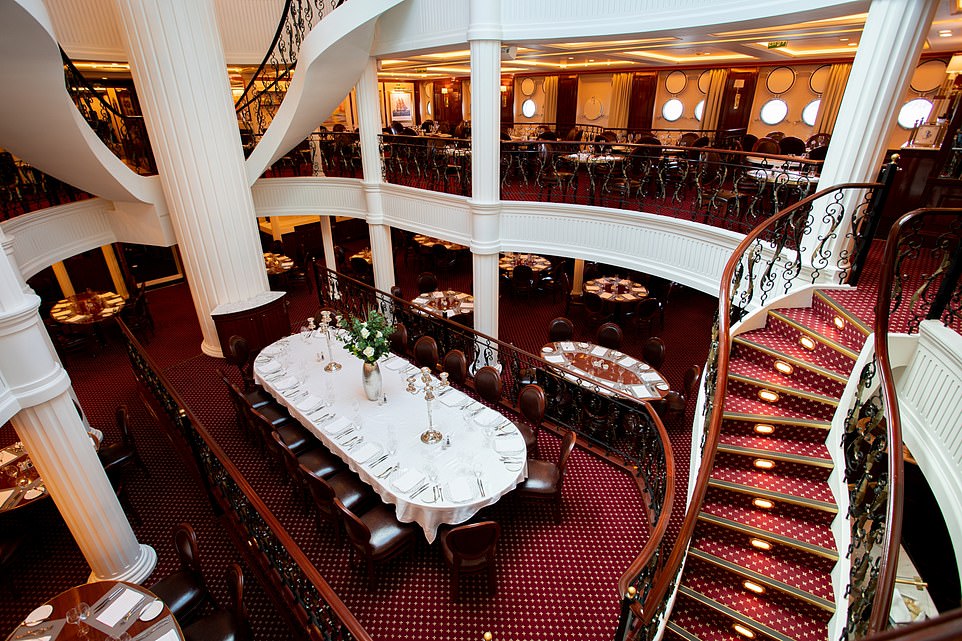 On sea days, when Golden Horizon is well away from shipping traffic, passengers can channel their inner James Onedin at the ship’s wheel on the Compass Deck, and have the exhilarating experience of helming in full sail.

A number of guests on this voyage – in peaked caps and with grey beards, long shorts and deck shoes – came from sailing rather than cruise holiday backgrounds, having skippered their own yachts in their salad days, and were keen to observe the workings of the sails and quiz the crew.

One passenger spoke for many of us when she looked up from her book and remarked: ‘When you read the brochures you think you would love to get hands-on, helping sail the ship, but actually it’s much nicer not having to.’

But nervous sailors beware: when the weather gets frisky, tall ships really let you know you are at sea, so bring Dramamine – a medicine to help you cope with motion-sickness – and ginger boiled sweets (a more traditional treatment), and hope you won’t need them.

Magnificent Golden Horizon, with four guest decks, has 140 cabins and suites. A handful have discreet balconies that do not interrupt its elegant profile, but most have two portholes that do not open. Plenty of stairs and no lifts mean your calves will get a workout, unless you stay put on a sunbed.

The two-deck-high dining room and piano bar wrapped around the atrium have natural light flooding in through the glass-bottom swimming pool that also has windows in its sides. Shy swimmers soon learn to avoid taking a dip at meal times – though watching those who do stay in can be quite a diversion if small-talk dries up during the afternoon tea hour. 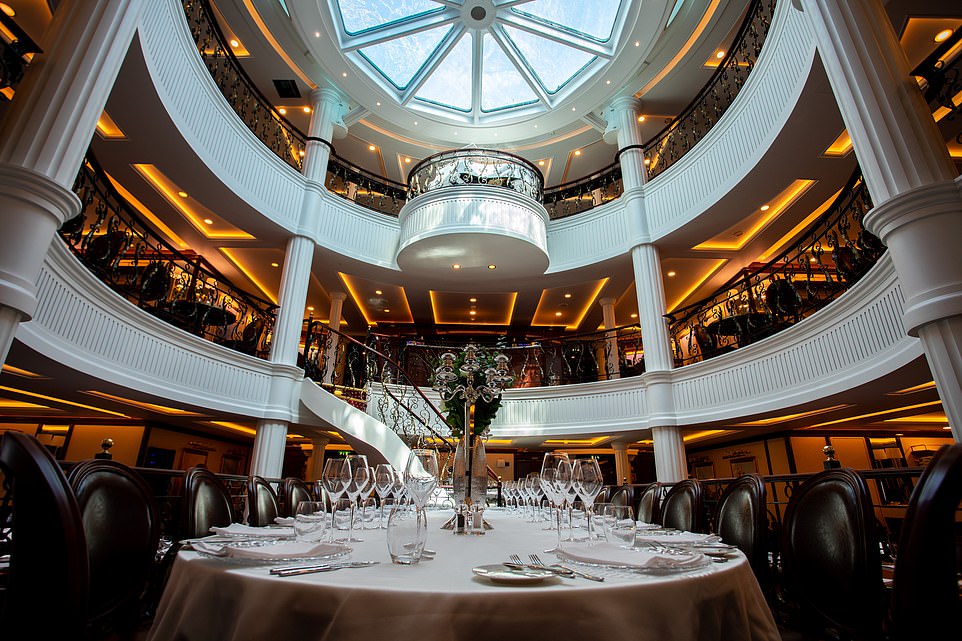 Caroline writes: ‘A number of guests on this voyage – in peaked caps and with grey beards, long shorts and deck shoes – came from sailing rather than cruise holiday backgrounds, having skippered their own yachts in their salad days, and were keen to observe the workings of the sails and quiz the crew’ 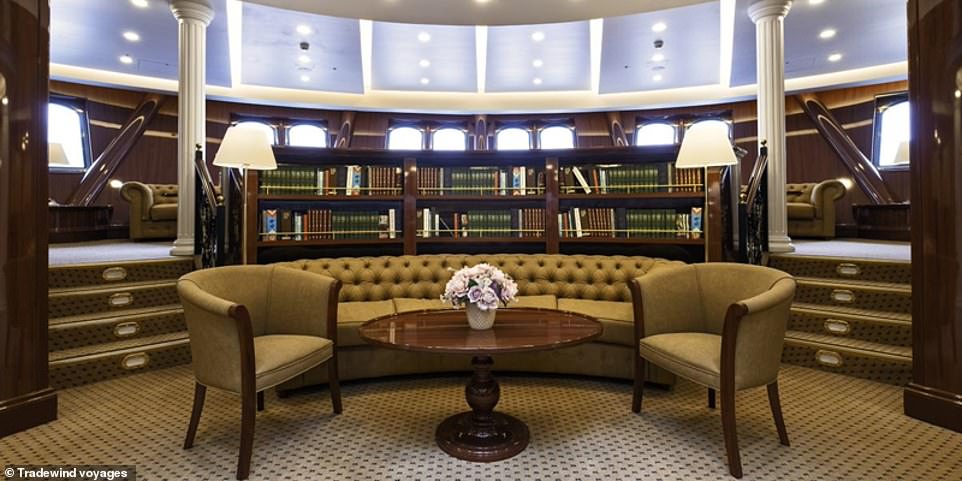 The write stuff: ‘Down below there is a cosy library,’ Caroline reveals, though she points out that the ‘focus is very much on deck during the day’ 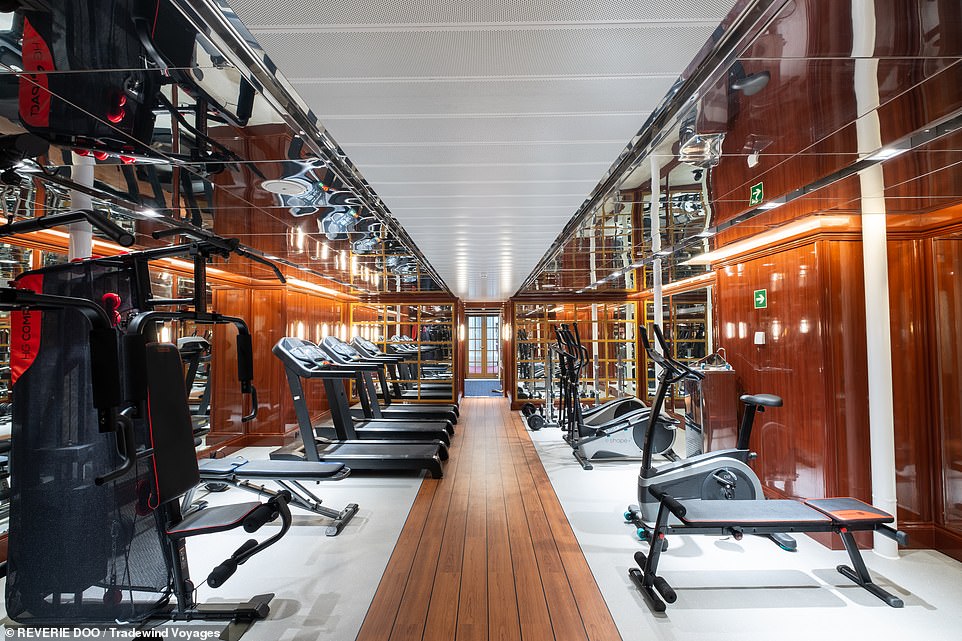 One of the amenities on the ship is a small gym (pictured), fitted with treadmills, exercise bikes and weight machines

Apart from room service, the only other place to eat is the open-air Horizon Grill, where a variety of burgers is served.

On deck there is also a plunge pool (reassuringly, lined in opaque material) at one end, and a round, 14ft-deep pool for one-to-one scuba-diving lessons at the other. This is like a large glass vase set into the back of the lecture hall on the deck below, with curtains that can be drawn round it to prevent distracting the audience’s attention should a talk on nautical history be held at the same time.

The focus is very much on deck during the day, with traditional games such as quoits and deck curling, and a jovial buzz around the Pool Bar. But down below there is a cosy library, whisky bar, small gym, hair salon, and spa with treatment rooms, sauna and a Turkish bath. 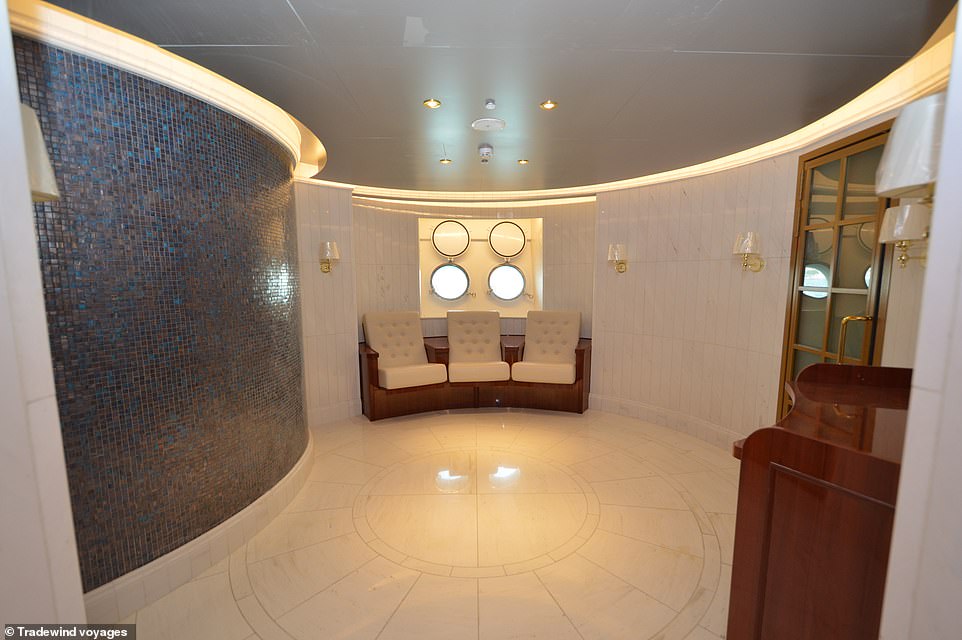 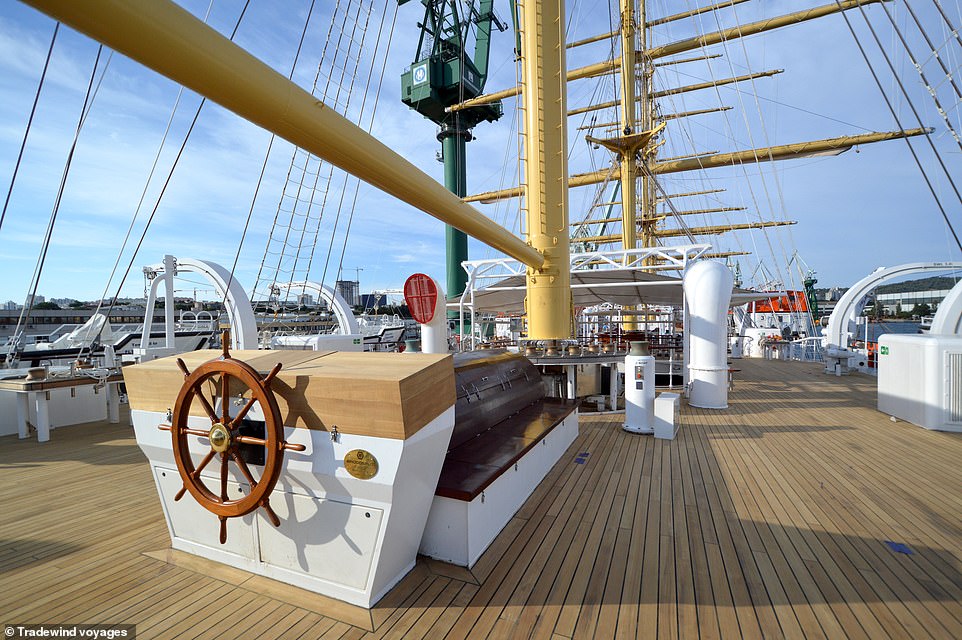 ‘There is nothing at sea so romantic as a voyage under sail on a tall ship,’ enthuses Caroline. This picture show’s Golden Horizon’s deck

When the ship is at anchor and sea conditions are right, the water-sports marina folds down at the back of the ship. Borrow a paddle board or snorkel, hire a sea bob or go for a swim. Or just go down to the marina and connect with the ocean. There is something magical about standing on the platform a couple of feet above the water, watching for marine life.

The marina will come into its own in the warm, sheltered waters of the Caribbean, where Golden Horizon will be heading in mid-November for its first winter season, with one-week cruises from £1,799pp.

Golden Horizon is sure to be in demand, given the popularity of cruises under canvas offered by other operators…

STARS OF THE OCEAN

Golden Horizon was commissioned by Star Clippers, a favourite with lovers of luxury holidays at sea for 30 years, but the company decided not to expand its fleet of three sailing cruisers after all.

Its flagship is majestic Royal Clipper, the line’s five-masted square-rigger which carries 227 passengers under 42 billowing white sails. Twin sister ships Star Clipper and Star Flyer are smaller – yet taller – with four masts and capacity for 166 guests each. 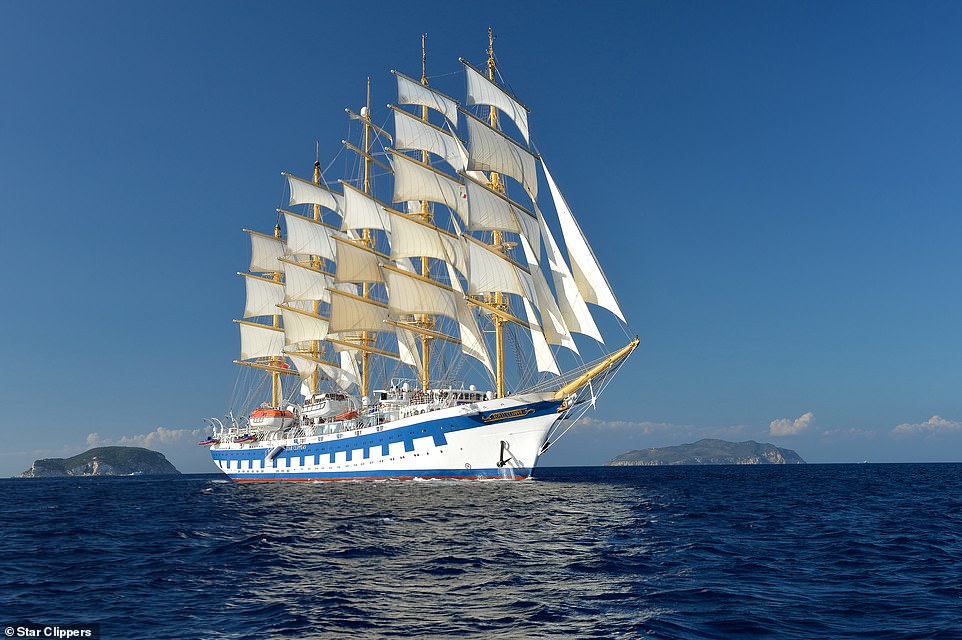 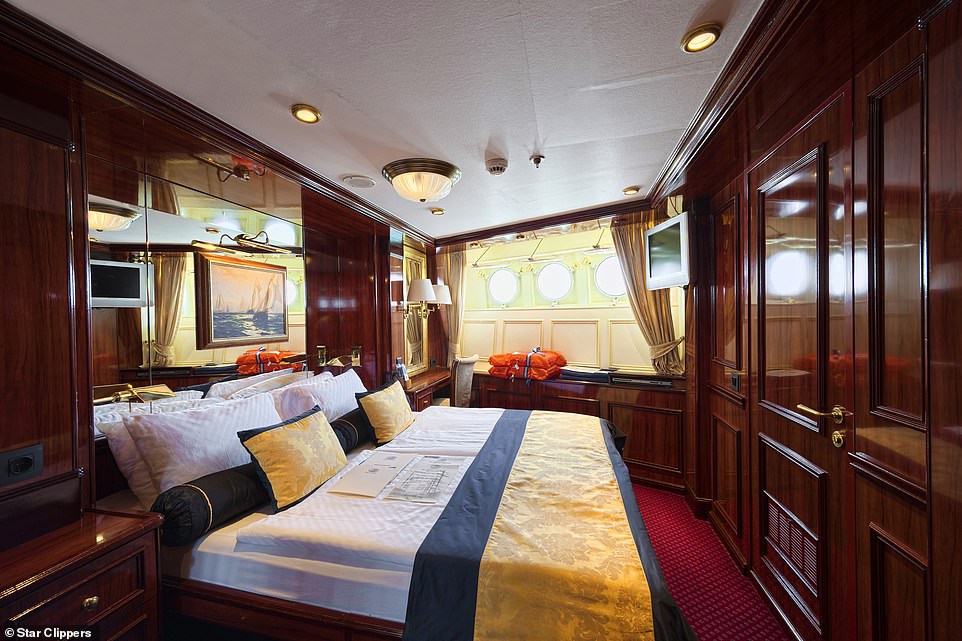 Pictured is a suite aboard the Royal Clipper, which will be sailing in the Caribbean this winter 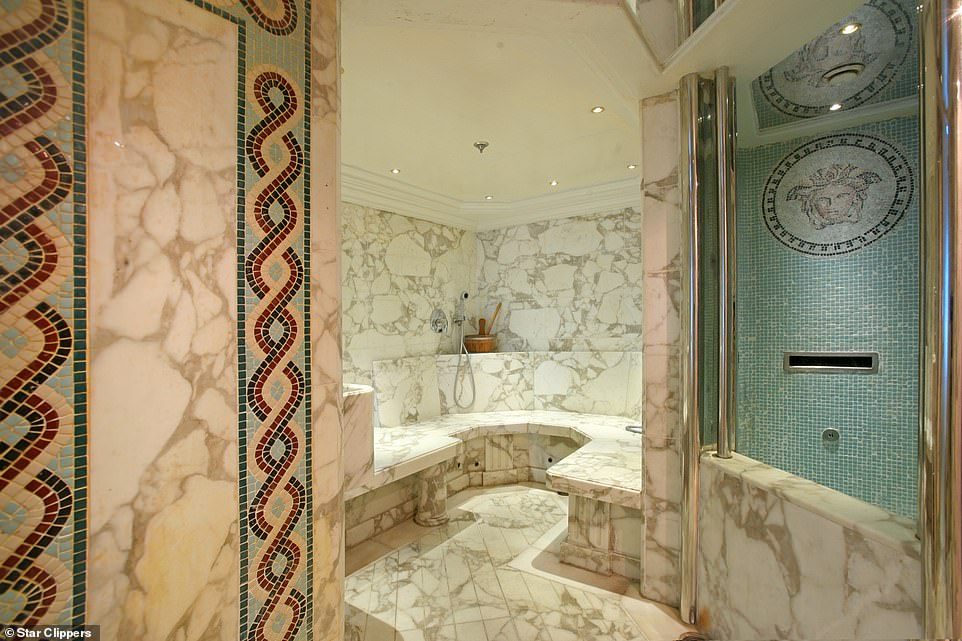 Caroline says Star Clippers has been a ‘favourite with lovers of luxury holidays at sea for 30 years’. Pictured is the sauna aboard the Royal Clipper 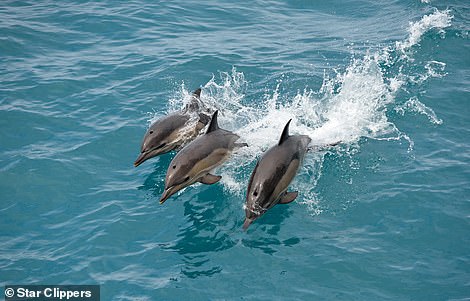 On all three ships you can lie back on a sunbed and watch the crew at work, or have a go at heave-ho yourself, hauling ropes to help set the sails. If you have a head for heights, race up the rigging like a cabin boy sent to look out for land and see the view from a platform 50ft up the main mast. For a close encounter with the sea, you can sprawl in a net spread below the bowsprit, and taste the tang of salty spray, watching flying fish and leaping dolphins.

Royal Clipper and Star Flyer will be sailing in the Caribbean this winter, and Star Clipper will be in South-East Asia with prices from £1,165pp for six nights. More details at starclippers.co.uk. 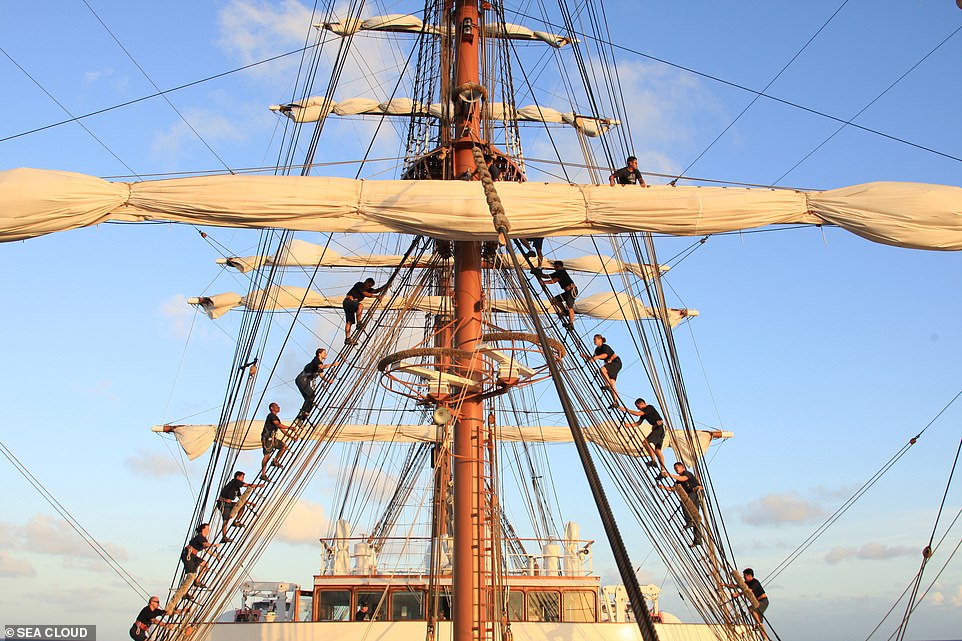 The crew of Sea Cloud II check the rigging. The sails on the ship – which features ‘country-house-style suites’ – are set by hand

Three more tall ships for an authentic sailing experience, with all the comforts of a luxury cruise, are vintage Sea Cloud and two smaller, specially-built, three-mast barques, Sea Cloud II and Sea Cloud Spirit for the German-owned line (seacloud.com).

Sea Cloud is a grande dame of 90, built for an American heiress in 1931 as her private yacht, and now has 32 opulent cabins, adorned with marble fireplaces and bathrooms with golden swan taps.

The ship is popular with German-speaking passengers, but the daily programme and menus are in English too.

On Sea Cloud II, whose sails are all set by hand, there are 65 crew to a maximum of 94 passengers. There is quite a contrast between the very nautical atmosphere on deck and the country-house-style suites below, with canopied beds, sofas and reproduction antique furniture. The ship is chartered privately much of the time, so the best way to get on board is to book a cruise with Noble Caledonia (noble-caledonia.co.uk), which organises cultural tours led by experts.

Two-week cruises next February in the Caribbean visit islands untouched by mass tourism, and included excursions investigate piracy and naval activities in the West Indies in the 17th and 18th Centuries. Next June, eight-night cruises explore the ancient history of the Mediterranean, from £5,395pp.

Not all ships with sails pride themselves on using old-fashioned ropes. When the captains of Wind Surf, Wind Star and Wind Spirit wish to unfurl the sails, as they aim to do whenever the ships leave port, all they have to do is turn a few knobs on the bridge. Even the most seasoned cruisers are moved to tears as each sail opens in time to the rousing music of Vangelis’s 1492: Conquest Of Paradise.

Choose a cabin on Deck 1 to feel a closer connection to the ocean aboard Wind Star or Wind Spirit. There is nothing like watching the waves slapping against the portholes with one eye while watching a video of Finding Nemo with the other in a Force 7 near-gale.

Wind Surf, for 342 passengers, will be in the Caribbean this winter, while 148-passenger Wind Spirit and Wind Star will sail through South-East Asia and along the Pacific coast of Costa Rica respectively (windstarcruises.com), with one-week cruises starting at US$2,299pp.

A SHIP FOR THE CHIC 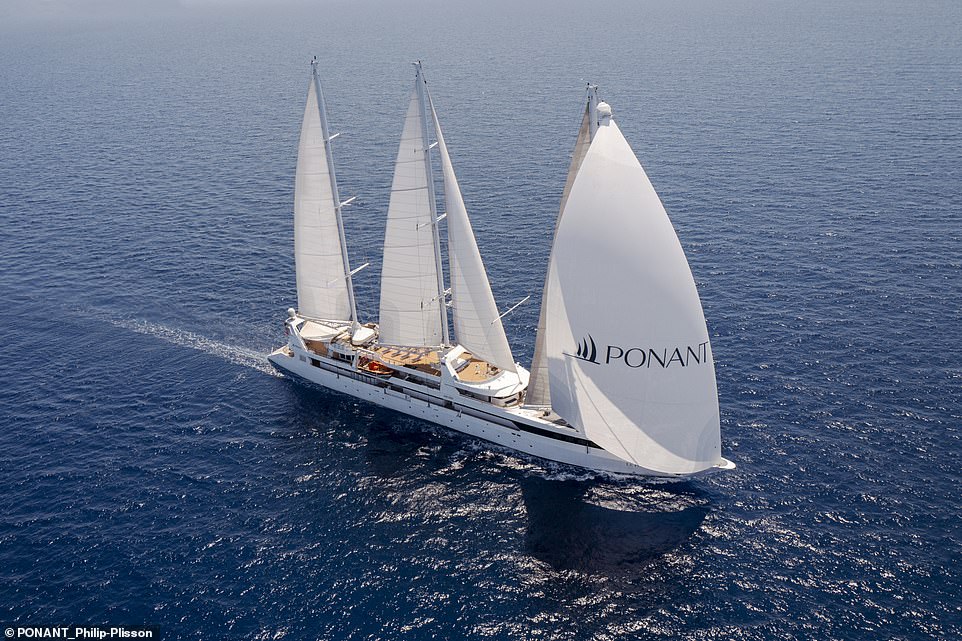 Le Ponant, pictured above, has computer-operated sails and ‘spacious’ suites, according to Caroline 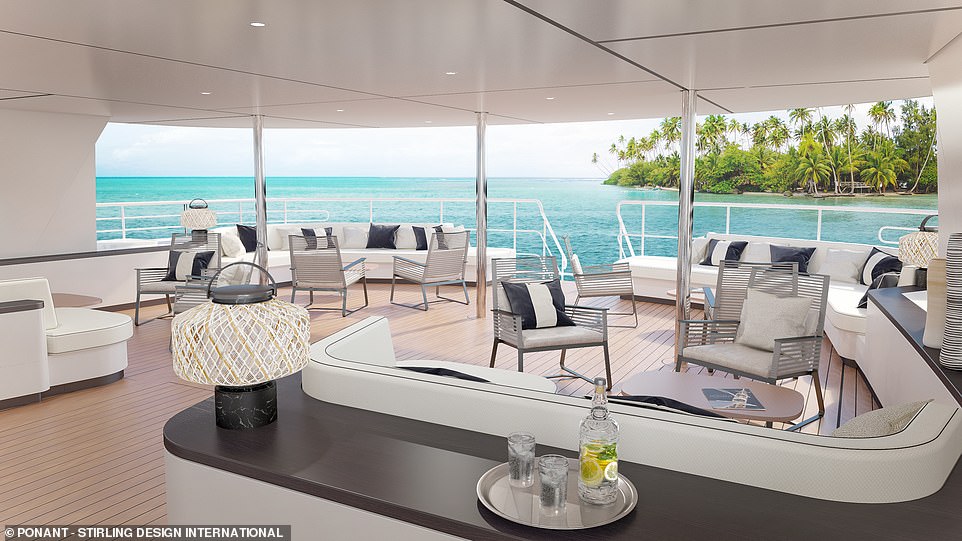 For another hands-off experience that still gives a delicious frisson of life under sail, choose sleek Le Ponant (uk.ponant.com), which has computer-operated sails.

Pack stripy Breton tops and espadrilles (think Coco Chanel and Pablo Picasso on their hols) and you’ll blend in with your Gallic shipmates on this swish French ship.

A prow-to-stern revamp is halving the number and almost doubling the size of the cabins, so 34 crew look after just 32 guests. Suites are spacious and saloons chicly decorated in warm wood and cream leather with dashes of navy. The ship blends in perfectly with the super-yachts plying the French and Italian Rivieras and dropping anchor in Corsica’s hidden coves. Fares will start at €10,000pp.