ONBOARD THE ODYSSEY OF THE SEAS — It seems fitting that an athlete facing life-changing struggles would become the godmother of a cruise ship that also faced its own set of difficulties during the pandemic.

And on Nov. 13, that’s what happened aboard Royal Caribbean International’s newest ship, the Odyssey of the Seas, when Bahamian paratriathlete Erin Brown was given the distinction. Brown was diagnosed with a rare form of bone cancer and made the decision to have one of her legs amputated above the knee.

“When we set out to find a godmother for Odyssey of the Seas, the ship whose name and journey represent the perseverance we’ve all shown, Erin Brown was a natural choice,” said Royal Caribbean CEO Michael Bayley during the ship-naming ceremony at Port Everglades in Fort Lauderdale.

The pandemic altered the Odyssey’s launch, originally scheduled to be in Italy, then moved to Israel, then again to Fort Lauderdale. Once there, the ship’s inaugural sailing was delayed for nearly a month after eight crew members tested positive for Covid-19 in June.

“In this past year the word ‘odyssey’ has become more than the name of this ship,” Bayley said. “It represents the odyssey we’ve experienced as a cruise line and as an industry.” 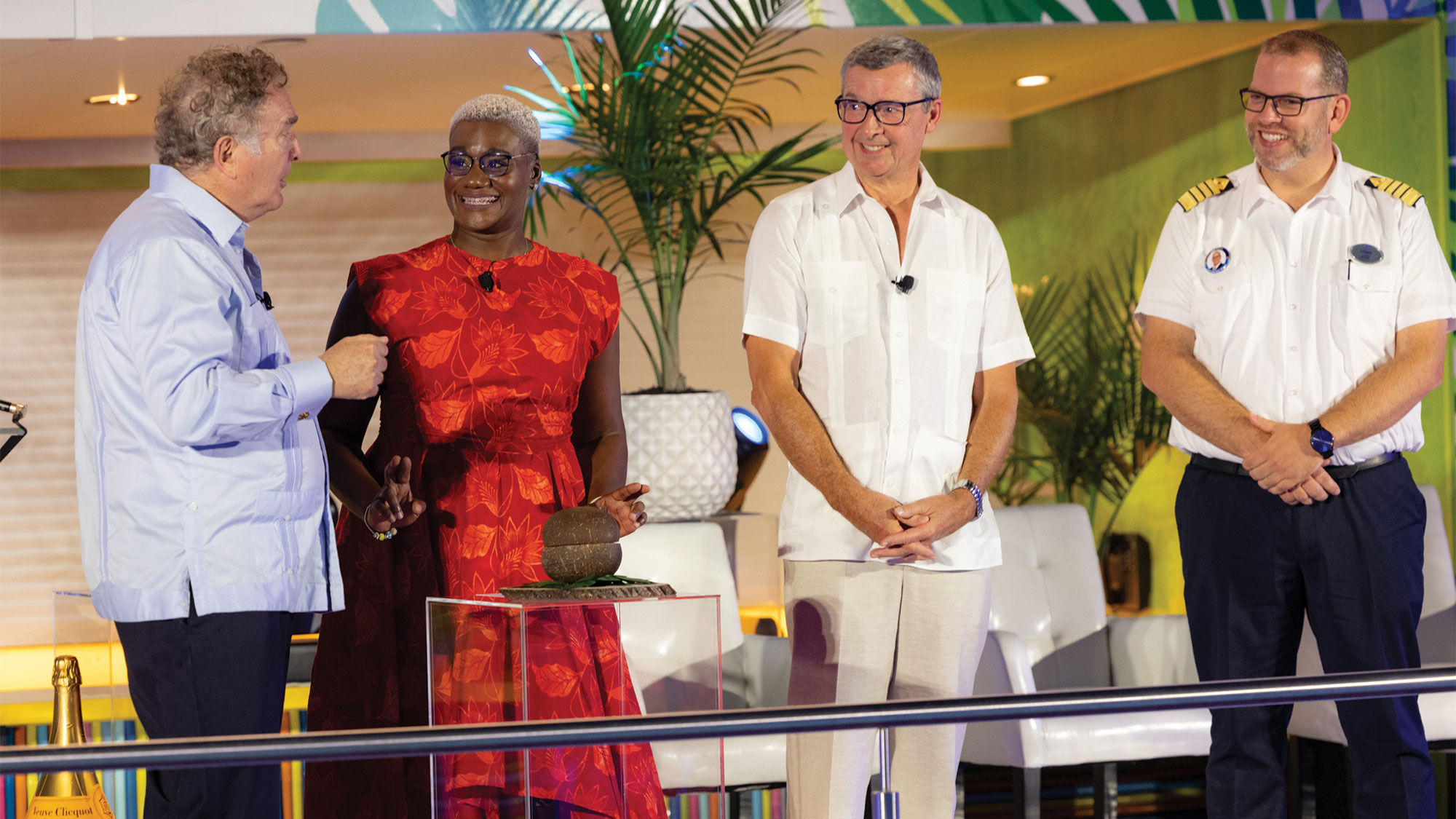 The 4,198-passenger Odyssey has 25-plus restaurants and bars, including seven specialty eateries that run the gamut from Asian (Izumi, Teppanyaki) to upscale (Chops Grille, Coastal Kitchen). The Windjammer Marketplace, a staple of Royal Caribbean dining, continues to serve its complimentary buffet. For now, as a precaution, diners do not self-serve but instead are served by crew. 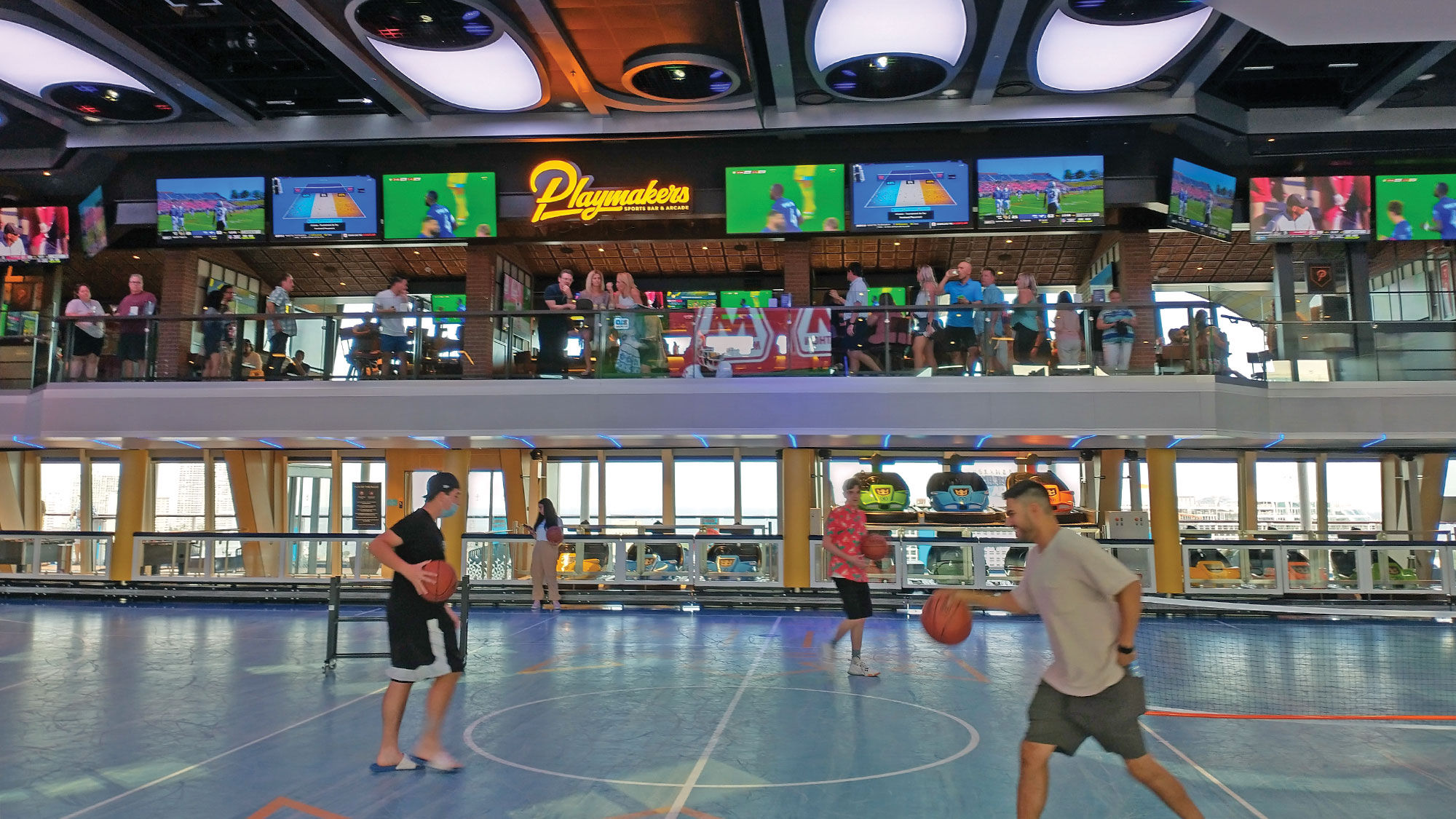 While the term “ultra” may be a misnomer in terms of the ship size, it fits in terms of onboard activities and the latest technology.

Loyal Royal cruisers will enjoy the Odyssey’s familiar amenities, such as the bungee-trampoline Sky Pad, skydiving simulator RipCord by iFLY and the SeaPlex area, which includes a basketball court, bumper cars, virtual reality games, pingpong, roller skating and more. Also on the ship is a rock-climbing wall and the North Star lift that takes guests up 300 feet for 360-degree aerial views. 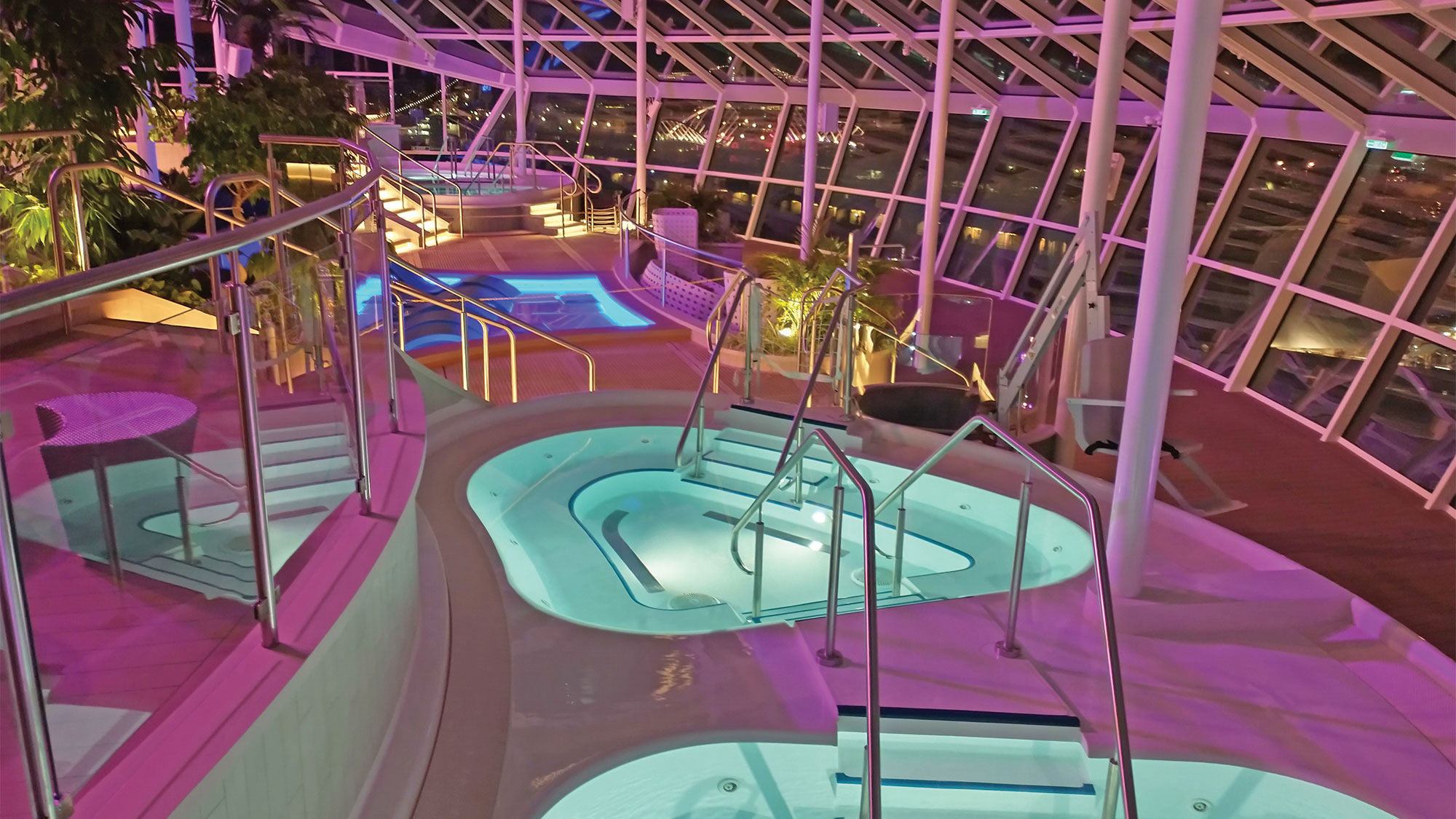 The Odyssey, like other Quantum-class ships, showcases state-of-the-art technology in its Two70 theater, which incorporates six high-definition screens rotated by robotic arms. Behind the eight-foot tall monitors is a 135-foot-wide, two-story video screen with a viewing angle of 270-degrees via 18, 12K-resolution projectors. (The screen is really the ship’s aft windows covered with projector screening during shows.)

While robot arms move screens, robotic bartenders serve and mix cocktails at the two-story Royal Esplanade, home to a variety of shopping, dining and entertainment options. Among them is the Music Hall, a venue that showcases live bands, karaoke and DJs spinning music.

The nearby Boleros serves up Cuban and Brazilian beverages while hosting live Latin, jazz and other music styles. Steps away, the Crown & Compass Pub offers bar bites and acoustic performances. The nautically themed Schooner Bar hosts piano performances and singalongs. The menu of specialty restaurant Wonderland, which hints at Alice in Wonderland, steers not toward individual dishes but, rather, food themes (Earth, Sea, Fire, Ice and Sun).

For guests 16 and older, the Solarium, at the front of the Odyssey, is a glass-walled rooftop area with hot tubs and a multilevel, two-foot-deep pool meant more for cooling off than swimming. Overall, the Solarium is a place to unwind.

The Odyssey will sail six- and eight-day cruises across the Caribbean until early summer, when it will relocate to Civitavecchia (Rome) to start a series of Mediterranean sailings through fall 2022.