Google Maps Street View often catches people around the world in some rather unexpected situations. Sometimes these are scenarios created by the people caught on camera for comic effect.

Other times, they are snapped by Google’s cameras completely randomly.

Recently, one “romantic” moment unfolding between a man and woman surprised viewers.

They were so taken aback, one user decided to share the scene in a Reddit forum dedicated to unexpected “Google Maps shenanigans”.

In the scene, a white truck can be seen driving down a road in Puente Tolosita. 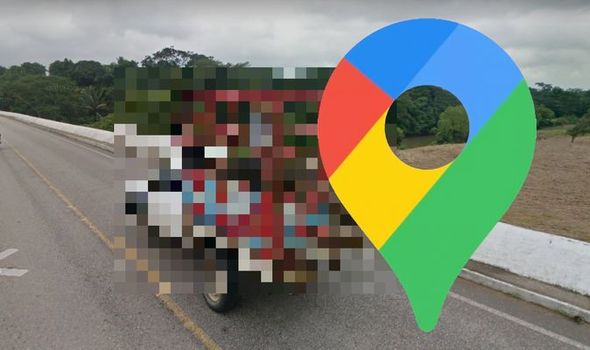 Sticking out of an open window appears to be the arm of the driver, suggesting they have not noticed anything out of the ordinary about this drive.

The white vehicle is open-backed, with a special metal compartment that is typically used for carrying cattle or crops.

However, it is not animals or bales of hay that are being carried in the back of the truck.

Instead, a man and woman can be seen standing up in the compartment while the vehicle is moving.

The man, in a blue T-shirt and grey jeans, is holding on to the red metal bars above his head.

He does not look as though is there against his will and instead holds a rather casual stance.

A female stands opposite him, leaning against the red metal bars with one arm resting beside her.

While the couple’s faces are blurred to protect their privacy, they both appear to be grinning as they look toward the Google cameras direction. 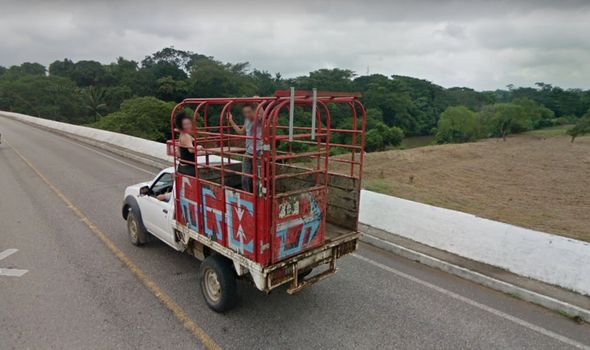 Perhaps they have spotted the Google car, which carries the special 3D camera, as it zooms by.

Or maybe they are simply enjoying this somewhat bizarre drive.

That is certainly what the Reddit user who came across the scene seems to believe.

They described the moment as “a romantic date in Mexico.”

However, one Reddit user chimed in to shed some light on what they think could be occurring.

“As someone who was there literally last month it’s only illegal for the driver to be unbuckled,” they wrote.

“This is common and usually features about eight people in the back there.

“This is just normal Mexican transportation.”