Google Maps Street View is a handy tool to help travellers map their way around the world. The online application uses 3D cameras, typically attached to the top of special cars, which then drive around cities and towns snapping photographs.

Along the way, Google’s cameras often spot some rather unexpected moments.

At times, these scenes are ones which the people involved may have hoped would not be caught on camera.

However, at other times, they are purposely set up by locals to create a funny prank to be immortalised online.

Either way, these moments often catch the attention of Google Maps users.

Most recently, viewers were left shocked when they noticed one man’s rather bizarre appearance. 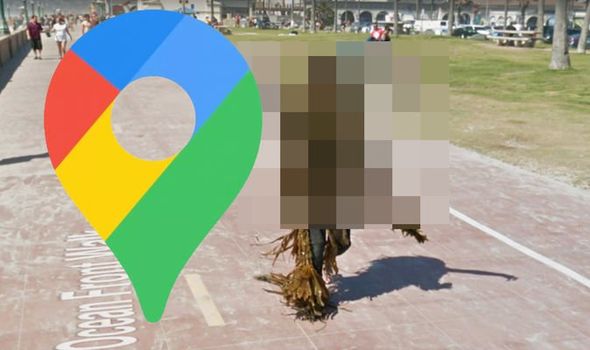 The scene unfolds on MissionPark Beach in San Diego, California.

It appears to be just a typical sunny day at the beach, with visitors walking along the boardwalk and enjoying picnics.

A grassy expanse to the right is filled with beachgoers, gathered in groups chatting or relaxing in the sun.

To the right is the sandy shoreline of the beach, where plenty of visitors are likely soaking up the sun or taking a dip in the ocean.

However, at the forefront of the image is a man whose appearance is something unlike anyone around him.

In fact, some of the Google Map’s viewers have likened him to a “swamp” monster.

Though the man’s face is actually hidden, it is what is on top of his head which has caused a stir.

It appears as though the man has great mounds of black and green seaweed growing from his head and tumbling down over his body. 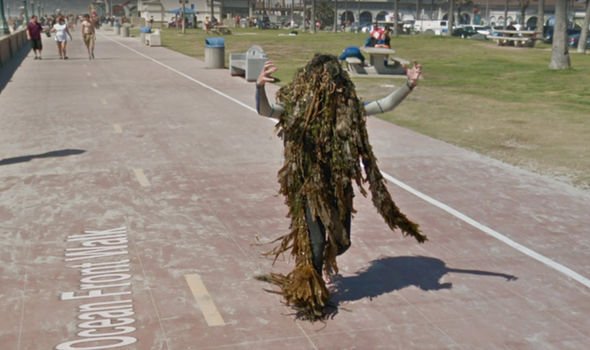 There is so much of this plantlike hair, it falls down way beyond his knees.

Only a pair of legs and arms can be seen, though it seems he is wearing a wetsuit.

His arms are outstretched towards the camera, giving the impression this monster-like being is running after it.

So what is the story behind this odd scene?

One Reddit commenter said: “Is that your new quarantine hairstyle?”

The likelihood is this is not a monster at all, but instead a beachgoer pulling a prank on the Google Maps camera.

Though the seaweed is likely real, it is probably a hair accessory rather than his actual hair.