Google Maps is typically used to help with geographical locations and directions. However, every now and then the online tool shows something rather unexpected.

One user was browsing the landscape of Alameda, in California, USA when they happened upon a rather devastating scene.

The map image, which they later posted to Reddit, shows the scene of a long stretch of runway poking out into Oakland Bay between San Francisco and Oakland.

In the centre of the beige tarmac appears to be the aftermath of an aircraft crash.

The commercial plane is snapped in two on the runway of an old naval base. 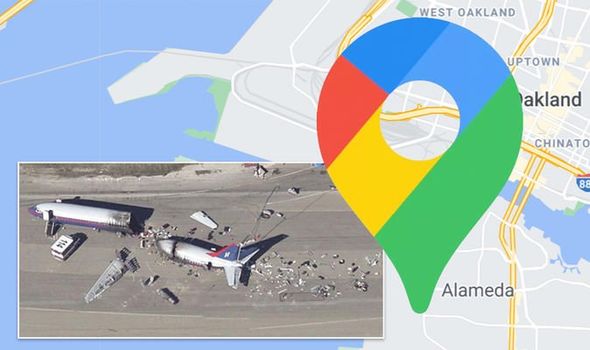 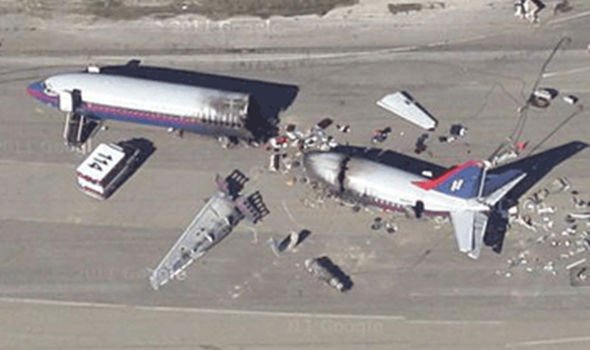 Dark marks which to be the remnants of a fire scar the broken areas.

The front half of the plane, metres from its rear end, has the door open with stairs leading down.

The second half of the aircraft appears to have more damage.

Either side of the huge vehicle are its wings, snapped off and fallen to the ground.

Surrounding the scene is an array of debris and what appears to be passenger luggage – presumably thrown from the hold upon impact.

It soon caught the attention of other users who chimed in to determine what exactly could have happened. 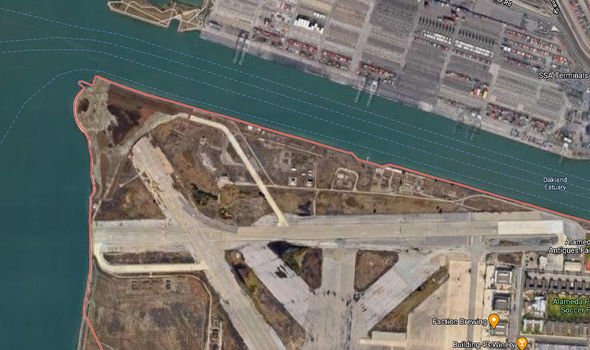 A second said: “Could be – no impact, skid or burn marks on the ground.”

However, they added: “The strewn luggage is an odd detail for a training site though.”

A third stated: “With all of those emergency vehicles lined up next to the crash scene, it is most likely a set-up for training.”

However, it seems all of the Reddit commenters were wrong.

Though the crash was perhaps not as worrying as it may first appear, it was not an emergency training practice.

Instead, a blogger from “GoogleMapsManina” revealed that the moment was, in fact, from a television series.

The NBC show Trauma was filmed in 2009 and depicted the moment an aircraft crashed upon landing.

It was discovered that this crash was actually a set for the television drama.

“They use the old Navy base in Alameda for all sorts of TV shows and movies,” commented a Reddit user following the revelation.

“For example, it’s where they built a 1/4 mile freeway for the second Matrix movie. First thing I thought of when I saw it was that it was staged.”