After a difficult year amid the coronavirus pandemic, the World Happiness Report for 2021 has been unveiled. For Britons eager to jet off on holiday in the future to a “happy” nation, or even expats looking to relocate, the report offers an insight into the highlights of certain countries around the world.

Though all nations have been impacted by the COVID-19 pandemic and varying levels of restrictions, it seems some citizens have fared more positively than others.

“The World Happiness Report 2021 focuses on the effects of COVID-19 and how people all over the world have fared,” researchers explained.

“Our aim was two-fold, first to focus on the effects of COVID-19 on the structure and quality of people’s lives, and second to describe and evaluate how governments all over the world have dealt with the pandemic.

“In particular, we try to explain why some countries have done so much better than others.” 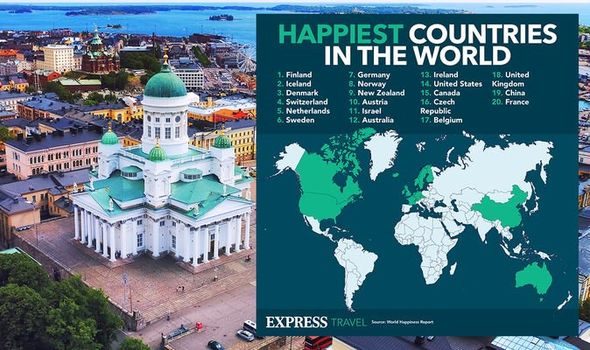 Despite the impact of coronavirus and a reported global decline in mental health, there has been no change to the top spot.

For the fourth year in a row, Finland has come out on top as the “happiest” county in the world.

It was followed by Iceland, Denmark, Switzerland and Netherlands, who took second, third, fourth and fifth place respectively.

The five other nations completing the top ten include Sweden, Germany, Norway, New Zealand and Austria.

However, it was bad news for the UK which plummeted six places in the happiness ranking, from 13 to 18.

Despite this, researchers found that UK emotions changed more than life satisfaction did throughout the year.

What’s more, while they noticeably hit a decline during lockdown, they were able to “recover faster” once the Government eased rules.

Mental health, in particular, has been a key factor in the UK’s ranking according to experts. 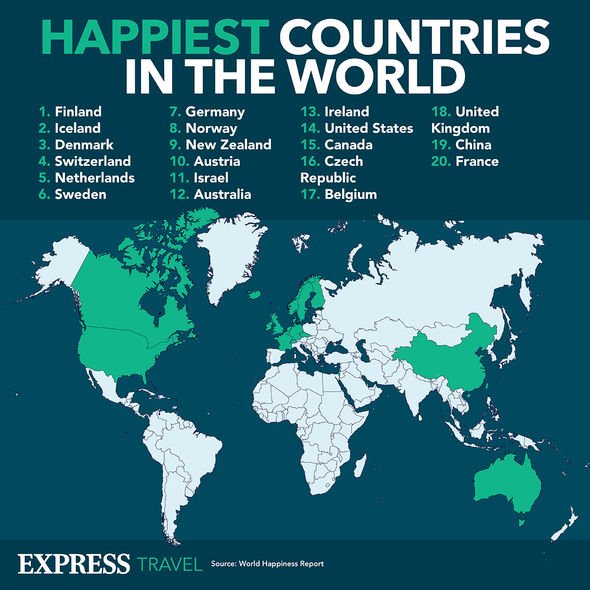 The report further explained: “In the UK, in May 2020, a general measure of mental health was 7.7 percent lower than predicted in the absence of the pandemic, and the number of mental health problems reported was 47 percent higher.

“But a significant proportion of people (22 percent in the UK) had mental health that was persistently and significantly lower than before COVID-19.”

The report was conducted differently this year, with more of a focus on the relationship between wellbeing and COVID-19.

In previous years, experts have based the report on levels of GDP, life expectancy, generosity, social support, freedom and corruption income.

Despite a change in focus, however, experts pointed out the top ten remained mostly the same with the exception of Iceland rising two places and Norway dropping from fifth to eighth place.

However, there was good news for Germany which sprung from 17th place to seventh.

There was also a positive leap for the US which, despite the pandemic, rose from 18th to 14th place.

Other nations which made it into the top 20 include Israel, Australia, Ireland, Canada, Czech Republic, Belgium, China and France.

The top 10 “happiest countries in the world” according to the Global Happiness Report 2021 are as follows: