Make your staycation more noteworthy: Iconic studio in Wales that features on the cover of Oasis’ debut single Supersonic now available as a holiday rental

Monnow Valley Studio, the iconic recording studio in Monmouthshire, Wales, that famously features on the cover of Oasis’ debut single Supersonic, is now available to rent.

Steeped in rock music history, the studio since it opened in 1975 has also hosted the likes of Queen, Black Sabbath, Stereophonics, The Charlatans, Manic Street Preachers, and Iggy Pop, among others. 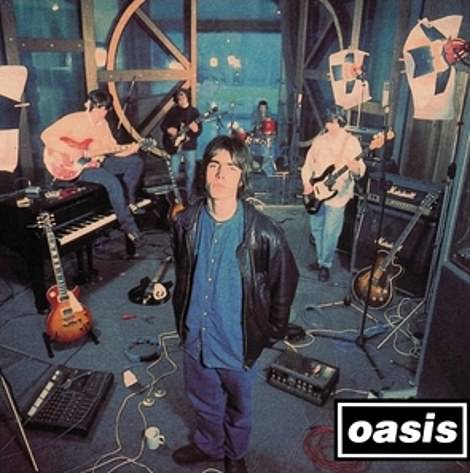 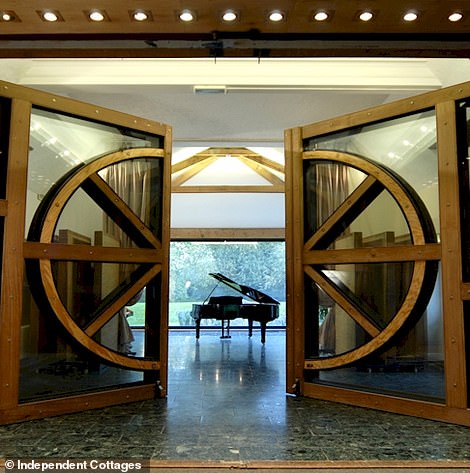 The recording studio famously features on the cover of Oasis’ smash-hit single Supersonic (pictured on the left). The 16ft-high wooden cartwheel doors that feature on the single cover are still in place (right)

Oasis booked the space in the autumn of 1993 to record their debut album, Definitely Maybe. Though the group didn’t use the material laid down there in the finished album, it’s where photographer Michael Spencer Jones captured the iconic image that announced Oasis’ arrival in the charts.

Discussing the shooting of the cover picture, Spencer Jones told Stop Crying Your Heart Out: ‘The idea was to have a cluttered studio environment with amps and cables strewn everywhere.

‘Liam was only 21 at the time and already looked like a fully-formed rock star, so I decided to have him at the front of the shot. I thought it would be a nice twist if I had my tungsten lights in view, the idea being to put Oasis firmly in the “spotlight” for their debut single.’

Supersonic was released in April 1994, the band having written and recorded the track in just one day at Liverpool’s The Pink Museum. 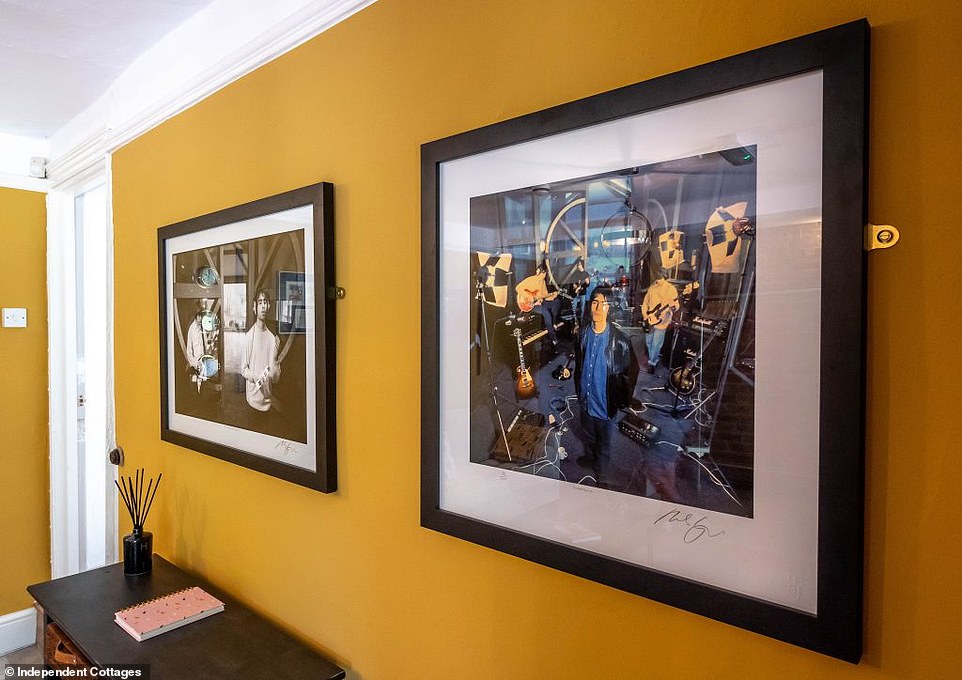 Framed photographs of the Oasis embellish the walls, with one showing the Gallagher brothers in the middle of a recording session 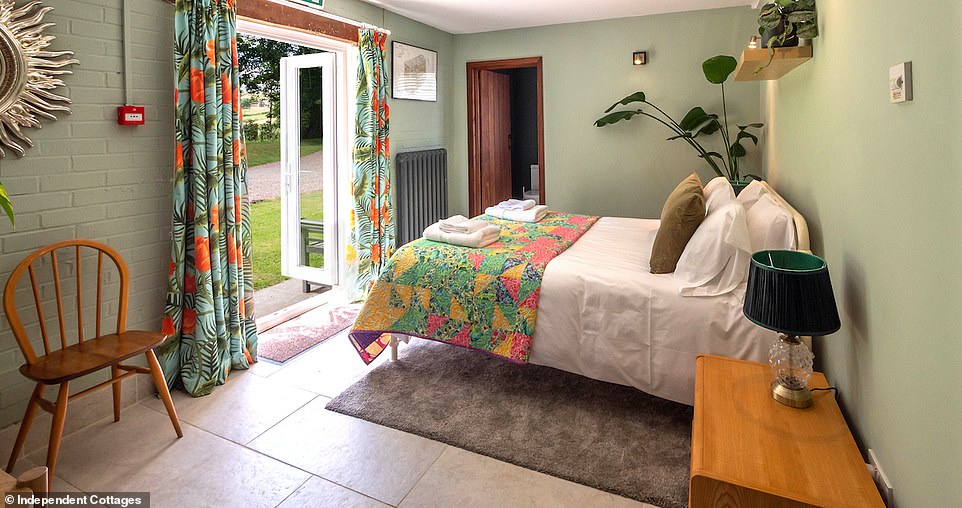 One of the 11 bedrooms in the self-catering property, which can host up to 26 holidaymakers 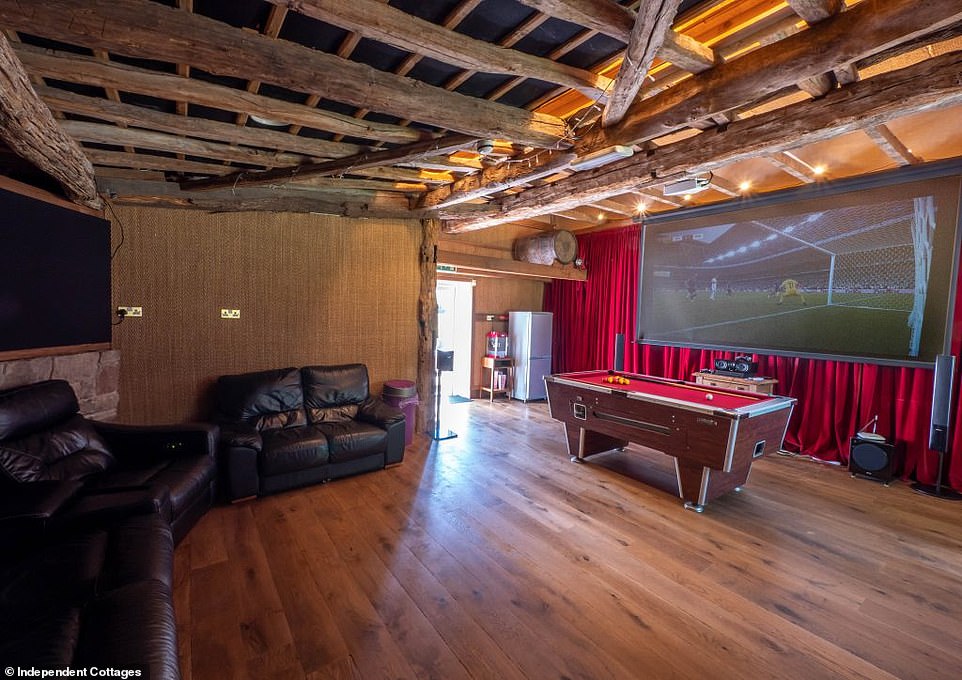 The property, which recently underwent a makeover, has a home cinema, a games room, a fully equipped kitchen and a soundproofed party room

The property, a 600-year-old mill house, still functions as a studio, but now up to 26 holidaymakers can spend the night there on a self-catering basis.

The newly refurbished property has 11 bedrooms and 10 bathrooms – six of which are en suite.

There is also a home cinema, a games room, a fully equipped kitchen and a soundproofed party room. 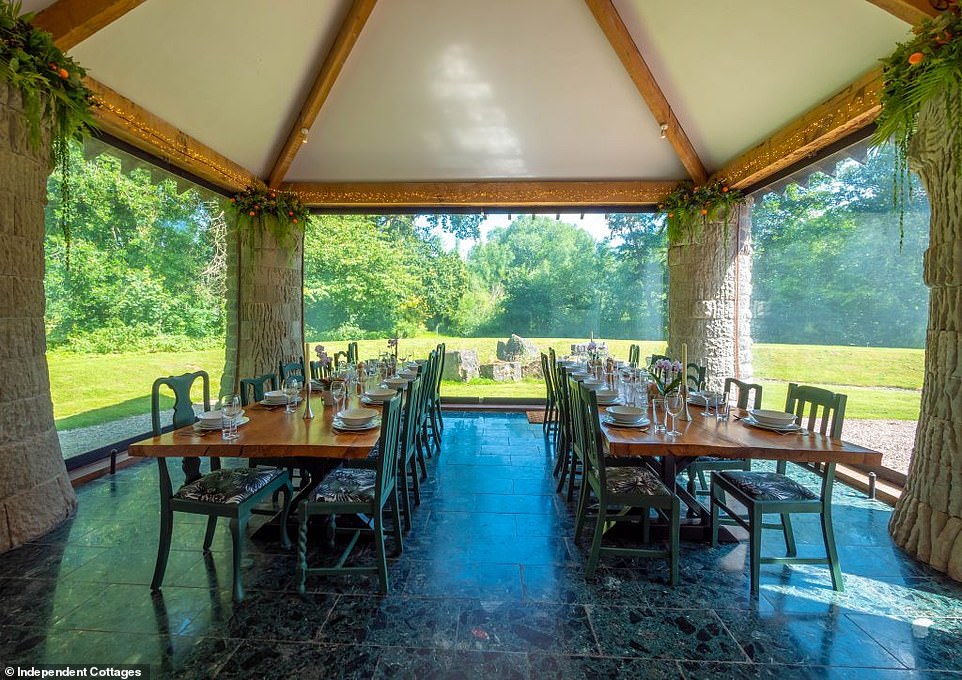 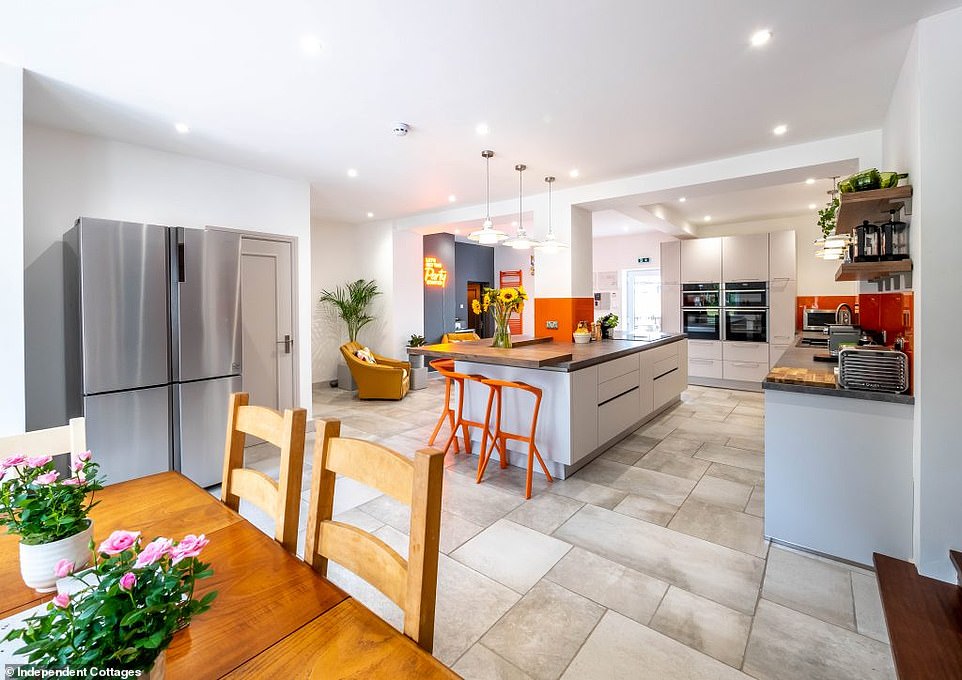 The fully equipped kitchen in the property, which is available to rent from £850 a night, with a minimum three-night stay 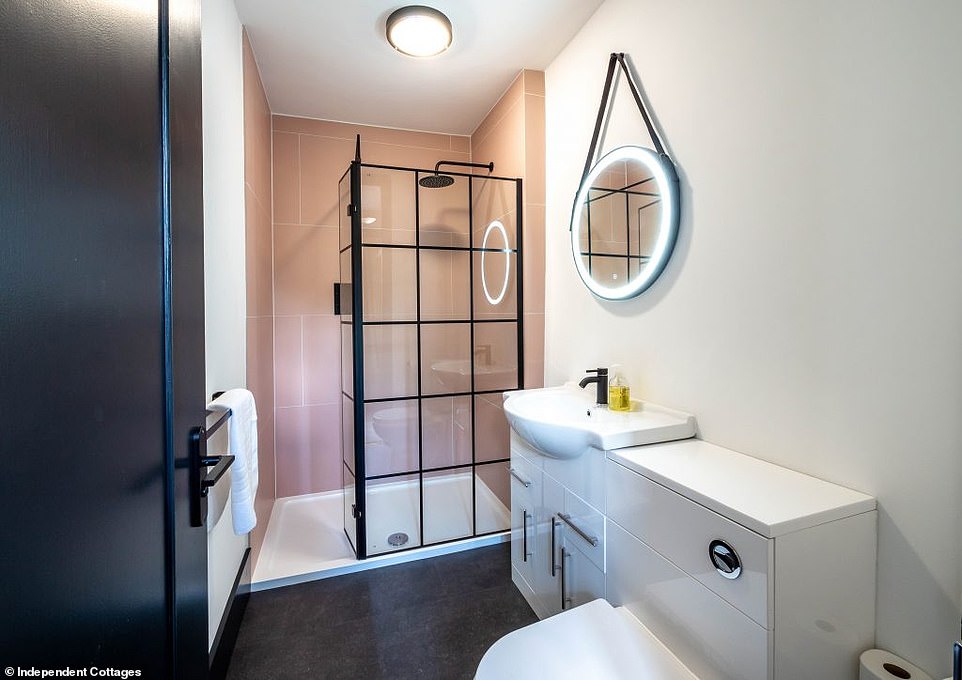 One of the 10 bathrooms in the historic riverside property. Six of the bathrooms are en suite 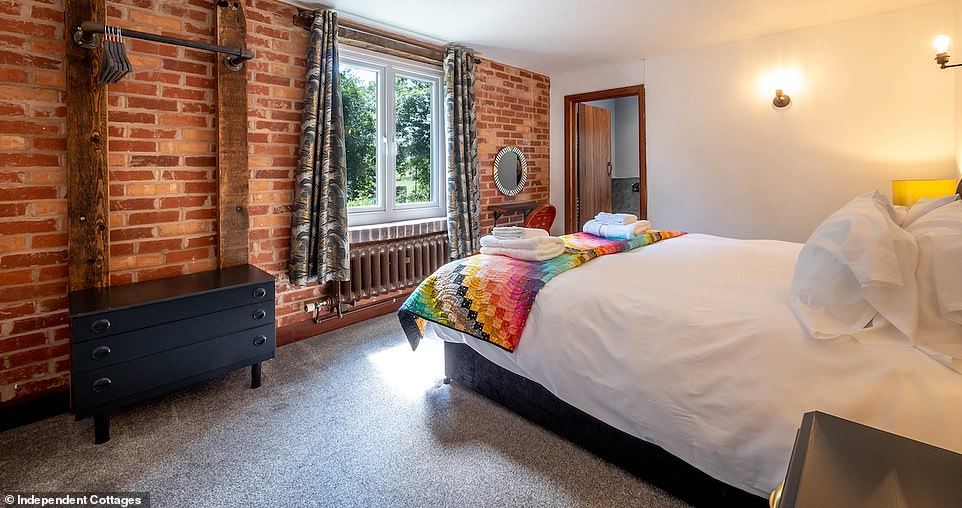 And the 16ft-high wooden cartwheel doors that feature on the Oasis single cover are still in place.

Framed photographs of Oasis embellish the walls, with one showing the Gallagher brothers in the middle of a recording session.

The rental also features an outdoor hot tub on the terrace, which faces the studio’s garden. 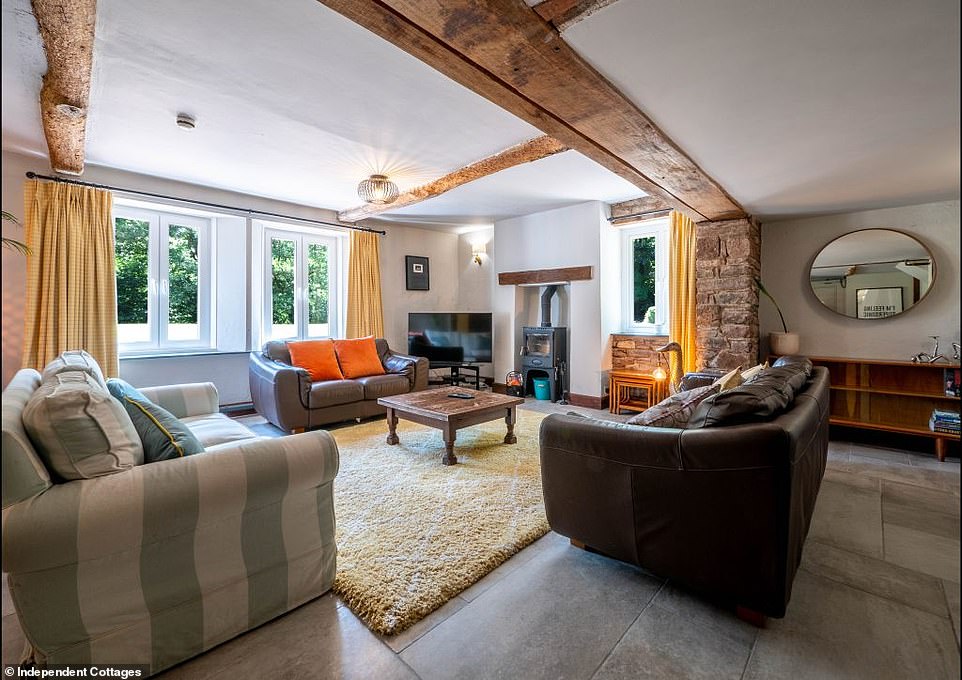 The cosy living room in the house, where guests can curl up on big sofas by a woodburner 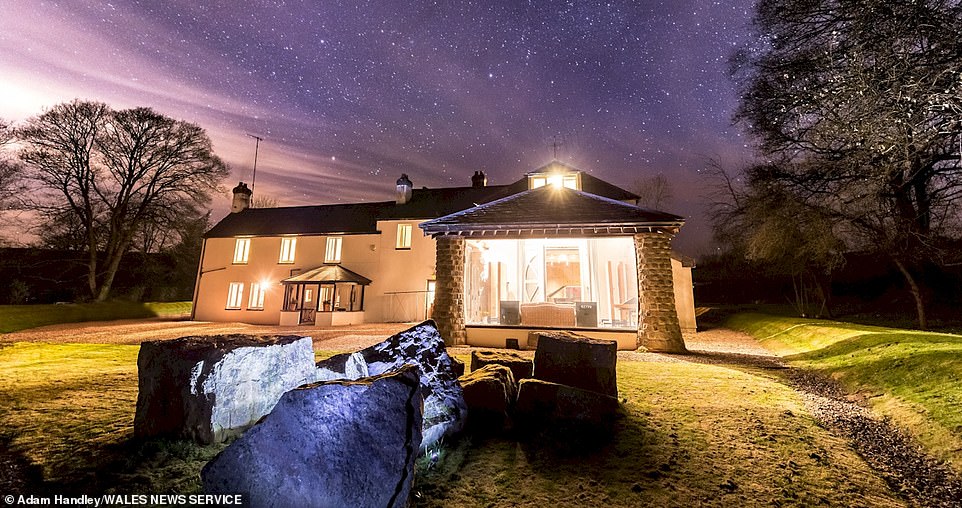 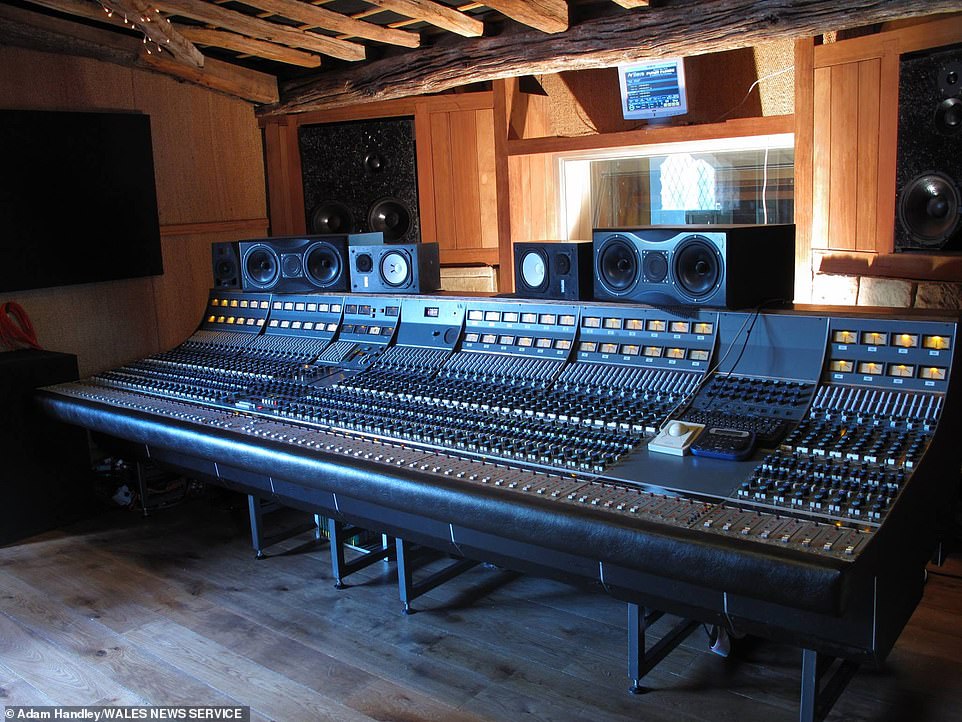 A photo of the recording equipment in the studio, which has been hosting bands since 1975 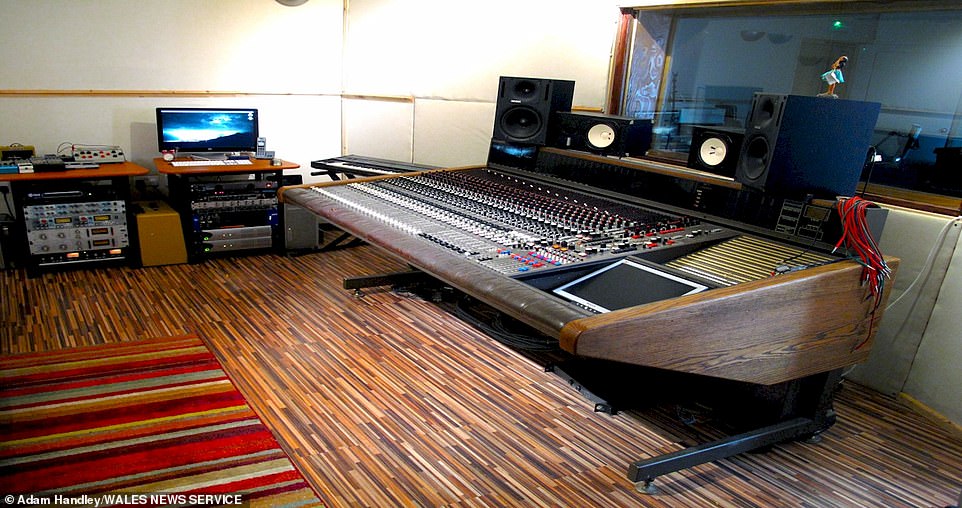 The studio has hosted the likes of Queen, Black Sabbath, and Stereophonics

Visitors are assured that they’ll feel like rockstars as they enjoy meals in the glass-walled dining room, curl up by the log burner or stroll through the private grounds that overlook the Monnow River.

A statement adds: ‘For celebratory getaways, the owners can help you arrange onsite beauty treatments or catering from professional chefs, so you can receive celebrity treatment just like the famous guests from the past few decades.’

Monnow Valley Studio is available to rent from £850 a night, with a minimum three-night stay. For more information, visit independentcottages.co.uk.