Porto straddles the banks of the River Douro, and while it is already a popular destination for people in northern Spain heading across the border, Portugal’s second city is also now catching the eye of British tourists.

After jetting into Porto, it takes less than 15 minutes by road to reach the city centre. But you don’t need to drive or take a taxi – you can take the metro from the airport to Trinidade, Porto’s busiest commuter station. 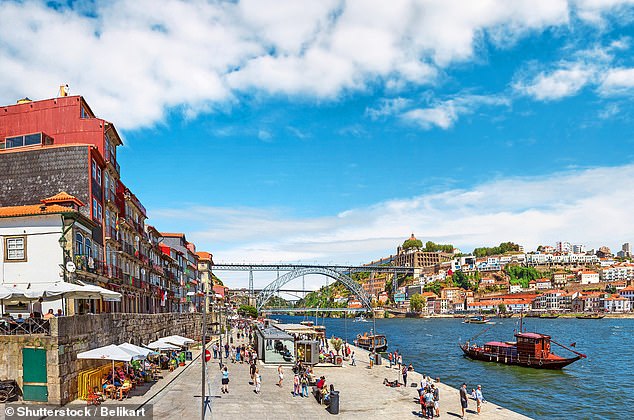 River of gold: The Ponte Luis I bridge straddles the Douro (above)

Begin your visit by admiring the nearby station of Estacao Ferroviaria de Sao Bento. The beautifully tiled walls chronicle everything from battles and conquests to the minutiae of a vintage Portuguese working day, including the daily grind at the watermill or vineyard.

If you’re more into people-watching, make your way to the art nouveau Majestic cafe (cafemajestic.com) on the main Porto thoroughfare, Rua Santa Catarina, and secure a pavement table for coffee and pastel de nata – the famous custard tart that is served at every cafe and restaurant in the city.

You may even sit at a table that was once occupied by J. K. Rowling. She wrote the first chapters of Harry Potter And The Philosopher’s Stone while working as an English teacher in the city in the early 1990s.

Amble along the partly pedestrianised shopping mecca which runs for nearly a mile until you reach the Capela de Almas (Chapel of Souls). Here is another history lesson, where azulejos – the glazed blue and white tiles typical of Portugal – cover the exteriors and depict the life and times of Saints Catherine and Francis of Assisi.

This 18th Century building, however, is a mere whippersnapper in comparison to Se do Porto. The foundations of the city’s cathedral date from the 13th Century. 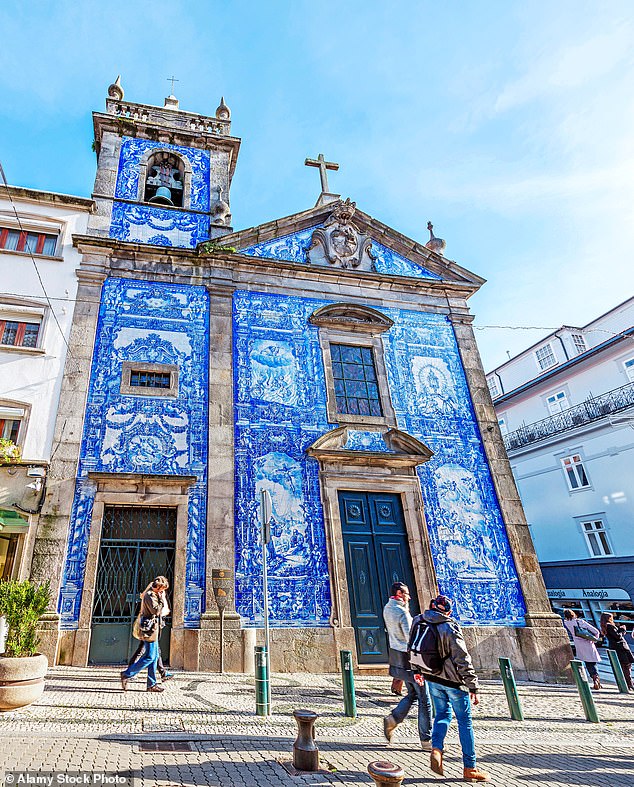 Saintly: Capela de Almas with its decorative blue tiles depicting the lives of St Catherine and Francis of Assisi

Enjoy a post-prandial stroll by following the Douro eastwards until you reach Ponte Luis I. This impressive iron bridge was designed by Theophile Seyrig, a German engineer who was a business partner of Gustave Eiffel, of Eiffel Tower fame.

Cross via the lower or upper deck to get to the other side of the river but watch out for local children performing daredevil dives into the water.

The hilltop Mosteiro da Serra do Pilar monastery is worth a visit, if only for its panoramic views of central Porto.

If you visit the city in spring or summer, the oasis of Morro Garden is the perfect spot to soak up some sunshine before you round off the afternoon on a tasting tour at Calem Port Wine Cellar (tour.calem.pt/#en). The fortified wine does, after all, take its name from the city. 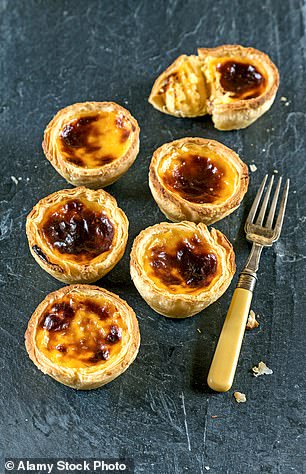 Return to the Ribeira district to take a 1930s tram from outside the church of Sao Francisco along Linha 1 to Foz (do Douro).

Along with Vila Nova de Gaia, this neighbourhood boasts the best beaches in Porto – many have won blue flag awards. The pick of the bunch is Praia de Gondarem. With sand the hue of an ice-cream cone, it’s fitting that the Atlantic waters here are as cold as ice.

As the Portuguese tend to have only a light breakfast, you’ll probably be in the mood for something more substantial for lunch. Find it at In’Vulgar, on Rua Monsenhor Manuel Marinho – despite its name, the restaurant has an appealing menu.

Here they serve Porto’s trademark doorstep sarnie, the francesinha. It’s substantial, with wet-cured ham, fresh sausage, steak or roast meat covered with melted cheese and a hot thick tomato and beer sauce. And you can add a fried egg on top if you like too, all for under €10 (£9).

Hail a cab and travel in style – the majority of Porto’s taxis are Mercedes – to the cultural institution of Serralves in Rua Dom Joao de Castro. Take your time to explore the 1930s villa and contemporary art museum set in a glorious 45-acre park.

Taking a cab is also your best way to reach Casa da Musica (casadamusica.com) on Avenida da Boavista. This is an architectural example of the new Porto – plans for this daringly designed concert hall were drawn up to mark the city becoming European Capital of Culture in 2001.

If you take in a concert, make sure you leave time to squeeze in a nightcap at the Letraria Craft Beer Garden Porto, which serves local and international brews.