The pound has been going through a turbulent time since the referendum in June 2016.

Back in August the exchange rate hit a low of €1.11103 to the pound amid new fears of a Brexit no-deal.

But today the pound seems to be recovering slightly against the euro as UK pay growth hits fastest level since 2008. 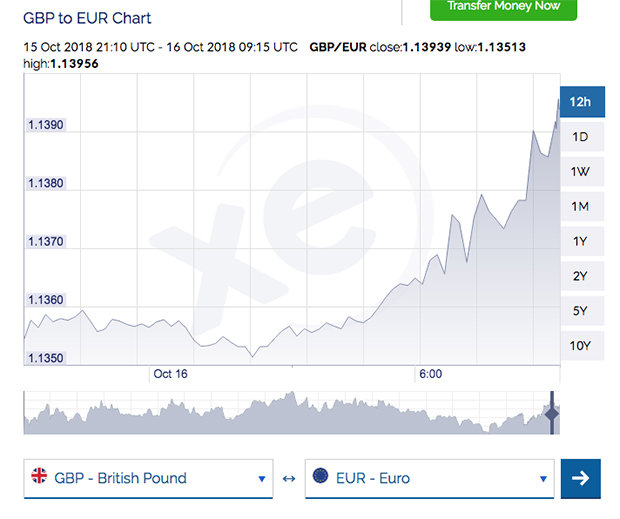 This will come as a relief for Brits who are hoping to holiday in Europe over the Christmas period.

Pay rose by 3.1% in the three months to August, compared with a year ago, while inflation for the same period was 2.5%, according to data from the Office for National Statistics.

“Average pay is now growing at its fastest rate since 2008, and the curtain could finally be starting to come down on the lost decade of stagnant wages.

“With the number of new jobs created flatlining as the economy hovers close to full employment, employers are having to fight harder and pay more to recruit staff.

“But while pay growth is slowly creeping up, the rising cost of living is clawing back much of the benefit for workers – and the average employee’s purchasing power is still £11 less per week than at the pre-crisis peak over ten years ago.

“For the economy to deliver more sustained pay growth it needs an injection of the labour market ‘X factor’: better productivity.”

When should I buy my euros?

The founder of moneysavingexpert.com said Brits might want to hedge their bets by buying half of their currency now and half later.

Martin also revealed an easy way Brits can protect themselves against “currency swings”.

He said: “A few bureaux de change’s terms can be manipulated to give you short-term protection against currency swings.

“These allow you to order for collection at today’s rate, and cancel in up to 14 days’ time.

“That way if the rate weakens you’ve locked in; if it improves you just cancel and buy at the new better rate – it’s a bit like an insurance policy.”