With over 300 days of glorious sunshine each year, glittering seas, and a gorgeous Baroque capital surrounded by defensive walls, Malta is an island that knows how to make an impression.

One of the sunniest spots in Europe, this Mediterranean island has seen everyone from the Phoenicians to the Romans, the Arabs, Ottomans and the British march through, with each culture leaving its mark.

The result is a country with the most historic sights per square mile, from forts and palaces to ancient temples and where each small city is like an open-air museum.

Add in the stunning coastlines washed by waters of a brilliant blue, hiking and biking trails, and gastronomy that reflects Malta’s storied history, and you have an exotic island experience just a three-hour hop from the UK. 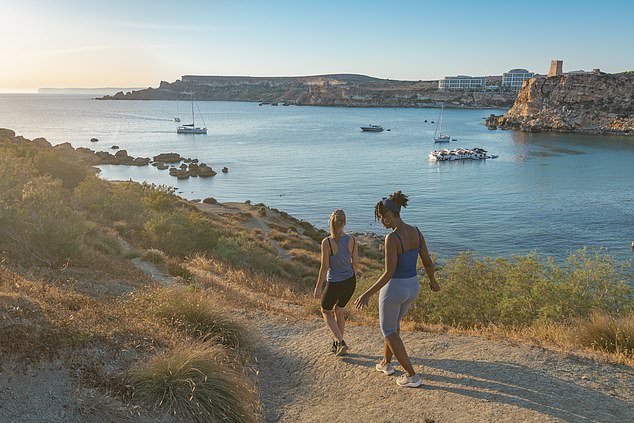 Once the heat of the summer has passed in Malta, you’re left with sunny days and mild temperatures, perfect for getting out and exploring on foot.

The coast and countryside are laced with well-marked trails for every level of walker. Some dip down to beautiful bays and hidden coves from meandering clifftop paths offering spectacular views, while others offer the chance to explore the island’s heritage.

The Watch Towers Walk takes in forts that date back to the Knights of St John and defensive structures built during World War Two, while the Maqluba Walk follows country lanes to pretty villages of narrow streets and rural churches.

Don’t forget to hop on the ferry to bijou Gozo, just off the north-west coast of Malta. In just 25 minutes, you arrive on an unspoilt island, where life ticks along at a slower pace and activities like hiking, biking and kayaking are complemented by delicious local wine and cuisine. 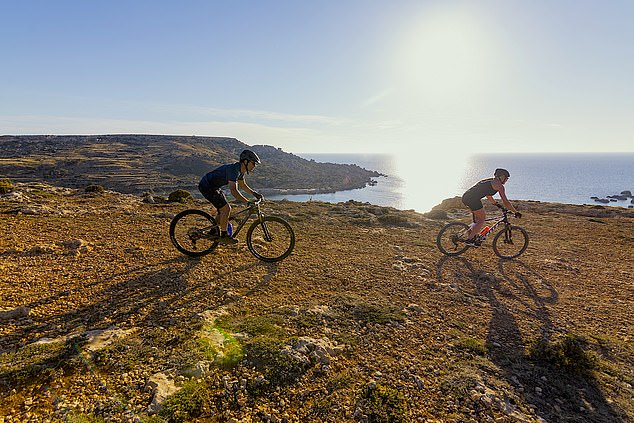 Head to Gozo where activities like hiking, biking and kayaking are complemented by delicious local wine and cuisine

Follow the Xaghra Heritage Trail and marvel at the megalithic temples of Ggantija, dating back to between 3200 and 3600BC, and considered some of the oldest freestanding monuments in the world.

Or set off from the pretty capital Victoria on the Saltpans Walk through the countryside, past the island’s oldest basilica to the chequerboard of the Xwejni Salt Pans, where mounds of gleaming white salt dry in the sunshine by the sea.

You can even dart across to Comino, the third island of the Maltese archipelago, where you can hike from the gleaming waters of the Blue Lagoon and spot birdlife ranging from turtle doves to cuckoos and kestrels to warblers.

In the warm winter sunshine, hiking is one of the most enjoyable ways to explore the islands at your own pace.

Step back in time

When the Knights of St John arrived in Malta in the 1500s, they needed to protect themselves from the Ottomans.

As well as building a series of coastal forts you can still explore today, they also built the city of Valletta on a peninsula surrounded by water on three sides and overlooking a deep natural harbour. The result is a pretty capital of winding streets and Baroque buildings of honeyed stone, embraced by sturdy city walls. 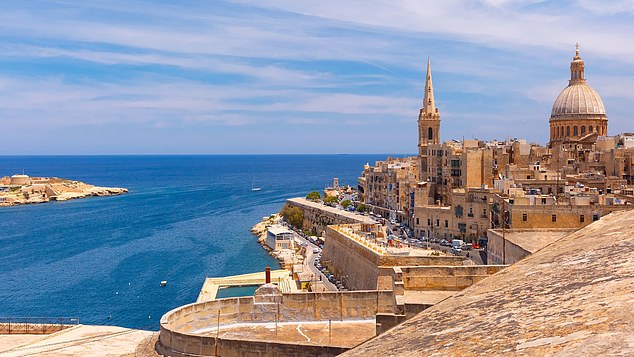 Valletta is a pretty capital of winding streets and Baroque buildings of honeyed stone, embraced by sturdy city walls.

The Knights of St John wanted ‘a city built by gentlemen for gentlemen’, and today Valletta feels like an open-air museum, described by UNESCO as one of the most concentrated historic areas in the world.

You can stroll from the ornate Grandmasters Palace, with its rich tapestries and painted ceilings, to see Caravaggio’s The Beheading of St John the Baptist at St John’s Co-Cathedral (twinned with St Paul’s Co-Cathedral in the ancient city of Mdina). 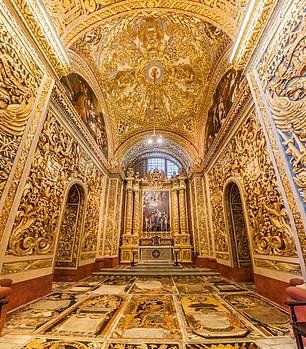 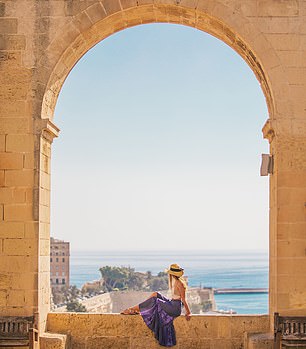 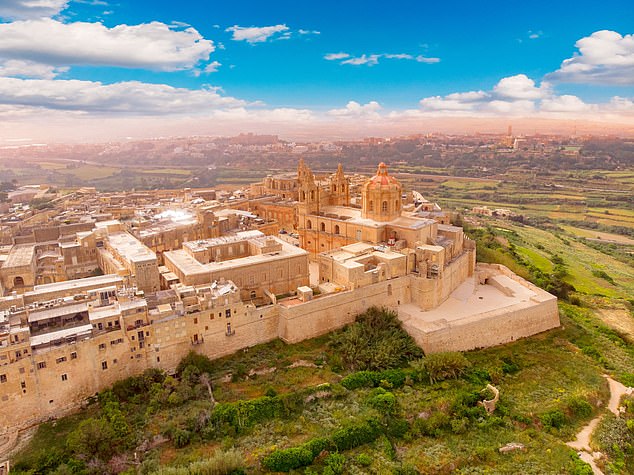 Mdina, known as the Silent City, was once Malta’s capital

Don’t miss the views from the Upper Barrakka Gardens atop the city’s bastions, or the modern addition of the City Gate, designed by Renzo Piano, the architect behind London’s Shard.

Valletta wasn’t always Malta’s capital, it was once atmospheric Mdina, known as the Silent City. Set atop a hill, this Arabic citadel is a tangle of medieval streets lined by palaces and noble houses, with a honeycomb of tombs below all waiting to be explored.

Step even further back in time at the UNESCO-listed Hal Saflieni Hypogeum, a three-storey prehistoric necropolis below ground, where passages and chambers were cut from the rock by the Temple people more than 6,000 years ago. 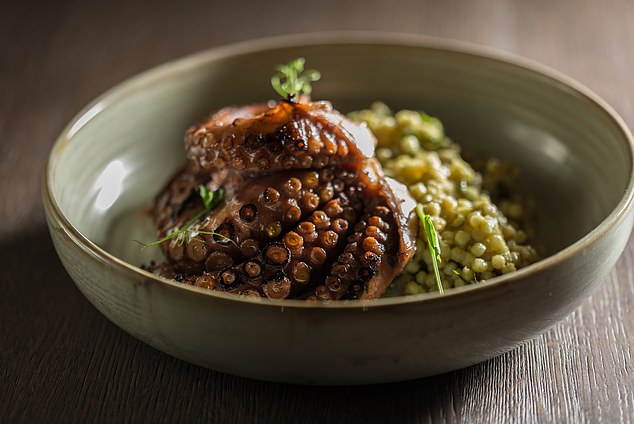 With its mix of cultural influences, Malta’s gastronomy is a mouthwatering blend of flavours.

On both Malta and Gozo, you can explore historic vineyards, dine on fresh fish and enjoy dishes that include a twist of Arabic, Sicilian and even French ingredients.

Soak up the bustle of Marsaxlokk fish market on a Sunday morning, and make sure you try the national dish of lampuki pie (fish pie). Maltese-style ratatouille is called kapunata, while rustic bread stuffed with tuna, onion, garlic, tomatoes and capers is known as hobz biz-zejt.

Then there are the sweet desserts. From Sicilian-influenced kannoli, a crispy pastry filled with ricotta, to Arab-style helwa tat-tork, a sort of fudge made with almonds and sesame paste, you’ll delight in every mouthful. 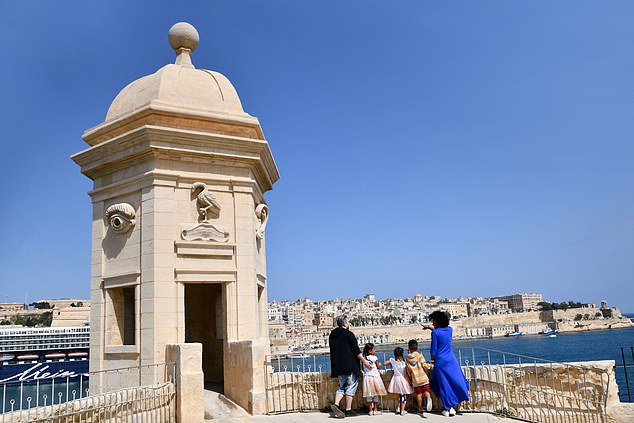 Head to the beautiful patio restaurants by the Grand Harbour in Valletta and enjoy the warmth of the midday sun as you enjoy fresh fish and sumptuous views.

Or try the city’s historic limestone houses-turned family eateries, where you’ll enjoy traditional dishes infused with the character of your unique setting.

In the evening, bars spill into the cobbled streets, and you can find wine cellars serving up local vintages that are holding their own against their Old World neighbours in international competitions.

You only need your vaccine certificate to enter, and the archipelago is also the most vaccinated country in the EU.

So whether you want to explore on foot, tuck in to delicious dishes or simply soak up the atmospheric cities and cultural sites, Malta has everything you need in one Mediterranean destination.

Book your getaway to Malta now with British Airways, who are offering four nights at The Saint John Hotel from £299pp – return flights included!*