NEW YORK — It was a long time coming, but Virgin Voyages’ first ship, the Scarlet Lady, has arrived in New York City, where it will play host this week to members of the press, travel advisors and a music festival headlined by DJ Lazer.

Virgin founder Richard Branson was aboard the ship on Tuesday, walking the decks with Virgin Voyages CEO Tom McAlpin. The Scarlet Lady had been operating in the U.K. this summer on domestic cruises open only to U.K. residents and is now making its way to Miami for its first cruise from Florida on Oct. 6. 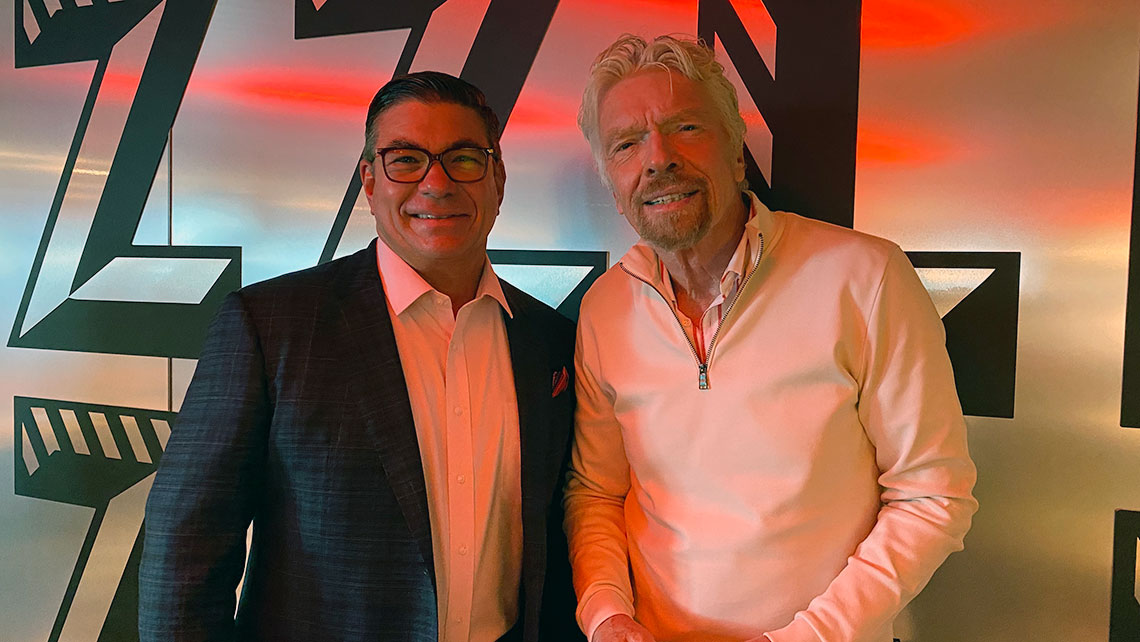 The Scarlet Lady was originally supposed to make this trip in March 2020, but the unfortunate timing of the Covid-19 pandemic meant that the new ship had zero passengers in its first 15 months of existence.

The Virgin cruise product is unique — the ship has no cruise director, no buffets and no main dining rooms. Among its signature spaces are a tattoo parlor and a record shop. 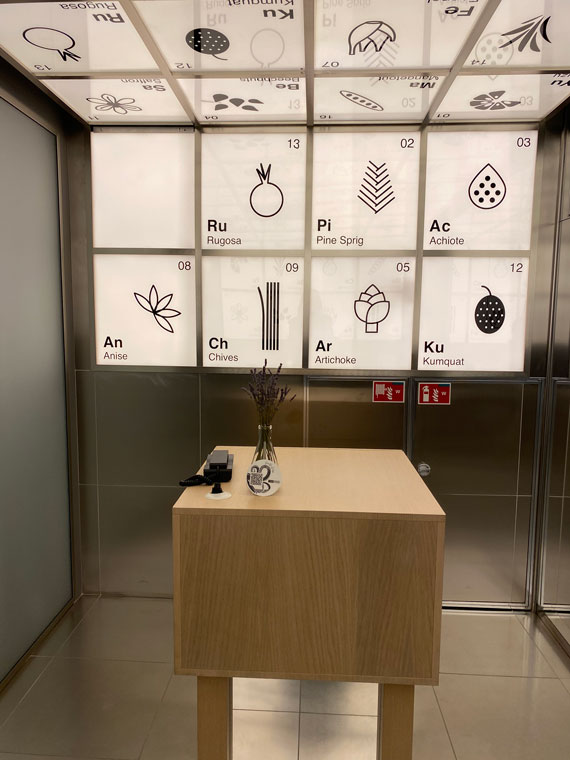 Perhaps because Virgin was so many other things before being a cruise line — a record label, an airline, a hotel brand — it takes its nautical positioning very seriously.

Chris Stubbs, Virgin’s head of sailor and crew experience (Virgin calls passengers “sailors”) said that in almost every space, there are views of the sea. His favorite eatery is Dock House, which he called a “shippy space” with a Mediterranean Sea style that matches the flavors of the food it serves.

The Loose Cannon Social Club is inspired by seaside bars in the English city of Brighton and serves fun food like hot dogs and “indulgent kid treats,” Stubbs said. There’s table games like foosball and an arcade with throwback video games that on an adults-only ship won’t be crowded with kids.

When passengers embark the vessel in the roundabout, it is purposefully designed so that they see the sea across the ship.

The line’s signature beer, served at the Draught Haus, is called Stray the Course. Razzle Dazzle, its vegetarian-focused restaurant, is named for the ship camouflage used in World War I and World War II to confuse the enemy as to which direction a ship was headed.

There are very few large spaces on the Scarlet Lady, an intentional design feature so that with 2,700 passengers onboard, the midsize ship offers a feeling of intimacy in its venues. Stubbs said the bars and restaurants feel more like ones you’d visit in a city rather than “massive dining halls” on many cruise ships. 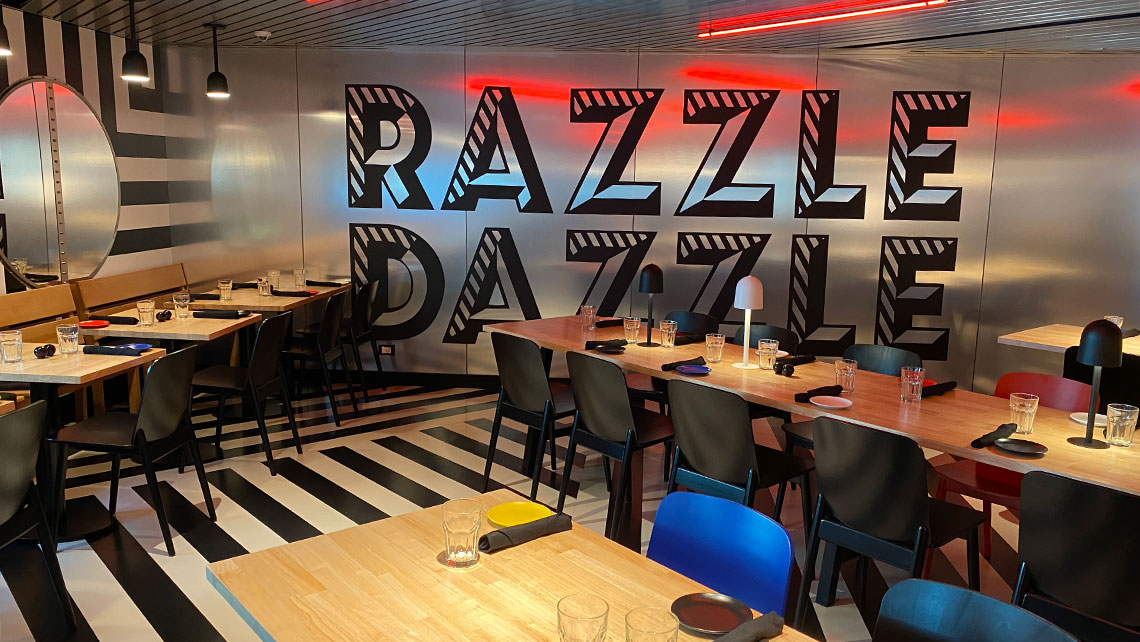 Several of the eateries, all of which are included in the cruise fare, are unique. The Test Kitchen’s menu will tell you what the dish’s ingredients are, but now how it’s prepared. Razzle Dazzle’s color scheme and design is “a sensory delight,” said Stubbs. Although the menu is vegetarian-forward, if passengers know whom to ask, a secret menu just might have a steak on it.

Gunbae may be the first Korean barbecue restaurant on a cruise ship, and Virgin said it’s the only one where passengers do their own tabletop cooking. Its Mexican eatery, Pink Agave, has a mezcal library.

Virgin had sworn off buffets long before Covid put them on notice. Instead, for quick and casual eating, the Scarlet Lady offers the Galle, which is modeled after a food hall and has stations serving burgers, tacos and noodles. Diner and Dash serves breakfast all day. Each spot in Galle cooks to order, Stubbs said. 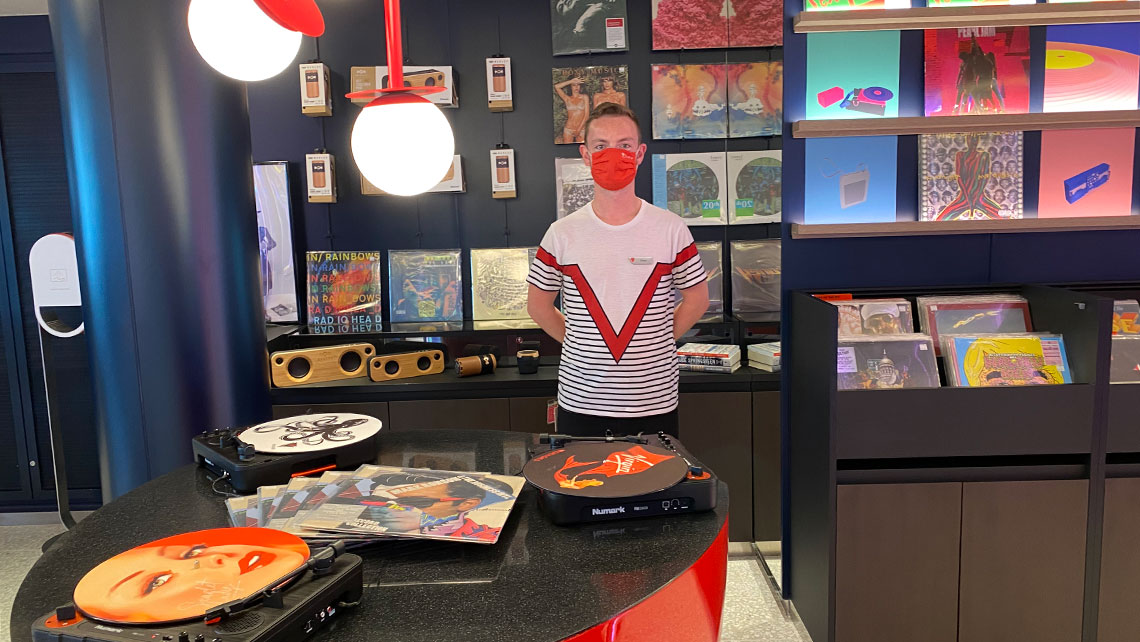 A record shop on a cruise ship might seem like a gimmick, but on the Scarlet Lady it has meaning, one that’s evident in the album most prominently displayed, the Sex Pistols’ “Never Mind the Bollocks, Here’s the Sex Pistols.” It’s the only studio album by the English punk rock group and the record that Richard Branson credits with putting Virgin Records on the map, said Owen, the record store manager.

“If not for that album, there would be no Virgin cruise ship,” he said.

Record sales in the Voyage Vinyl shop have exceeded the ship’s expectations, and Owen said that record players sold out in the U.K. and that the shop needs to restock its vinyl collection, which was depleted during its summer sailings. 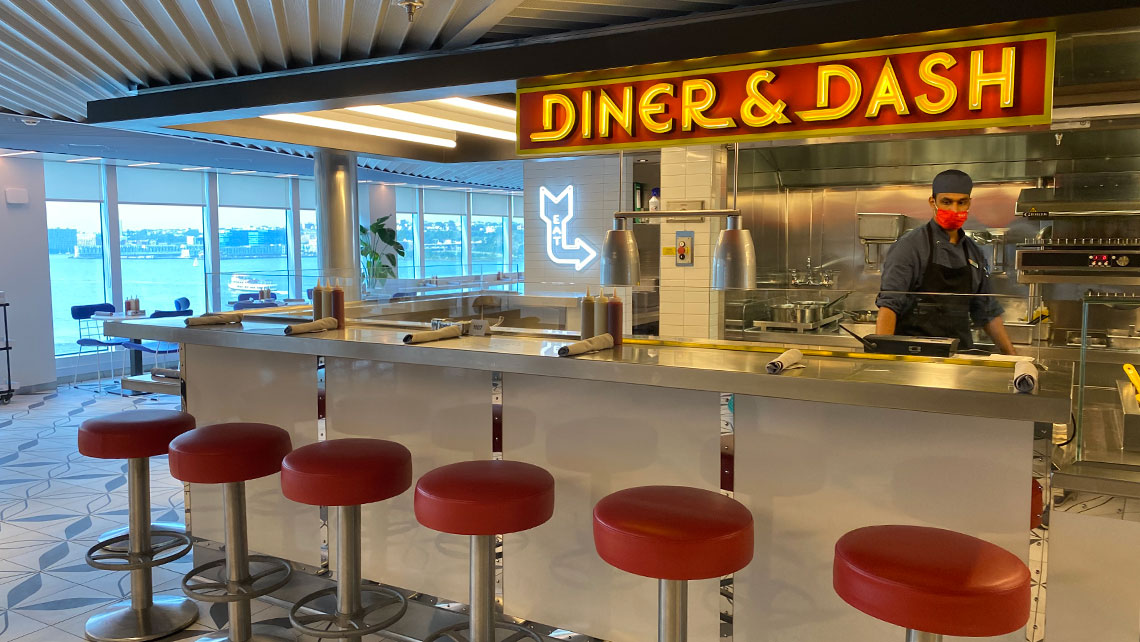 Vinyl aficionados might want to get a jump on the limited edition Never Mind the Bollocks album on display — there are only 1,000 copies, and the Scarlet Lady is the only place on earth to purchase one, for $77.

On the other super-hyped space onboard, the Squid Ink tattoo parlor, passengers this summer mostly opted for custom designs. Not surprisingly, many were inspired by the sea and nautical themes.

Quite a few passengers have walked off the Scarlet Lady with a permanent memory of their cruise: an anchor, mermaid or compass tattoo.