Airports, for most travellers, tend to fall into two categories. The first is the shoot-me-now domain of the budget airline, where passengers are kettled into pens akin to those found in a knacker’s yard.

The second is the not-as-smart-as-it-thinks international hub. This is a place where rush-hour crowds, a dire lack of seating and offensive coffee see you trot to the gate as fast as possible. The less time spent in these vacuous, cookie-cutter hangars, the better.

But – wait – there is a third. A holy grail game-changer, with easy-on-the-wallet street food, custom furniture and vernacular architecture. And Changi Airport, on a spit of reclaimed land in Singapore, claims to be such a utopia. Here, I’ve heard, it’s not uncommon for fanatical locals to spend all weekend eating, drinking and shopping without once leaving the mall-like hive of terminals. Weird, right?

I have to know it for myself. I have a 48-hour layover in Singapore coming up, so instead of going into the city, I’m going to have a holiday in the airport, from Saturday (when I arrive) through to Monday morning.

Departures level, a little bleary-eyed from an overnight flight, and I’m zipping to T3 on the Skytrain, a landmark monorail that shocked everyone as Asia’s first driverless train when it opened in 1990, and now ferries passengers between the terminals. We whisk past Changi’s latest madcap attraction; the Jewel, a new, S$1.7b terminal-in-progress that’s due to open in 2019. Once finished, it will house a hedge maze, 130ft waterfall, tropical canopy walkway, and “indoor clouds”. Barmy? Even Singaporeans think it’s nuts.

Indoor clouds are just the start here at the world’s sixth busiest airport. Eyeing the airport diorama on the public concourse, it’s clear the razzamatazz is relentless. A fourth terminal, with a walk-through street of fake Peranakan shophouses, is due to open in October. Terminal 5 will arrive in 2020. 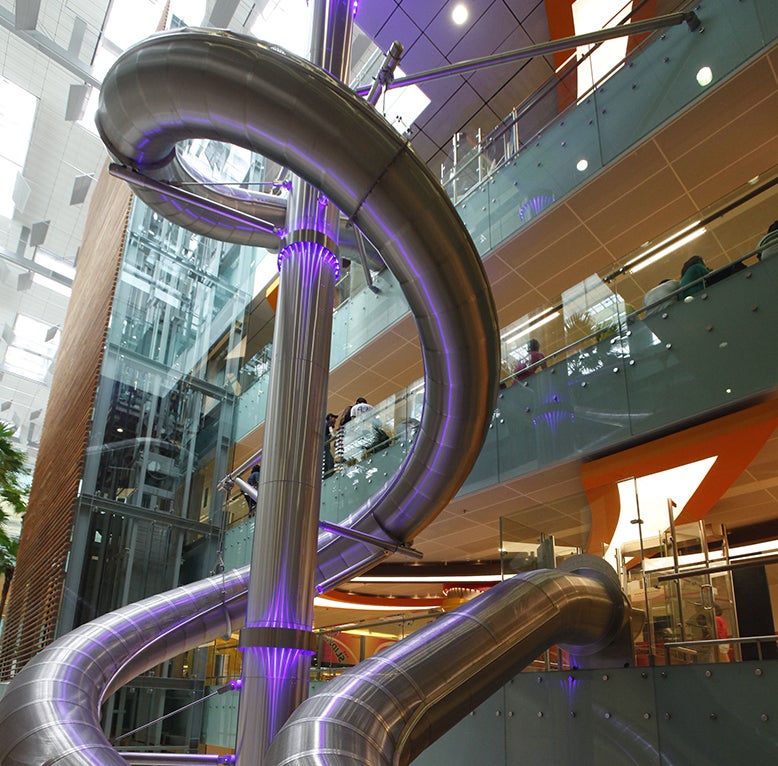 To get from here to an early lunch, I experience the first of Changi’s marketing brainstorms: a ride on the world’s tallest airport chute, the [email protected] (free ride for every £5 spent). It’s a fun diversion, yet little more than a novelty, a six-second fart down a 12m-high tube, shuttling me from one floor to the next. Still, the kids seem to love it.

Singapore fosters one of the world’s great street cuisines, and for many its symbol is the steamed bun. The xiaolongbao is the staple of dozens of hawker dishes, so I plump for an early lunch at Sino-French lovechild Paradise Dynasty in the T3 public food court. Here, the menu fuses the traditional bun with cuckoo-crazy flavours – crab roe, cheese, garlic, foie gras, and the restaurant’s signature, black truffle. I order the lot (£15 for 8) and instantly regret it. 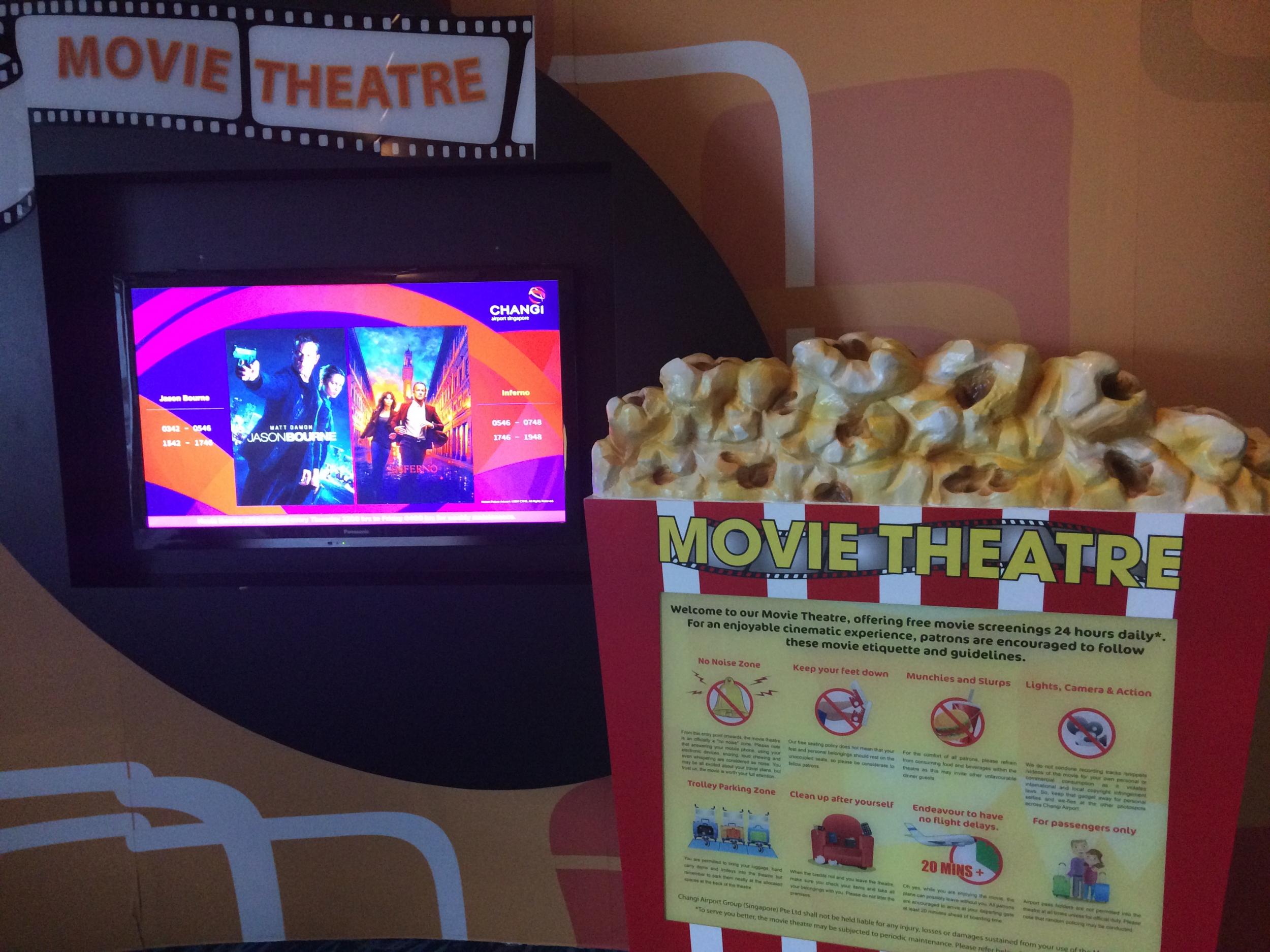 In a post-dumpling sweat, and through immigration and security, I seek-out the free 24-hour transit cinema to hunker down; an easy win to pass a couple of hours. Ben Hur is on, and it’s epically disappointing. 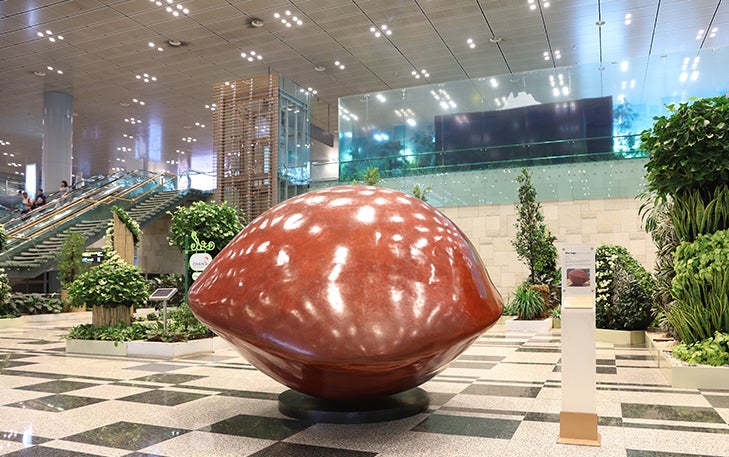 My mood brightens at Changi’s Butterfly Garden in the T3 Transit Area. It’s a curious thing to hear the buzz of 1000-odd fruit-feeding butterflies at the same time as the growl of jet engines and the gush of a cascading waterfall; more so when the cocoon cages are prised open so passengers can see the chrysalises up close. One man takes a selfie for Facebook: “Me and a Western Pygmy Blue, chilling at Changi.”

It’s now deep into day one and I haven’t even considered a fish pedicure. Still, at the Wellness Oasis, pocketed in the underbelly of T2, the thought of tiddlers nibbling the skin off my toes (£13.50, 30 minutes) does little to distract me from one simple fact: I still have almost 36 hours to go.

Around this time, I begin to crave meaningful conversation, so detour to the nearby Whiskey House, a leather-and-lamps club on a mezzanine above the mammoth duty free shop.

“Take a seat,” the barman suggests, pouring out a spectrum of top-shelf drams. It’s a solid gold guarantee of missing a flight, yet I drain five, staying long enough to discover the secret stash beneath the counter. “These are only for the big spenders,” he says with a wink, producing a £400 bottle of peaty Macallan. “How about one for the road?” How about a double, I say. 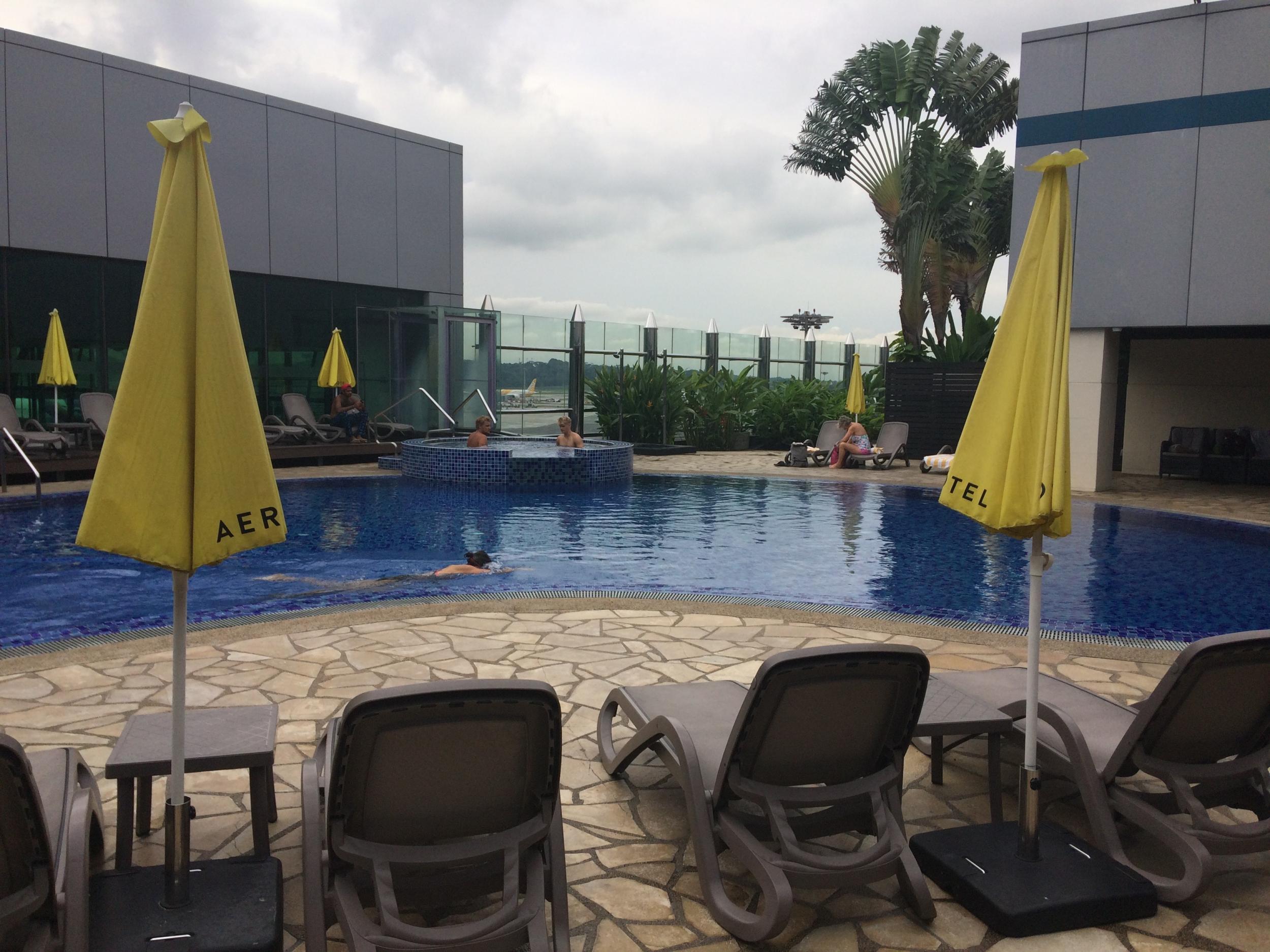 So here I am, still: oblivious to the thousands of passengers who’ll fly into the night, drinking a vintage single malt, in a haze that’ll hopefully see me through to tomorrow. I stagger along the emptying corridors back to my hotel, not really knowing what day or time zone I’m in. The Aerotel Transit Hotel in T1 is Asia’s first passenger transit hotel, complete with rooftop swimming pool, gym and Jacuzzi. Rooms are bookable by the hour – a six-hour stint costs around £60.

In the cold light of day on the T2 concourse, it’s feeding time at the Koi Pond. The orangey-silver fish skim the surface to a crowd of wide-eyed infants, who ooh and aah as bubbles pop the surface. “Relax,” the attendant says pointedly to me, perhaps noticing my puffy eyelids and heightened stress levels. He has a point: having long checked out of the hotel, I find myself back in the transit zone far sooner than I’d like. “The koi have all their teeth removed,” he continues. “They don’t bite.” I think, it’s time to move on.

I could go shopping – Changi is teeming with outlets, including places like Bengawan Solo, where you can buy stinky durian cake (from £8). But like most airport shopping, it’s a mix of the unaffordable (Michael Kors) and the unappealing (McDonalds). Instead, I follow the “Art Appreciation Trail”, a series of a dozen or so blink-and-you’ll-miss-them installations, and ponder a bubble dog in the style of Jeff Koons.

Existential crisis looming, I seek out the Cactus Garden. It rewards the creeping claustrophobia of the airport with runway-fresh air, a bar purveying judgment-free mid-morning beers, and an ark’s worth of prickly pears, aloe vera and dragon trees. 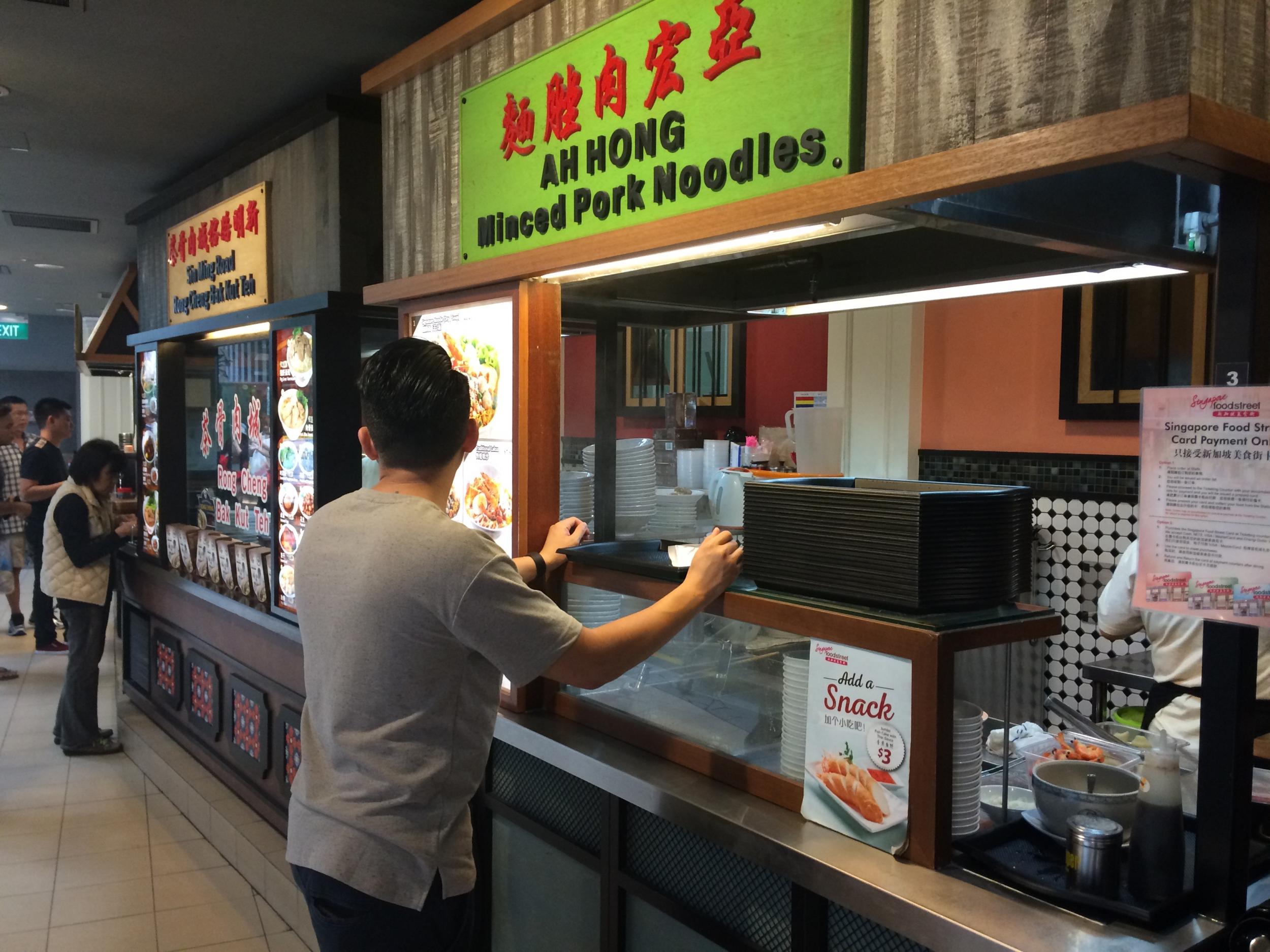 Before I can eat, I’m going to have to work out where. The airport lists around 140 restaurants, and at “Singapore Food Street” in T3, I find a line-up of hawker stalls – that quintessential Singapore experience, only rather more upmarket. I opt for barbecued stingray from Tak Shing BBQ (£8), a disappointing leathery slab of fish.

I’m using what I’m enthusiastically told by a janitor is the “world’s best airport toilet”. I watch a plane taxi onto an airbridge in front of a panoramic, floor-to-ceiling window, then let it all hang loose and have a strangely enjoyable pee. 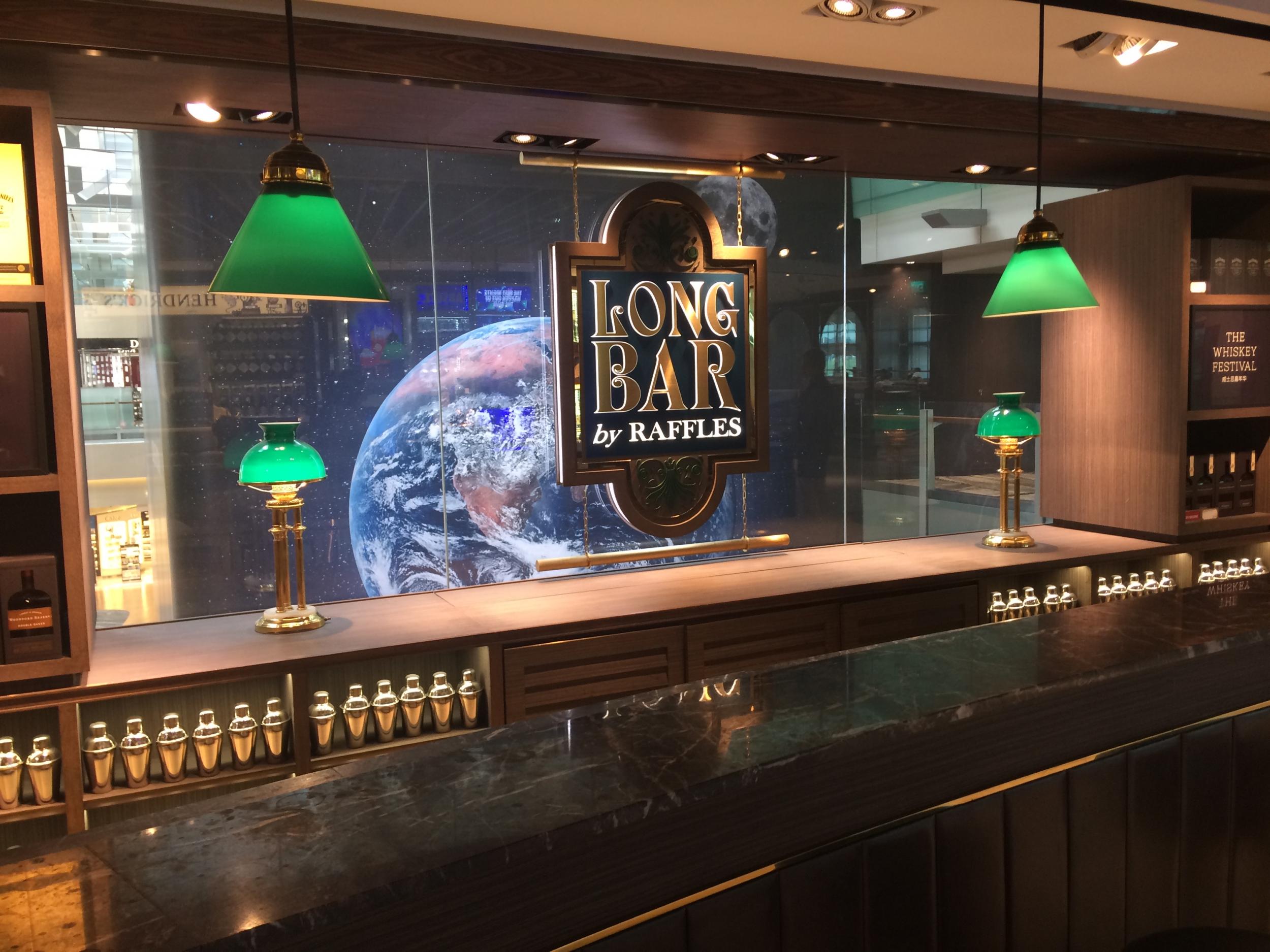 Now what? To return to the Cactus Garden? Or revisit the slide with my remaining token? On the advice of my new airport chums, I try to score a free Singapore Sling, the ultimate symbol of the country, at the sublimely ornate Raffles House Cocktail Bar in T3 – I’ve been told that Changi’s “hidden secret” is that every passenger is entitled to one – but hopelessly fail.

“No purchase, no free drink,” I’m told. So much for rewarding my airport loyalty.

Instead, I hustle my way into the Ambassador Transit Lounge (£33) and strap in for a final few hours, underlining the fact that to have a really good time at Changi – as at any airport – you need to spend far more money than you’d like.

At last, my flight blinks onto the departures board and I flop down at the gate. Before I’d arrived in Singapore, the cliche I’d heard was that it was sanitised, sterile, conservative and boring. Changi clearly didn’t get that memo.