There are few sights more impressive than Bali’s Mount Agung as it stands today, with its magnificent 3,000m peak tripled in size by billowing black smoke.

I’d been planning to come to Bali for a work trip since September — it was then that the volcano which has been asleep for half a century or so started its rumbling. I watched the news, feeling for the residents of Mount Agung, evacuated by their thousands, away from their livelihoods on fertile farmlands to makeshift accommodation in areas just outside what would be the danger zone if something were to happen.

It wasn’t just those in the immediate vicinity who lost out. Bali’s beautiful hotels lost panicking customers, who cancelled holidays. Friends who lived on Bali told me it was the foreign media whipping up the drama, and it was likely nothing major would happen for months. The authorities raised the alert to its highest, and as social media conveyed a little hysteria over what was actually a bit of a non-event, the government then dropped the warning down again — perhaps, partly, as the economy was tanking, with an estimated £100m loss of income to the island. So I booked my trip.

I landed on Saturday, just as flights from Australia were being cancelled. My friend Wayan picked me up and explained the volcano was finally flexing his muscles. As we headed towards Seminyak, one of the most popular resorts, it did seem uncharacteristically quiet — but then again, it is low season, and my hotel, once I got there, seemed full.

Since I was due to head north – towards Mount Agung – on Sunday, I messaged a few local friends who all seemed blasé and unconcerned that I would be moving in the volcano’s direction. As we drove up through the winding mountain roads there was heavy rain; it was hard to tell if the fog around Mount Batur, the dormant neighbour, was amplified from the smoke from active Agung. The radio was playing 1980s classics with no out-of the-ordinary announcements. I asked our driver if I was crazy to be heading towards the volcano, but he seemed confident it was no big deal. 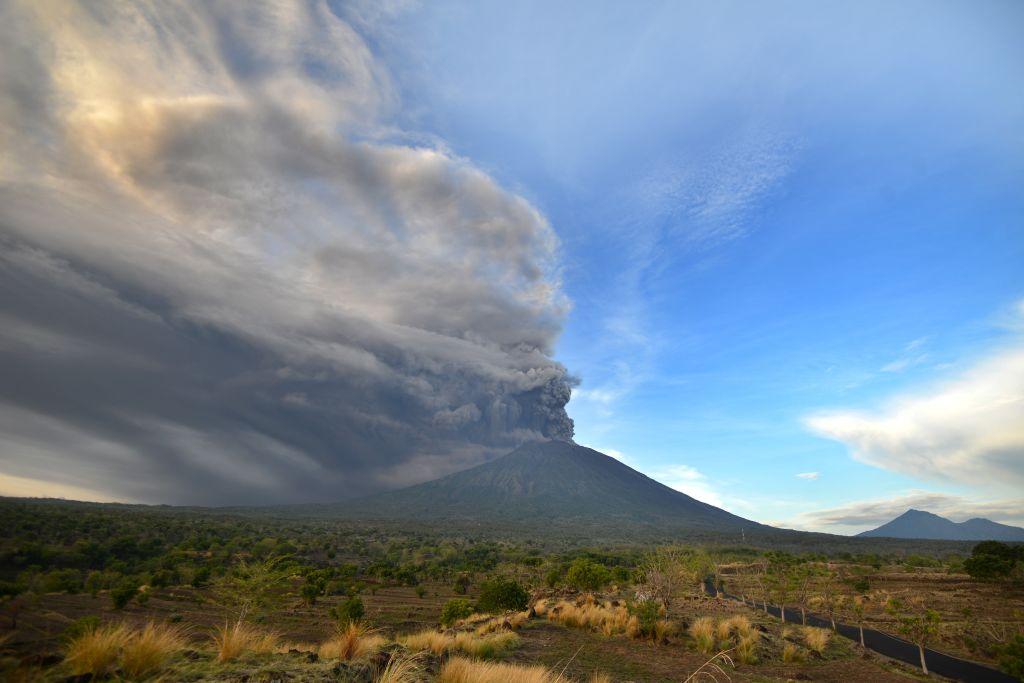 Now I’m up in Tembok, 21 km east of Agung — and it’s incredibly peaceful, if I’m honest. There are no signs at all that anything is awry — except for the constant ping of messages from people watching the news back home, picturing me in a Pompeii-style situation. The only change I’ve noticed is that instead of chocolates on my hotel room pillows today, there were flimsy disposable masks — though I can’t see them being much use in an emergency. A friend in Manggis, on the east coast of the island, messaged me to say they’re having to clear up a little ash, but otherwise all is well.

Last week I heard there had been a “phreatic splutter” — a burst of steam rather than the serious magma action. But over the last two days, the talk of lava rivers all seems a bit more real. Today, I even had to google what “cold lava” (also known as lahar) is, having heard a rumour that it might start seeping into rivers.

But otherwise, it’s business as usual. Today, a group of us took a boat around the coast to get a better view of the volcano, which our friends thought was brave of us but the fishermen out in the calm waters didn’t bat an eyelid. What we could just about see when we were out on the water, just under 10 miles from Agung, was the extraordinary sight of smoke billowing around it, dwarfing the island landscape.

The biggest challenge right now is the spanner in the works for anyone trying to fly out, as the airport is teeming with the victims of cancelled flights. Some friends of mine who flew in for the weekend from Singapore are grounded – a nightmare for one of them who’s seven months pregnant.

But as someone who was stranded in Thailand during the Icelandic ash cloud over Europe, I’ve learned to just roll with the punches when it comes to travel. To be honest, I’m more gutted for Bali’s economy than my own plans. Tourism is an essential part of their revenue, and I can only hope that if tourists like me end up being stranded here longer than planned, we can support local business at a time when they really need it.

That may seem flippant when an imminent large-scale disaster could be happening any minute, but I’m fairly confident they’ve predicted the worst case scenarios.

So am I annoyed to be stuck here? Not at all. From a tourist’s point of view, it’s an inconvenience more than anything else. And if I had to be stranded on holiday, I can think of worse places to be.